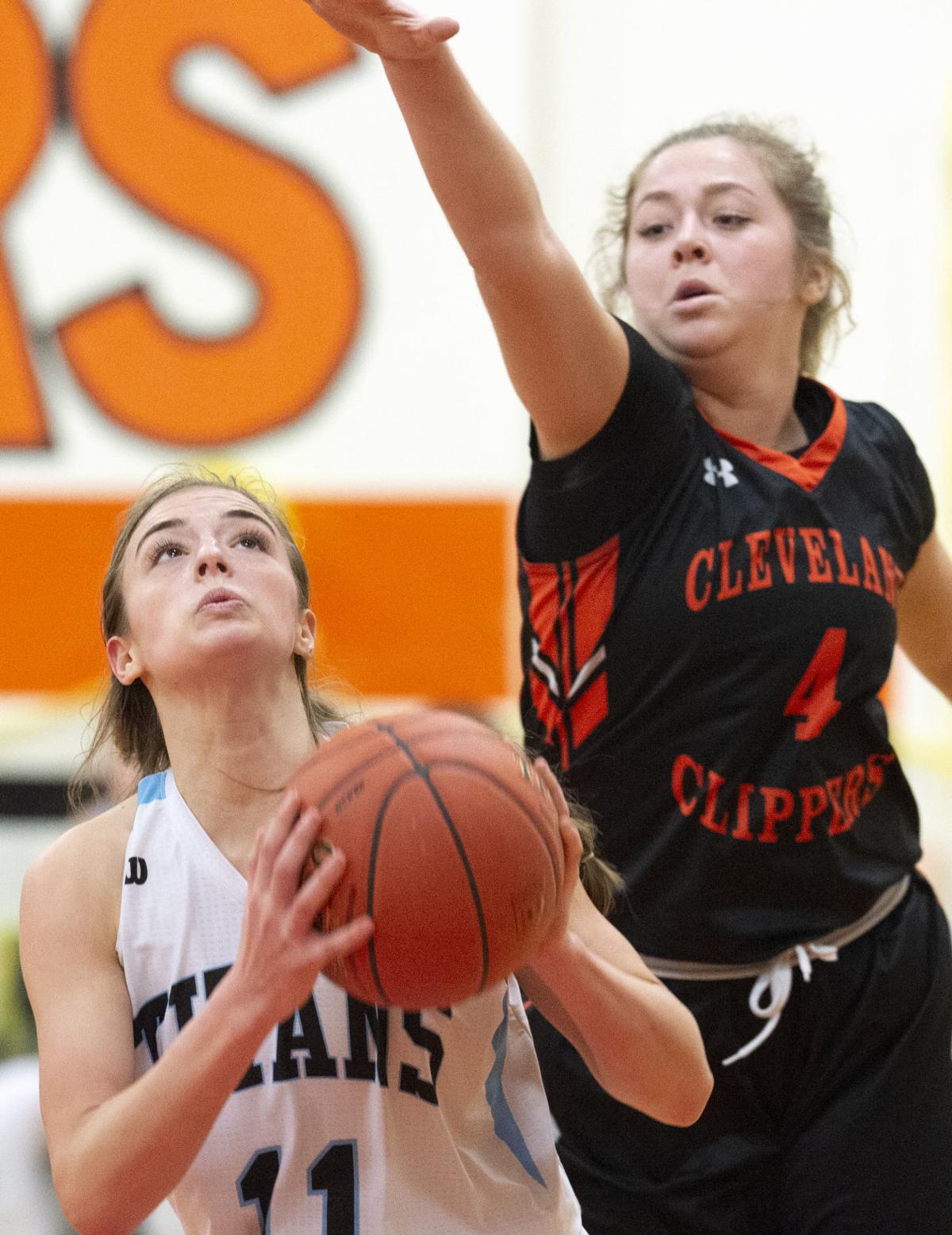 Cleveland’s Emmie Dittmar extends an arm in attempt to block the shot of TCU’s Grace Factor during the Titans’ 79-48 win over the host Clippers on Friday. (Richard Rohlfing, Le Sueur County News) 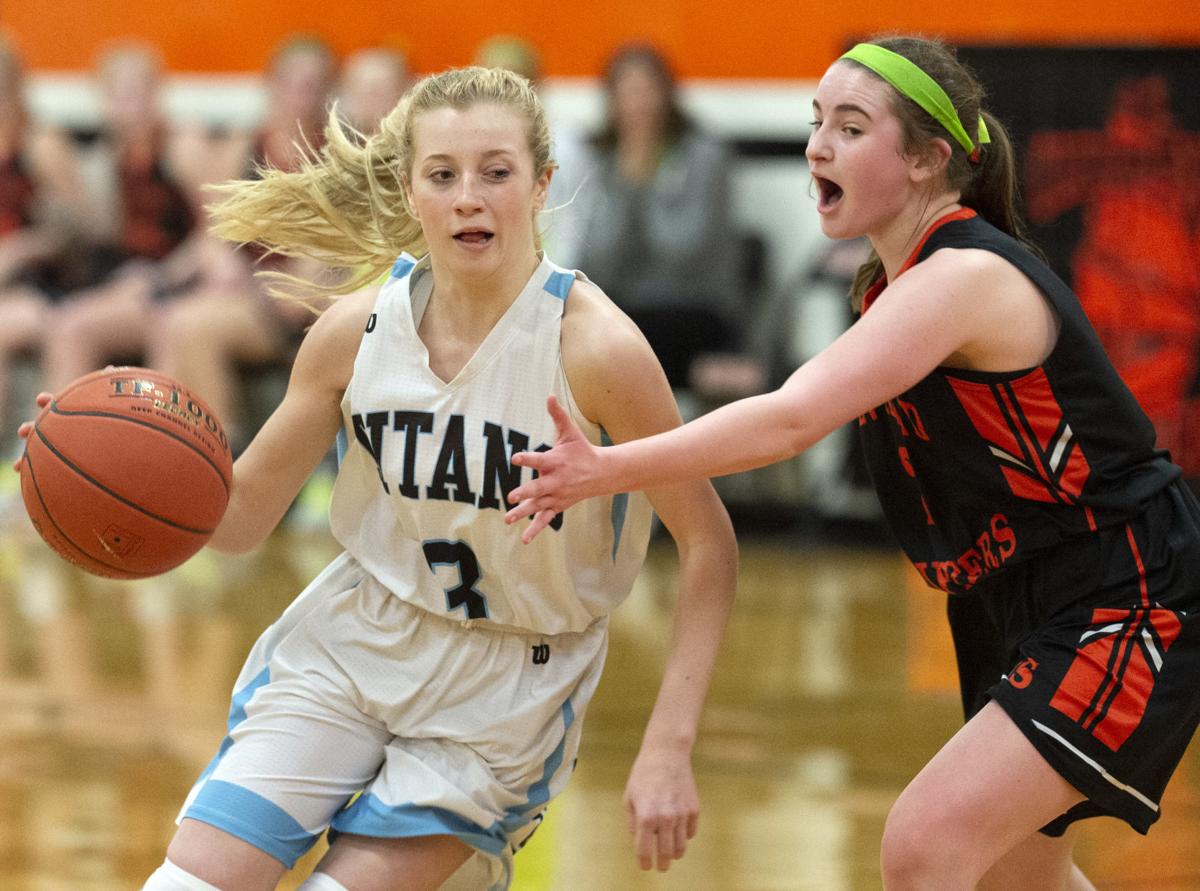 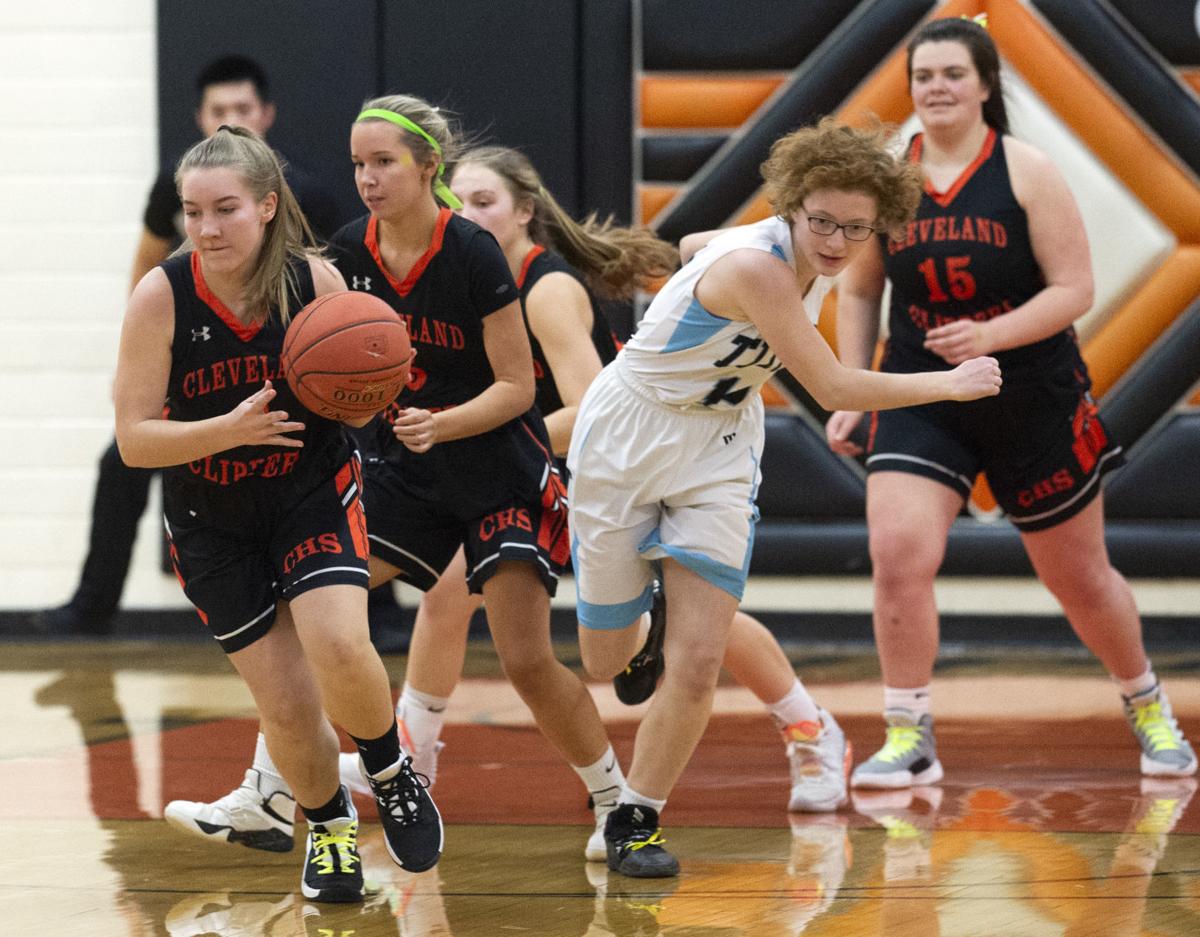 Cleveland’s Micah Peterson heads down court late in the second half. Behind her are teammates Serena Williams and Kallie Phillips and TCU’s Sydney Whiteis. (Richard Rohlfing/Le Sueur County News)

Cleveland’s Emmie Dittmar extends an arm in attempt to block the shot of TCU’s Grace Factor during the Titans’ 79-48 win over the host Clippers on Friday. (Richard Rohlfing, Le Sueur County News)

Cleveland’s Micah Peterson heads down court late in the second half. Behind her are teammates Serena Williams and Kallie Phillips and TCU’s Sydney Whiteis. (Richard Rohlfing/Le Sueur County News)

Cleveland hung with visiting Tri-City United to halftime, but with Emily Kern — who upped her game earlier in the week against St. Clair — seeing limited action in the second half, the Clippers slipped quickly and fell 79-48 in non-conference girls basketball action on Friday.

“Tonight was a nice team win for our girls,” said TCU coach Eric Specht. “I thought our bench did a fabulous job bringing a lot of energy and really gave us a spark after our slow start. As a whole, we did a nice job looking to make the extra pass and played team basketball.”

The Titans came out with a press, but the Clippers managed it pretty well. With a Serena Remiger inside basket, a Stephanie Cink three, a Macey Ziebarth drive and a long output pass to Emmie Dittmar for a score, they led 10-4 before TCU’s Erica Jackson arced the first of five three-pointers she would have in the game.

Later, the Titans gained possessions on steals, and Sam Lang grabbed an offensive rebound after a free throw and scored to knot the game at 20. Jackson went behind the arc for two more baskets to put the Titans up 26-20, but Kern went to work after that, blasting through the press and scoring all of the Clippers’ eight points before the halftime buzzer. With a basket by TCU’s Jessica Dull, it was 28-28 at the break.

Cleveland head coach Joe Remiger thought Kern’s breakout game was against St. Clair on Tuesday despite her more accurate shooting against the Titans.

“Emily…she’s got it. She played the same thing with the press against St. Clair. She handled it well. I know as a fan, you look at they made the buckets, but to me I look at it as she was in the right spots (against St. Clair). She just wasn’t making the bunnies, the layups, but tonight she did.”

But starting with another Jackson three, the second half was all Titans.

Kern picked up her fourth infraction less than two minutes into the half and later had to sit out a spell after injuring herself in a crash. She only had time for two baskets. Later, Remiger left the game with five fouls.

“Look what happens when we pull Emily and Sarena out,” coach Remiger said.

Ziebarth hit a two and a three, and Cink and Dittmar each added a basket, but the Titans, roughing up Cleveland with steals, used a balanced offense to outscore the Clippers 51-28 in the half and sashay their way to a victory.

Kern led the Clippers with 15 points, one more than Ziebarth. Dittmar and Remiger each had six points, and Cink chipped in five. Kaylee Karels and Mya Krenik, the lone senior on senior night, each added a point.

“TCU is a good team. They have a good coach, a good program, so I’m encouraged,” Remiger said.

For the Titans, Lang had 16 points, one more than Jackson. Paige Johnson added 13 points. Kaia Krocak scored nine points, and Isabelle Factor dumped in eight. Grace Factor had six points, and Marrissa Gare scored four points.” The score does not reflect how the game played out,” said Specht. “I’m really proud of how our girls responded to Cleveland’s intensity, especially in the second half. I’m excited to see how this team comes together down the stretch.”

The Clipper girls travel with the boys for a game against Randolph on Thursday. The Titans will look for another win when they host Sibley East on Tuesday.