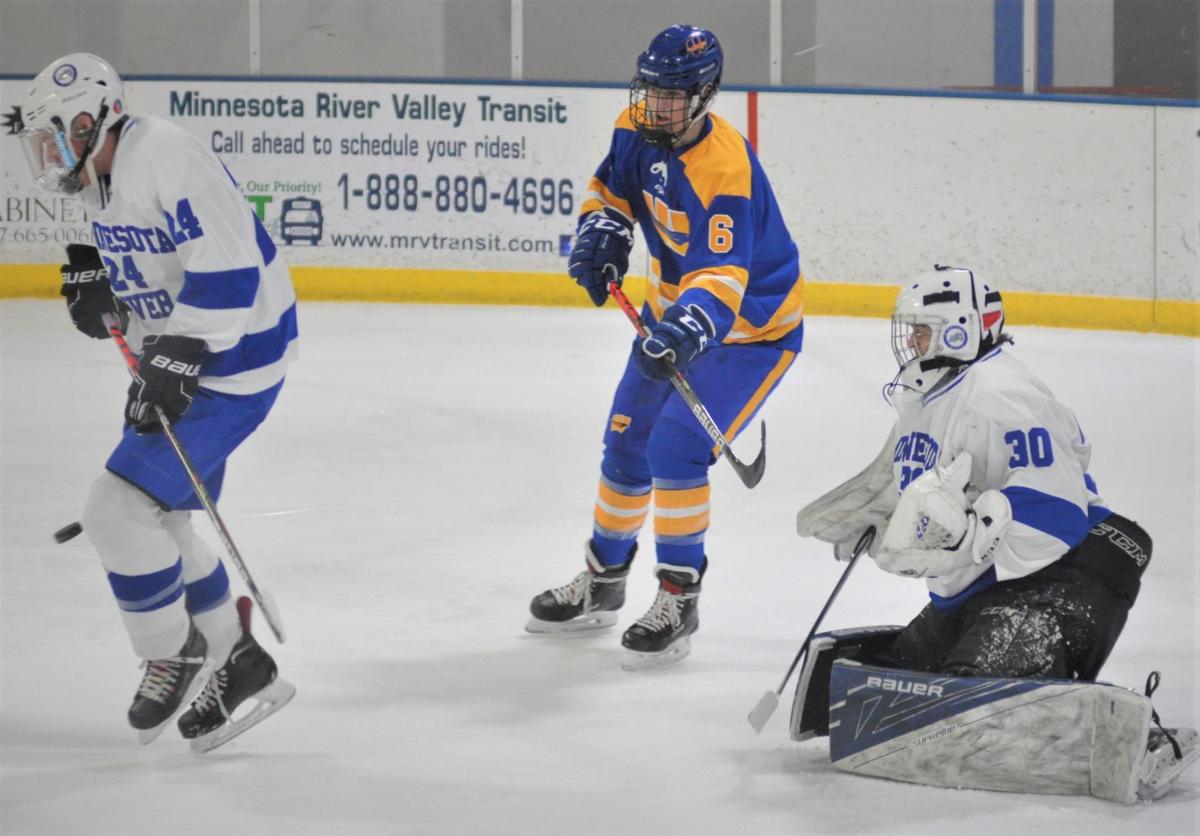 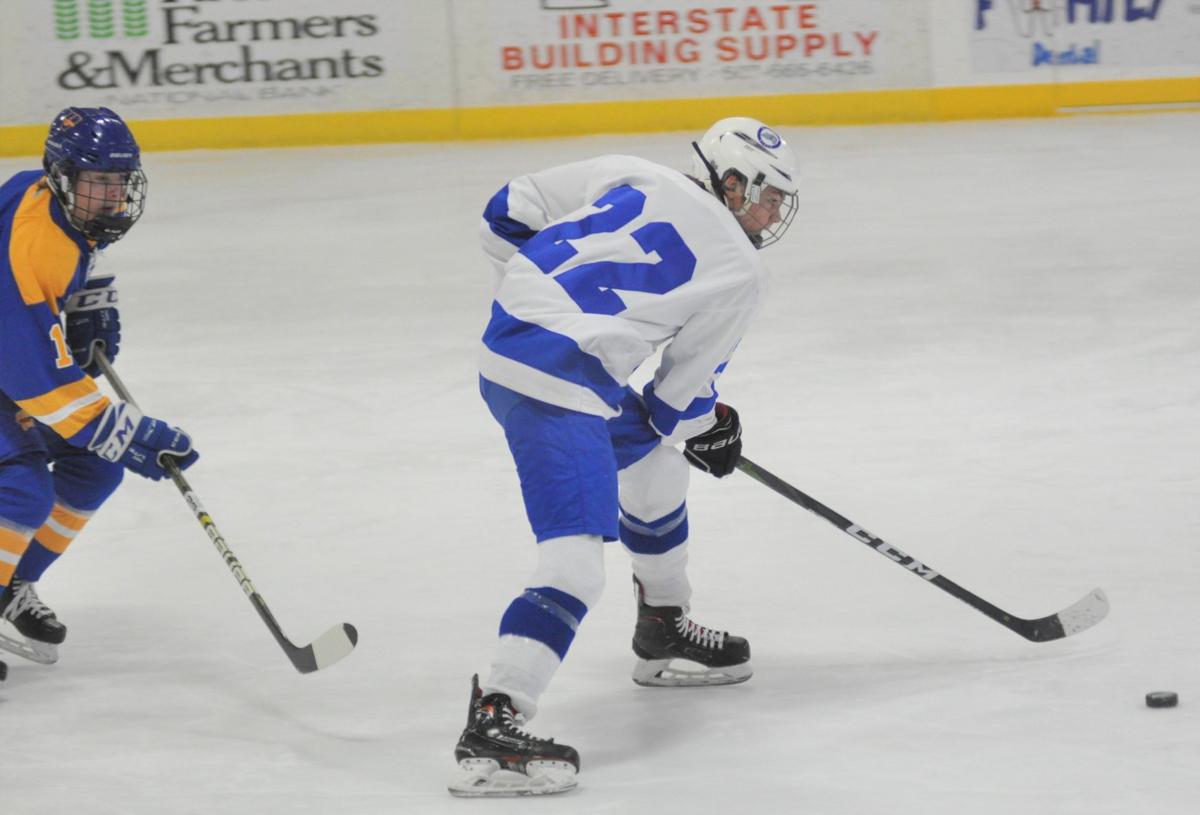 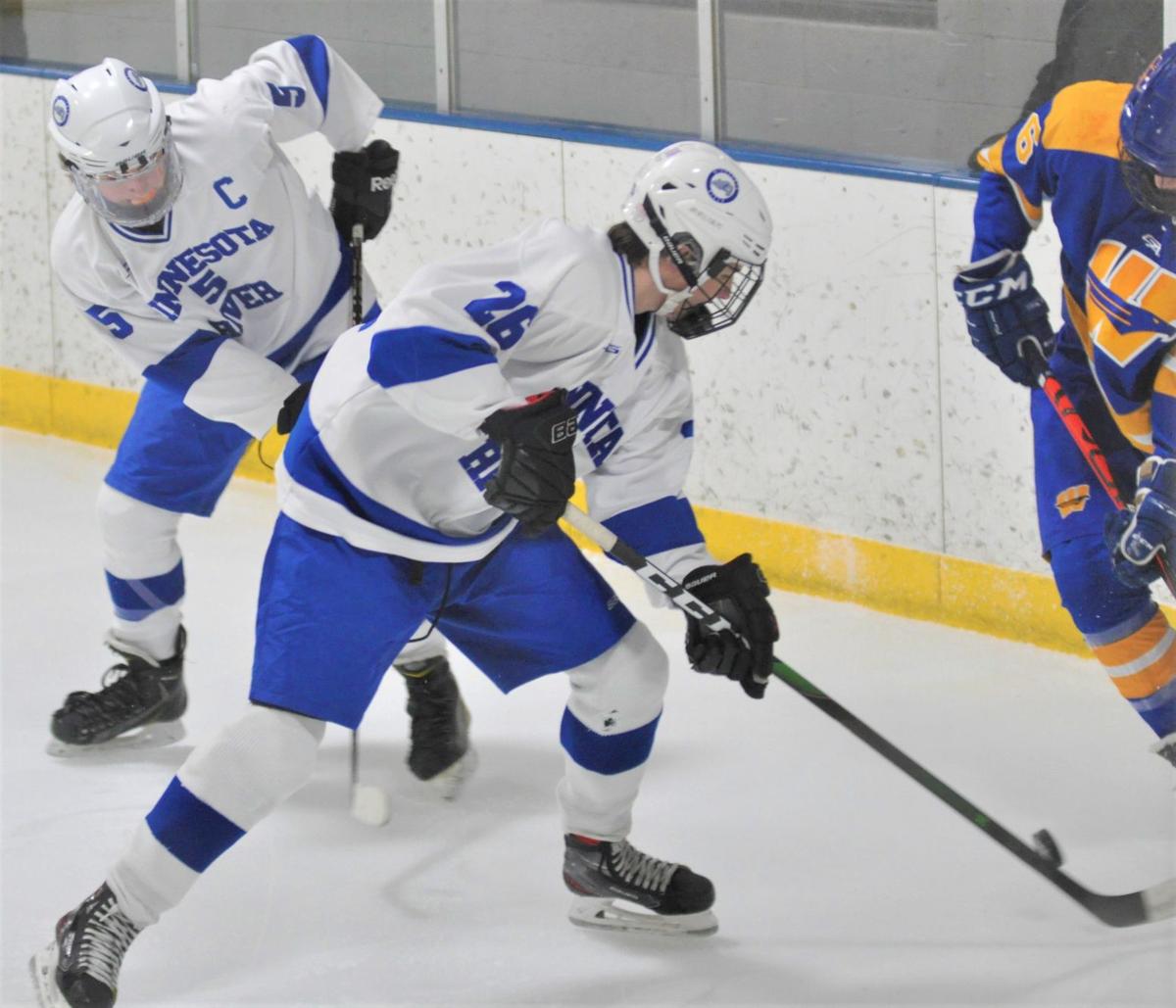 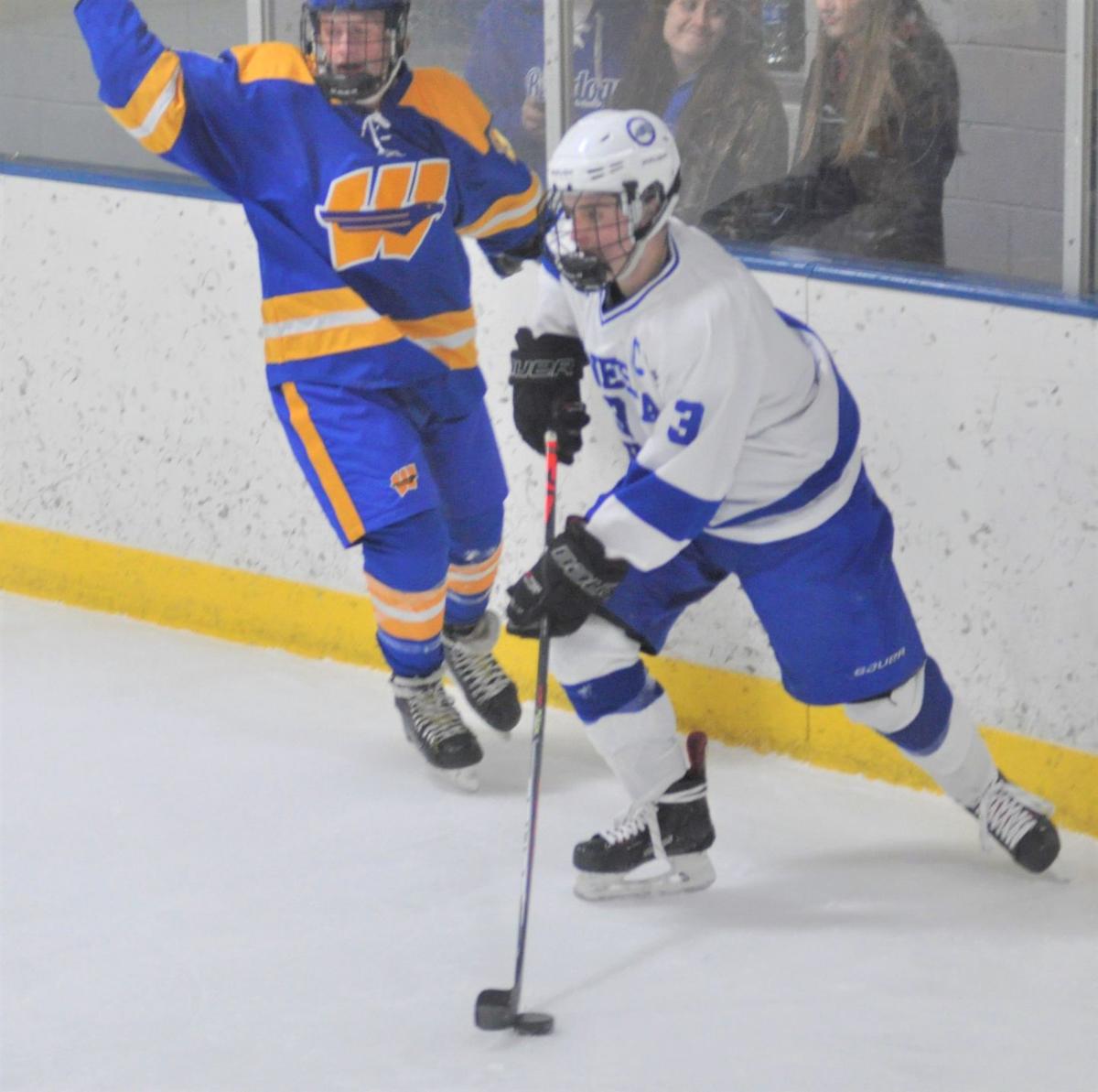 Bulldogs right wing Charlie Weick takes the puck away from a player behind the Windom net. (Pat Beck/St. Peter Herald)

Bulldogs right wing Charlie Weick takes the puck away from a player behind the Windom net. (Pat Beck/St. Peter Herald)

Putting on the pressure the entire game, it was just a matter of time before the Minnesota River Bulldogs would break open the boys hockey game Thursday against the Windom Eagles.

The Bulldogs held a precarious 1-0 lead before the floodgates opened with four goals in the last 5 minutes for a 5-0 win at Le Sueur Community Center.

“We forechecked really well and outworked them the entire game. We got pucks deep when we needed to and finished the game off pretty strong. They got tired at the end, and we finally scored a couple,” said senior left wing Charlie Weick, who finished with two goals and an assist.

Defenseman Tristen O’Brien opened the scoring with a power-play goal, assisted by Weick and defenseman Jake Rimstad, at 13:57 of the first period.

“We were on the power play, I got a shot on the net, and it popped right out to Tristen who scored,” Weick said.

After a scoreless second period, the Bulldogs upped their lead to 2-0 on a goal by forward Brendan O’Keefe, assisted by forward Brooks Reicks, at 11:22 of the third period.

“It bounced out to him in front of the net, and he shot it and scored,” Weick said.

The Bulldogs quickly scored again 1:18 later on the power play at 12:40. Weick scored from Rimstad and right wing Shawn Lehtinen for the 3-0 lead.

“I just got fed a nice pass, shot it, and it found the back of the net,” Weick said.

Then, when Eagles pulled goalie Dan Stubbe for a sixth attacker with 3:30 remaining, Weick scored his second goal of the game into an open net, again assisted by Lehtinen, at 15:03, to make it 4-0.

The Bulldogs finished off the scoring with another power-play goal by forward Reece Wydert, assisted by Brooks Reicks and Blake McVenes, at 16:33.

Bulldogs goalie Logan Moe earned the Bulldogs’ first shutout of the season, stopping all 21 shots on goal, including some tough ones. Windom goalie Dan Stubbe also made many big saves for a total of 34.

“Logan played really well tonight,” Weick said. “He kept us in it with a lot of big saves. That’s helpful when you’ve got guys making saves back there.”

Minnesota River went over the .500 mark at 8-8 overall and 7-3 in the Big South Conference.

Weick said the Bulldogs have improved though the season.

“We have a lot of young guys, so everyone is getting to know each other,” Weick said. “We’ve got some good chemistry going right now, so that’s always special. The guys are getting more confident when they have the puck. Hopefully we end the season strongly and peak at the right time in the section playoffs.”

Weick plays on the first forward line with Brady Sowder centering him and Lehtinen, who moved up to forward from defense in midseason.

“We lost five games in a row, and we needed some offense, so we moved Shawn up there,” Weick said. “It works really nice.”

“We kind of got thrown in together one day, and it kind of clicked,” Weick said.

The Bulldogs will be hosting Youth Night on Tuesday, Jan. 21 versus New Ulm. All youth, ages 15 and under, will be admitted free with a paying adult. Immediately following the game the varsity will be signing autographs. The Eagles (11-4-1, 9-1) beat the Bulldogs 8-1 last week.