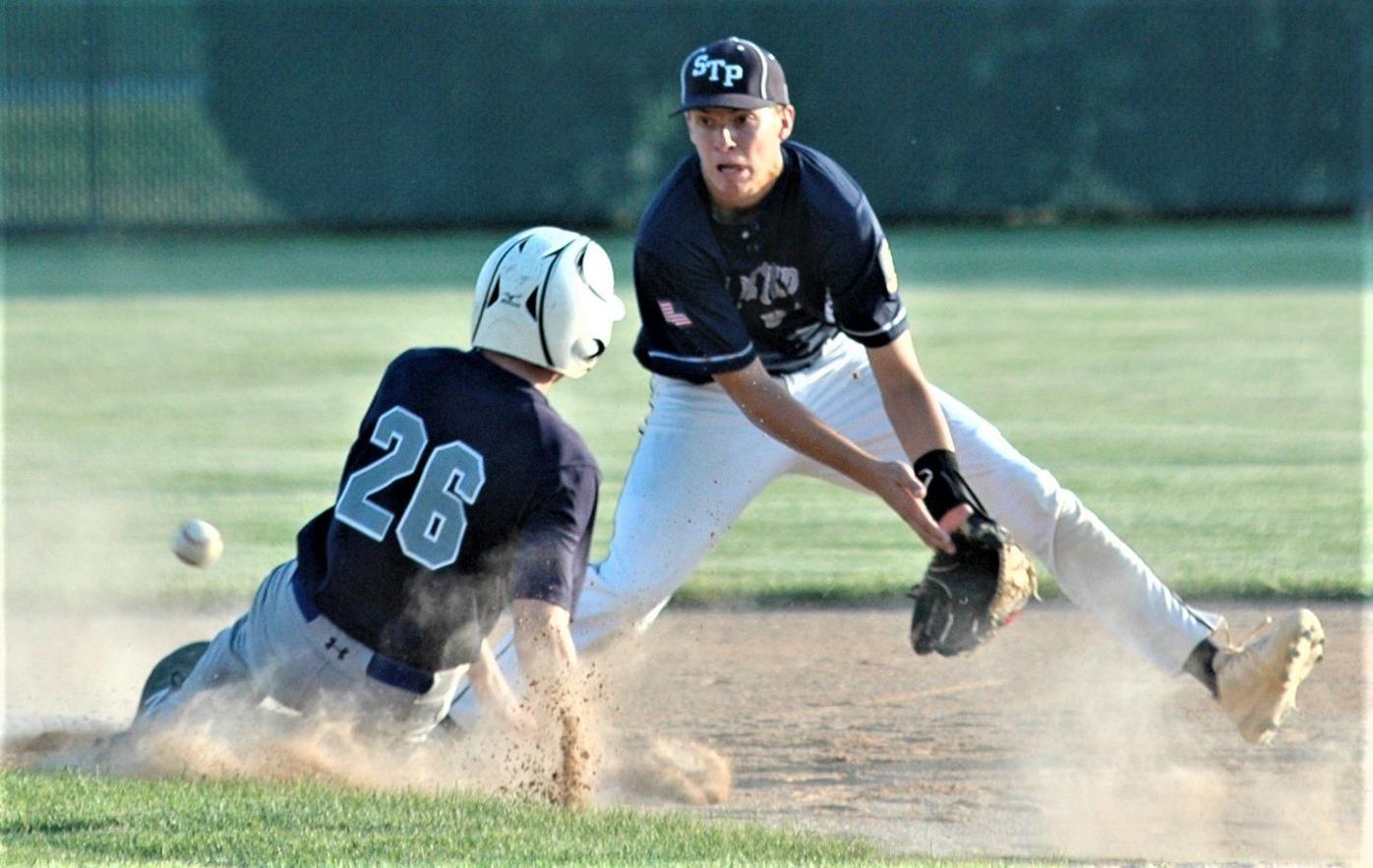 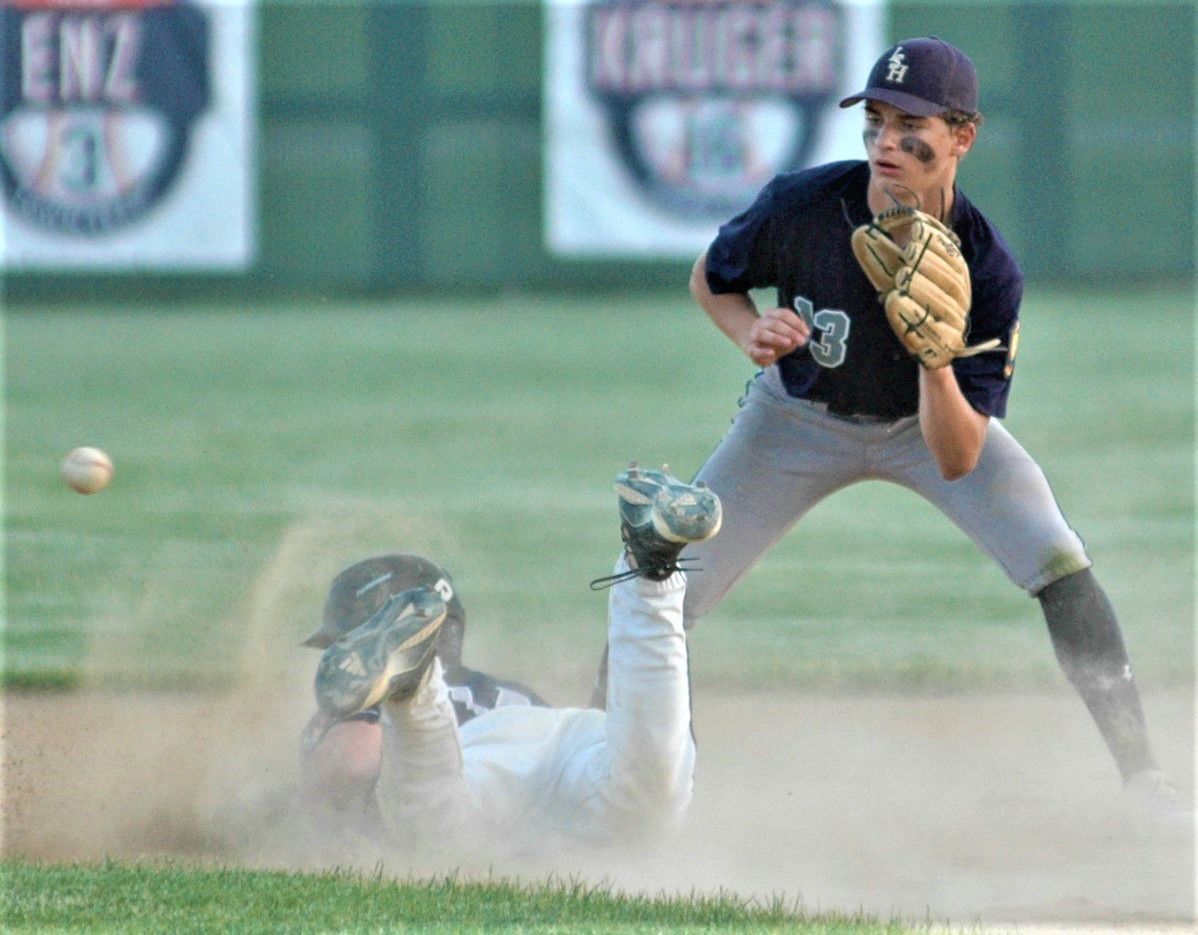 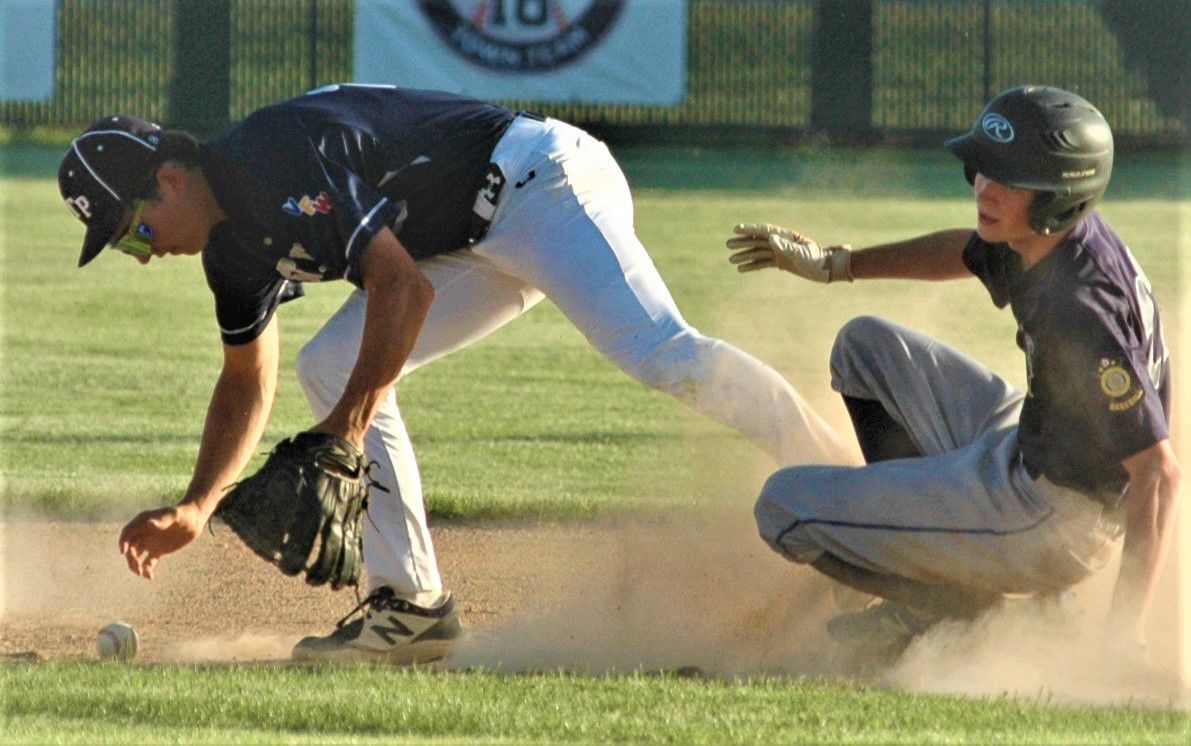 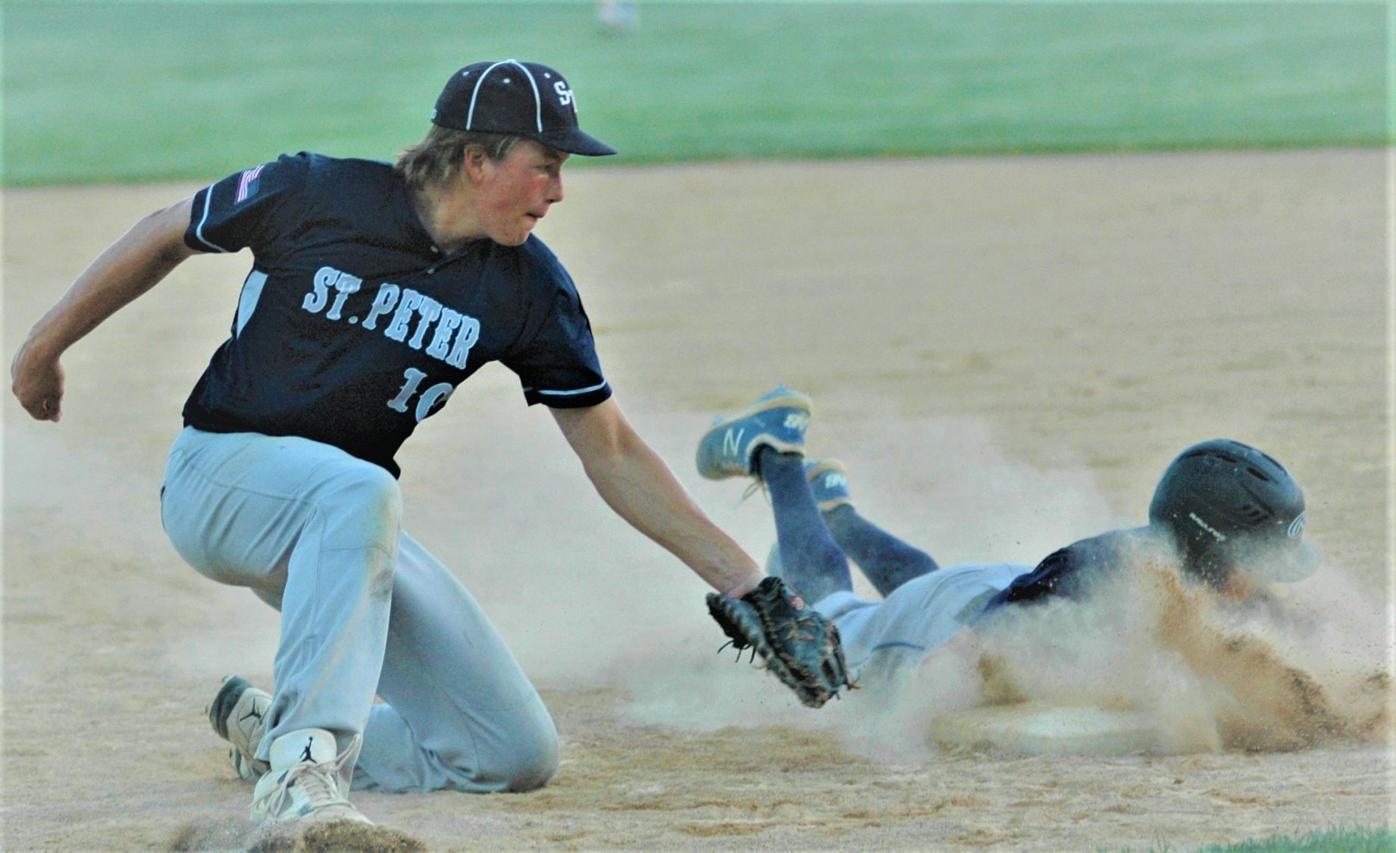 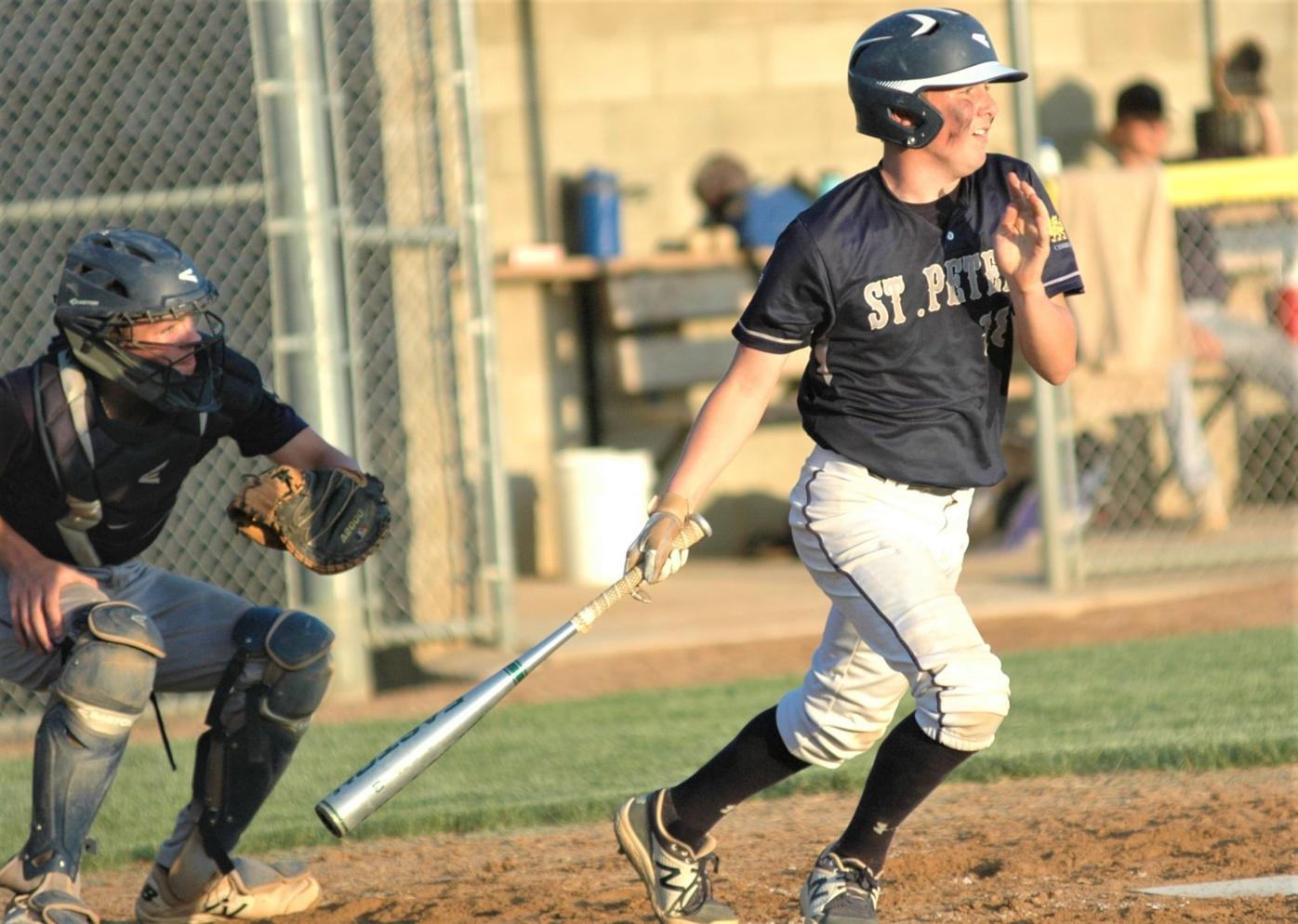 St. Peter's Sam Moelter breaks out of the box after hitting an RBI single to right against Le Sueur-Henderson. Catching is --. (Pat Beck/southernminn.com) 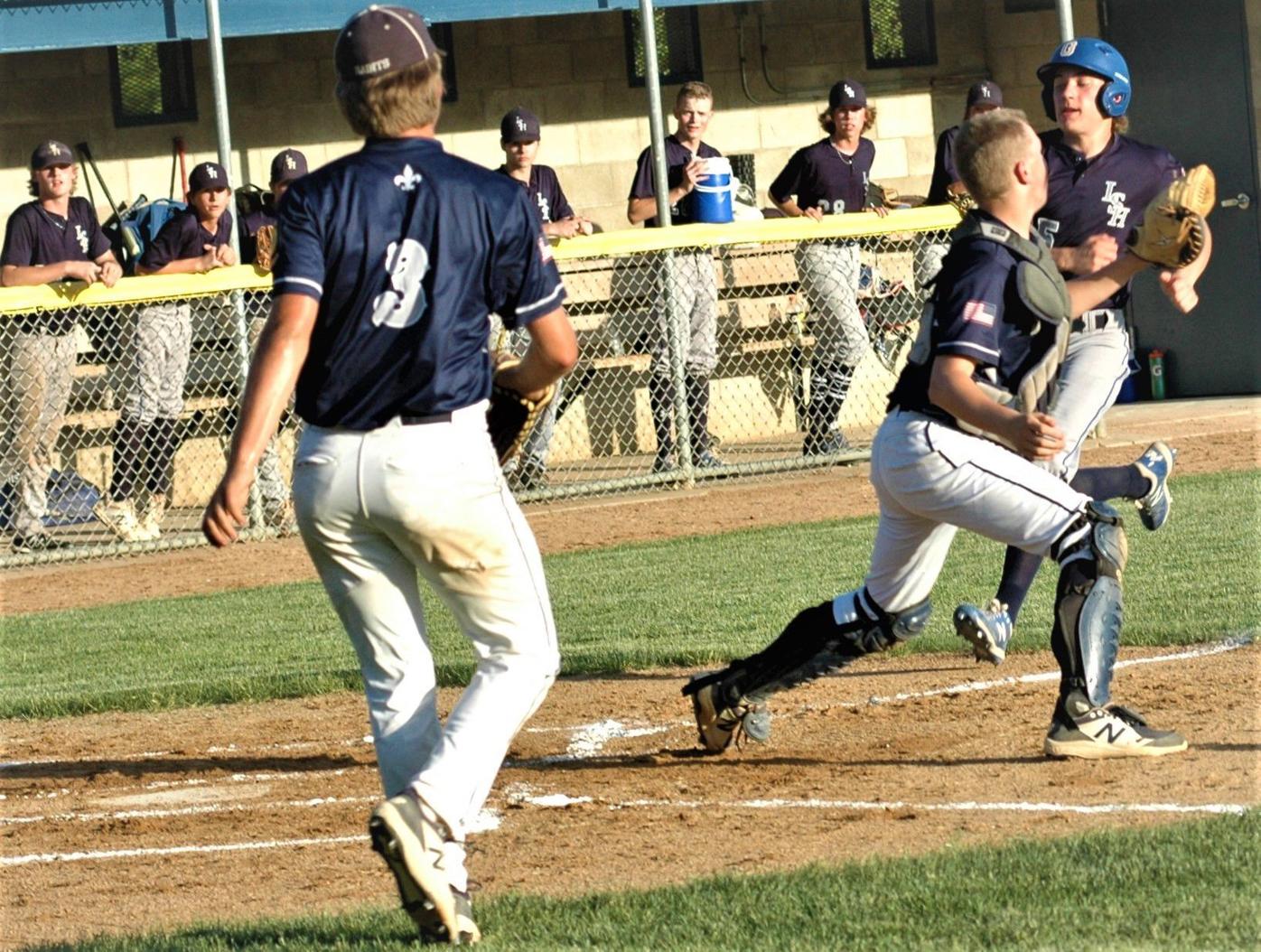 In a tale of two games within one game, St. Peter Legion baseball team rallied from trailing 5-0 after one inning to defeating Le Sueur-Henderson 9-5 on Thursday at Veterans Field.

The Saints scored one run in the third, three in the fourth and five in the fifth to open their season with a victory.

LS-H (2-2) batted around the order in the first inning. David Gupton led off with a walk, Ethan Hathaway reached on an error, and Charlie Weick doubled in David Gupton. Hathaway scored on an error, Sam Gupton singled in Weick, and Ben Miller delivered a hit-and run single to put runners on first and third. Then on a double steal, Miller stole second and Sam Gupton stole home after the throw to second. Brogan McMillen then doubled in Miller.

St. Peter scored one run in the third to cut the lead to 5-1. Ashton Volk walked, stole second, went to third on an error, and scored on a balk.

St. Peter cut the lead to 5-4 on three runs on three hits in the fourth with two outs. Bennett Olson walked, went to second and third on baulks and scored on a double to right center by Isaiah Jacobson. Riley Throldahl reached on an infield hit. Then on a double steal, Throldahl stole second, Jacobson stole home, and Throldahl went to third on a bad throw to second. Sam Moelter then singled in Throldahl.

The Saints kept on hitting the fifth inning with five runs on five hits. Volk led off with a single to center. Vinny Guappone beat out a bunt single, and the runners moved up to second and third on the throw to first, and Volk scored on and error.  Guappone went to third on a wild pitch. Josh Robb walked and never stopped running and stole second. Theo Giedd hit a sacrifice fly to drive in Guappone. Jake Moelter singled to left to advance Robb to third, and he scored on a single to left by Olson. A double steal by Moelter and Robb put runners on second and third, and Kaiden Guida singled to right to drive on Moelter and Robb.

The Saints had nine hits, led by Guappone who went 2-for-4 with a run scored.

Giedd picked up the win in three innings of relief. He didn't allow a run while striking out six and allowing one hit and no walks.

Tanner Tellijohn pitched the last two innings for LS-H. He gave up two earned runs on four hits, no walks and one strikeout.