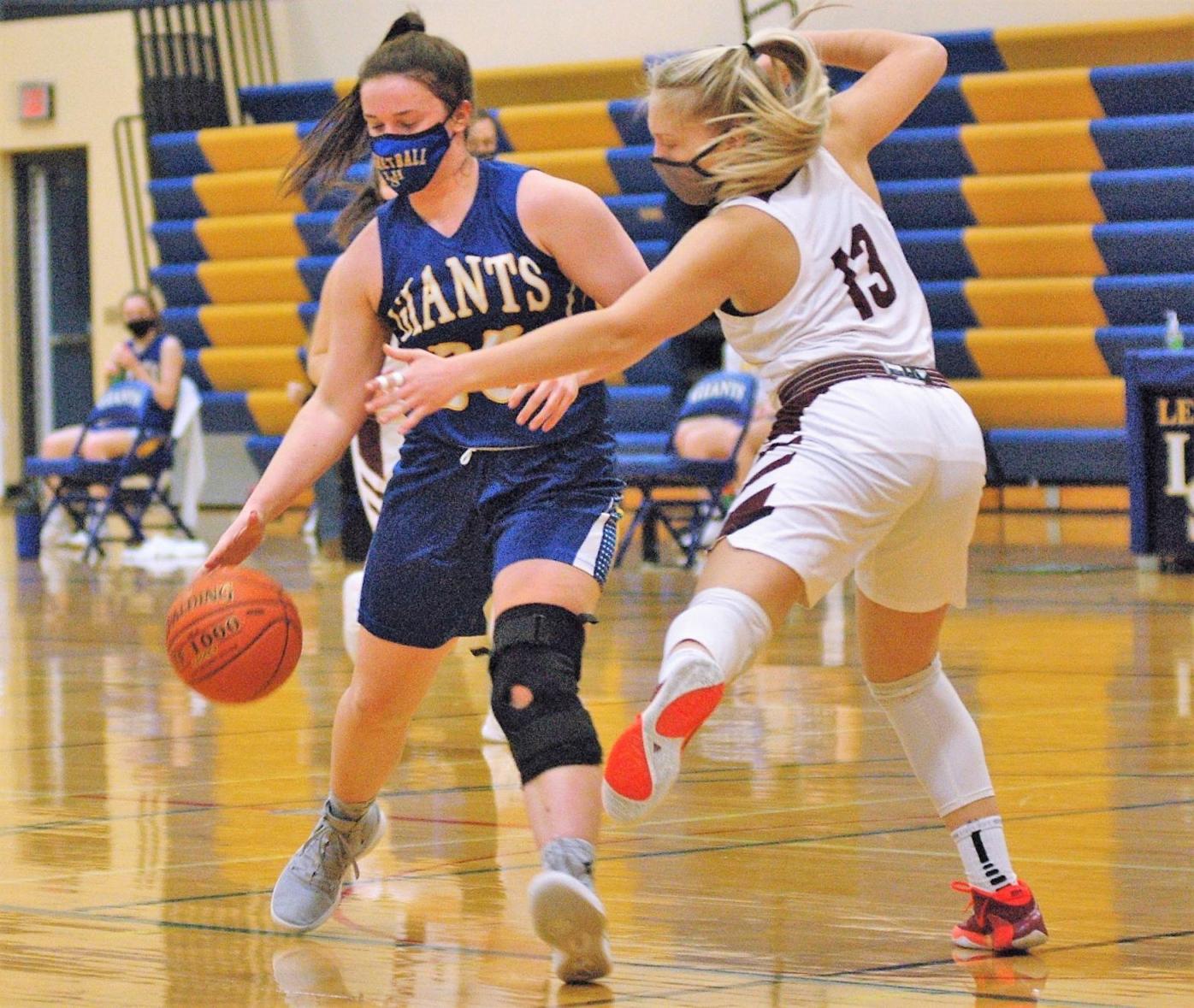 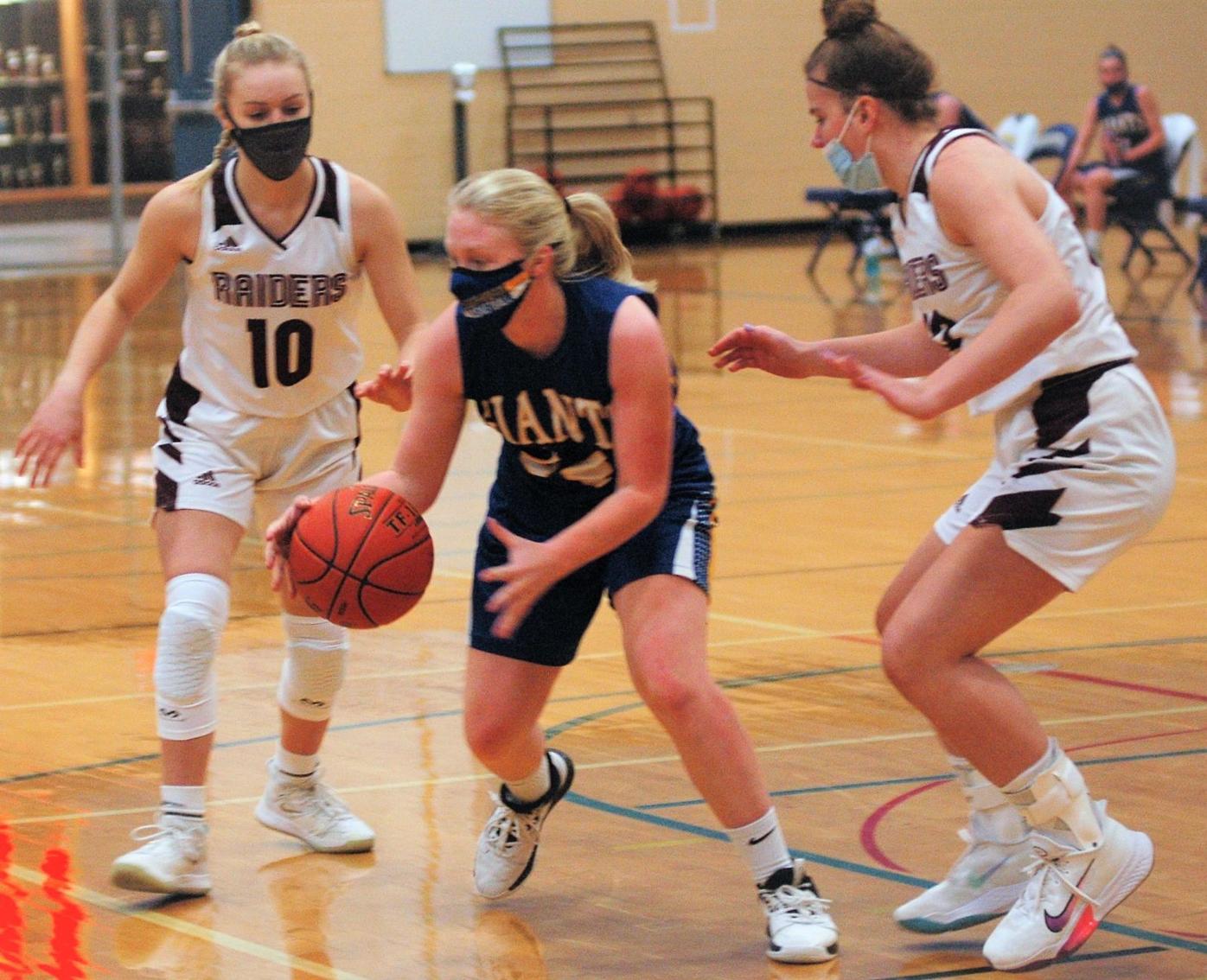 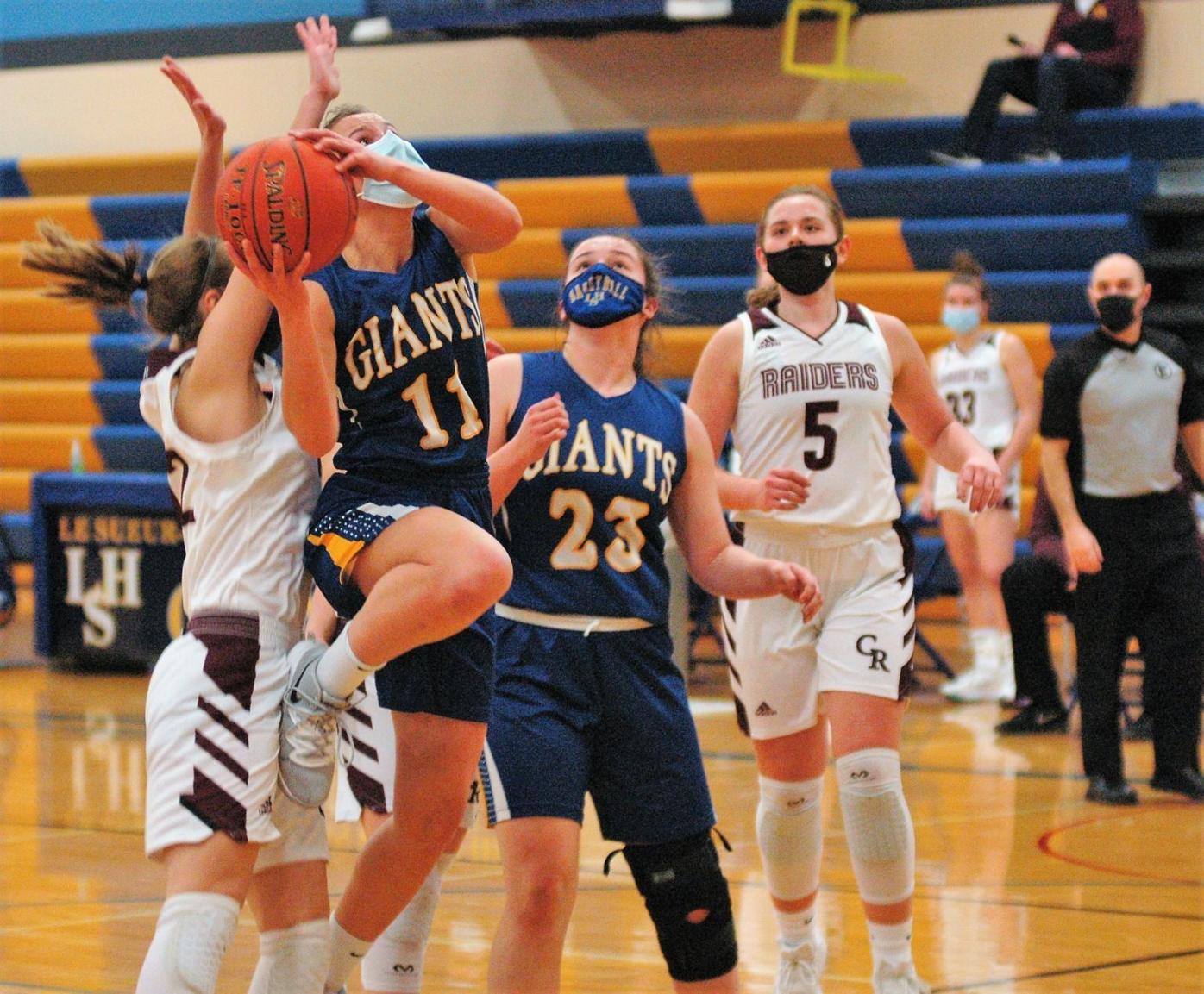 LS-H guard Halle Bemmels, with teammate Zoe Thomson by her side, drives in traffic against the Raiders. (Pat Beck/southernminn.com) 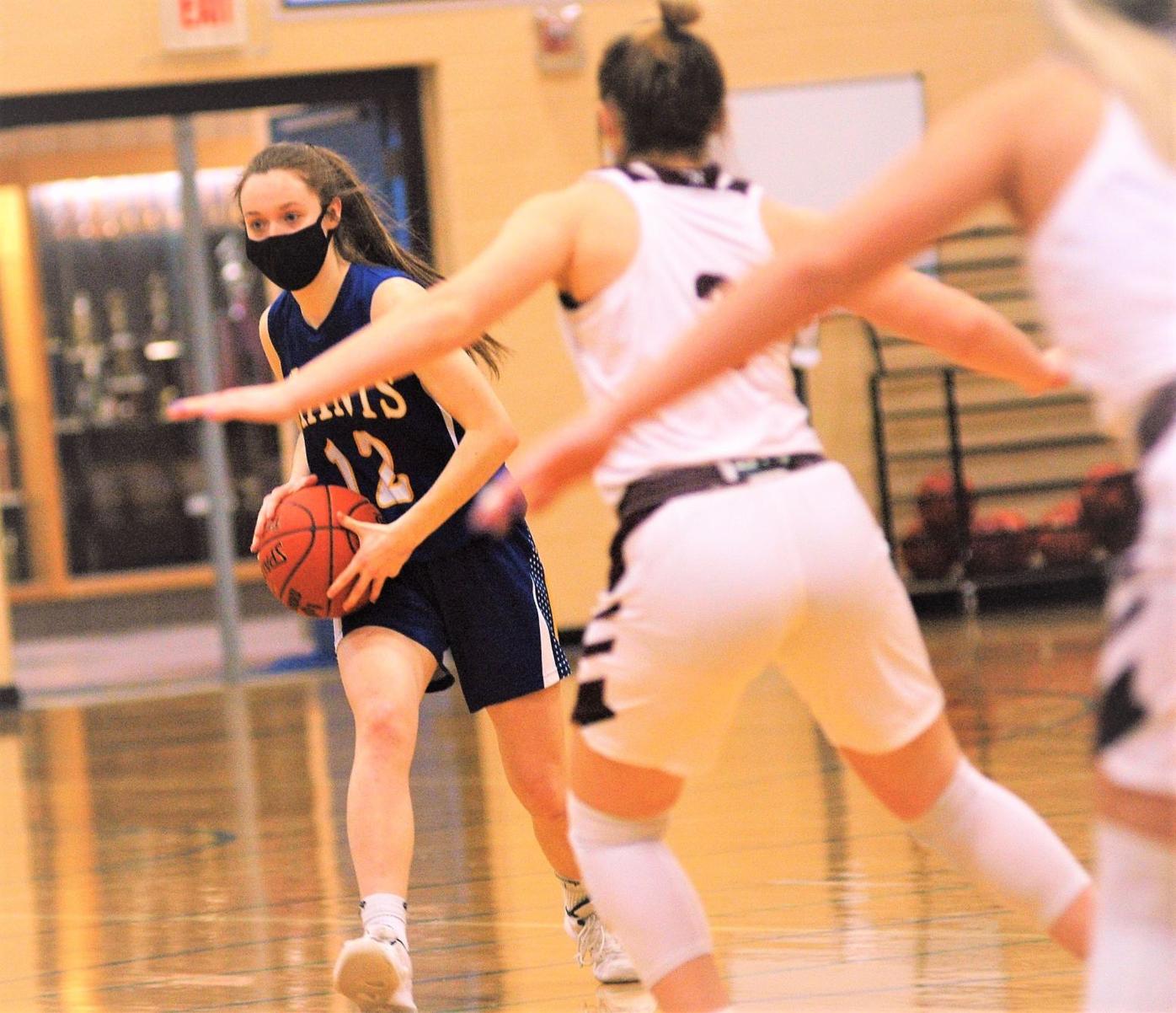 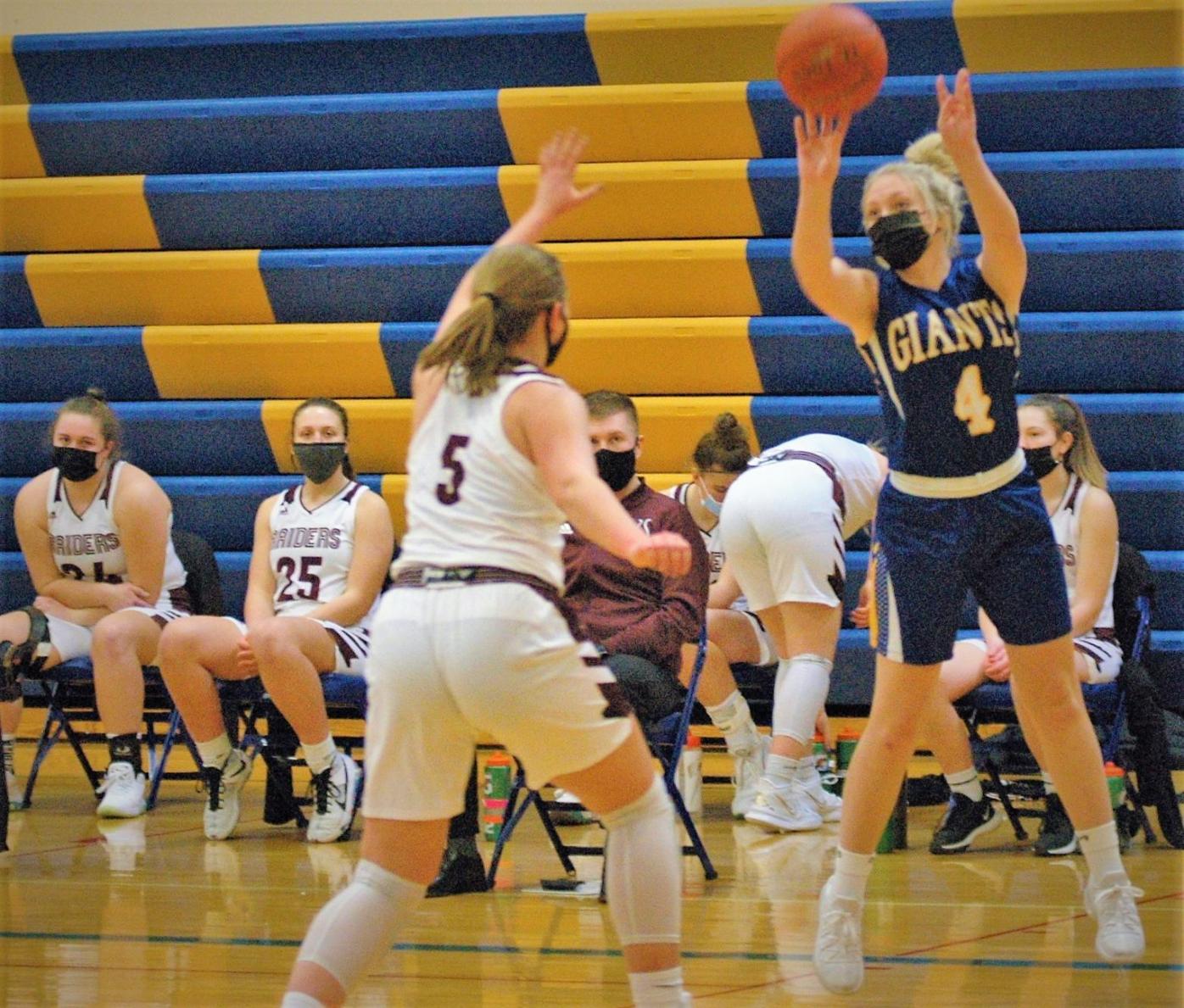 The second time around the Minnesota River Conference schedule has gone better for the Le Sueur-Henderson girls basketball team.

The Giants still have a ways to go to move up in the standings, but they're cutting their margin of losses.

For instance, the Norwood Young America Central Raiders beat LS-H in their first meeting by 28 points, 67-39, on Jan. 19.

The Raiders also won the rematch on Thursday, but they won by only five points 56-51 on parents' night Thursday at Le Sueur.

Facing a taller team, the Giants took more long-range shots, and it paid off.

Senior guard Olivia Fritz led LS-H with 15 points on five 3-pointers. Her little sister, sophomore guard Rhyan Fritz, made a pair from downtown, plus a 2-pointer, for eight points.

Senior guard Halle Bemmels also made a basket from behind the arc for a total of 30 out of the Giants' 51 points coming from 3-point range. Bemmels paced LSH with four assists and five steals.

Back-to-back 3-pointers by Olivia Fritz and Bemmels tied the score at 19 with 4:10 remaining in the first half. But the Raiders outscored the Giants 9-1 in the rest of the half to take a 28-20 lead.

LS-H senior guard Karragen Straub, who finished with six points, made a pair of 2-point baskets to start the second half and cut the Raiders' lead to 28-24.

A lay-up by senior center Zoe Thomson made it 48-46 Giants with 3 minutes to play. Thomson finished with seven points and a team-high 13 rebounds.

The Raiders (5-2) stalled for the last minute and drew fouls and made six straight free throws for the 56-51 victory.

LS-H senior guard/forward McKenna Borchardt made a put back at the buzzer for the final score.