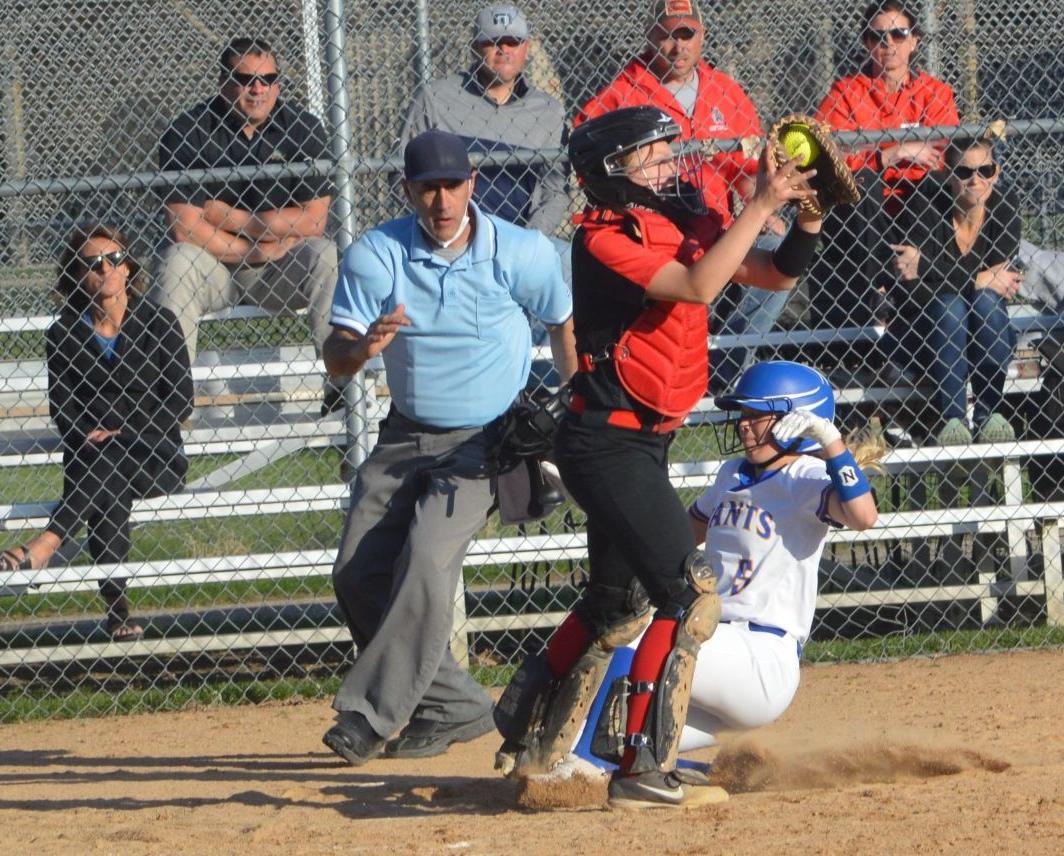 Sara Milam is called safe as she slides into home just before Mayer Lutheran's catcher can tag her out. (Carson Hughes/southernminn.com) 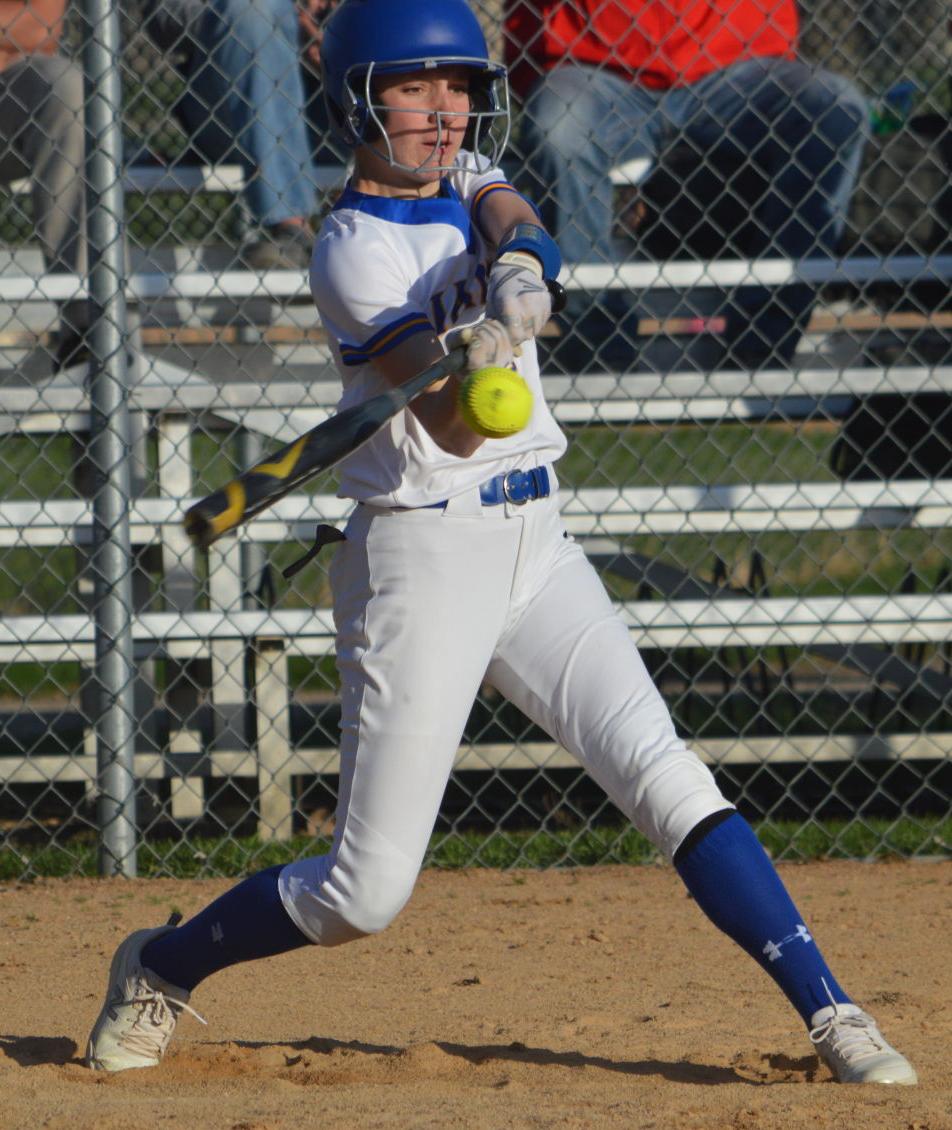 The Le Sueur-Henderson softball team continued its winning streak on Thursday, adding two victories to a 8-0 record. Batting up against Mayer Lutheran in a doubleheader, the Giants swept the Crusaders 18-0 in a four inning no-hitter in the first game and 12-1 in the second.

The Giants jumped out of the gate with a dominant performance. At the top of the first, LS-H pitcher Chloe Brandt knocked out the Crusaders 1-2-3, throwing two strikeouts while the shortstop tagged out a batter on second. While the Crusaders were scoreless, the Giants racked up 10 innings.

Halle Bemmels and Chloe Brandt were batted in by a single from Rhyan Fritz, starting the Giants off with two runs. Zoe Thomson knocked Fritz home on a single and Thomson rounded the bases on a flyout to right field. Sam Wilbright got on base with a single and was batted in by Makenna Borchardt. Bemmels then collected two RBIs batting in both Sara Milam and Borchardt. Bemmels advanced to home thanks to a single from Brandt, who was knocked in by a single from Fritz. Fritz scored the final run on a double by Thomson.

The Crusaders were shut out again in the second inning as Brandt pitched two strikeouts and the Giants caught a fly ball to left field. LS-H racked up eight more runs in the second, starting with a double by Sam Wilbright, who was knocked in by a single from Milam. Milam reached home off a double by Borchardt, who advanced to home on a single by Bemmels. Brandt singled Bemmels to home and was batted in by Zoe Thomson with a double. Wilbright knocked in Thomson with a single and Milam batted in both Olivia Fritz and Wilbright with a single.

The third was a scoreless inning for both teams. Brandt threw three consecutive strikeouts, but the Giants failed to get on base as well. But with an 18-0 advantage and a no-hitter, the Giants were under little pressure to collect more runs. With three strikeouts at the top of the fourth, Brandt delivered a quick victory.

Top scorers for the Giants were Bemmels, Brandt and Sam Wilbright, each collecting three runs over three times at bat. Rhyan Fritz, Thomson, Sara Milam and Makenna Borchardt each collected two runs and Olivia Fritz contributed one. Milam, Thomson and Rhyan Fritz led in RBIs with three each and the team collected 14 hits.

Brandt pitched for all four innings, giving the Giants a no-hitter while throwing 10 strikeouts and 11 first pitch strikes between 13 batters.

While the first game was a quick domination for the Giants, the Crusaders put up more of a challenge in the second. The Giants took the lead at the top of the first as Brandt advanced to first base on a wild pitch, stole second and third, and reached home on a second wild pitch to give LS-H their first and only run of the inning.

While the Giants gains were more modest, pitcher Rhyan Fritz still caused enough trouble for the Crusaders to keep the scoreless at the bottom of the first.

Both teams ran scoreless in the third before Brandt added a run to the Giants' total in the fourth. Hitting a single, Brandt advanced to second on an error by the first baseman and was batted in by Rhyan Fritz. The Giants added another run in the fifth, with Milam being knocked in by Morgan Gregersen. The Crusaders finally scored their first run at the bottom of the fifth, but the Giants remained at a lofty 6-1 advantage.

Bemmels and Thomson pushed the score up 8-1 with two runs in the sixth before the Giants had their best scoring inning in the seventh. After two outs, Madi Wilbright got on base on an error and was knocked in on a single by Bemmels. Brandt advanced to first on walk and Rhyan Fritz ran to first on an error. All three advanced to home on errors by the Crusaders, giving the Giants a final score of 12-1.

Bemmels and Brandt were top scorers again with three runs each. Rhyan Fritz, Thomson, Sam Wilbright, Milam and Madi Wilbright contributed on each. Brandt led in RBIs with two each and the team collected six total. As a team, the Giants produced 11 hits.