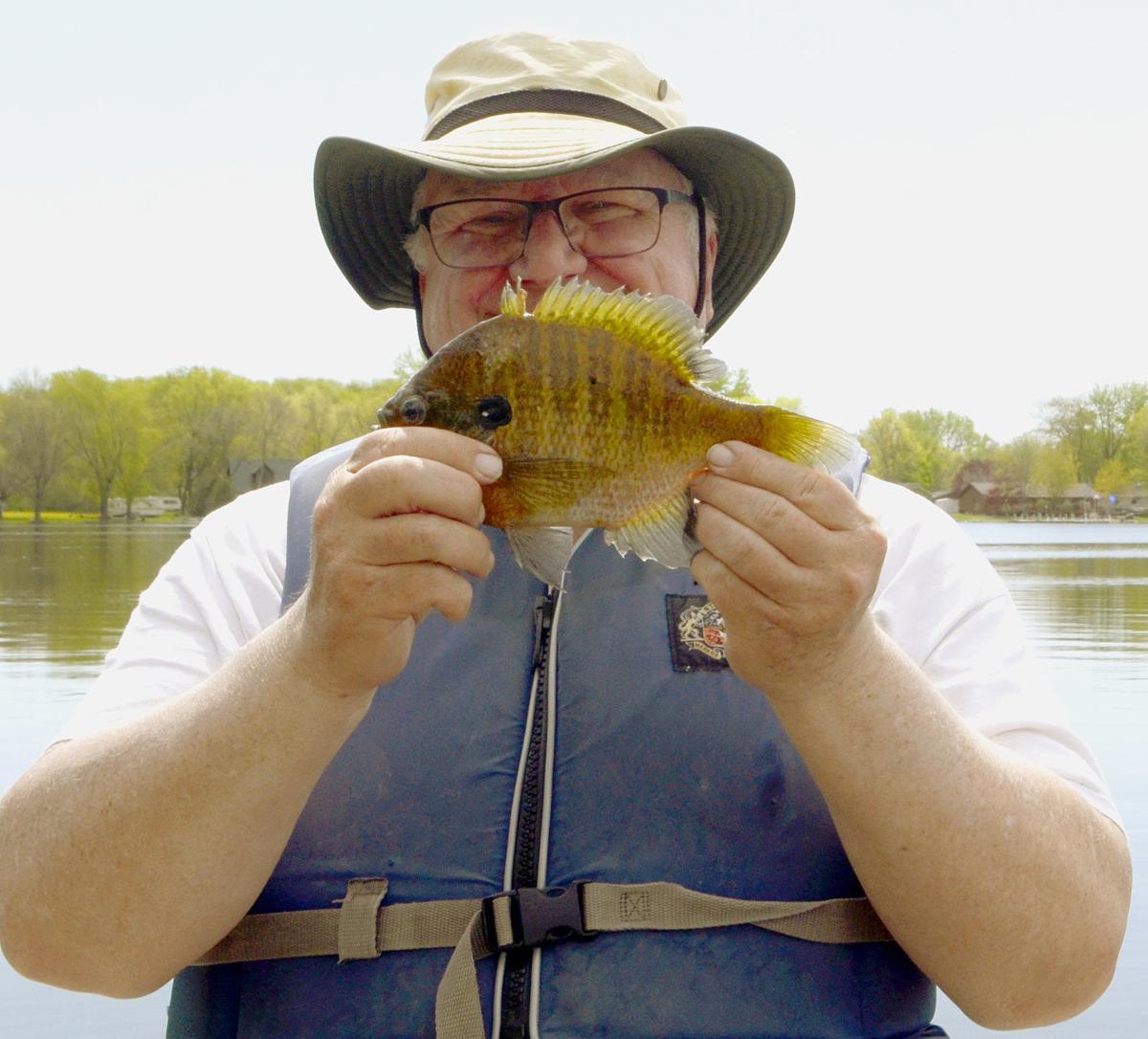 St. Peter Herald Sports Editor Pat Beck shows about an 8-inch sunfish he caught last May at Shields Lake. The lake has a good population of sunfish and crappies, but the bigger ones like this are sometimes hard to find. (Pat Beck/St. Peter Herald)

As far as I can remember, I’ve fished eight of the 190 lakes proposed by the Minnesota Department of Natural Resources for sunfish limit reduction.

Two of the lakes, we fished most often.

My family and I vacationed a week at a cabin on a resort at Elephant Lake in St. Louis County near Orr for three years in the early 2000s followed by about a half dozen years at a private cabin at nearby Blackduck Lake.

At Elephant, we caught a good number of sunfish, but most were small at 7 inches or less long. So we moved over to Blackduck and found the mother lode of big sunfish and crappies. The big fish continued to bite for years, although the numbers did slow down a bit, but then picked back up again in the last couple of years.

I’ve fished Tetonka Lake in Waterville with friends from shore in the shallow lagoons for a number of years in the spring. We used to catch big sunnies and crappies, but the last couple of years haven’t only caught a few small ones.

I’ve also fished Prior Lake, mostly ice fishing a number of years, and caught some nice sunnies in the 7-inch range.

Last year, while my family and I stayed at a cabin on Shields Lake in Shieldsville, near Faribault, we also fished a morning a couple of miles north at Mazaska Lake hoping for the big crappies. We didn’t catch any big ones and only a few small ones, plus a northern.

In the mid-1980s to mid-’90s, when I used to live in the Twin Cities in Circle Pines, we fished nearby Centerville Lake a number of times and never caught very many fish, only some small sunnies and crappies.

Also up north, we stayed at a cabin on Clear Lake in Aitkin for two years and also only caught small sunfish. As the name says the lake is clear, which makes it difficult to catch bigger fish, so we ended up finding big sunfish in nearby Ripple Lake.

We also briefly fished off the dock one year at Bear Head Lake in that state park near Ely where I also only remember catching a few small sunfish.

All of these lakes, plus many more, would benefit in having the sunfish limits reduced. The only one where we experienced catching big sunfish was Blackduck, which still is pretty good.

With a limit of 20 sunfish, it wouldn’t hurt to cut it in half at Blackduck, Elephant and Clear, which the DNR is proposing. Anglers don’t need to keep 20 sunfish. A few fish are enough for a a meal for one person. We don’t have to have a freezer full of fish.

Tetonka, Prior Lake, Mazaska, Centerville and Bearhead are proposed to be reduced to a limit of five sunfish. That would be OK, too, where the numbers and size of sunfish tend to be less in those lakes.

Sunfishing has provided more than 50 years of enjoyment for me since I was 3 years old. They usually are willing to bite on a worm or a waxworm or just a jig or a variety of other artificial lures. And they’re one of the hardest fighting fish for their size.

Even though the limits may be reduced on some lakes, people can still catch and release as many as they wish. And by releasing the fish they could eventually grow bigger and provide better fishing and maybe bigger sunfish for future generations.

Catch and release has worked well with bass and muskies in which anglers release almost all of those species, and that has kept the size up.

For more information about sunfish and a video, go to: dnr.state.mn.us/fish/sunfish. Let the DNR know what you think about the proposed by responding to the online survey at https://www.surveymonkey.com/r/DDZVWFZ