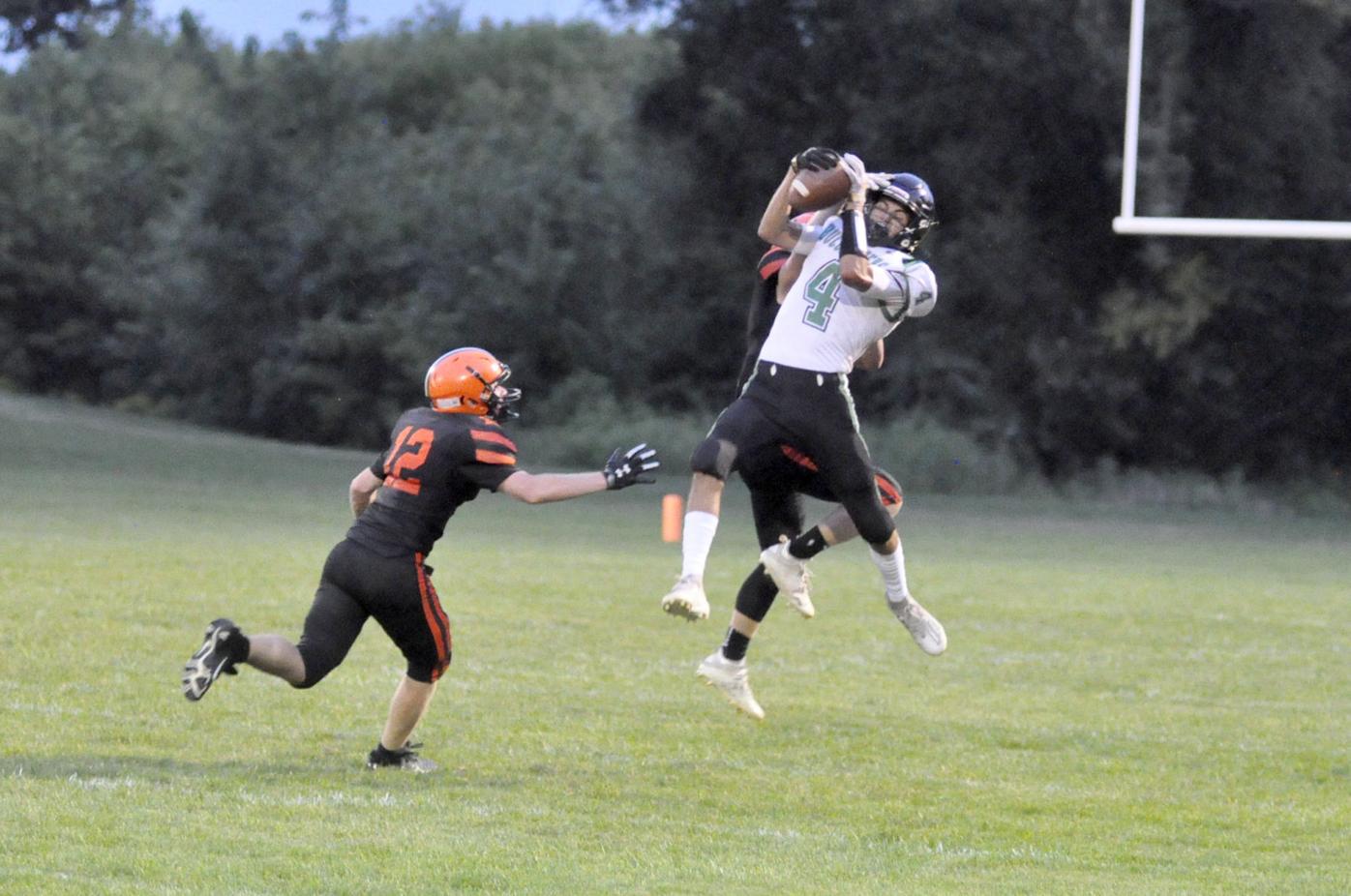 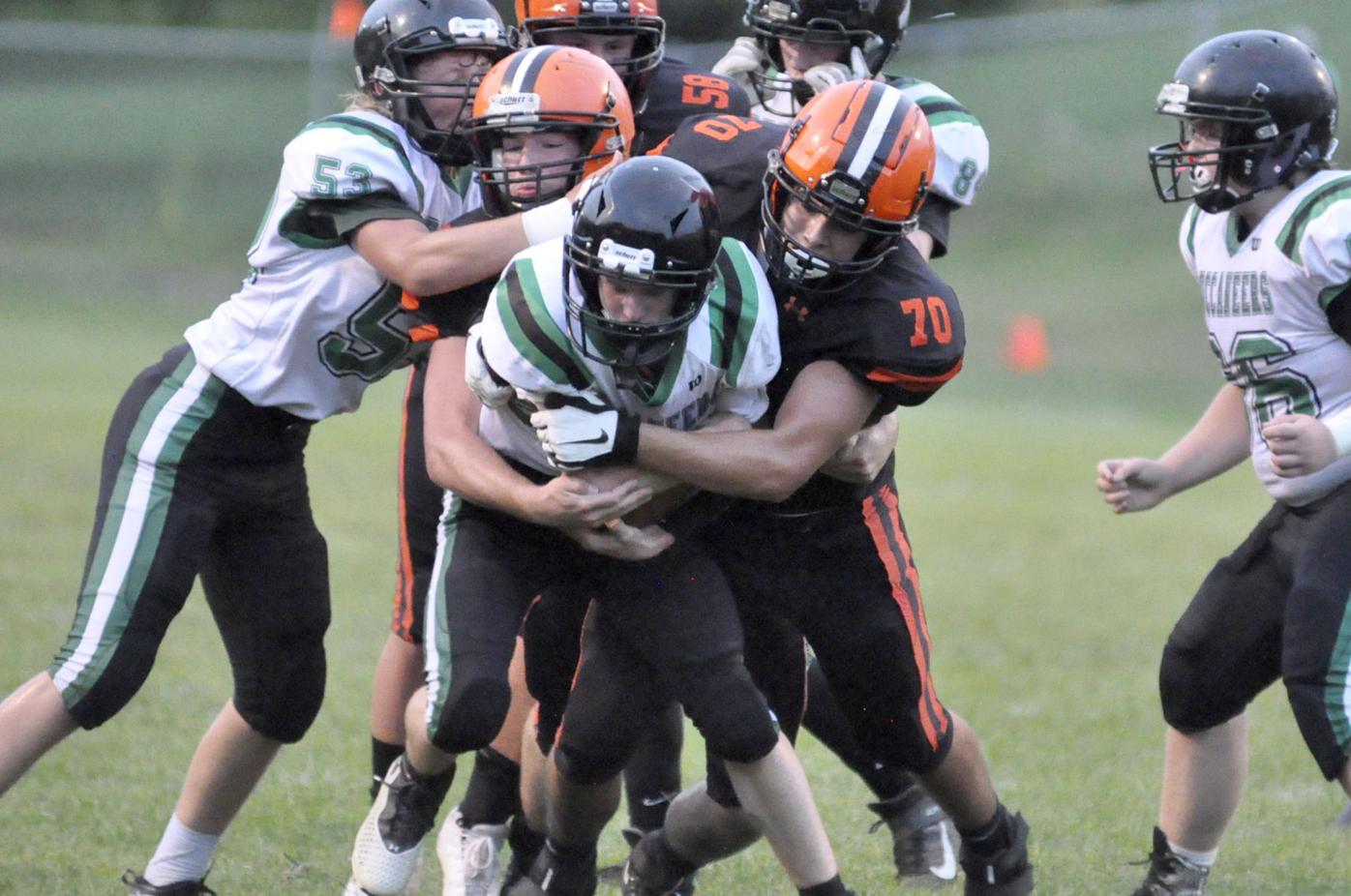 Lucas Walechka (70) and Carter Barto (88) converge on the Buccaneers quarterback for a sack. (Ben Camp/Southernminn.com) 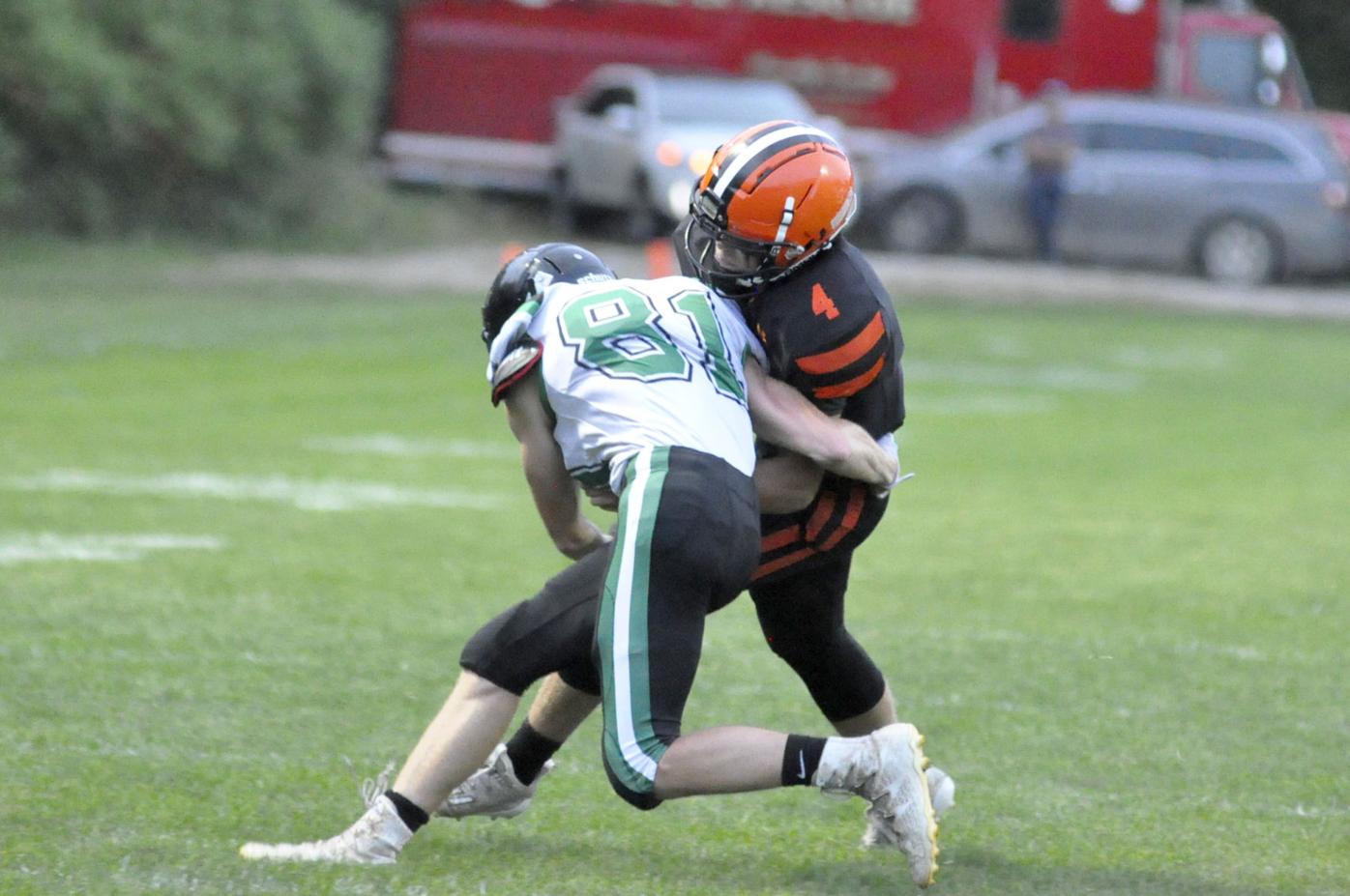 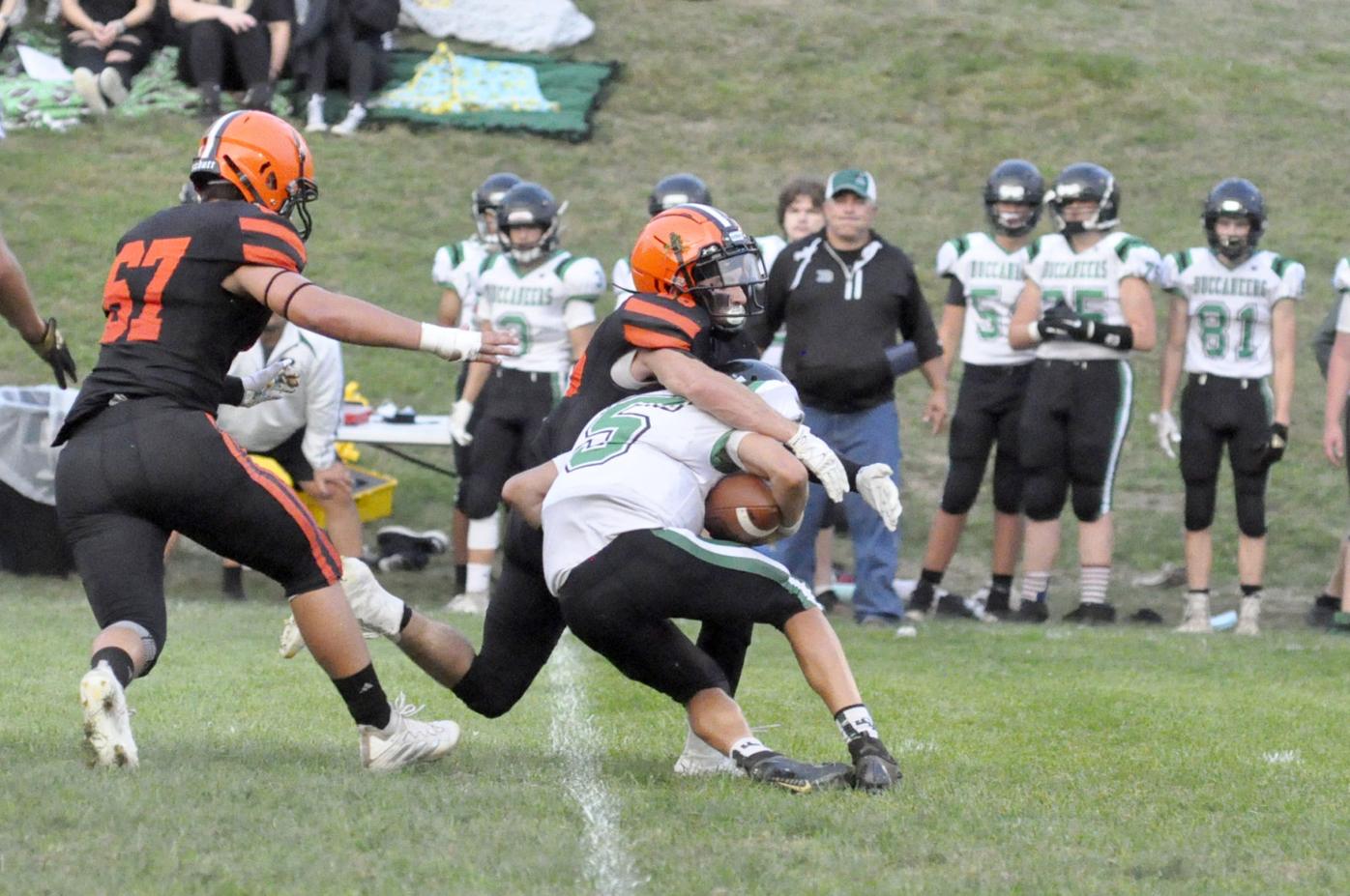 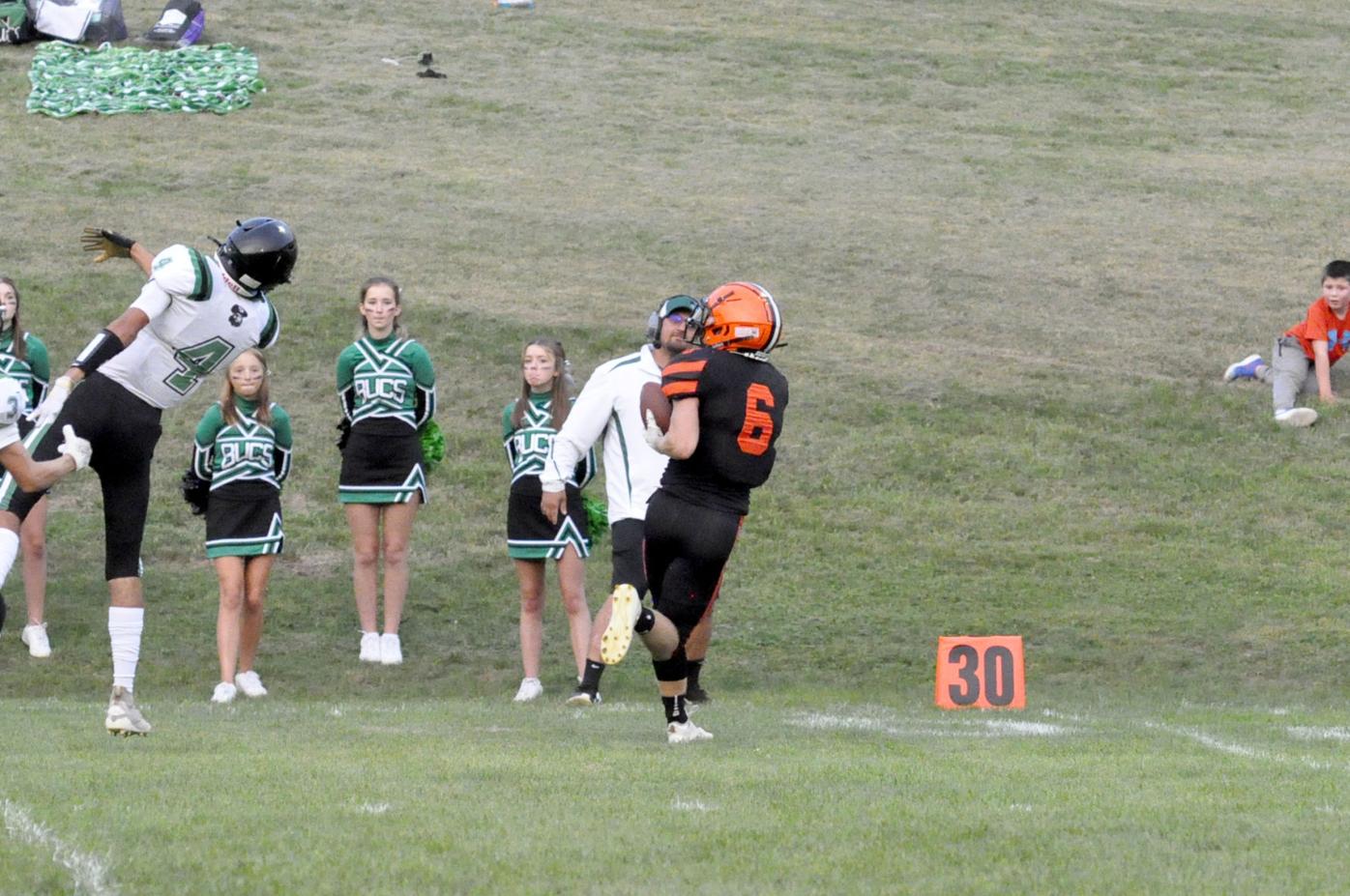 Clippers wideout Carter Dylla hauls in a pass from Jackson Meyer before taking it to the endzone for a touchdown. (Ben Camp/Southernminn.com) 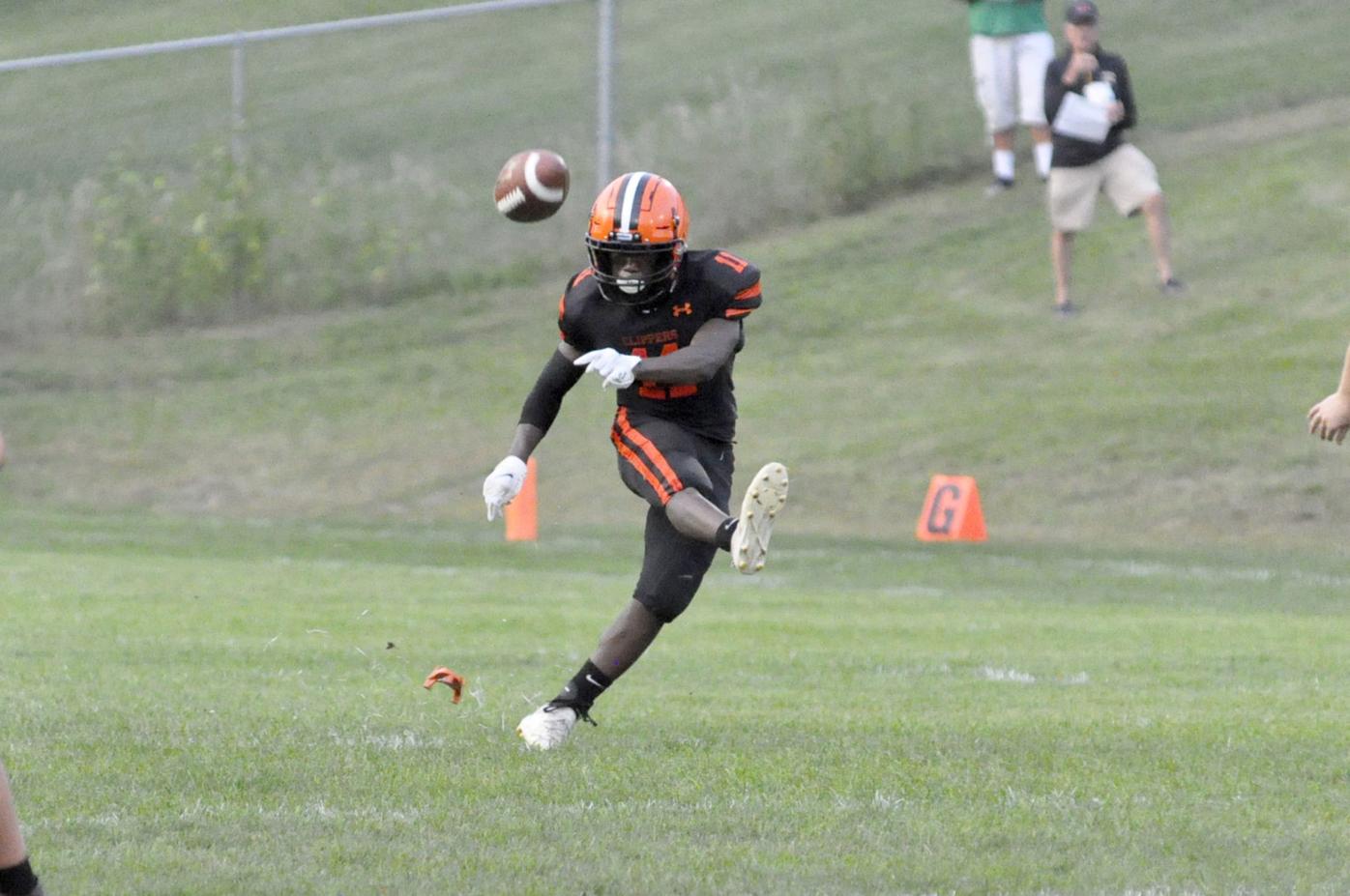 Henry Strobel kicks off to the Buccaneers. (Ben Camp/Southernminn.com)

Bend but don't break defense was a constant for both the Cleveland Clippers and the Waterville-Elysian-Morristown Buccaneers all night Friday.

It was the Buccaneers who made the biggest play in the final minutes of the game, however, as they were able to score a touchdown and convert a two-point play to earn the 8-7 victory.

"In most games, a big play is gonna happen, but you have to do your best not to put yourself in that situation where it beats you," said Cleveland head coach Erik Hermanson.

The big play came with 2:28 to go in the fourth quarter when WEM was facing a fourth down and 11 yards to go situation. The Buccaneers quarterback tossed a 50-50 ball to a double covered Dom Paulson, and it looked as though it was going to be batted down by safety Carter Dylla. However, the ball ended up tipped into the air, and Paulson was able to come down with it and step into the end zone.

WEM then made the choice to go for two and the lead, and despite an initial push from the Clippers defensive line, the Buccaneers runner was able to break the plane for the successful two-point conversion.

"There were a number of guys that were dealing with cramps, and it's really hard when you have to play every play on offense and defense," said Hermanson. "One of those guys is Dylla, and that's a big responsibility for number six. We just wish that tipped ball went down instead of in the air."

Dylla was responsible for the Cleveland touchdown, as during the team's first drive, on a third and nine, starting quarterback Jackson Meyer threw a ball downfield with perfect touch that Dylla hauled in, taking it 55 yards to the house. Henry Strobel followed up the touchdown with a successful point after conversion.

Dylla made another huge play for the Clippers, as the Buccaneers were driving the ball with less than a minute to go in the first half. He undercut Paulson on a deep throw and was able to intercept the pass, taking it all the way down to the 28-yard-line.

Unfortunately for Cleveland, during the interception return, quarterback Meyer suffered an injury that would force him to miss the remainder of the game.

Freshman quarterback Blake Lyons entered the game for Meyer, and on a designed rollout on his first pass attempt, he left a ball a bit high that was intercepted, ending the scoring opportunity and sending the game to halftime.

The entire second half saw Cleveland controlling the ball and getting Lyons comfortable in the huddle and at the line. The Clippers were able to do so, for the most part, until the final drive and subsequent score from the Buccaneers.

"With a freshman QB we were still able to drive the ball and kill the clock for a quarter and a half with the lead," said Hermanson. "Kudos to the offensive line, they just need to do that for the whole game and for Jackson."

Before being forced to leave the game, Meyer went 5-11 passing for 100 yards and a touchdown.

The loss puts the Clippers at 1-1 on the season. Next week, they will take to the road, as the travel to Winthrop to take on Gibbon-Fairfax-Winthrop.