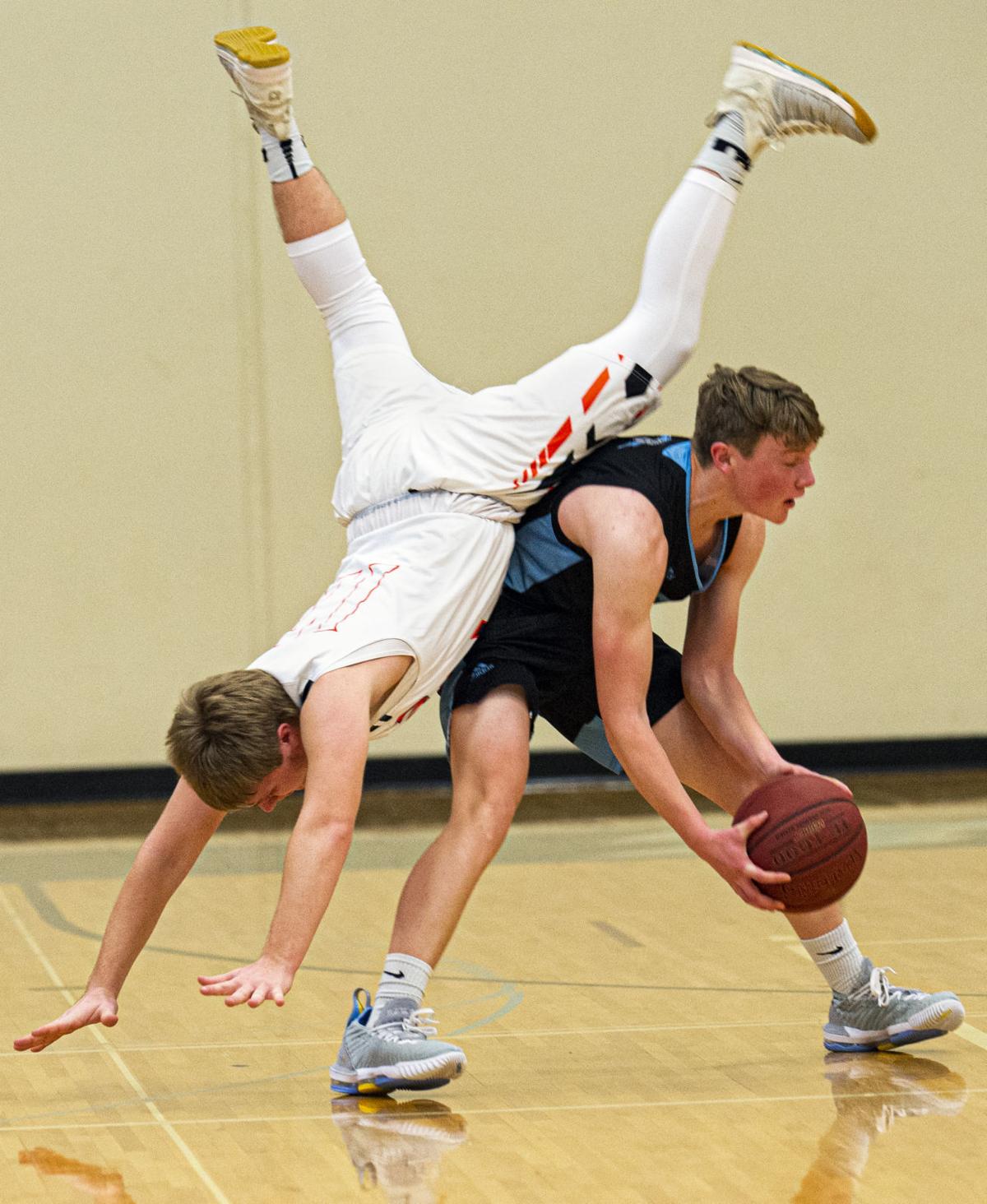 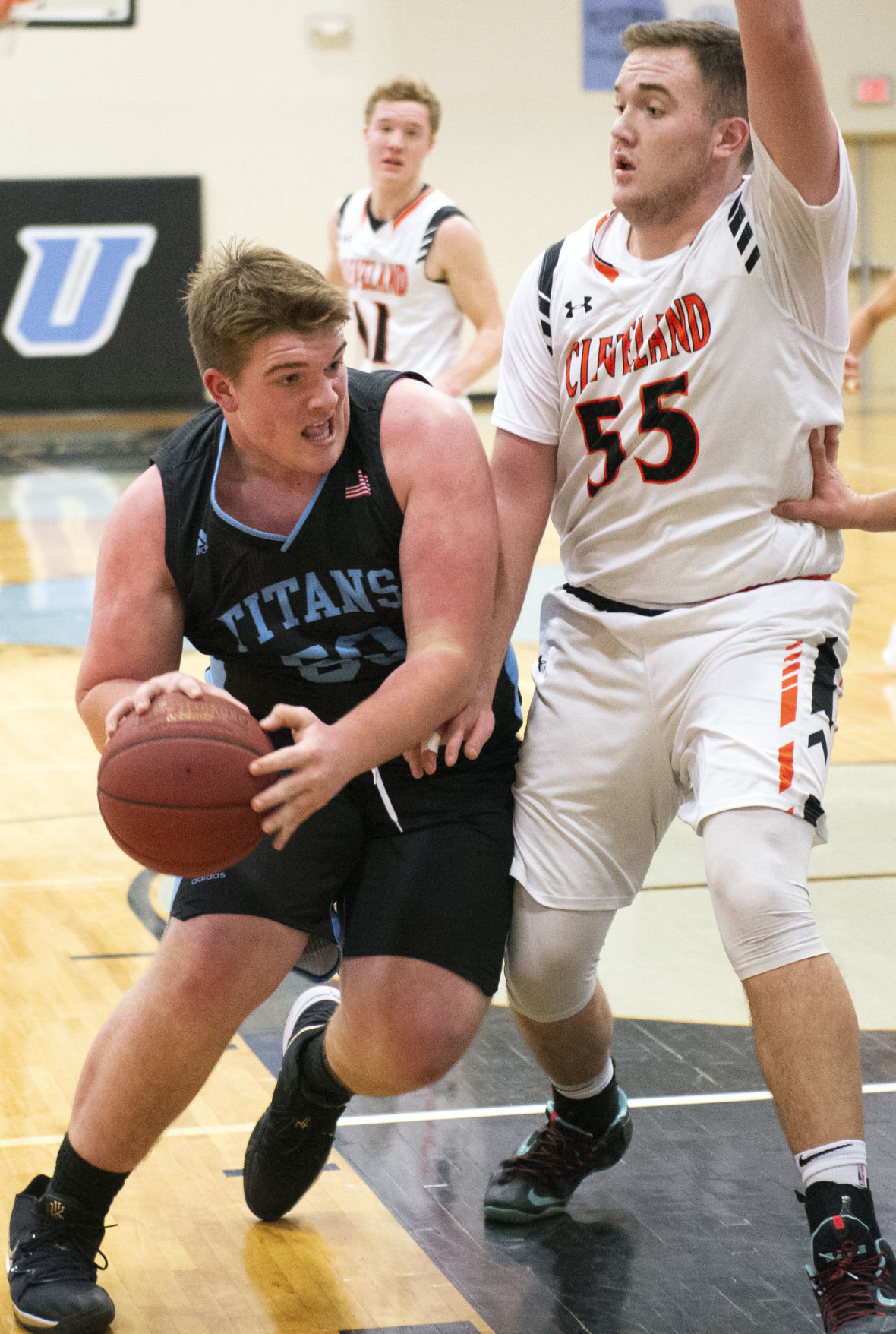 In a battle of the big guys, TCU’s Mason Vosejpka drives to the hoop will being defended by Cleveland’s Ben Holden. (Richard Rohlfing/Le Sueur County News)

In a battle of the big guys, TCU’s Mason Vosejpka drives to the hoop will being defended by Cleveland’s Ben Holden. (Richard Rohlfing/Le Sueur County News)

“Levi (Baker) came out and hit a couple of early shots and was so disruptive on the top on defense,” said Cleveland head coach Dan Fredrickson. “He and Elijah (Sullivan) choked off all of their passing lanes early. That was the difference in the game. They quit trying to rotate the ball as quick, and we could settle in where we wanted to on defense.”

Sullivan, starting for injured Isaac Mueller, dropped a three from the corner for the game’s first basket. Ben Holden scored from the floor, and TCU got on the board with a three from Carlos Estevez.

Baker swished the first of the hat trick of threes he would have for the night and then lobbed the ball into Eric Rohlfing for an alley-oop, and the Clipper were up 10-3. The Clippers scored the next eight points, all after steals, before TCU’s Matthew Rabenberg made a basket from the floor.

“The size inside for us defensively was a big difference too with them not getting the ball inside,” said Fredrickson. “The matchups with Ben and Eric inside were big.”

Keeping the pressure on, the Clippers went up 36-9 later in the half, but the Titans, picking off Clipper passes inside, scored 10 of the next 11 points with four coming from Estevez on a pair of three-shot trips to the foul stripe.

Holden grabbed a missed foul shot to score the last point of the half and put the Clippers up 39-19.

Alex McCabe’s three pointer started the second half, and the Clippers used a balance offense to add another 29 points. For the Titans, junior forward Dominick Miland scored 10 second-half points, Dawson Gindt hit a three pointer while Case Vargo and Mason Vosejpka each made a free throw.

Holden led all scorers with 21 points. He also pulled down 11 rebounds. Rohlfing had 18 points and five rebounds. Baker had 15 points. McCabe had seven steals. Sullivan scored nine points and had six assists.

“We did a real good job moving the ball around tonight,” said Baker. “I’m really proud of the underclassmen. It’s a big boost from early in the week (when the Clippers were dominated by Waterville-Elysian-Morristown).”

Milland led the Titans with a dozen points. Estevez added nine. Starting junior guard Collin Barnett exited the game with a leg injury in the first half while Vosejpka, off the bench, had to be helped off the floor in the second half.

Mueller hurt his thumb in practice and hopes to be back for the Clippers’ next game, their home opener on Friday, Dec. 13 against Cedar Mountain. TCU, 0-2 with the loss, hosts Mayer Lutheran on Tuesday.