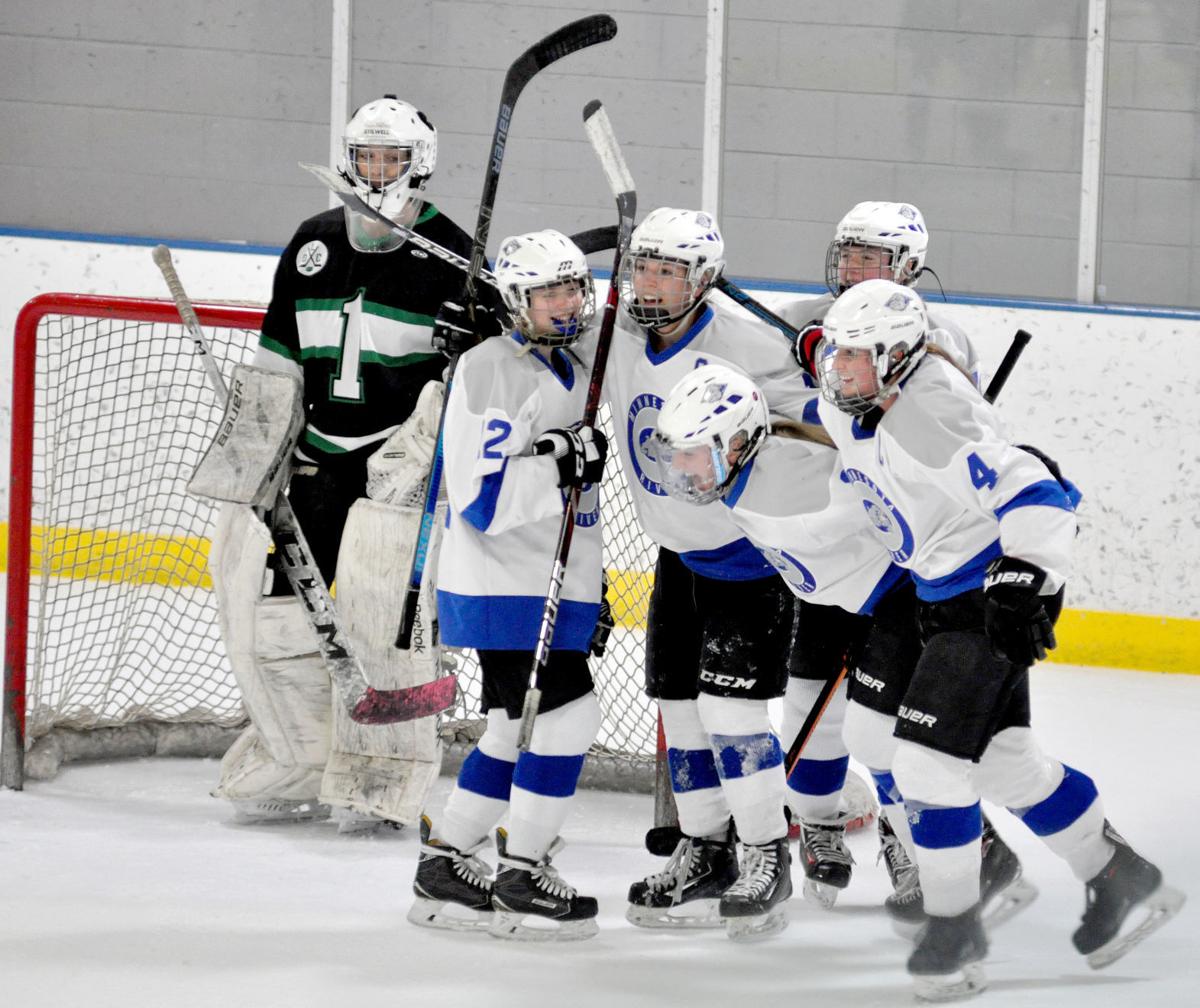 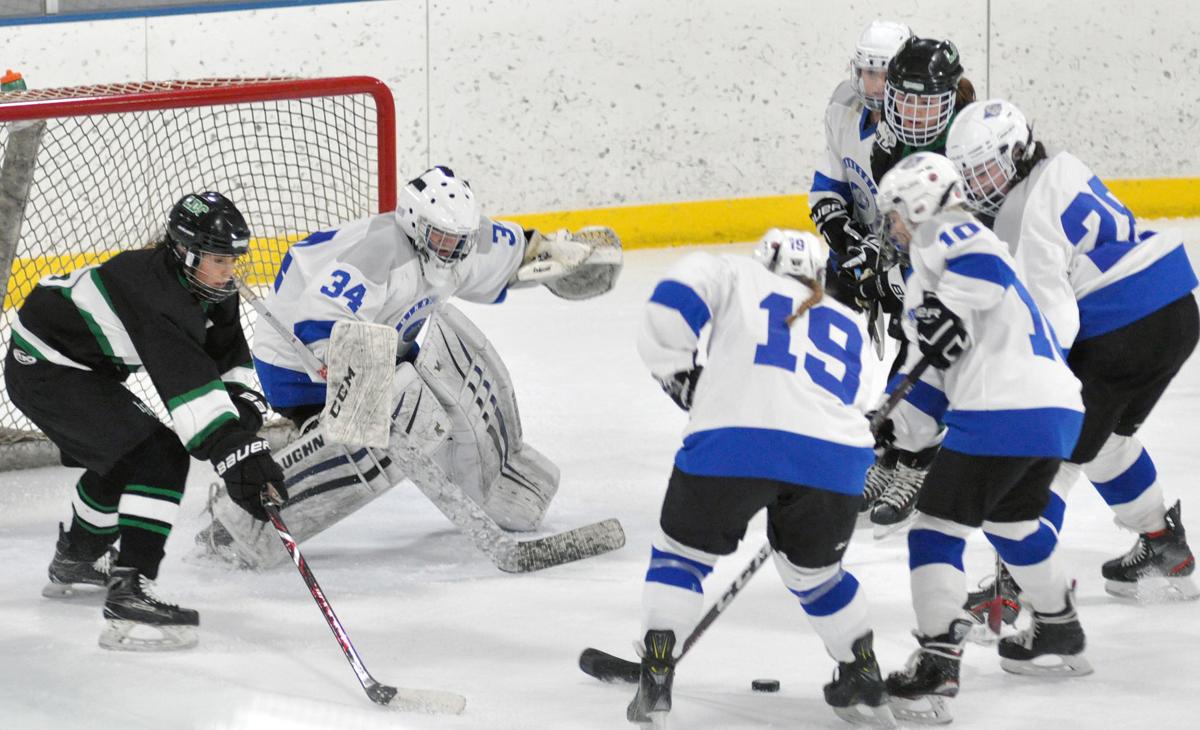 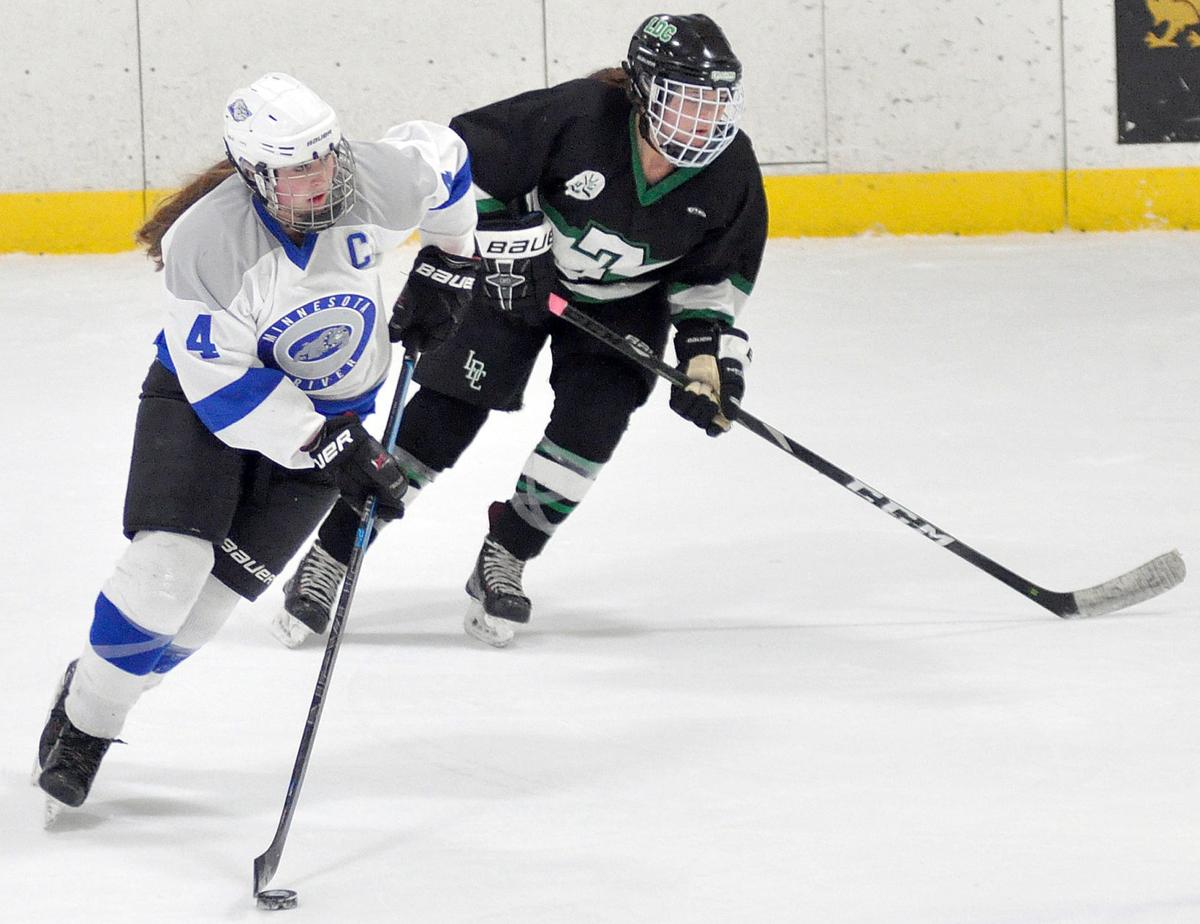 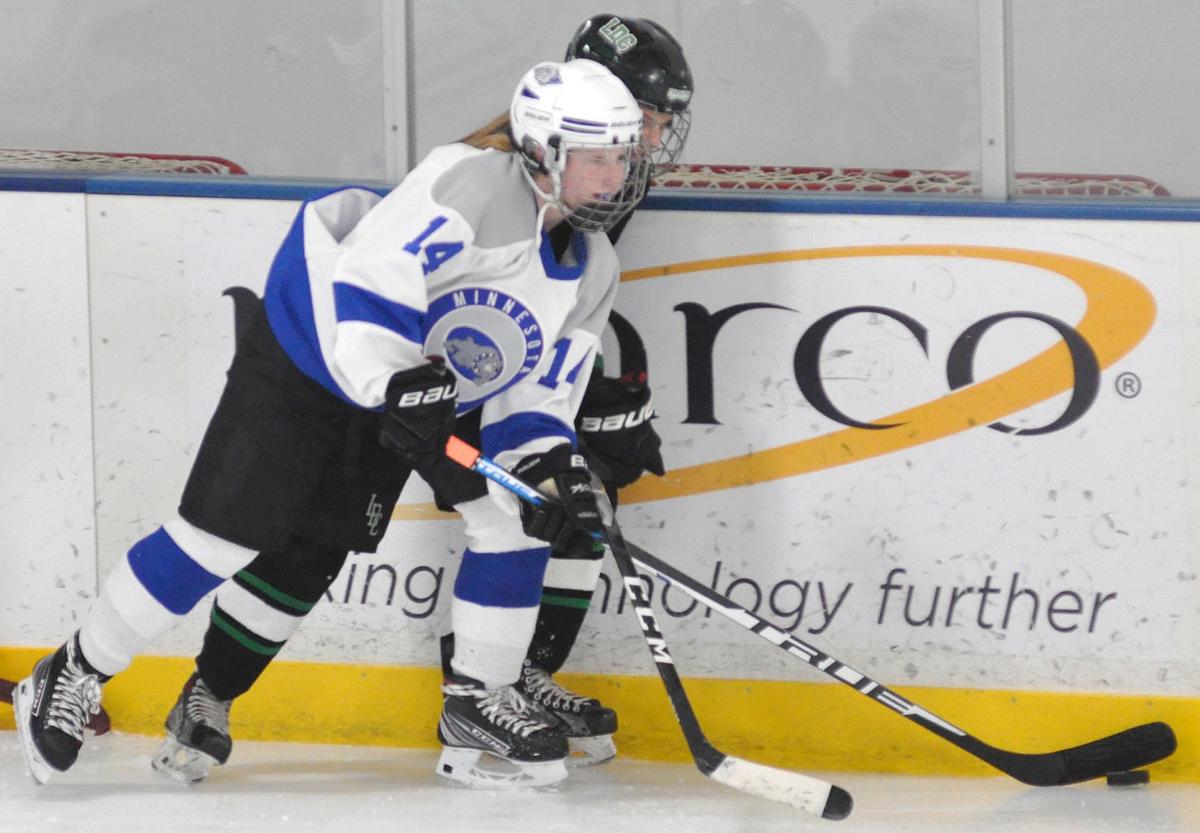 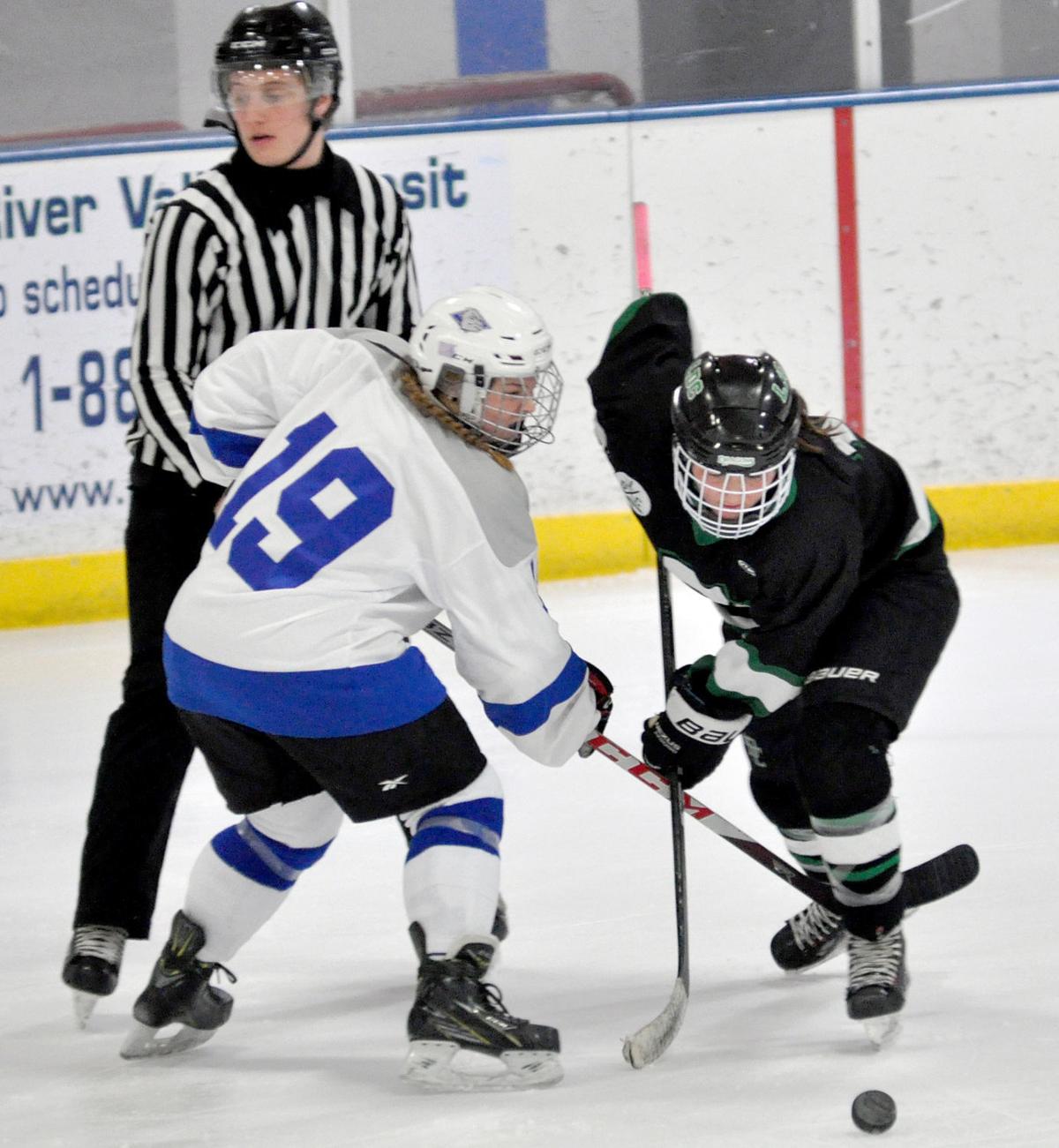 Fighting to the end, the Minnesota River Bulldogs scored twice in the last 6 minutes to defeat Litchfield/Dassel-Cokato 2-1 for the second time this season Saturday afternoon at Le Sueur Community Center.

“We never got discouraged the entire time,” said Bulldogs center Keely Olness, who scored the tying goal and assisted on the winning goal. “We were fighting the whole time. We never gave up. And I think that’s what brought us our two goals in the third period. We knew it was crunch time.”

LDC opened the scoring at 12:34 of the first period on a power-play goal by wing Kourtney Meilke, assisted by defender Emma DeWolf.

Despite intense pressure on both ends of the ice, the score stayed 1-0 until 11:02 of the third period when Bulldogs right wing Emma Seaver sent a pass up to Olness who carried the puck in from center ice and scored to tie it 1-1.

“She sent it through some traffic perfectly on my stick,” Olness said. “Then I put it in the top right side of the net.”

Olness also set up the game-winning goal by left wing Nicole McCabe at 14:11.

“I took the face-off and pushed it forward,” Olness said, “and she came through and one-timed it right into the net, right underneath her elbow, from the left circle.”

The game was a defensive battle of goalies. Both teams had 40 shots on goal. Madi Kisor made 39 saves to earn the win in the nets for the Bulldogs. LDC goalie Avery Stillwell played just as strong, stopping 38 shots on goal.

“Madi was awesome,”Bulldogs head coach Tom Blaido said. “The one that they got, it was on the power play. It was shot from the top of the circle. It looked like a pin ball. It rattled off a bunch of people and went in. She never saw it.”

“The defense kept everything to the outside,” Blaido said. “40 shots on goal, but you think of how many of those shots came from outside the circle.”

Olness agreed that “our defense did a really good job of keeping them outside and keeping shots to outside because it makes easier for Madi to save. Madi stayed strong the entire time, and she kept her head up the entire time.”

That completes a season sweep of Litchfield/Dassel-Cokato (12-8-1).

“They’re a very good team,” Olness said. “We knew they were going to come back mad, so we had to come back more mad. We pushed right through strong.”

Blaido said focused on the basics in practice: “making proper passes and catching passes. I thought we kind of got away from that. The other thing that was did was that every time they had the puck on the end of their stick, we had a body on them. I think this was the best job this team has done that. Every time they came out, we were on them.

“They had a tough goalie, really hard to get by, but they made it happen. That’s what the captains (Keely, McCabe and Ella Boomgaarden) were telling the players: ‘Just keep going. It will happen.’ And nobody ever quit. It’s almost a mirror image of last time when we played them. That game went into overtime.”

Olness has had a break-out season, leading the Bulldogs in scoring with 23 goals and 17 assists for 40 points. McCabe ranks second with 19 goals and 15 assists for 33 points. Seaver- who moved up to the first line midway through the season, has 10 goals and nine assists for 19 points to rank fourth on the team.

Olness said she did a lot of work in the summer that helped her get ready to improve this season. “We confidence is better.

“We just need to keep our heads up,” Keely said.