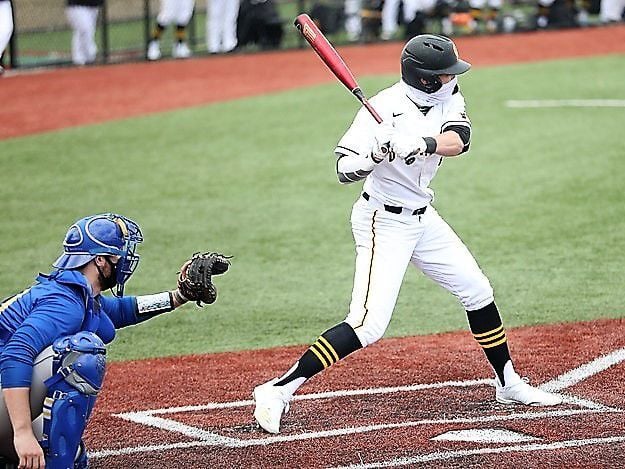 Cole Pengilly of Le Sueur has been selected all-conference in MIAC baseball.

Cole Pengilly of Le Sueur has been selected all-conference in MIAC baseball.

The MIAC announced its baseball awards May 18, and Gustavus has seven student-athletes on the All-Conference Team, including the league’s Player of the Year. Bryce Novak (So., Cleveland) was voted as the Max Molock Player of the Year and joining him on the All-MIAC Team are Ethan Mocchi (Sr., Champlin), Jack Hanson (Jr., Minnetonka), Cole Pengilly (Sr., Le Sueur), Dalton Thelen (Jr., Cold Spring), Weston Lombard (Sr., Stillwater), and Damon Rademacher (Sr., Princeton).

The seven All-Conference selections are the most in program history for Gustavus baseball.

Playing in all 21 conference games, Novak posted a .471 batting average with 41 hits in 87 at-bats. Novak’s 41 hits break the MIAC record for hits during the league season, previously held by Gustie Ben Sherer (39-76) in 2004. Novak scored 20 runs with eight doubles, a triple, three home runs, and 13 RBI. He drew eight walks, struck out just five times, and never grounded into a double play. His slugging percentage was .690 and he reached base more time than not with an on-base percentage of .516. Novak was not shy on the base paths, going 11-for-13 in stolen base attempts.

Novak played primarily as the center fielder but also made three starts on the mound, posting a 3-0 record and 1.93 ERA in 14 innings. He allowed just six hits and three runs with 15 strikeouts and five walks. Opponents hit a pedestrian .130 against Novak.

Novak is the first Gustie to earn MIAC Player of the Year honors since Tony Konicek won the award in consecutive seasons in 2006 and 2007. Sherer won the award in 2004 and Brad Mazer in 2002 as the only other Gusties to receive the honor since its inception in 1985. Novak is also the first sophomore to win the award since Sherer in 2004.

Making his second appearance on the All-Conference Team, Pengilly started every game at shortstop with a .359 batting average (28-78) with 20 runs, four doubles, two triples, one home run, and 13 RBI. He slugged at .500 and reached base at .435. Pengilly was 8-for-9 in stolen base attempts. In the field, Pengilly had 24 putouts with a team-high 50 assists and seven errors for a percentage of .914.

Lombard served as the team’s ace of the pitching staff this season, making seven starts in league games with a 5-0 record and 1.43 ERA in 44 innings. He had two complete games, highlighted by a nine-inning no-hitter against Bethel on April 26. Lombard finished the league season with 21 hits allowed, 10 runs (seven earned), and 56 strikeouts compared to 11 walks.

Rademacher was the team’s top reliever out of the bullpen, making 11 appearances during the league season with a 5-0 record and 0.47 ERA in 19 innings. Rademachers led the team with two saves. He allowed nine hits, two runs (one earned) with 23 strikeouts and nine walks.