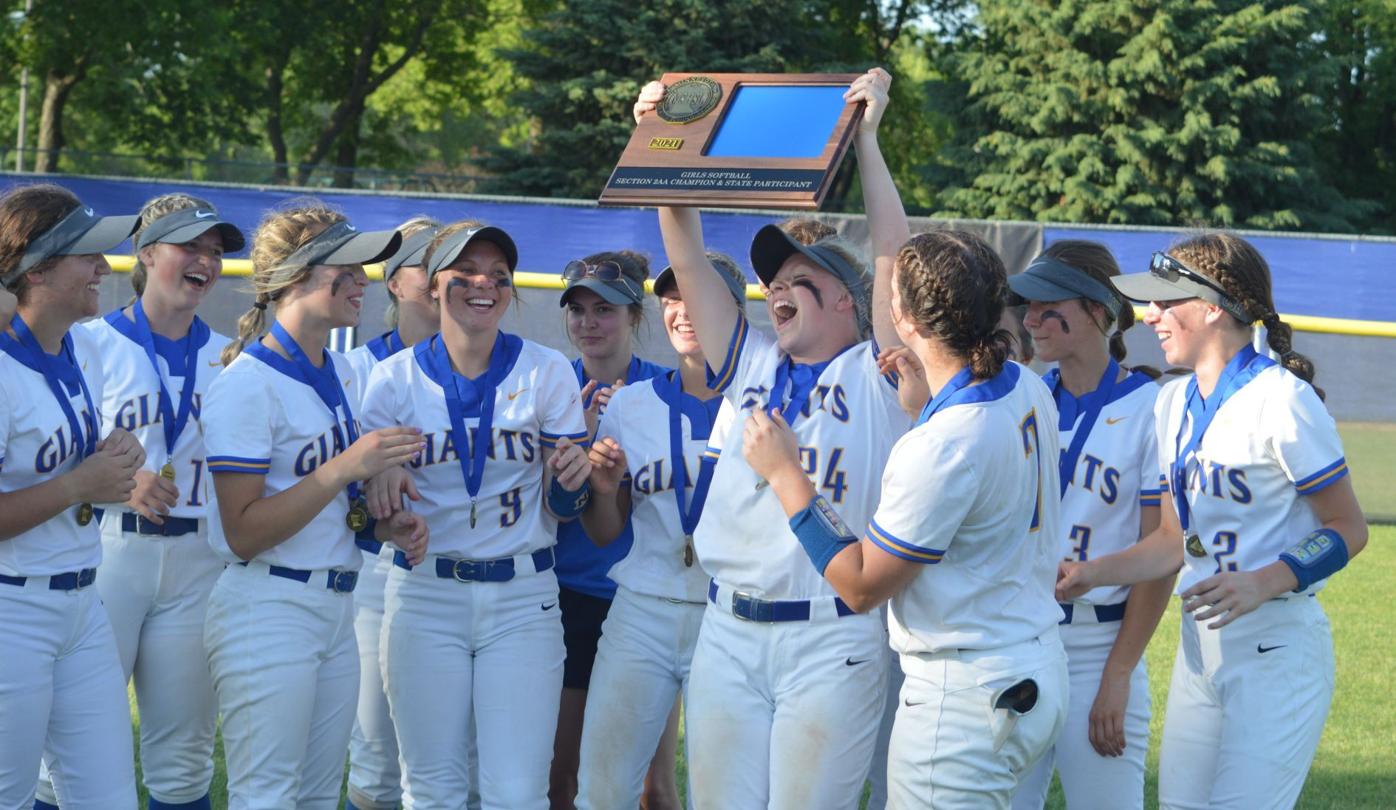 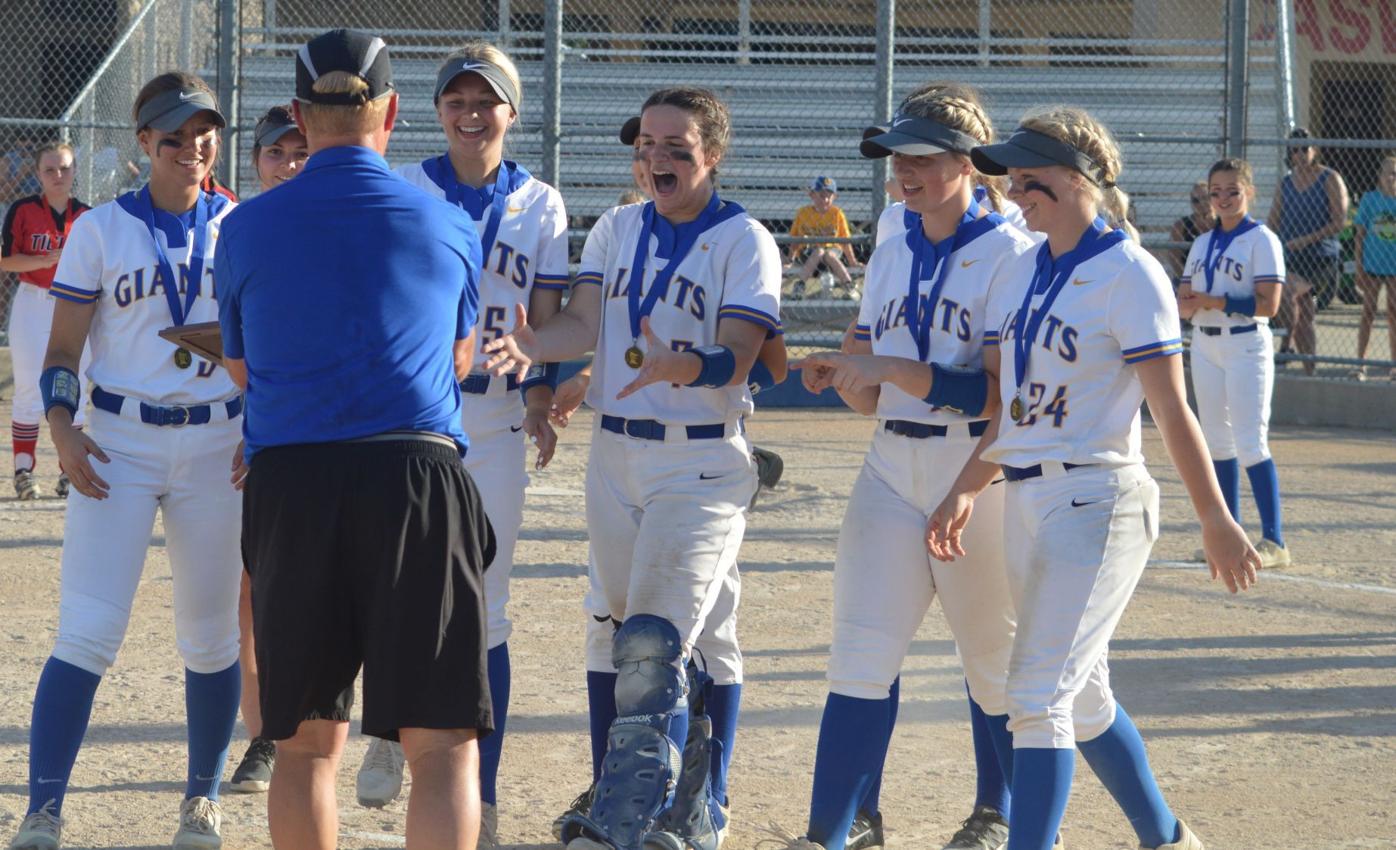 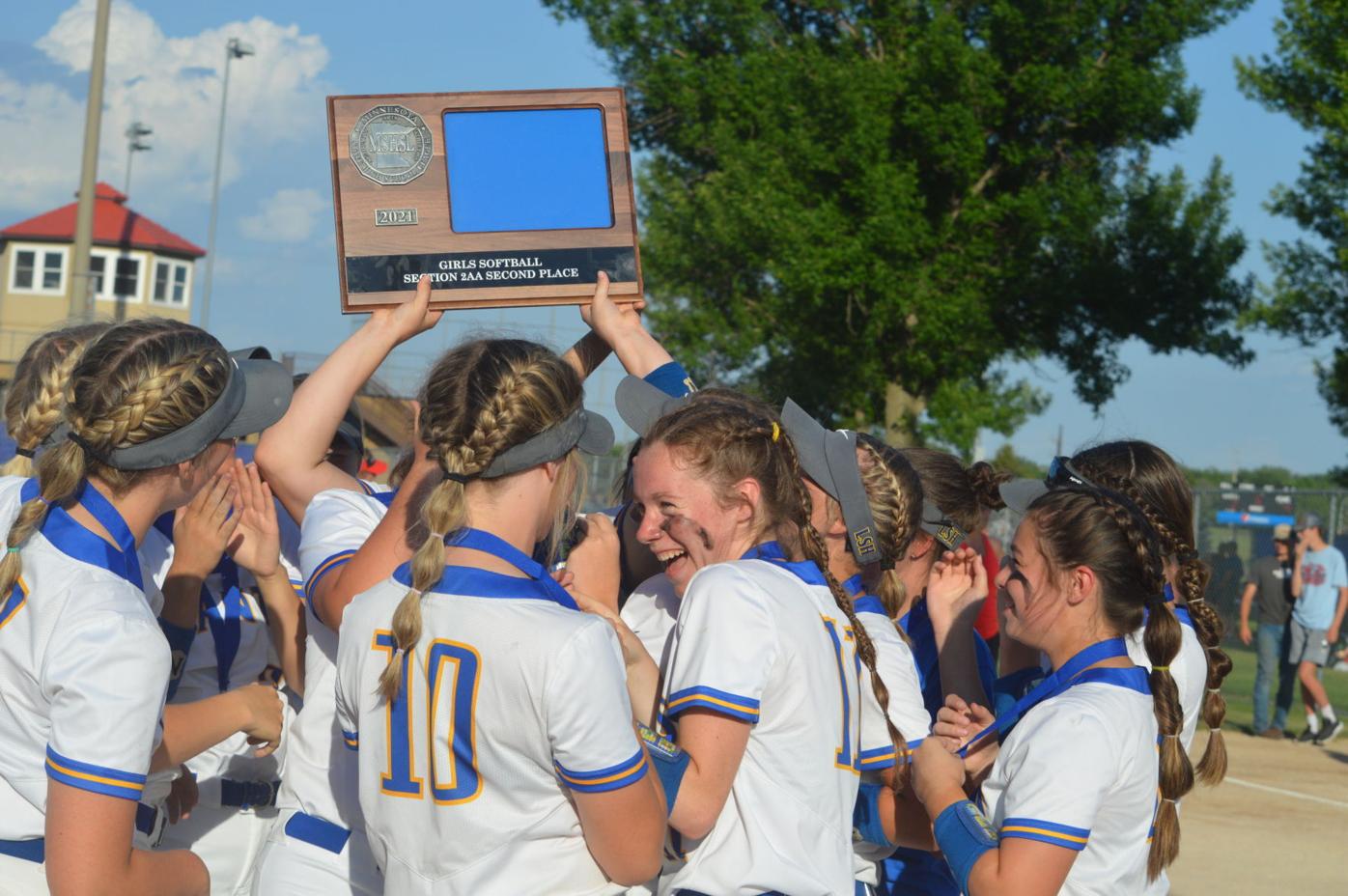 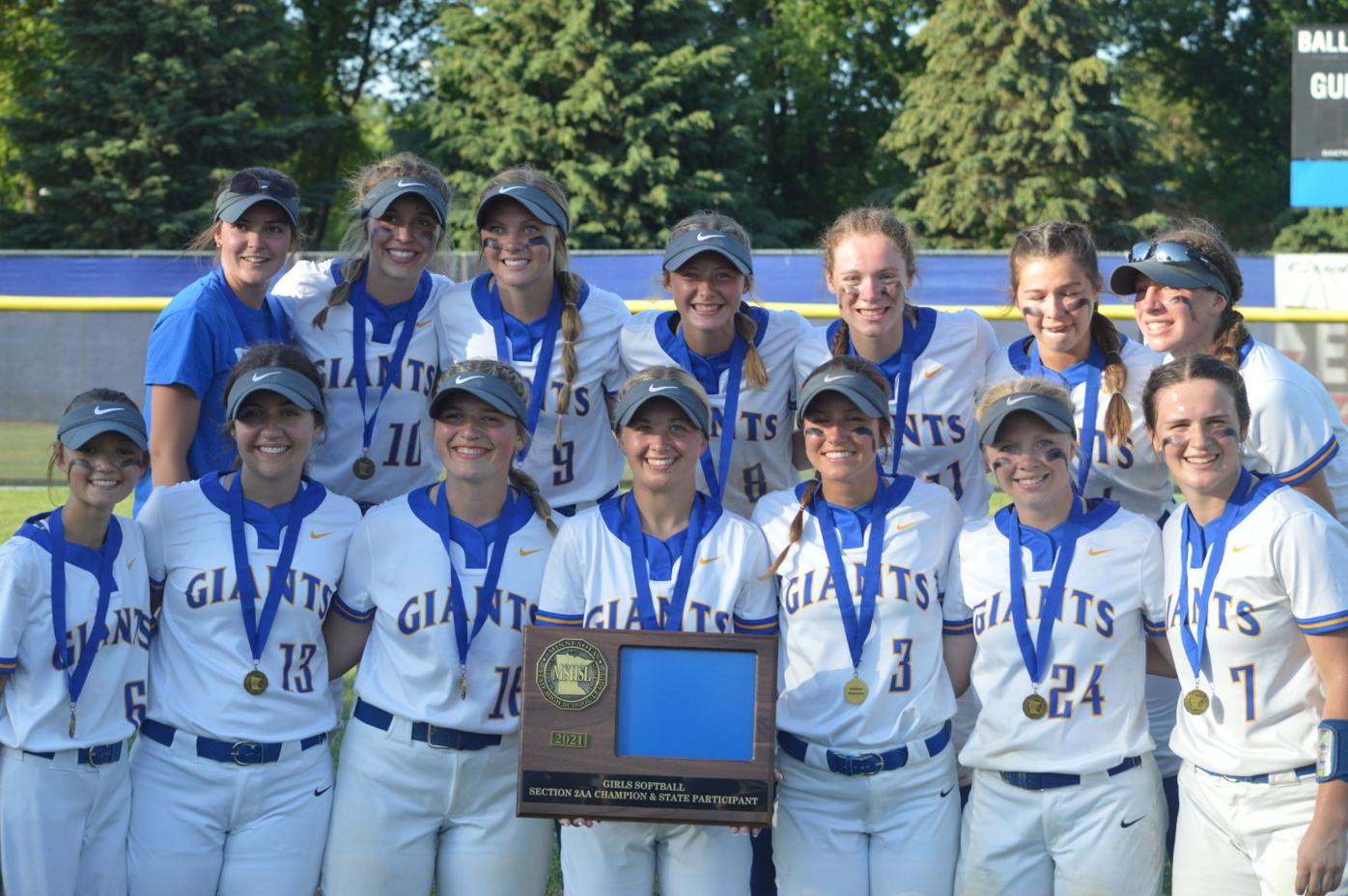 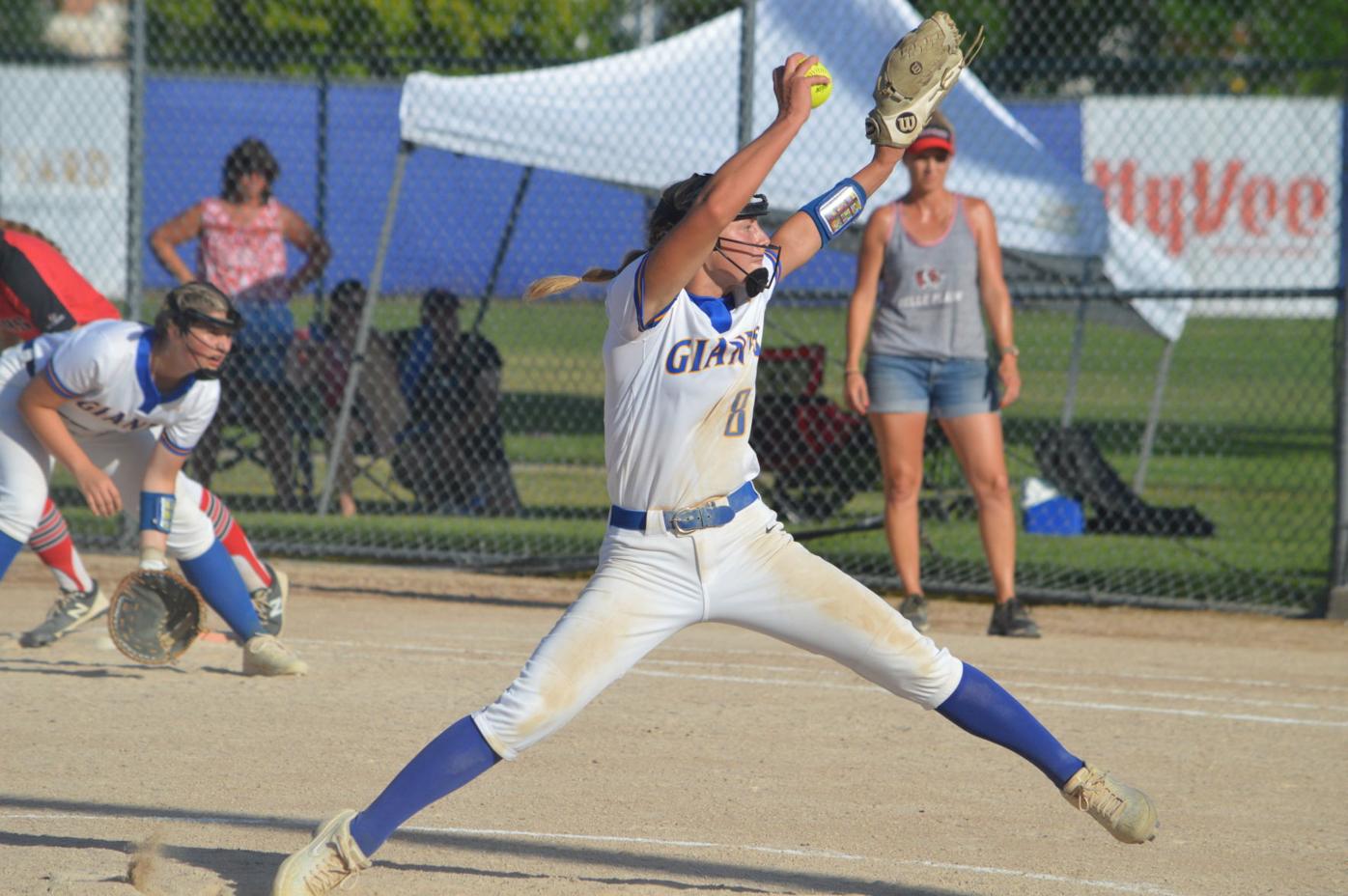 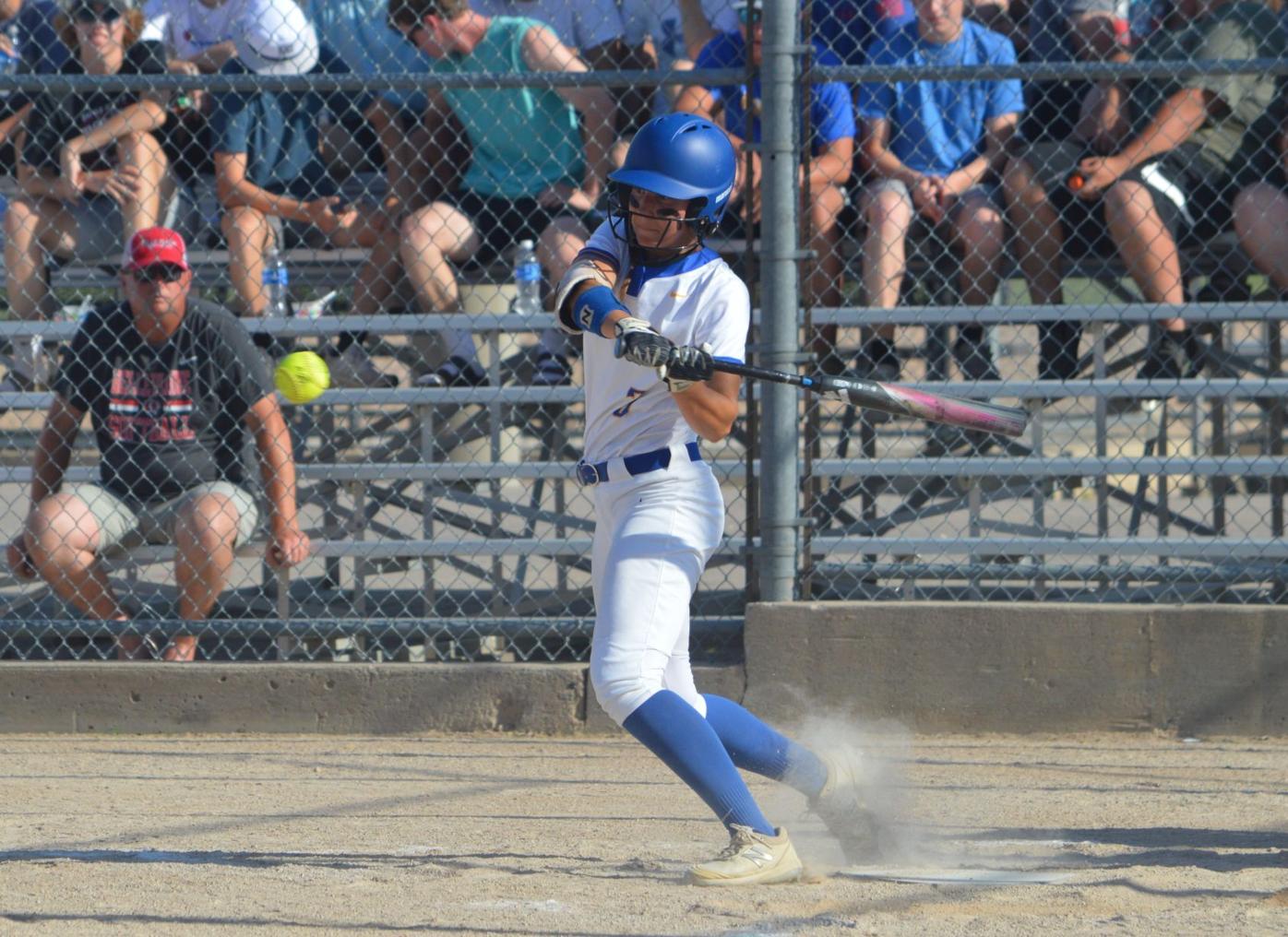 Halle Bemmels swings at a pitch from Belle Plaine in the Section 2AA championship game. 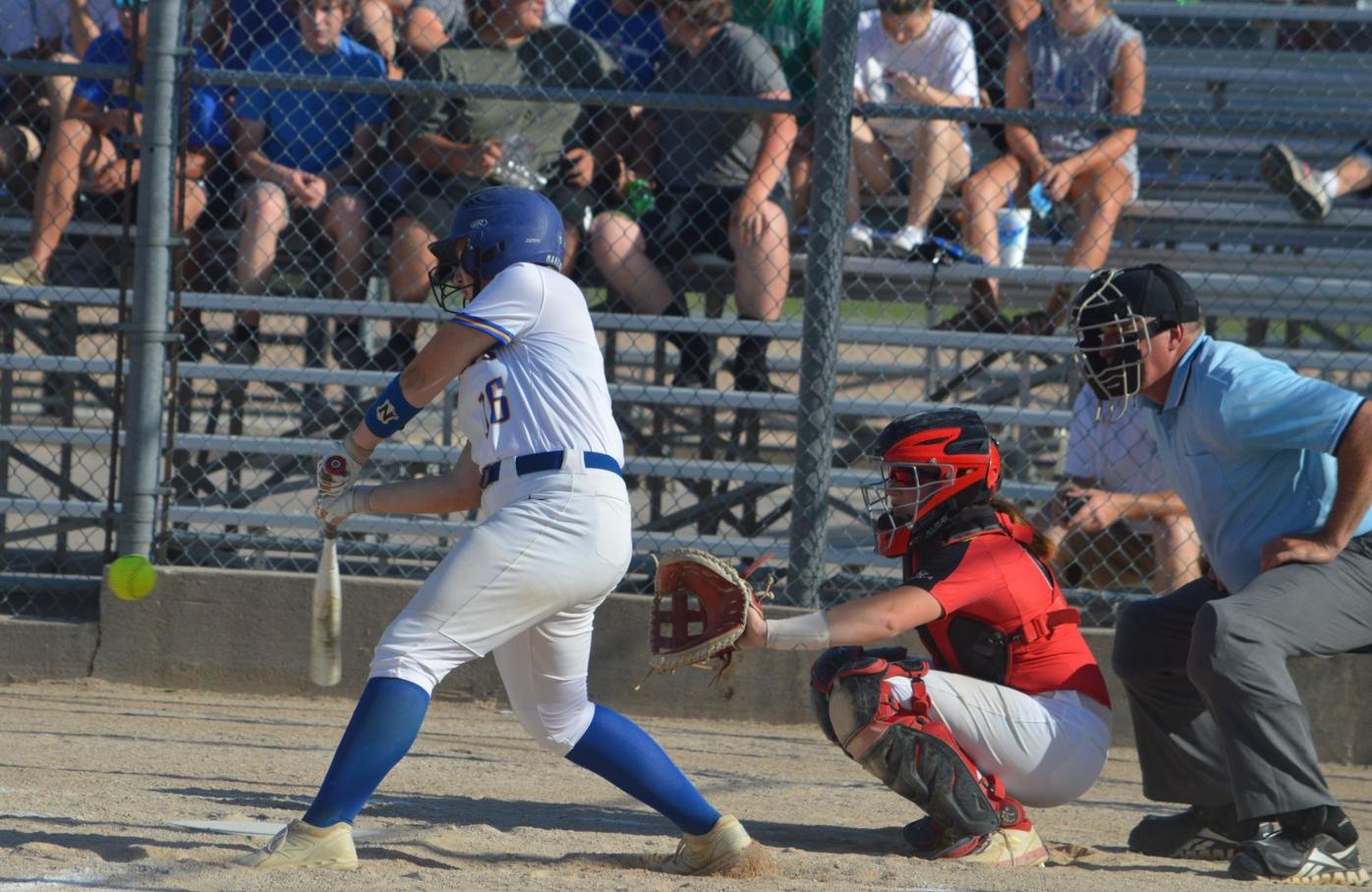 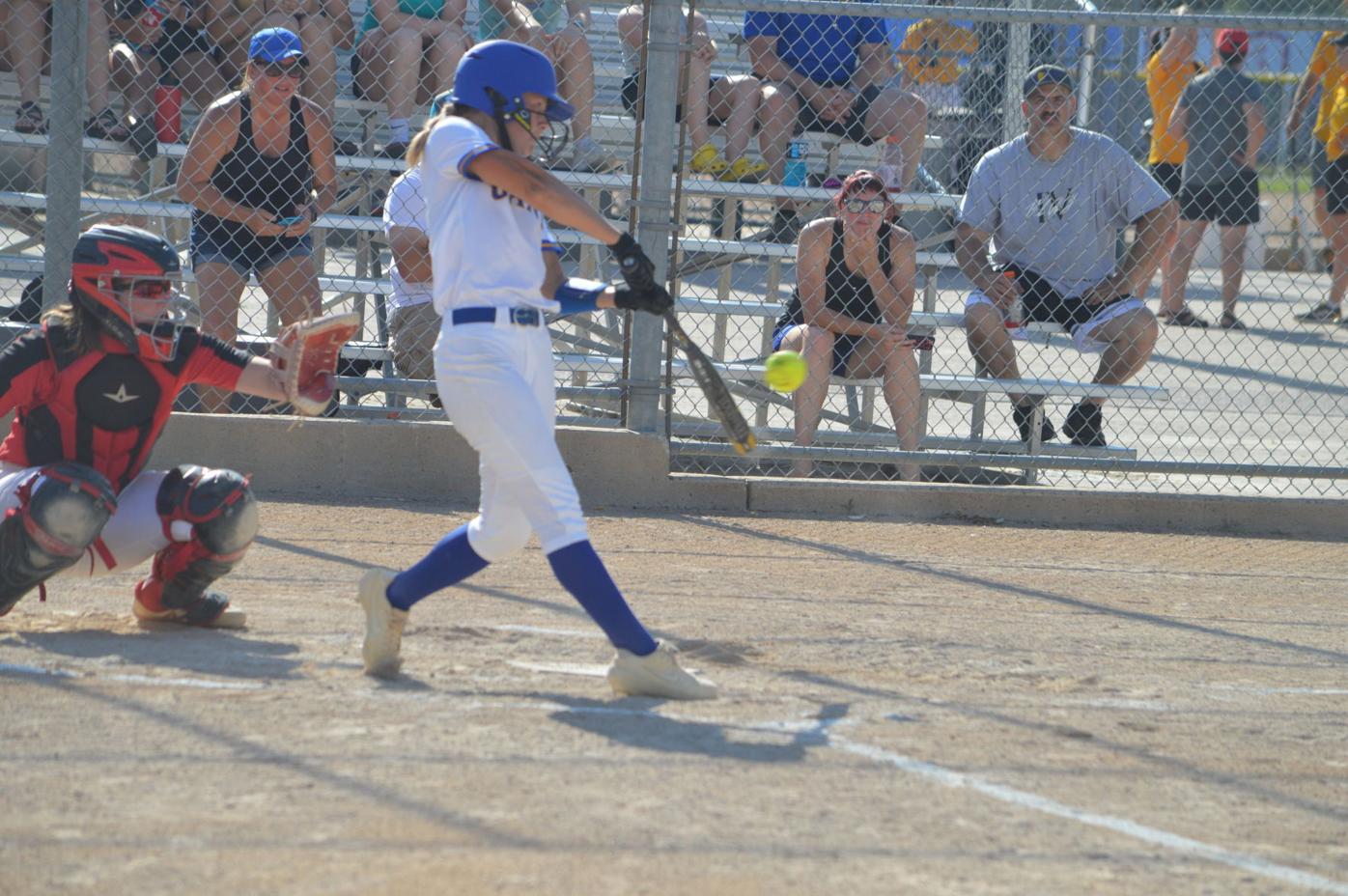 Chloe Brandt swings at bat in the second inning of the section championship game against Belle Plaine. (Carson Hughes/southernminn.com) 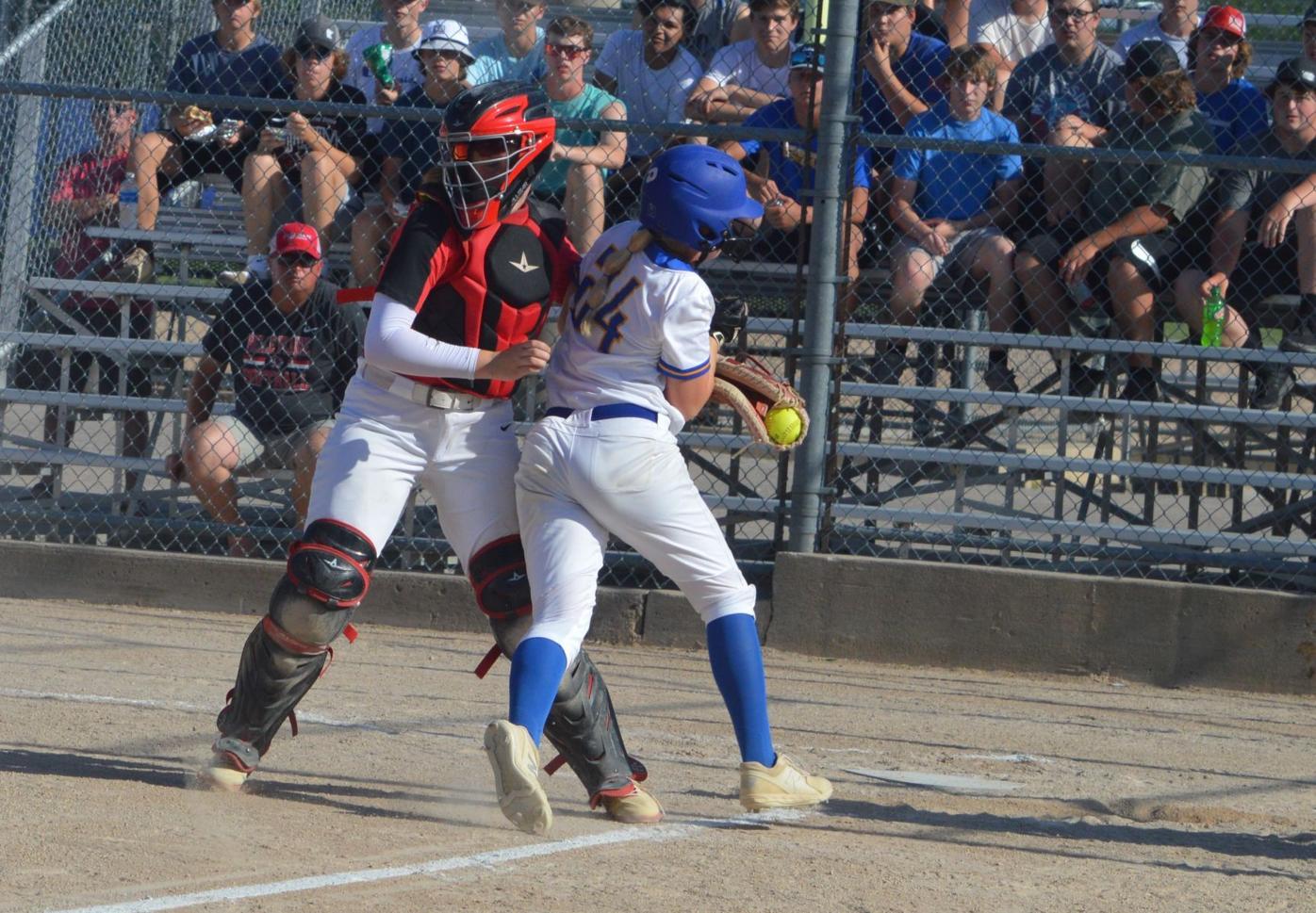 Olivia Fritz is tagged out by the Belle Plaine catcher before she can reach home. (Carson Hughes/southernminn.com) 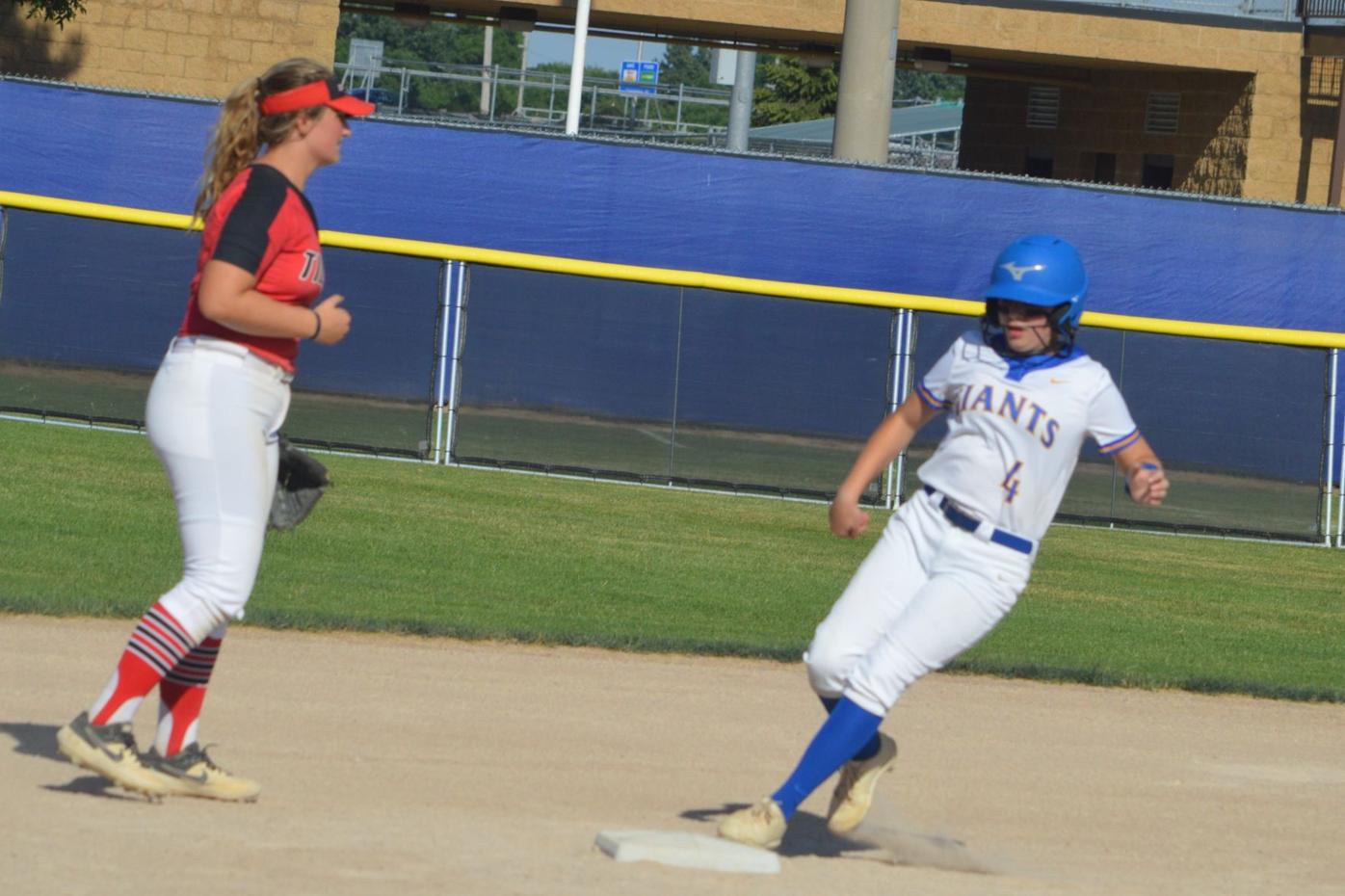 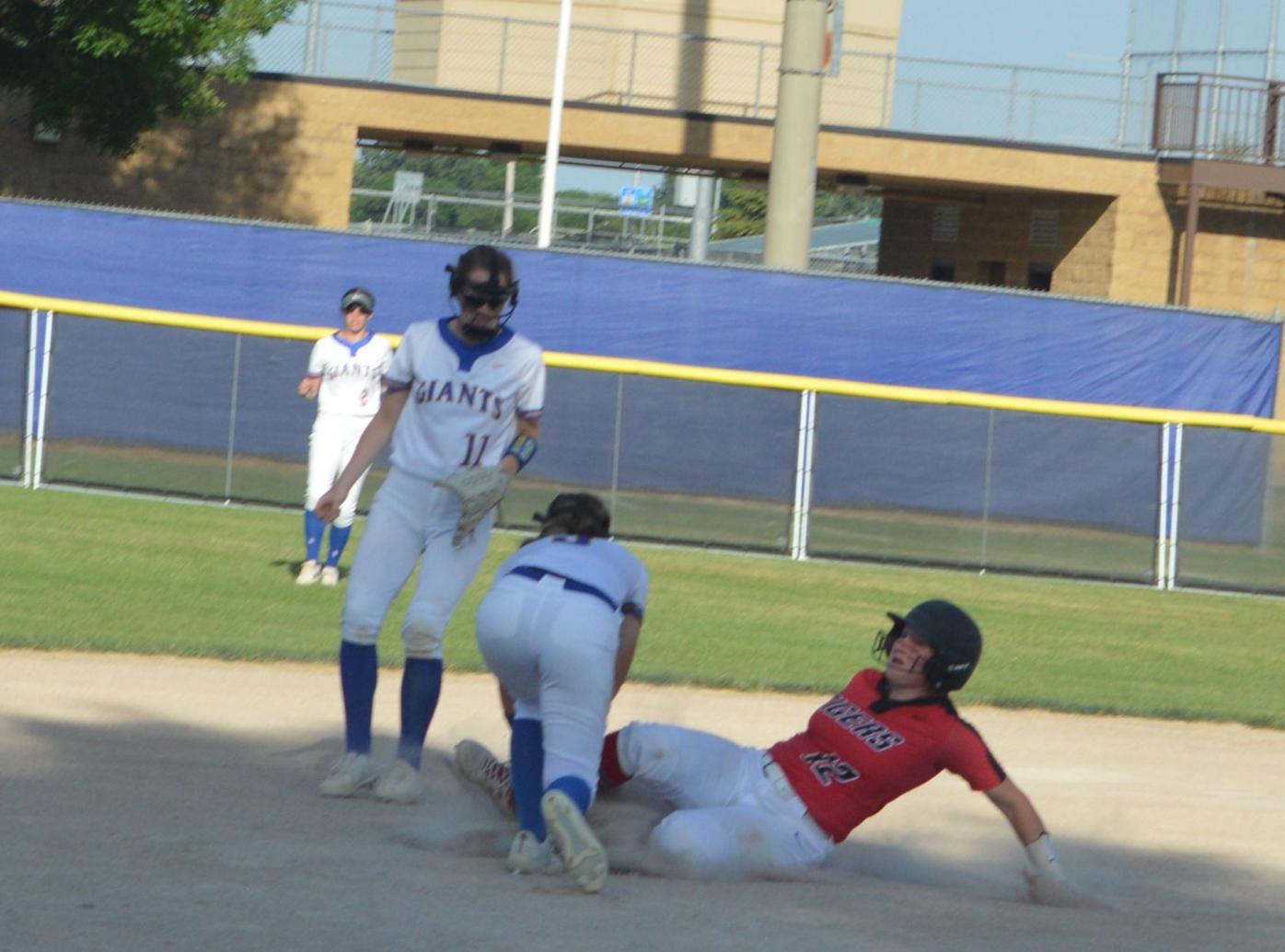 The Giants tag out a Belle Plaine runner at second base. 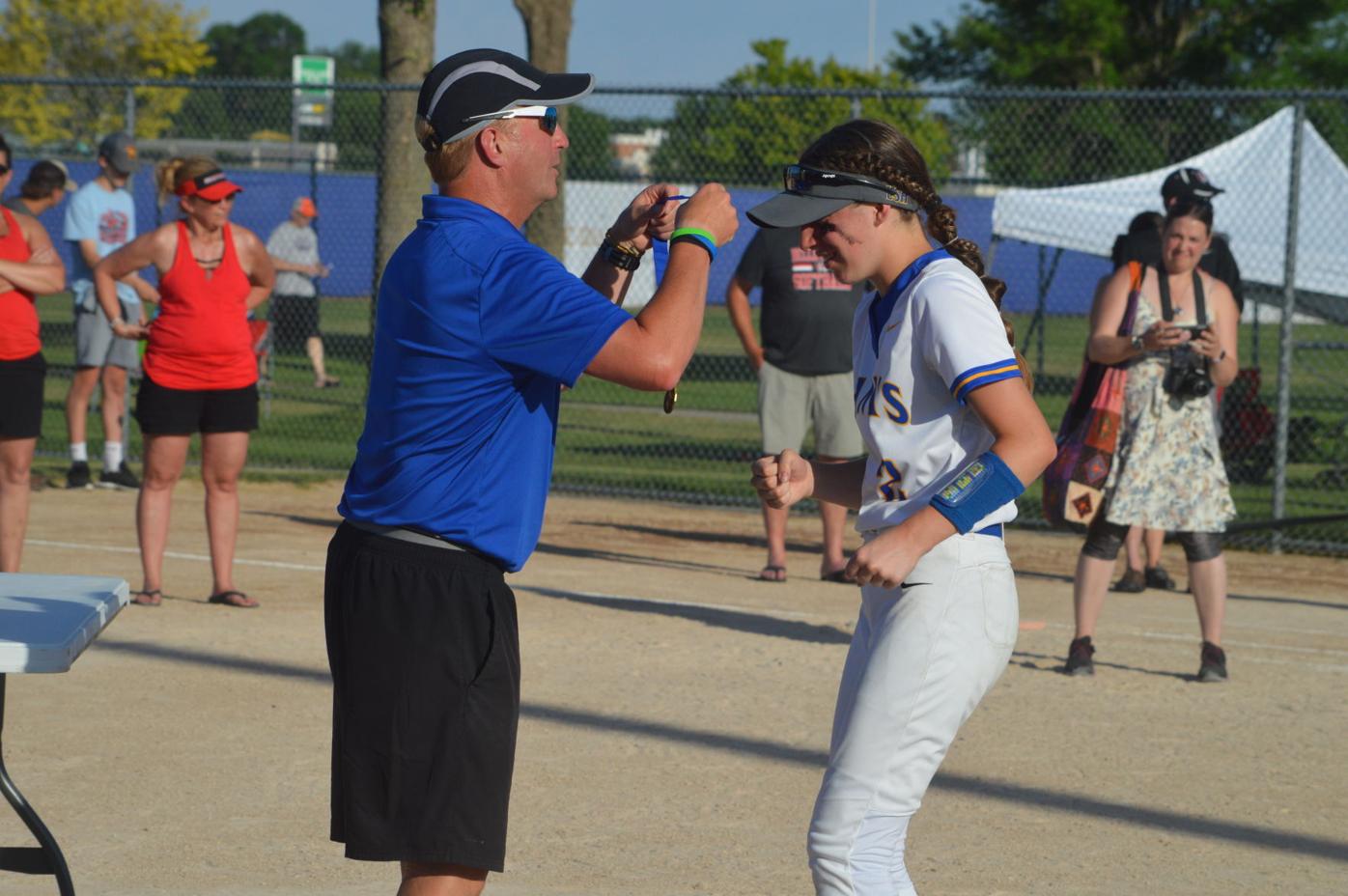 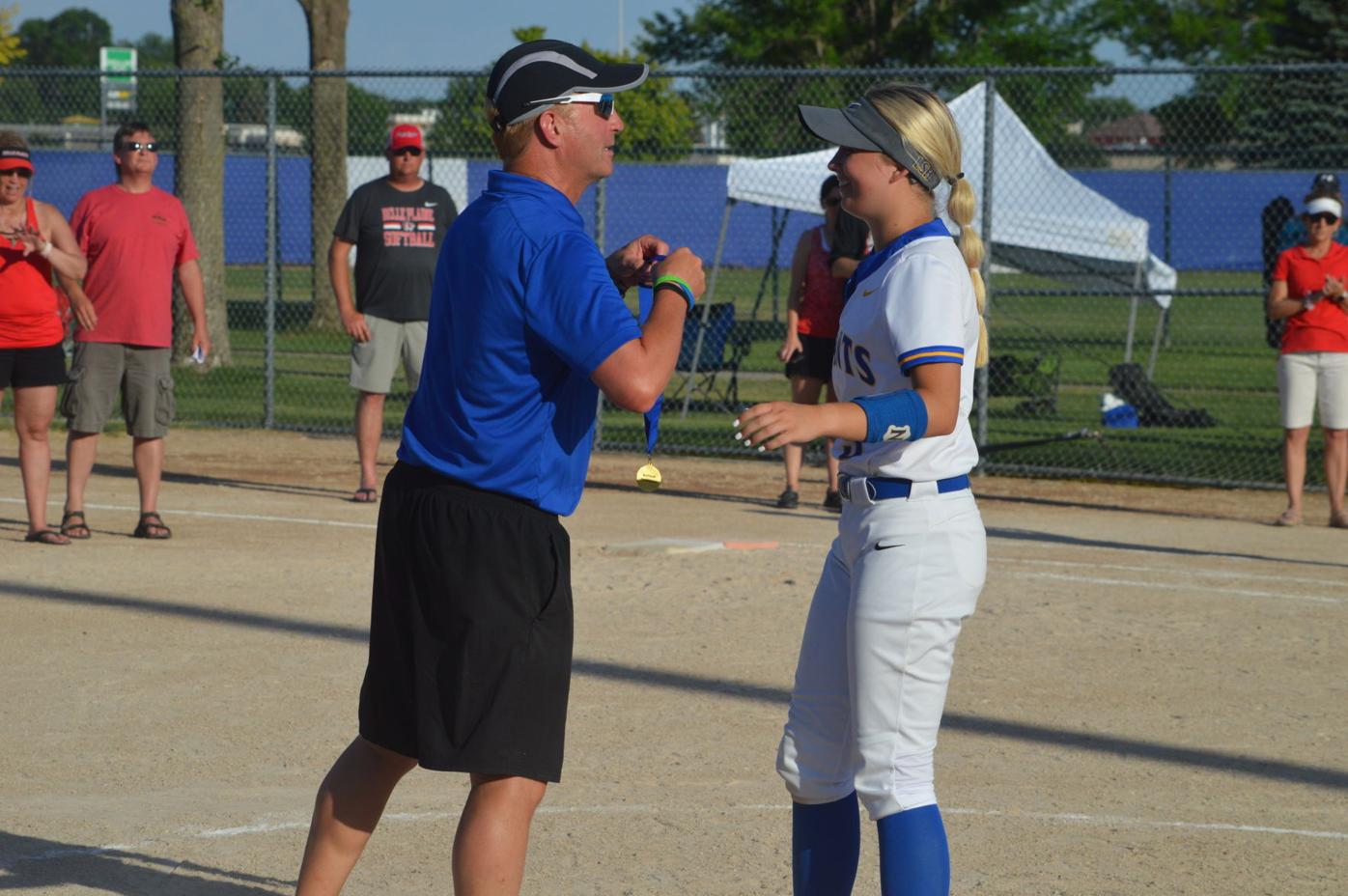 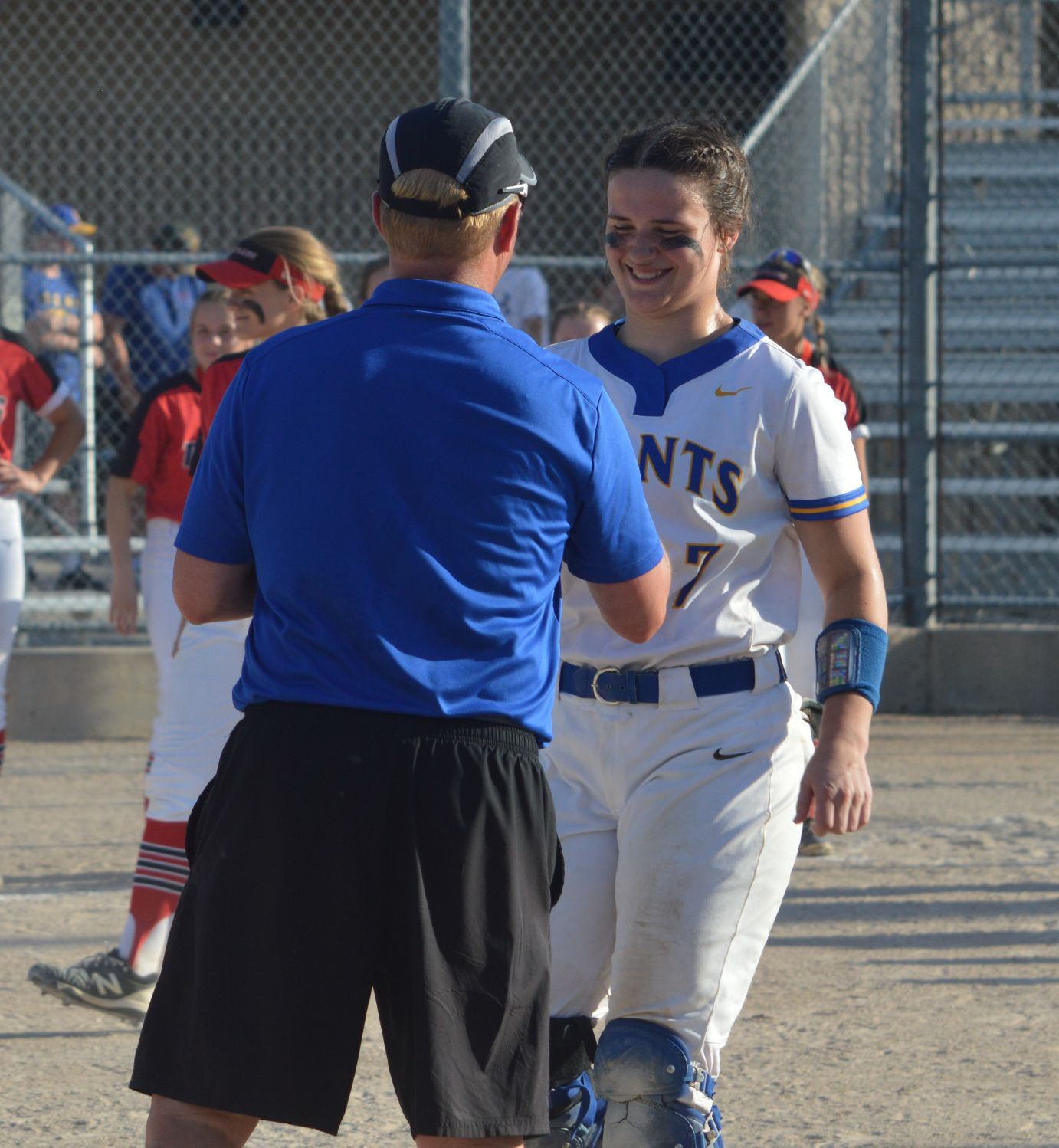 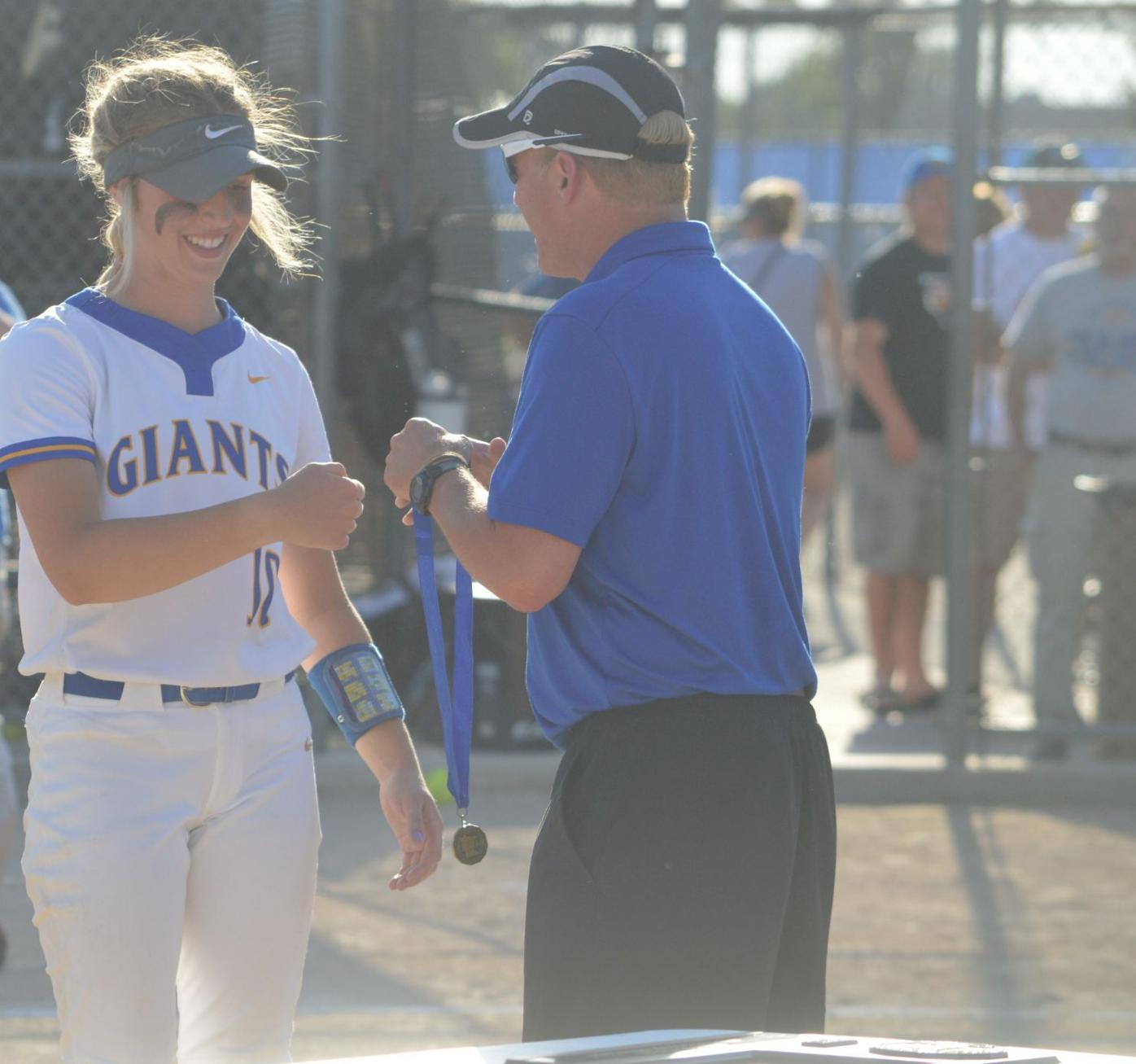 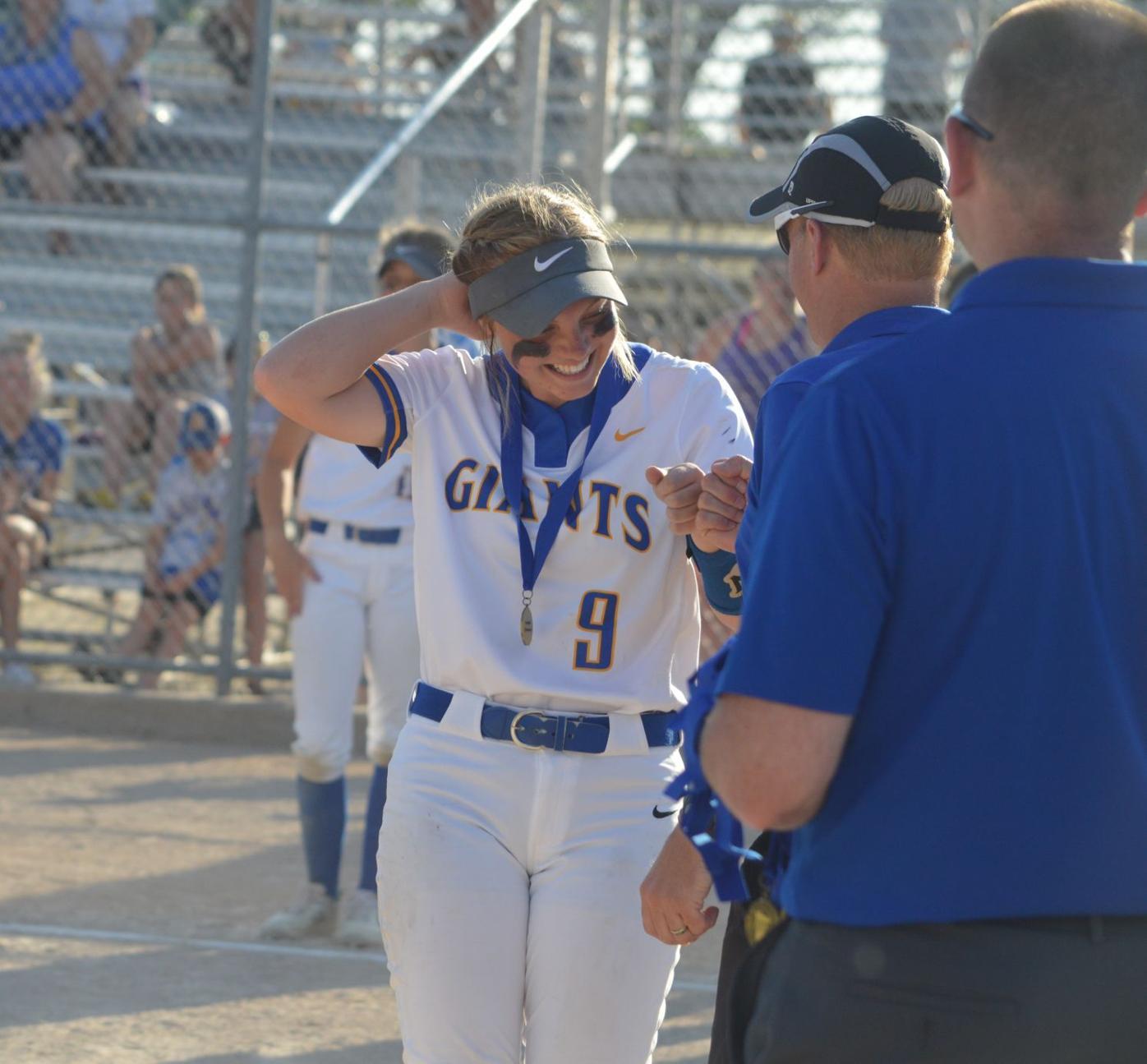 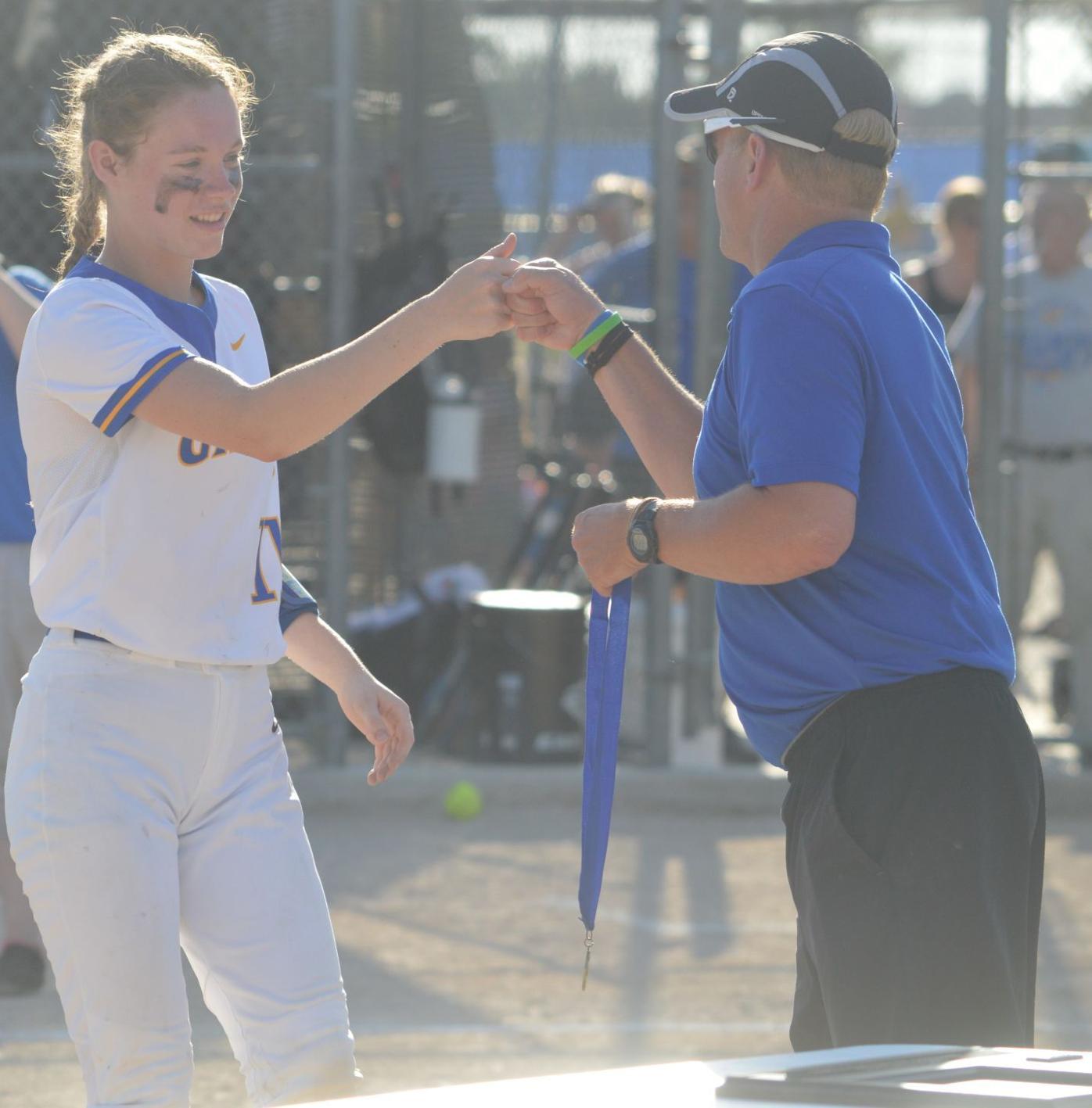 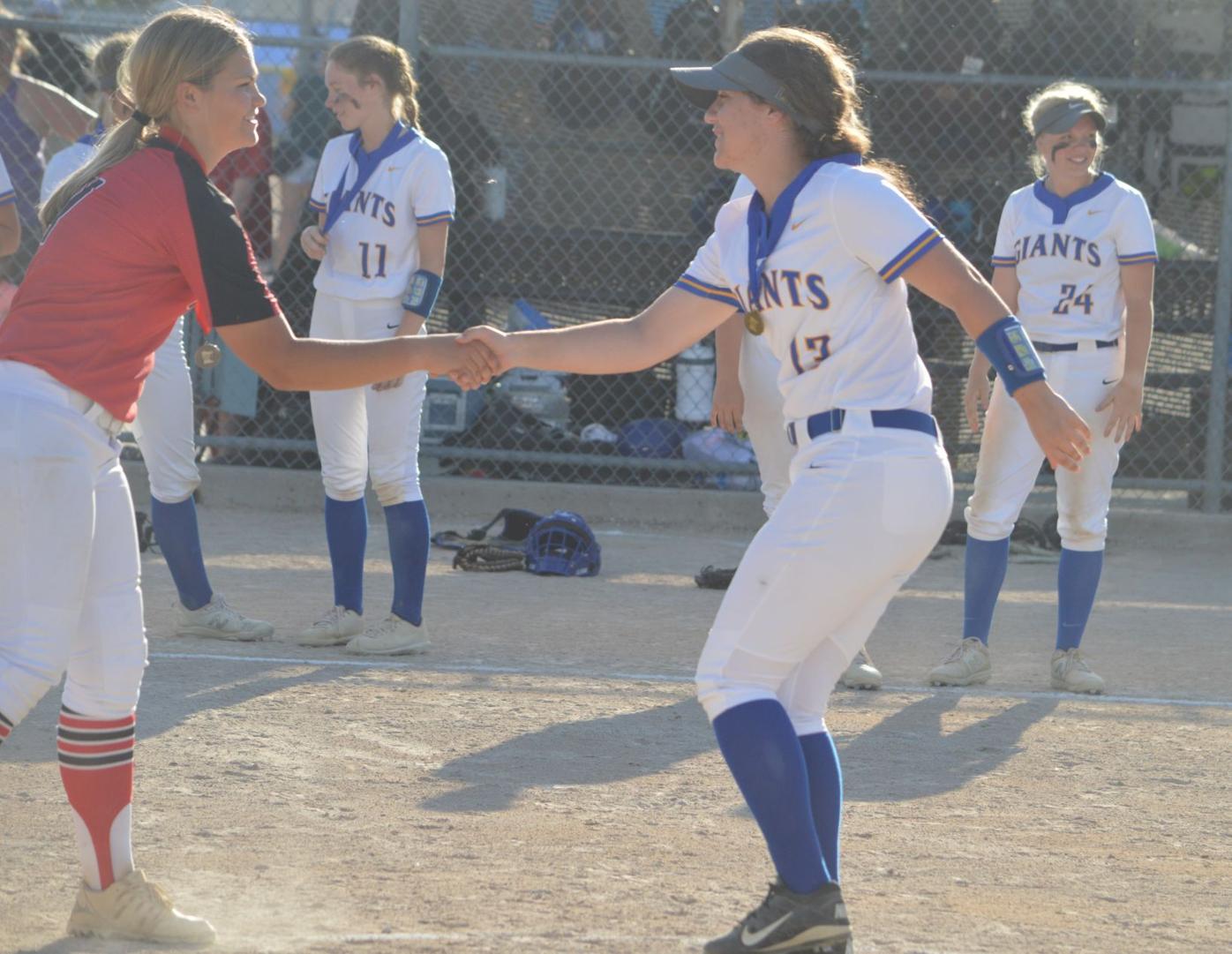 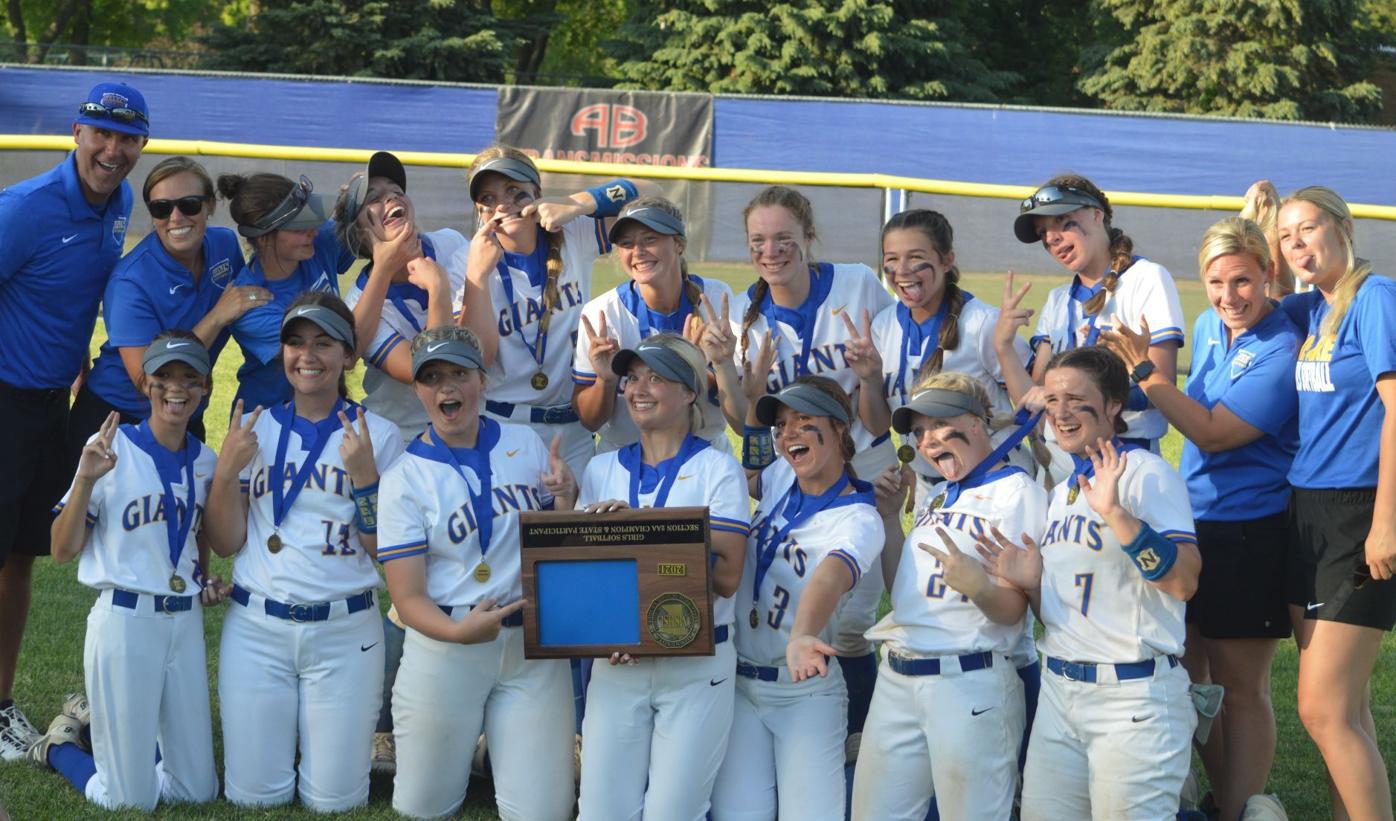 The Giants are on their way to state. After an incredible 21-1 season, the Le Sueur-Henderson softball team climbed into the Section 2AA championship on Thursday at Caswell Park after topping Belle Plaine for the fourth time. With an aggressive, “score at any cost” mentality, the Giants took every opportunity to steal bases and bunt runners home with sacrifice plays. The high risk came with high rewards and the Giants lifted their first place trophy high after defeating the Tigers 7-2.

“It never gets old,” said Coach Eric Lewis after the win.

The Giants came into the game with victory in the back of their minds. Belle Plaine was a team the Giants defeated three times before, most recently in the Section 2AA semifinals. But those victories weren’t easy. Belle Plaine rarely gave up more than a single to the Giants, so they had to make use of every batter on base.

“It’s hard to beat a team four times,” said player Rhyan Fritz. “So we had to bring our A game and play like we know how to play.”

But the Giants were no slouch on the field either. Pitcher Chloe Brandt kept the Tigers scoreless for five straight innings by striking out 11 while giving up seven hits.

The Giants solid defense gave batters cover to slowly stack runs on the board. Halle Bemmels opened the bottom of the first hitting a double. Brandt advanced Bemmels to third with a sacrifice bunt and Zoe Thomson knocked her home with a single. The Giants were struck out soon after, reinforcing the need to rack up runs any way they could with limited time on base.

“We just kept thinking if we added one run every inning, that would be enough by the time we won,” said Lewis.

LS-H followed a similar strategy in the second inning. Samantha Wilbright led with a walk and advanced to second as Sara Milam reached first on an error. Makenna Borchardt sacrificed both batters up a base on a bunt, and Wilbright scored on a single by Madi Wilbright. The Giants loaded up the bases as Bemmels walked to first, but the Giants’ attempts to score further were cut short by the Tigers. Brandt stepped up to the plate and lined out to shortstop, while Milam made a dash for home. Before she could slide in, the Tigers threw the ball to the catcher and Milam turned around and headed for third. But Milam was tagged out on third, and the Giants ended the second inning with a 2-0 lead.

The Tigers’ field game was tough to get around. Things looked promising in the third as the Giants scored a quick run. Thomson singled and courtesy runner Morgan Gregersen reached third on a single by Olivia Fritz before scoring on a single by Samantha Wilbright. With Fritz on third and Wilbright on first, Milam prepared to send another batter home. But the Tiger’s coordination on the field stymied the Giants potential gains. Milam grounded out to the pitcher, who then threw the ball to home to knock out Olivia Fritz. Wilbright rushed to second and reached third after the left fielder failed to catch a passed ball before reaching home, scoring a fourth run.

Up 4-0 in the fourth inning, the Giants weren’t as secure as they wanted to be, but fortunately they were about to have their best inning yet. Borchardt led with a walk, and courtesy runner Dalaney Pavlo reached second on a sacrifice bunt by Madi Wilbright. Brandt then took a walk. Rhyan Fritz then knocked both batters in thanks to an error by the Tigers. Belle Plaine was caught off-guard as Fritz hit a line drive into right field. Pavlo scored on an error as the right fielder went after the ball, Brandt rounded the bases on the same error and Fritz ran from first to third. Thomson then singled in Brandt, scoring a total three runs and nearly doubling the Giants lead from 4-0 to 7-0.

But runs started to dry up for the Giants, and the Tigers bolstered their advance. At the top of the fifth, Belle Plaine loaded up the bases with three singles. A last minute ground out on first base prevented Belle Plaine from scoring. But for the first time all game, the Giants failed to score as the Tigers knocked them out 1-2-3 in a strikeout and two ground outs.

Belle Plaine posed an even greater threat in the sixth inning. In a walk, a double and two singles, the Tigers scored their first two runs of the game with no outs on the board. But Brandt gave the Giants exactly what they needed and pitched three strikeouts in a row to stop the Tigers. But like Belle Plaine, LS-H was also knocked out 1-2-3 in the bottom of the sixth.

It all came down to the seventh inning. At 7-2, all the Giants needed was to prevent the Tigers from tying up the game. Despite Belle Plaine’s late game gains, they were no match for LS-H in the end. Catcher Zoe Thomson caught a pop out at the top of the inning. The Giants gave up a single, but the runner was soon tagged out on second on a fielder’s choice. The next batter grounded out at first and just like that, the Giants were section champions.

The crowd erupted in cheering and the players swarmed the field. All gathered into a group hug at the pitcher’s circle celebrating their victory. In honor of their accomplishments, players on both teams were awarded first and second place trophies. The Giants were then handed what they thought was the first place trophy. After some group photos, Zoe Thomson recognized they were given the second place trophy by mistake and ran over to Belle Plaine to swap. The girls cheered once again as Thomson retrieved the proper trophy.

Samantha Wilbright was the Giants’ top scorer with two runs and one RBI. Thomson led in RBIs with two over three hits. Bemmels, Brandt, Rhyan Fritz, Pavlo and Gregersen each contributed one run.

“We put the ball in play when we needed to, we scored when we needed to and we capitalized on their errors when we had to,” said Coach Anne Lewis. “We made a few mistakes today, and that’s going to happen in big games like this with kids that have never been here before. But they fought hard and they did it.”

After winning the section championship, the Giants will compete against the rest of top eight teams in Class AA. The first games are scheduled for 1 p.m. Tuesday, June 15 at Caswell.

“The eight best teams in the state will be there, so you never know what’s going to happen,” said Eric Lewis. “We play as well as we can play, we’ll give anybody a game.”

The players were hopeful about their chances.

“Obviously we want to win it all, but every team wants to and I’m very confident in our capability of doing that,” Brandt said. “I that think if we work hard enough, we can end up winning.”