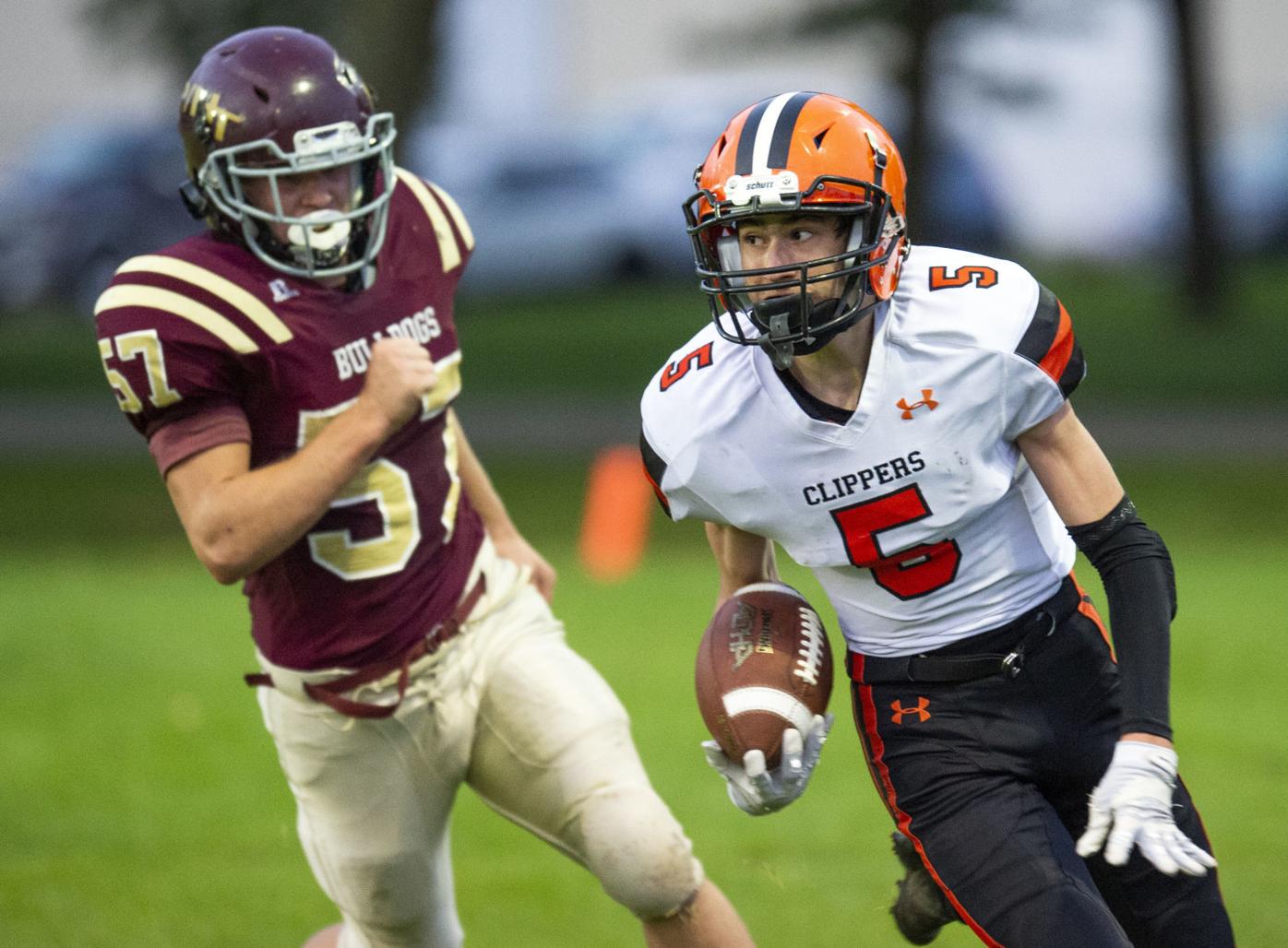 Despite being outsized, outnumbered, and hampered by key injuries, the young Clippers played well enough to win...almost.

“It would have been good for us, for our moral,” said assistant coach Kyle Atherton, who runs the Clipper defense. “We’re losing a senior a week. And there were a lot of penalties tonight. There are certain penalties that are silly and some you just can afford some times, but we have too many silly ones. We have guys running free for 20 yards, and we decide to put a hand on somebody’s back. We don’t have to do that. We have to mature and get better.”

On a LP/HT 4th and 1 after the opening kickoff, junior outside linebacker Cameron Seely stopped a screen pass to end a drive that took the Bulldogs all the way to the Cleveland 19. Each team punted in their next series, but then the Clippers drove 60 yards for the game’s first touchdown.

After a couple of plays for negative yards and a costly penalty, quarterback Alex McCabe sprinted 31 yards to the Lester Prairie 37. Two plays later, McCabe, who completed nine of 27 pass attempts for 127 yards, connected with Tyce Shook for 27 yards.

Blake McVenes ran for 6 yards, and Tommy Kennedy dove for a yard to the Lester Prairie 5. From there, McCabe, on the keeper, got ran out of bounds at the 1, but on the next play he hooked up with Shook in the end zone for the score.

With the McCabe PAT kick the Clippers were up 7-0 as the last second ticked off the first quarter.

But that would be it for Clipper scoring. The defense held for one more series before the Bulldogs pulled within a point, 7-6.

With the Bulldogs facing 4th and 6, the Clippers got flagged for encroachment. From there, they executed a 25-yard run to take the ball to the Clipper one. A play later, the Bulldogs scored on a run up the middle, but the Clippers maintained their lead when senior Brock Olson blocked the PAT kick.

After three incomplete passes and a Clipper punt, the Bulldogs scored on a 62-yard catch and run. With the PAT run, it was 14-7 with 1:55 left before the break.

“They through a formation at us we had never seen,” Atherton said. “They don’t have any film. We did a shift over and they scored a touchdown. It’s just those little things of having more formations on film to compare going from nine-man to 11-man, and that’s frustrating.”

Neither team scored after. Well into Lester Prairie real estate, the Clippers had a couple of chances in the second half, but could not manage to punch it in. The Bulldogs, 1-2 with the win, drained the clock in their final possession to hang on to the triumph.

“It felt like we lost the ability today to just throw and catch,” Atherton said. “I think sometimes when you get adrenalin flowing and you’re on the verge of trying to win, your pushing yourself too hard instead of just going out and relaxing and paying the game.”

Olson, who played with high intensity on his birthday, had 14 tackles but was nursing an injured hand as the final seconds ticked off the clock. McCabe and Carter Dylla each had six tackles Seely had seven tackles with one behind the line. Kennedy had nine tackles. Fischer Knish, back on the field after his scary injury last week, had four tackles with one a sack.

“As a team we did really well,” Atherton said. “We only gave up 14 points, so defensively I thought we did really, really well. Remember, one of our linebackers is a ninth grader (Tanyon Hoheisel), and our other backer is a 10th grader (Tommy Kennedy), so across the board we’re still learning. Tanyon is going from eighth-grade speed to varsity speed, and Tommy is too because he didn’t play much last year because he had a bad back.”

With no electricity, bare spots where it was widened and the hill in disarray because of construction, the Clipper field for any game this year seems to be a manner of opinion among Clipper staff. Next Friday, at least, the Clippers are back to Le Center to host 1-2 Janesville-Waldorf-Pemberton.

“We told them we have to finish 5-3,” Atherton said. “That’s what their mindset has to be, and our biggest enemy right now is ourselves. We have to clear our heads and get a football mentality.”