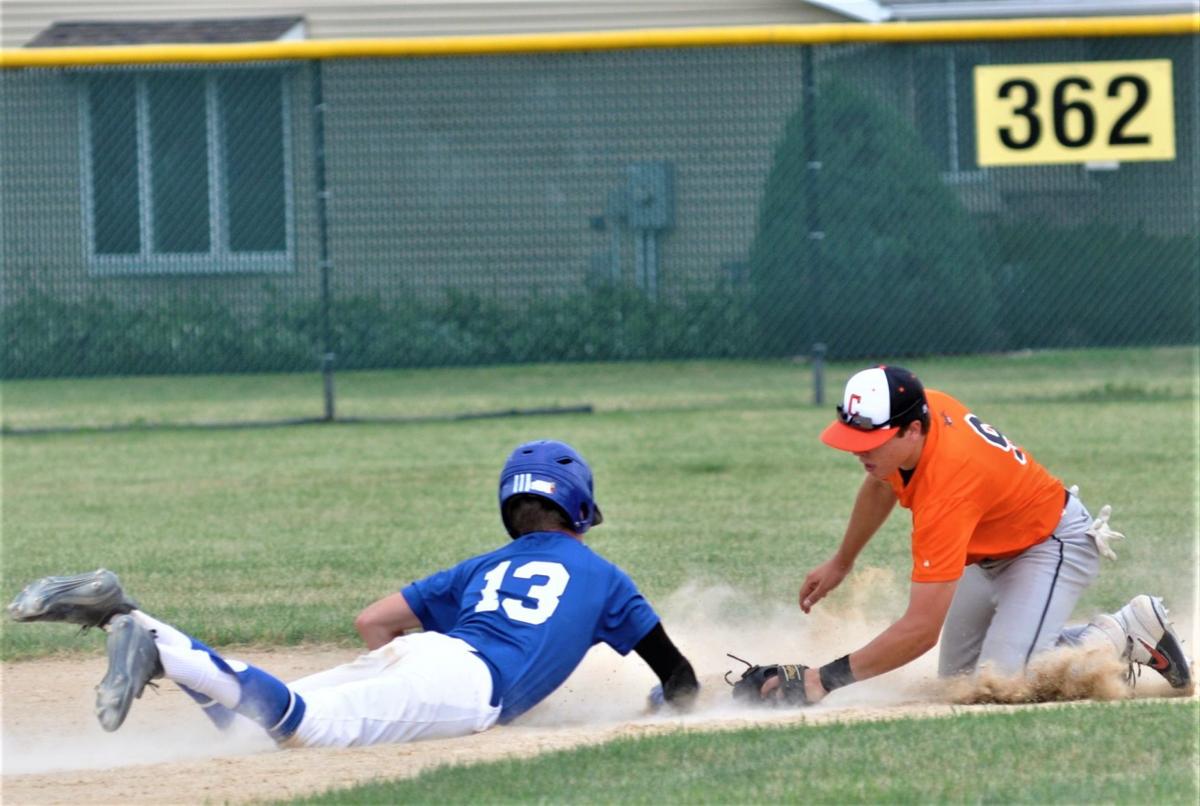 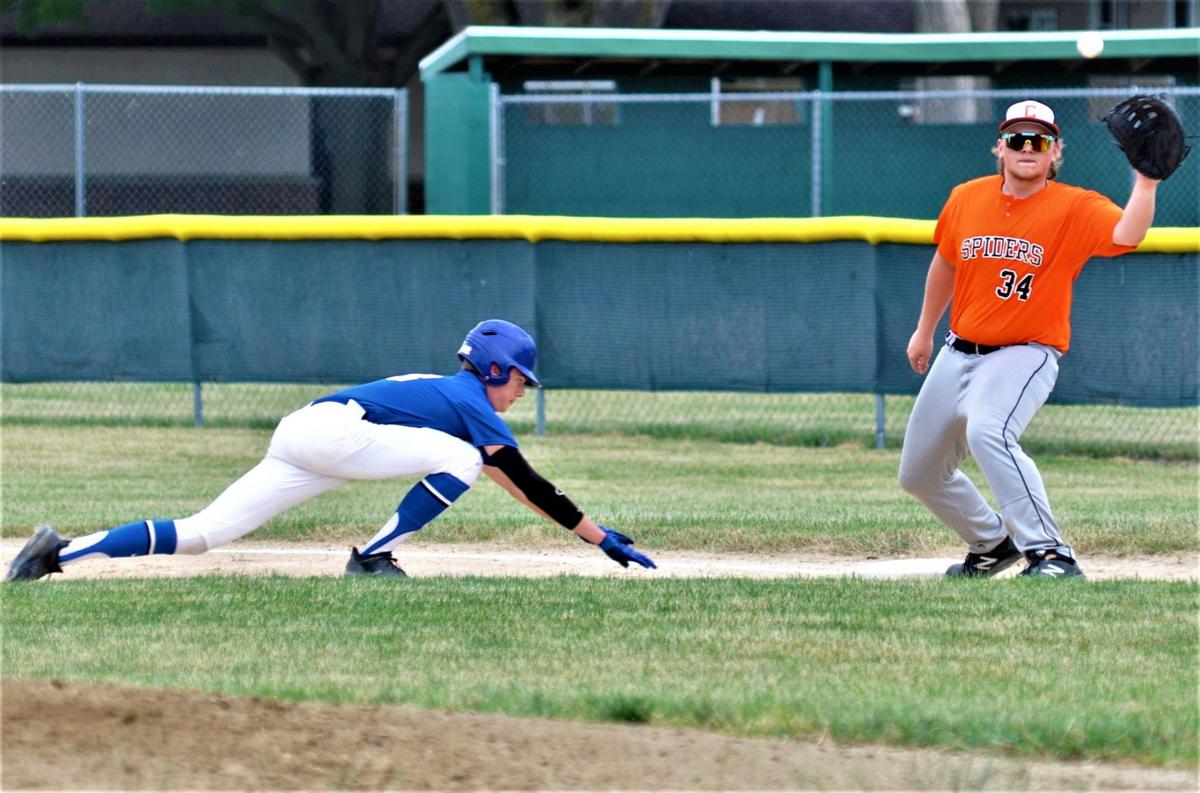 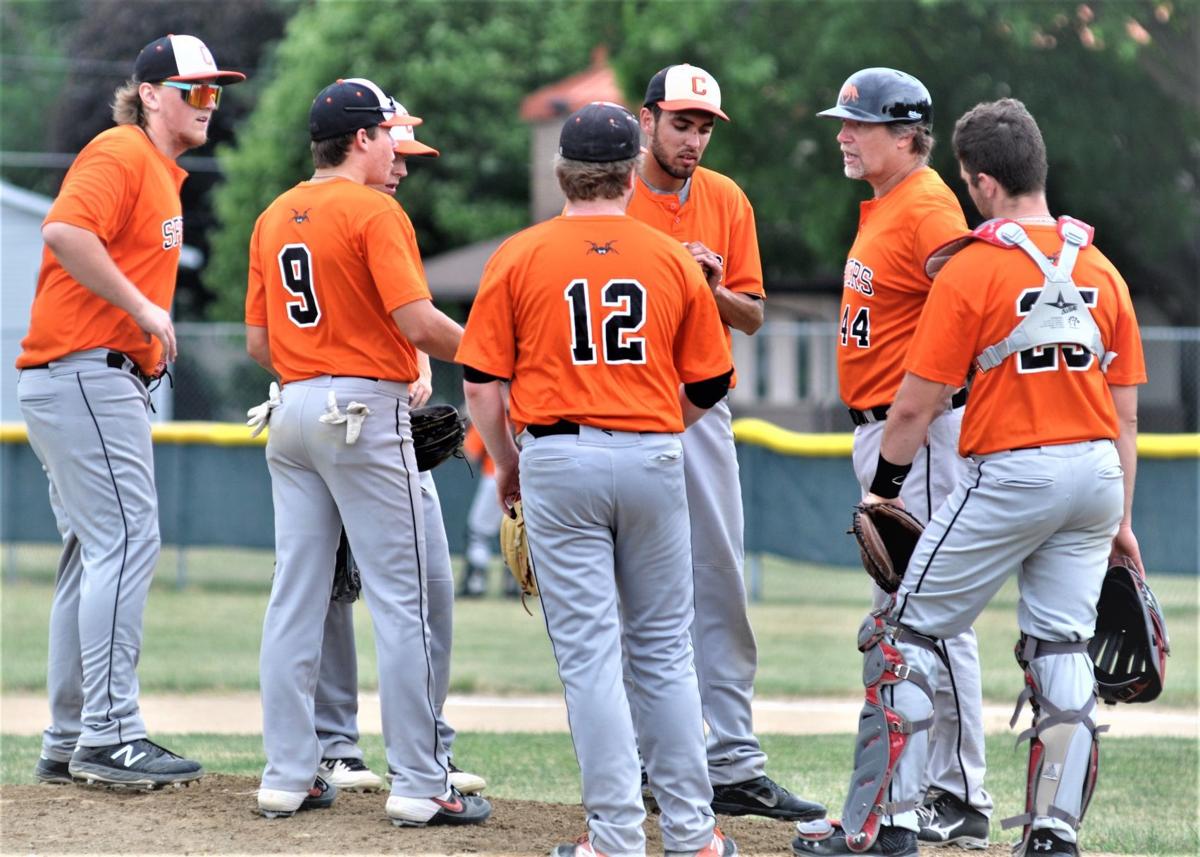 Cleveland Spiders manager Mike Krenik (second from right) has a conference with pitcher Arlen Nett and the infield when the lake Crystal Lakers load the bases in the fourth inning. (Pat Beck/St. Peter Herald)

Cleveland Spiders manager Mike Krenik (second from right) has a conference with pitcher Arlen Nett and the infield when the lake Crystal Lakers load the bases in the fourth inning. (Pat Beck/St. Peter Herald)

In this virus shortened amateur baseball season, the Cleveland Spiders and the Lake Crystal Lakers season opener Sunday afternoon at Cleveland turned out longer than normal.

It lasted 4½ hours because of an hour rain delay that flooded the infield. But the Spiders cleared the standing water with rakes and shovels, put down ag lime to soak up the wet spots and finished the game.

The Lakers scored a run in both the first and second innings to take a 2-0 lead. But Cleveland cut it to 2-1 with a run in the third inning. Shortstop Jerren Jobe led off with a walk. Right fielder Parker Baron singled to left. Starting pitcher Arlen Nett hit a sacrifice fly to advance Jobe to third, and Jobe scored on a balk.

The Lakers increased their lead to 6-1 with four runs in the fourth inning on four hits and two walks.

The Spiders then scored a run in the bottom of the fourth to cut the lead to 6-2. Left fielder Carter Dylla reached second on an error, and he went all the way around from second to home on a wild pitch. The catcher tagged him, but he dropped the ball.

Cleveland added another run in the fifth inning to cut the lead to 6-3. Nett reached on an infield hit down the middle. Third baseman Alec Rogers singled to center. Dylla singled to left to drive in Nett.

Then heavy rains hit at the start of the sixth inning and delayed the game for an hour.

Back on the field, Lake Crystal scored a run in the seventh to take a 7-3 lead and finished off the scoring with a run in the ninth.

Gabe Holland pitched the last two-thirds of an inning with one hit, a walk and two strikeouts.

Playing only 13-60 League games this summer, the Spiders have home games the next four Sundays: 5 p.m July 5 versus Waterville, 2 p.m. July 12 against Morristown, 2 p.m. July 19 versus Minnesota Lake and 2 p.m. July 26 against Wells.

The Spiders finish off the regular season in an away game against Janesville at 7:30 p.m. July 29 at Le Center's Ray Plut Field.