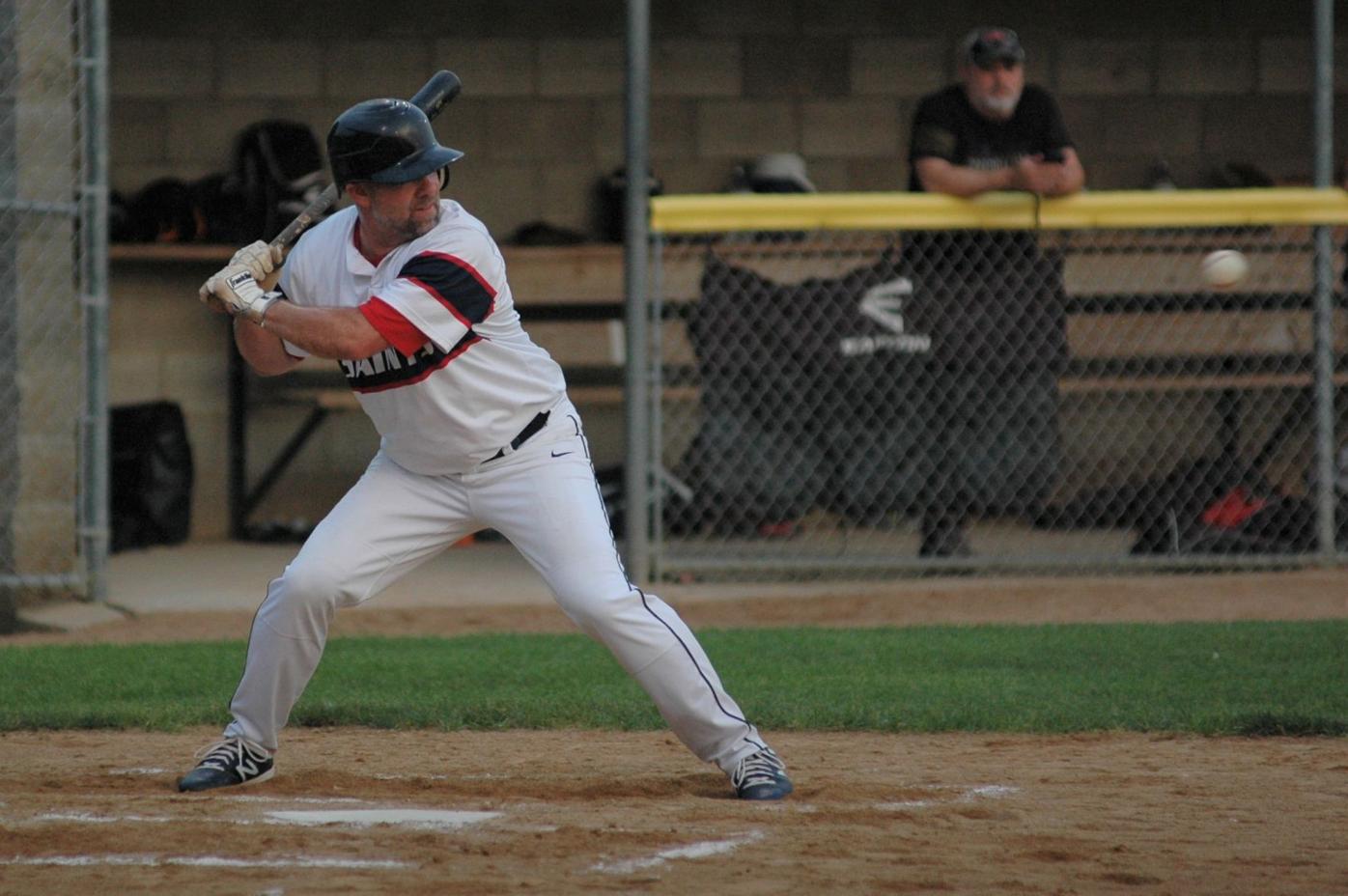 Jeff Baron looks in a pitch against the Braves. (Ben Camp/southernminn.com) 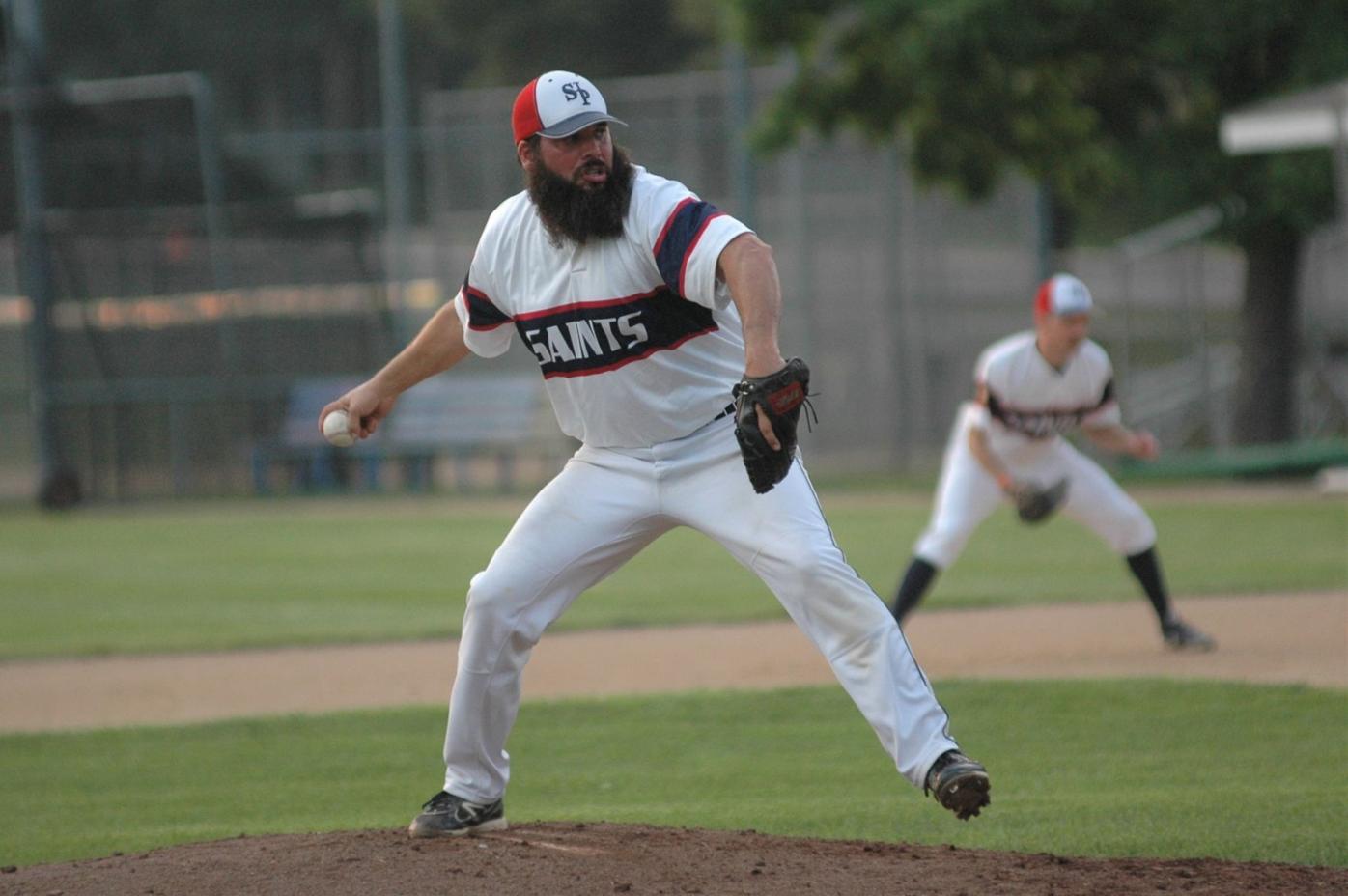 Saints starter Jeremy Nachreiner winds up a pitch in the top of the second inning. 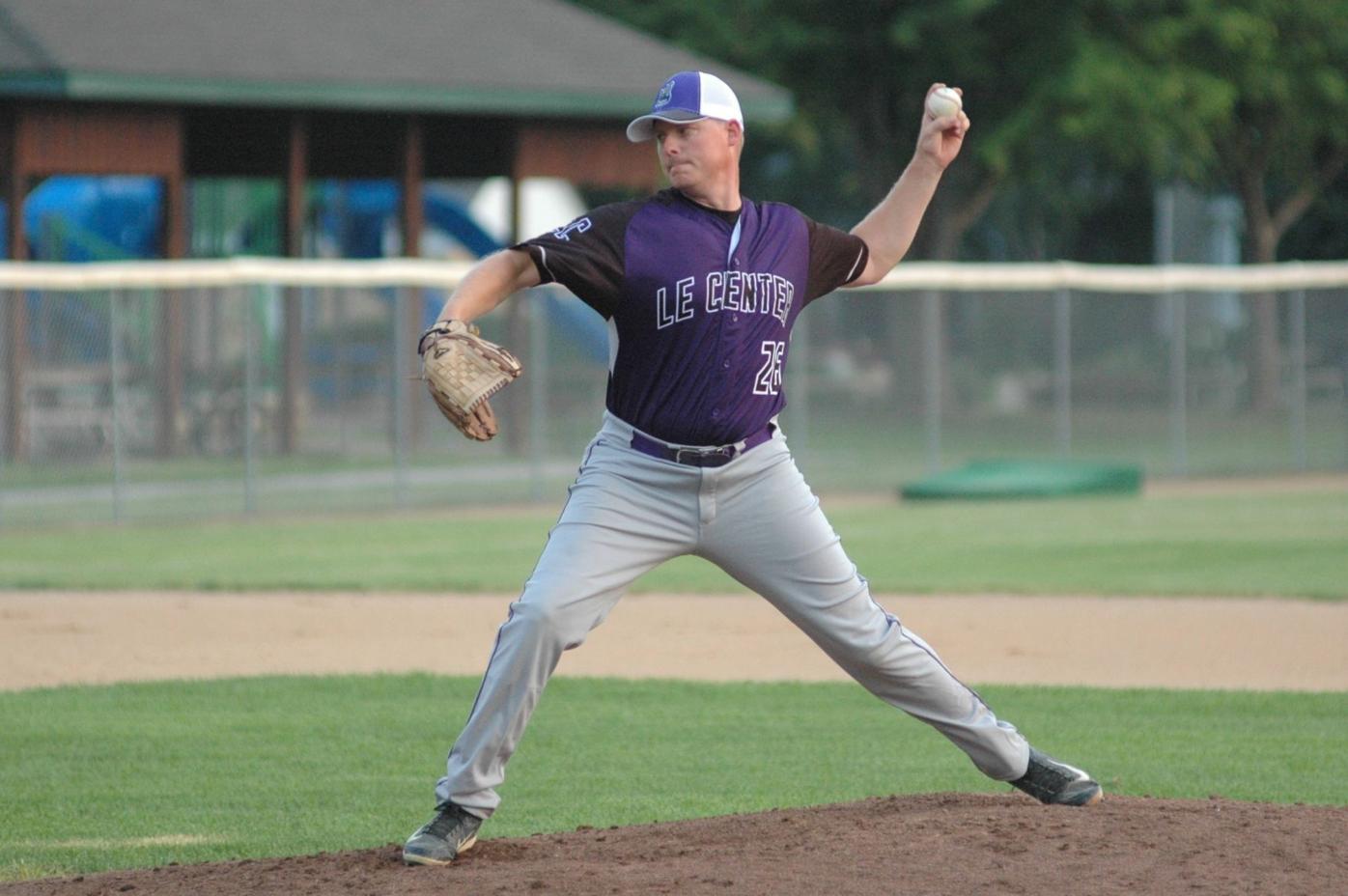 The Le Center Braves starting pitcher winds up against the Saints. (Ben Camp/southernminn.com) 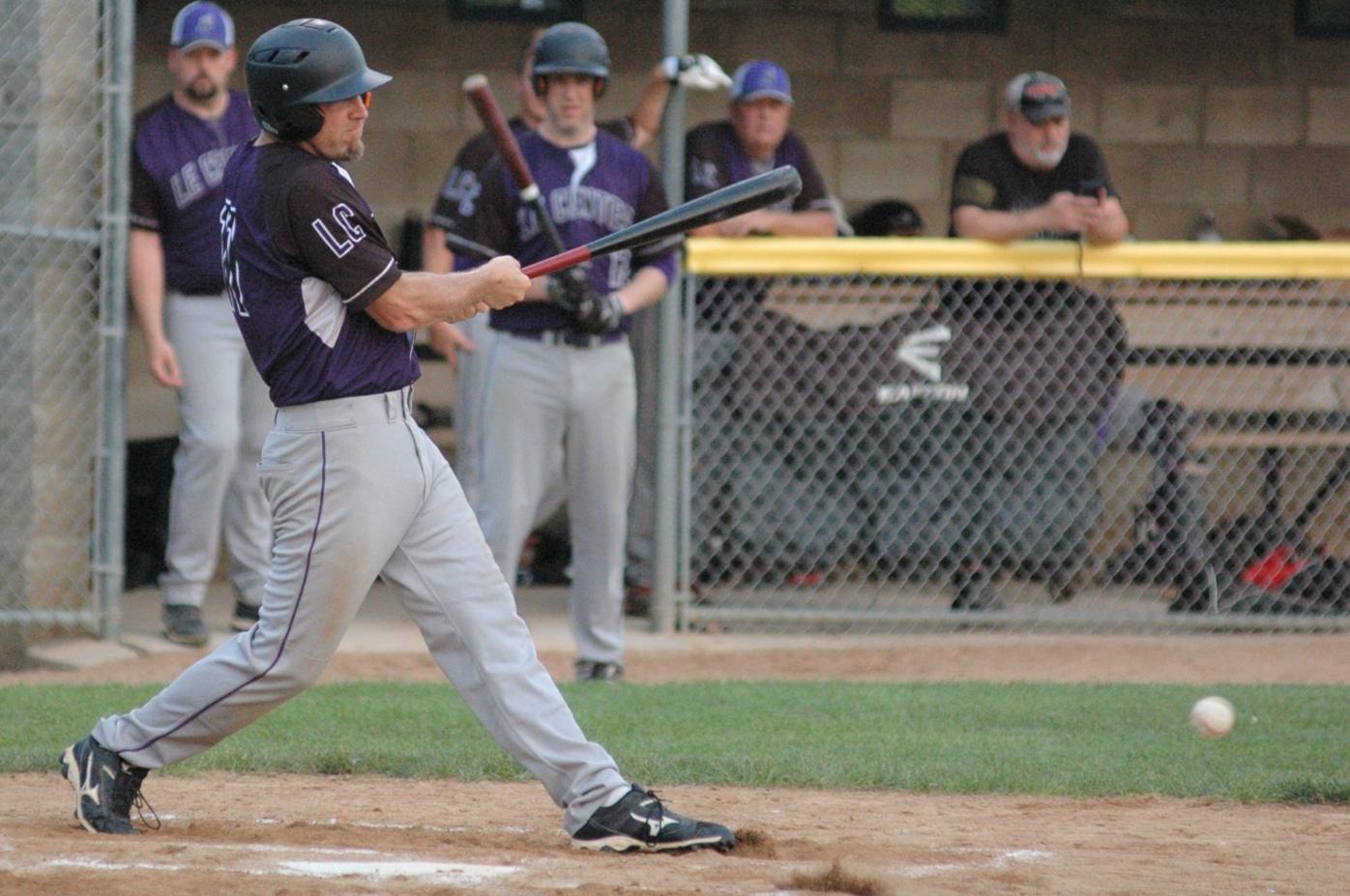 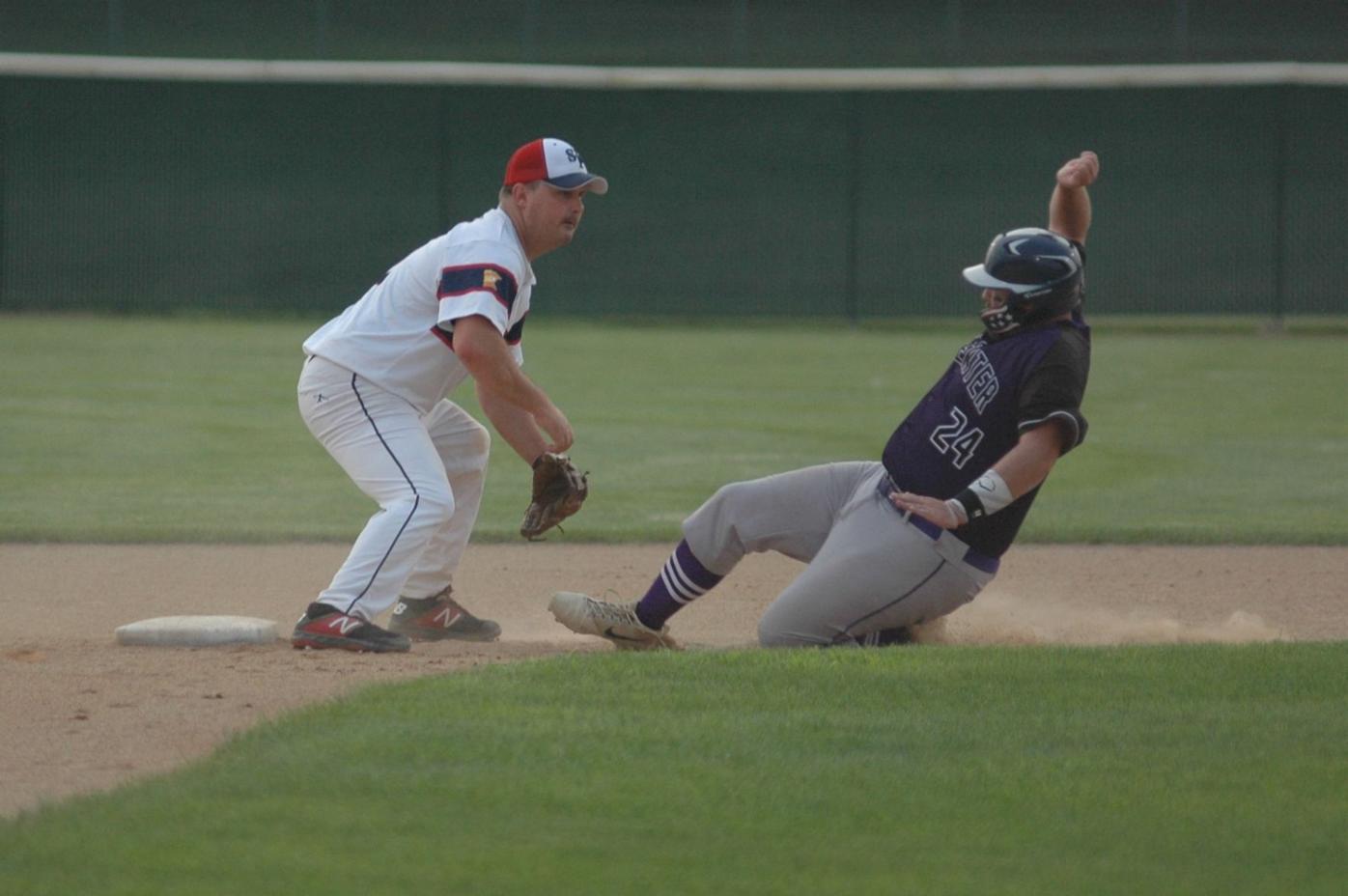 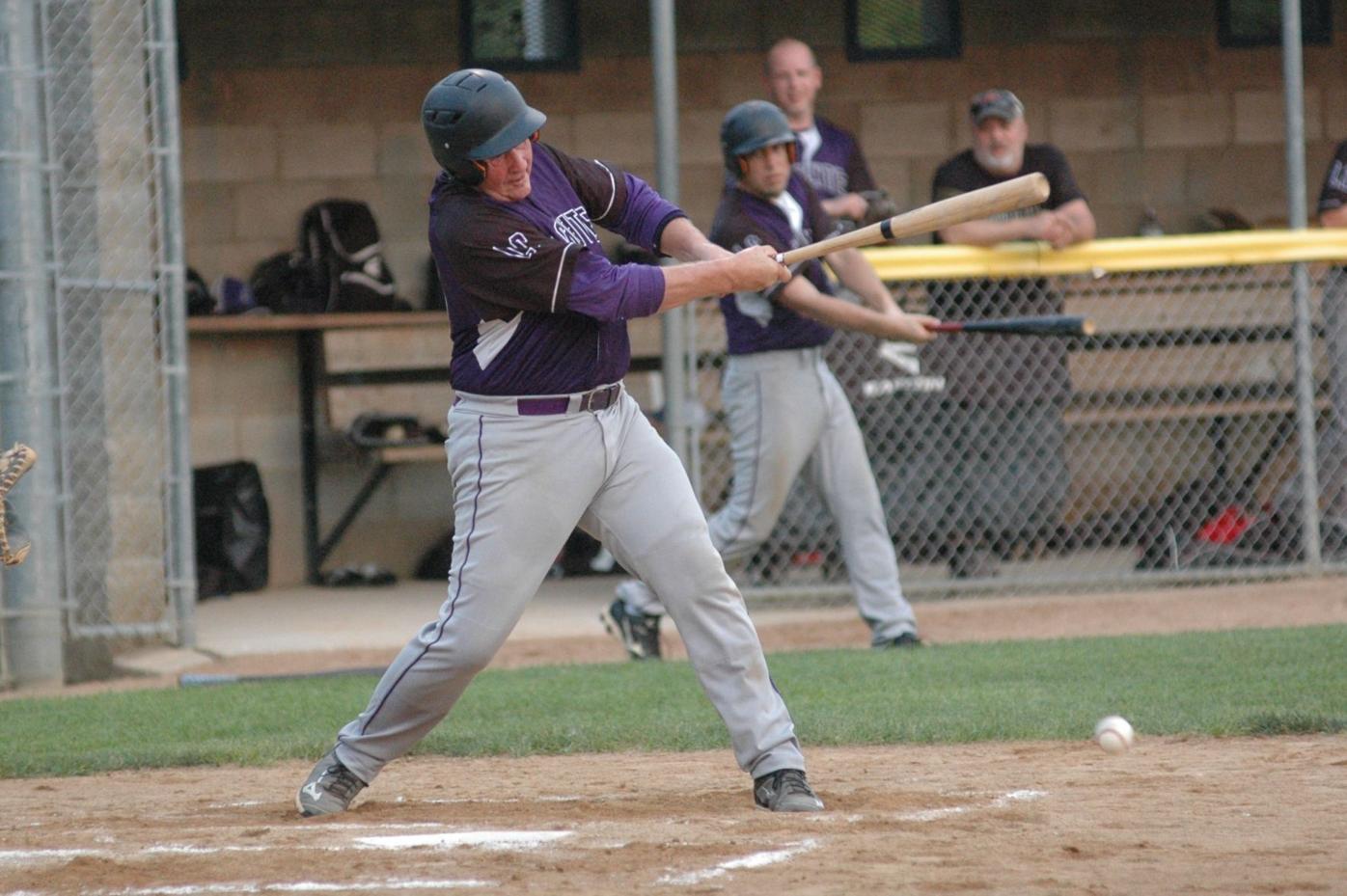 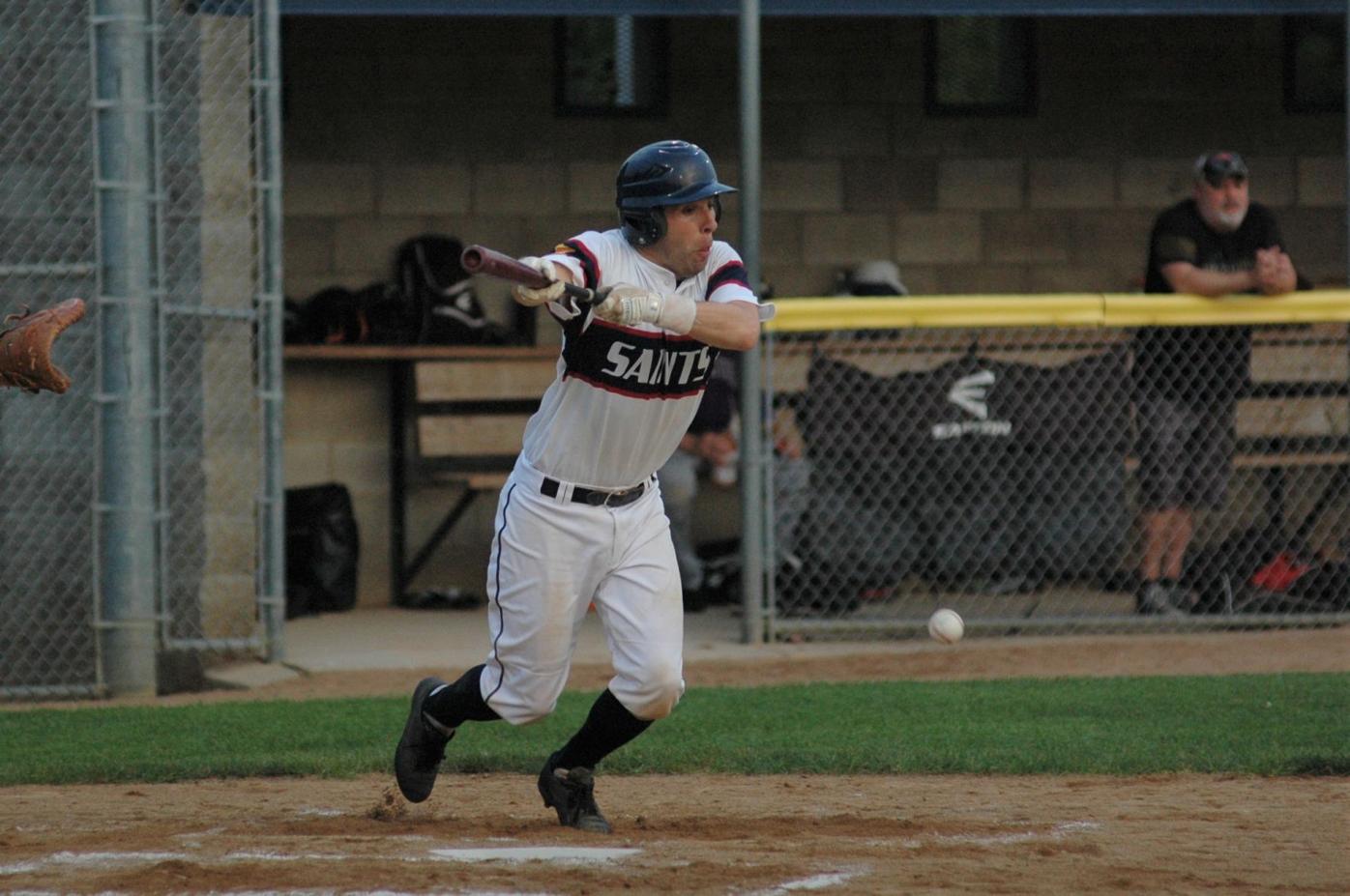 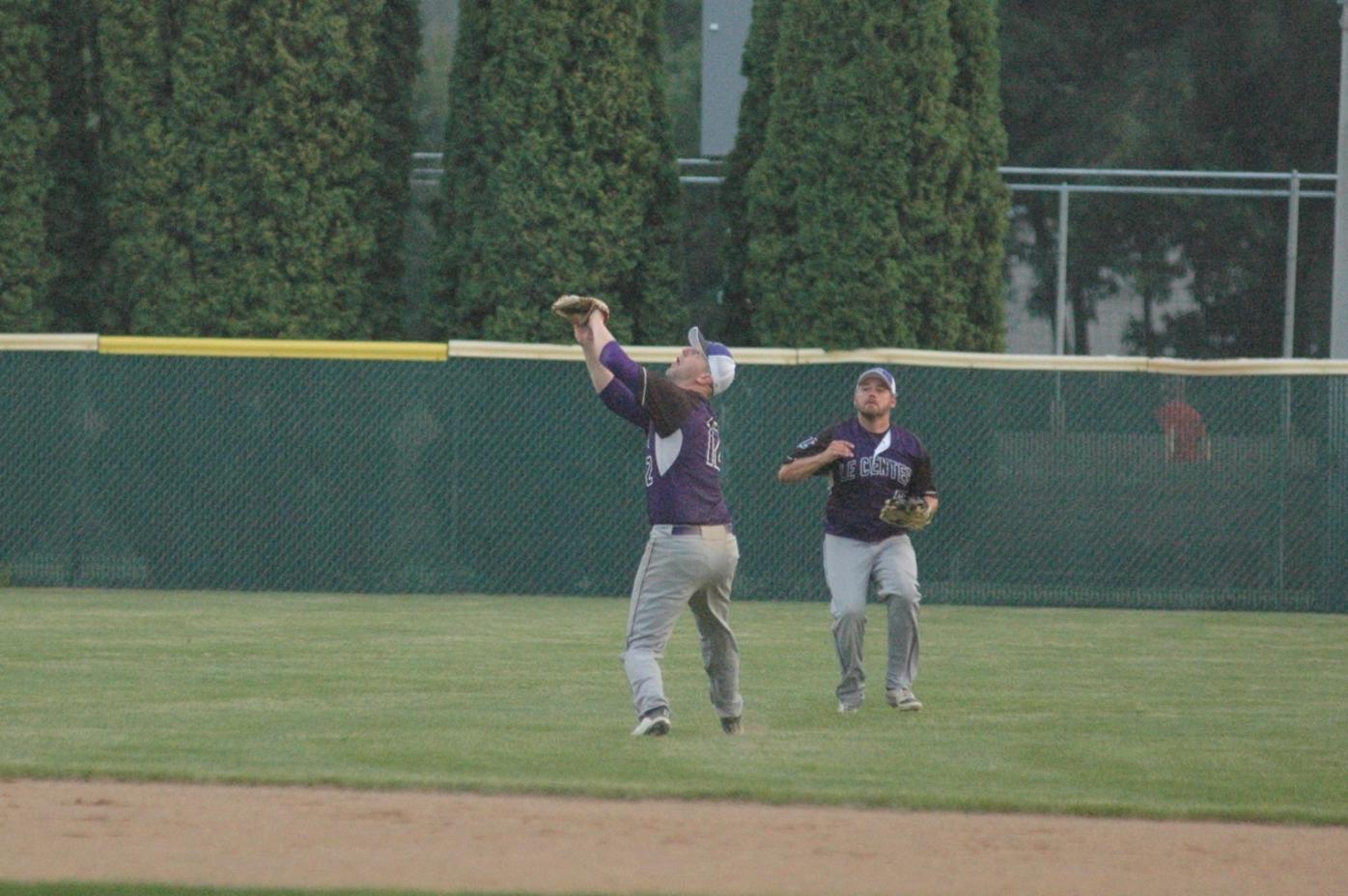 Braves defender Neal Radichel moves under a fly ball to earn the out. (Ben Camp/southernminn.com) 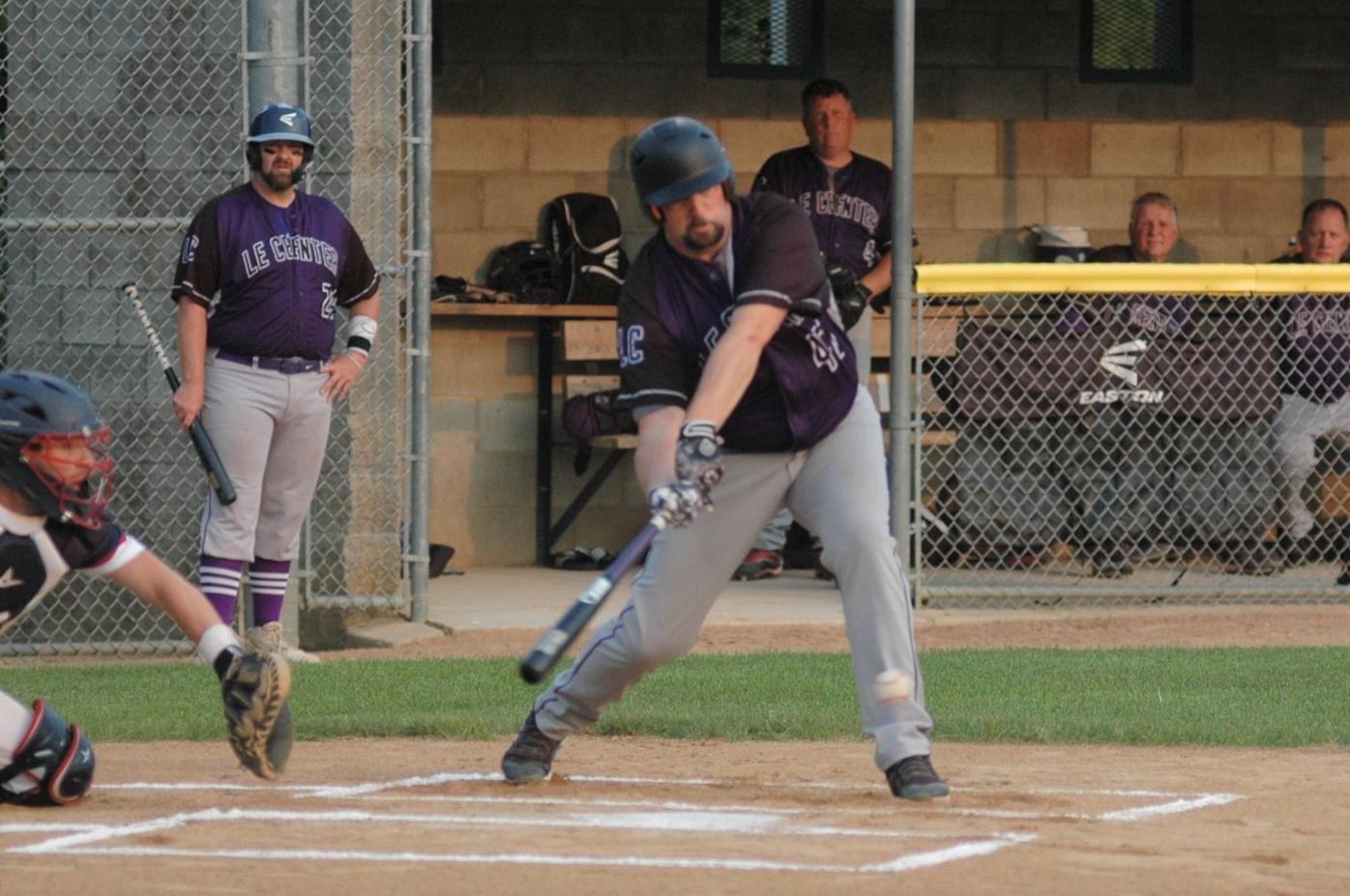 Braves hitter Tom Heilman reaches low in the zone to dig out a pitch. (Ben Camp/southernminn.com)

Defense was the name of the game, as a combined seven hits was all that could be mustered Tuesday night at Veterans Park. The St. Peter Saints Over-35 baseball team rode the active arm of starting pitcher Jeremy Nachreiner in a shutout 3-0 win over the Le Center Braves.

Le Center threated to score in the top of the first inning with a leadoff walk drawn by Neal Radichel, followed by a single to left field from Josh Fredrickson. St. Peter's defense, though, was able to get out of the danger when a swinging strikeout caused the batter to attempt to reach first and put the runner at third in no man's land where the Saints were able to apply the tag and get out of the inning.

"They were big," Nachreiner said of the defense, "I struggled a few times, and when I had to make pitches that put the ball in play, they made the plays."

The top of the second saw the Braves pick up their second hit of the night, as Landon Little pushed a single past the left side of the infield defense. Unfortunately for Le Center, that hit would be their last of the night as St. Peter's pitcher Nachreiner found his groove.

"We made great defensive plays, and the guys made my job look easy out there." Nachreiner said.

St. Peter opened the bottom of the second with a leadoff single from Kent Bass, followed by a walk drawn by Brandon Kerling and a single to load the bases from Luke Larson. Nachreiner capitalized on the bases loaded situation and helped his own case when he blooped a single between the first baseman and right fielder to score Bass and Kerling.

"It felt good; when we got the lead, we were able to play calm." Nachrainer said of the team's approach.

Ryan Wenner opened the bottom of the third with a hard hit single into left field and was advanced by Mike Nachreiner on a sacrifice bunt, but the Saints weren't able to add to their 2-0 lead in the inning after the Braves defense were able to force a pair of flyouts.

Le Center had another opportunity to score in the fourth inning when Radichel earned his second walk of the night before stealing second. Little was then able to make it to first on an error from the St. Peter defense, but Nachreiner was able to end the threat as he struck out a batter for the third out to get out of the inning with no harm done.

The Braves made a pitching change from the starter to reliever Ken Schmidt in the bottom of the fourth. The Saints were able to tag Schmidt when Steve Winkler found the hole in the right field defense and was able to hustle into second safely. Winkler was then brought home by Joey Schnoor on an RBI single that found the gap in right centerfield.

St. Peter saw another scoring opportunity in the fifth inning, as Wenner was hit by a pitch and followed that up by stealing second. The Le Center defense came up big when a popup knuckled weirdly in the infield before second baseman Paul Gohlke made the out while falling toward first base.

The Braves weren't able to mount a rally late, as Wenner made a pair of well played outs from the shortstop position to help close out the game and maintain the shutout.

"I got a lot more confident as the game went on, and with my brother behind the plate, I felt good." he said.

The win improves the Saints record to 7-2 on the season, while the loss drops the Braves to 1-9.