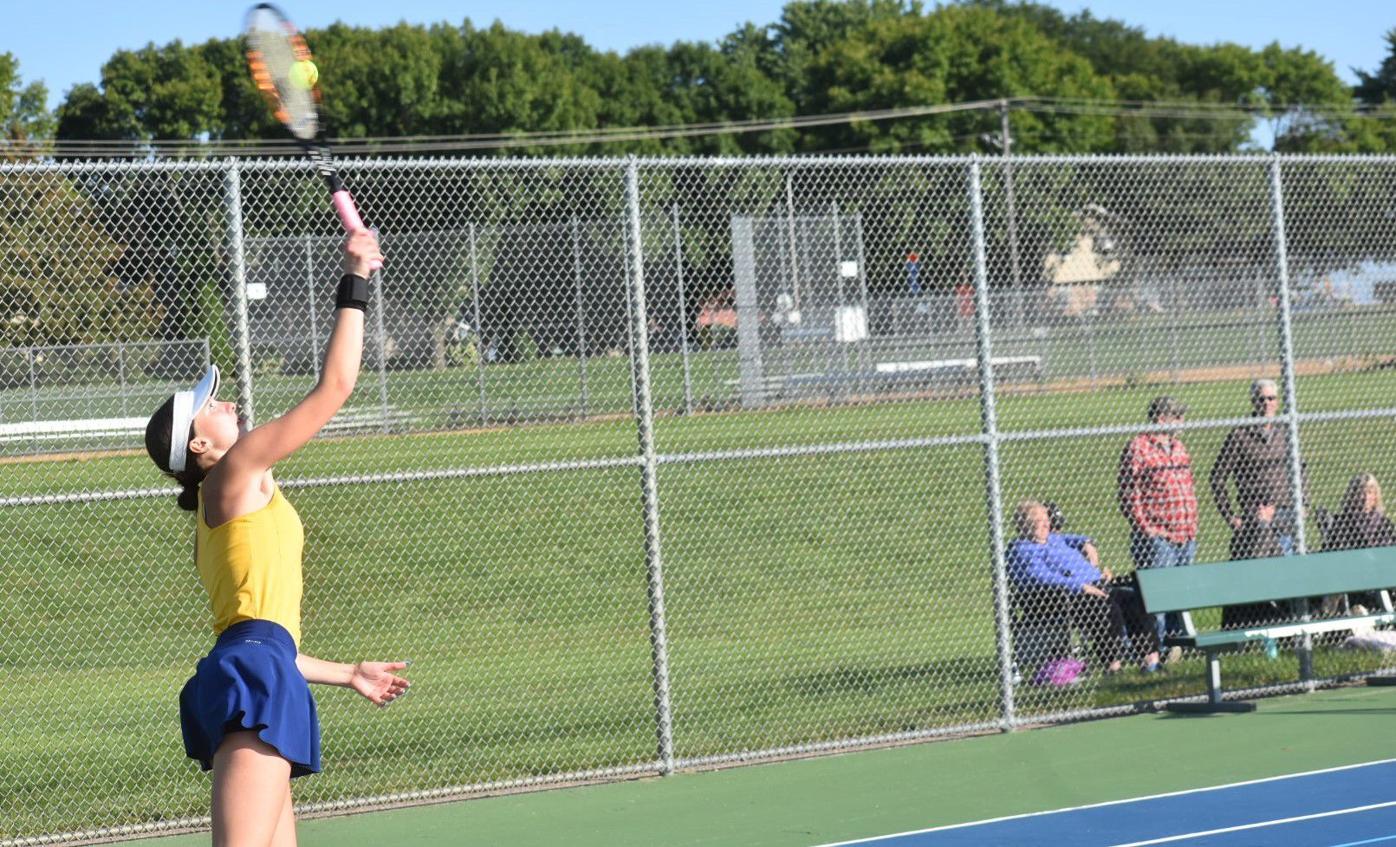 Giants No. 3 singles player Morgan Jones serves during her match against TCU. Jones is undefeated on the season. (Philip Weyhe/southernminn.com) 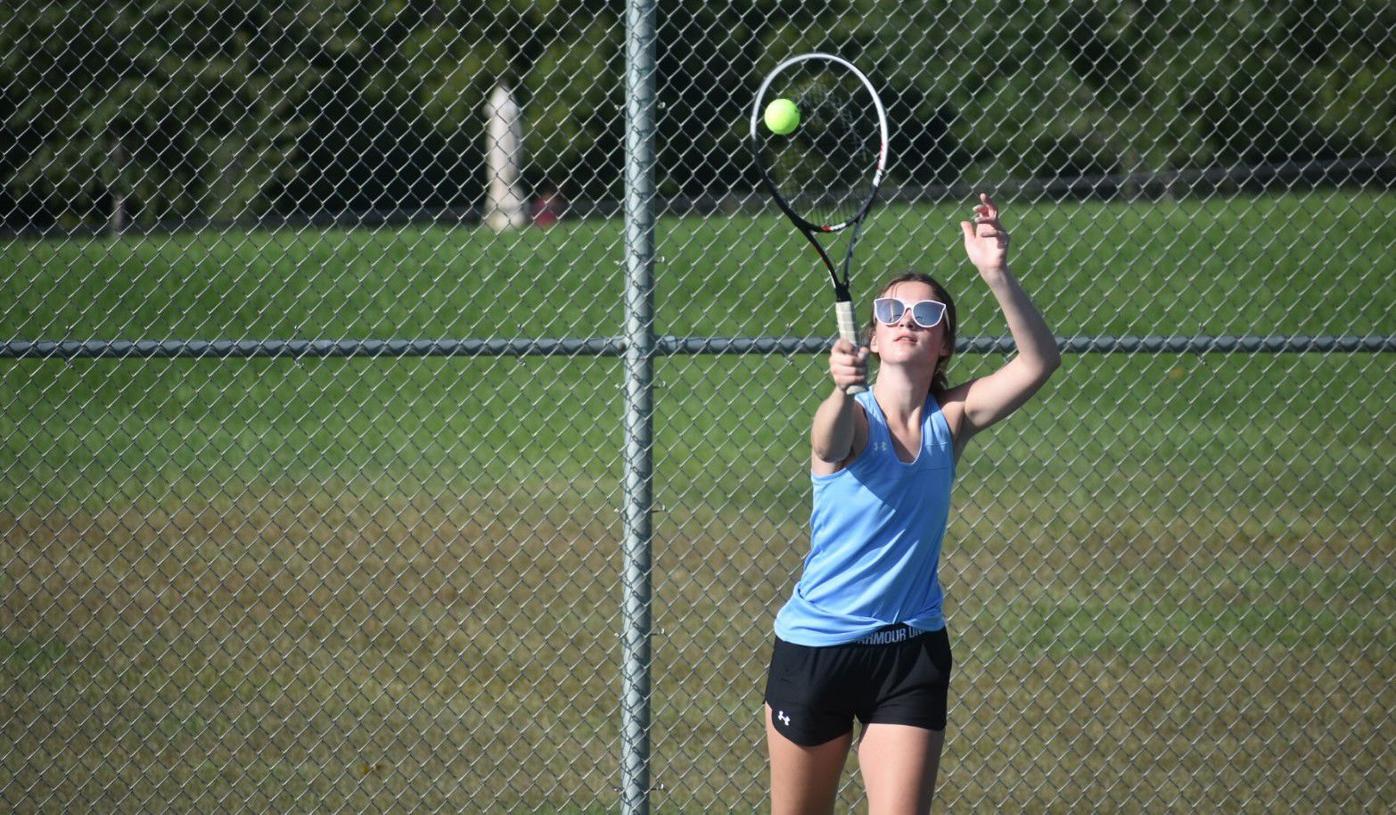 Tri-City United No. 2 doubles player Emma Traenor puts in a serve during her match against LS-H. 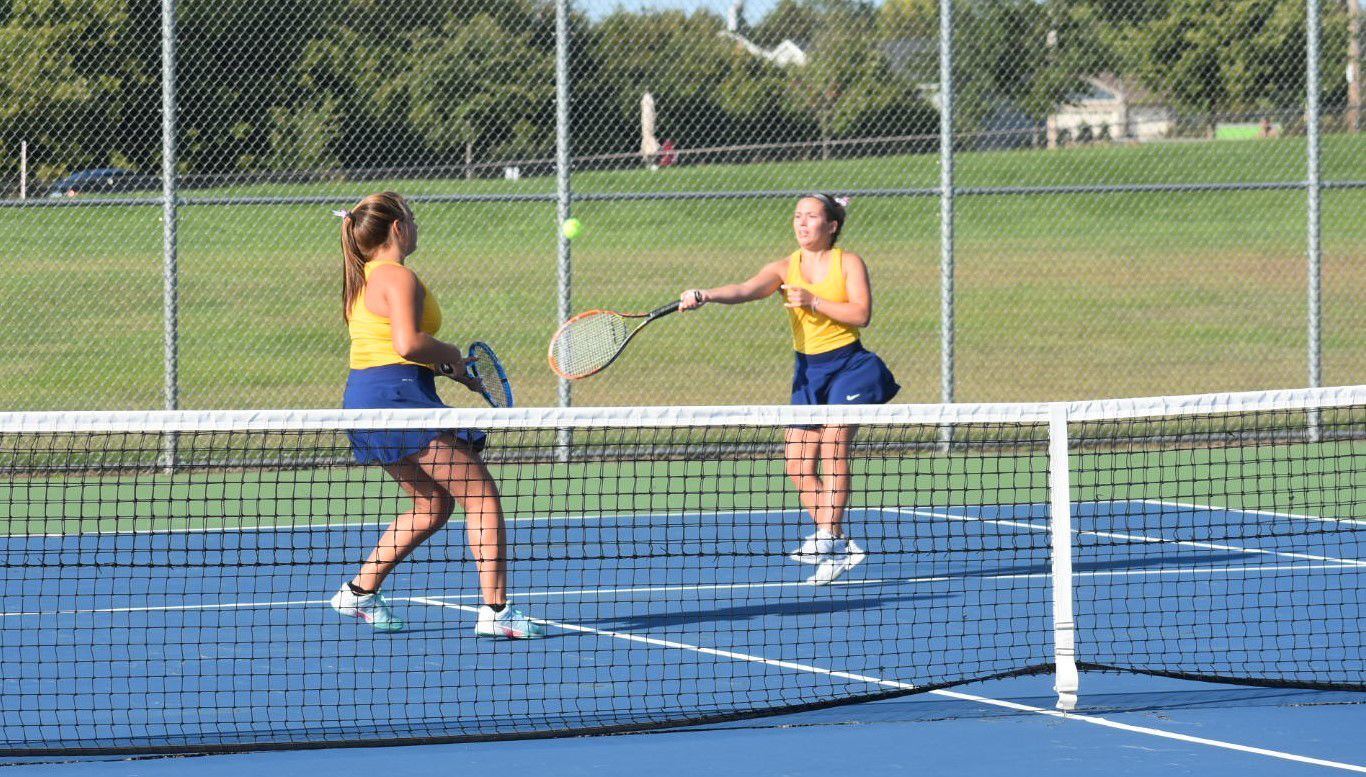 The No. 1 doubles team of Anna Pavlo and Mia Schwarz fended off competition from TCU and pulled away for a win. (Philip Weyhe/southernminn.com) 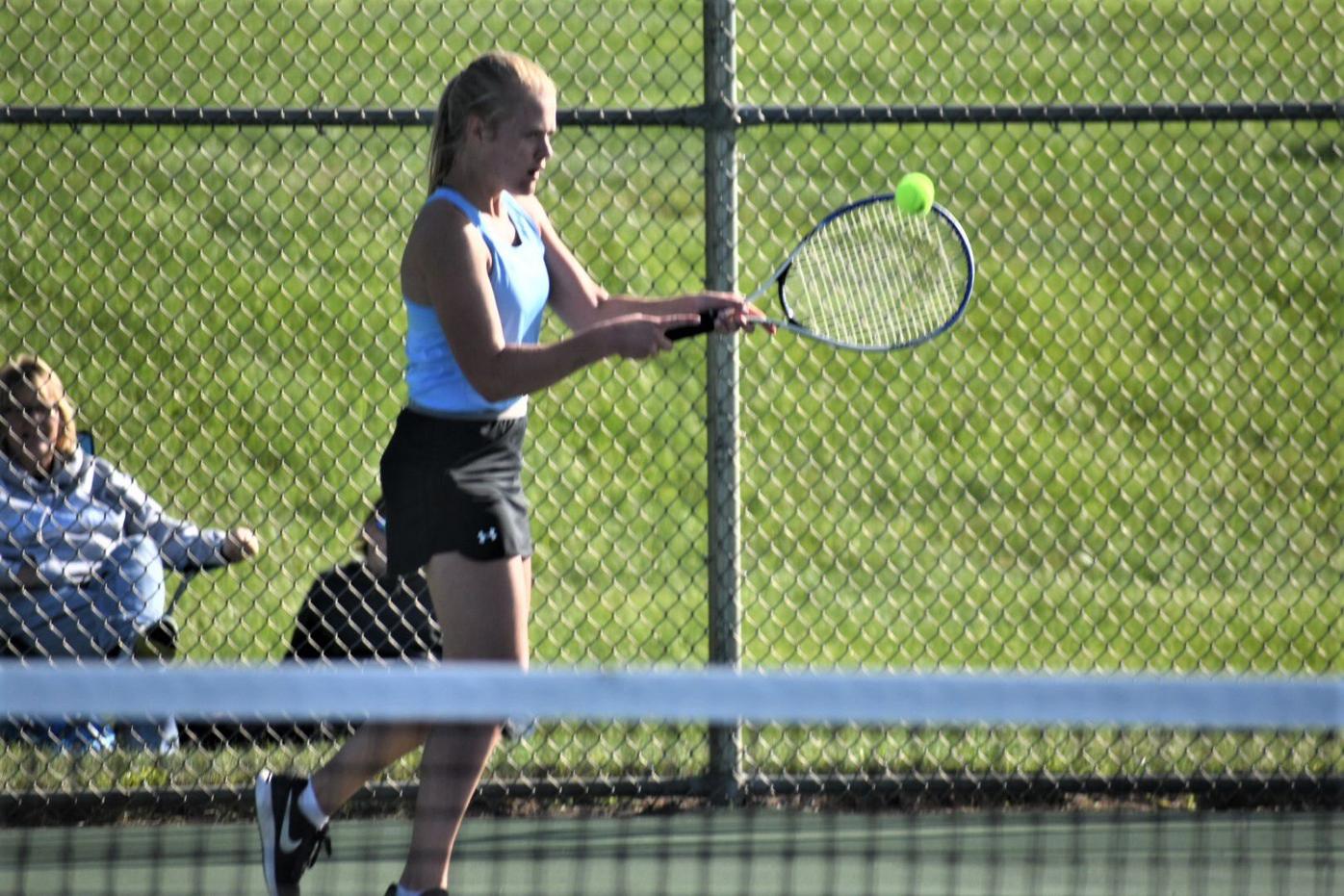 Sami Tiede gave her Giants competition a run for her money at No. 4 singles. (Philip Weyhe photos/southernminn.com)

Giants No. 3 singles player Morgan Jones serves during her match against TCU. Jones is undefeated on the season. (Philip Weyhe/southernminn.com)

Tri-City United No. 2 doubles player Emma Traenor puts in a serve during her match against LS-H.

The No. 1 doubles team of Anna Pavlo and Mia Schwarz fended off competition from TCU and pulled away for a win. (Philip Weyhe/southernminn.com)

Sami Tiede gave her Giants competition a run for her money at No. 4 singles. (Philip Weyhe photos/southernminn.com)

The Le Sueur-Henderson Giants girls tennis team keeps rolling, as it picked up two more home meet wins to remain undefeated on the season. The Tri-City United/Cleveland girls team has had a different story to its season thus far, but the team continues to improve.

In a matchup between the two squads Sept. 10, LS-H won 6-1, with the Titans only match win coming at No. 3 doubles. It was a good night for tennis, with temperatures in the mid-60s and little wind, and many of the Giants players hit the courts running.

At No. 1, 2 and 3 singles respectively, Greta Nesbit, Chloe Brandt and Morgan Jones each won in straight sets, giving up a total of four games between the three matches. Nesbit won 6-0, 6-0 over Josie Plut, of TCU; Brandt won 6-1, 6-2 over Titan Monserrat Ruiz; and Jones defeated TCU’s Morgan Mueller 6-0, 6-1.

Nesbit and Jones are both undefeated on the year. Nesbit, a senior, reached state as an individual last year. Jones, a junior, is playing her first full year in a singles spot. She was happy with her match against TCU.

“I hit the corners well,” said Jones, noting it’s something she’s been working on with coach Seaver.

She said it feels “really good” to be undefeated as an individual so far in the season, and regarding the team’s undefeated status, she said, “We’ve all been working hard, trying to do our best. I think we can go pretty far, if we have a postseason.” (There is still no determination as to whether Minnesota high school girls tennis section and state playoffs will take place in 2020.)

At No. 4 singles, TCU’s Sami Tiede pushed Makenna Reinhardt hard in two sets, but the Giants senior came out on top with a 7-6, 6-4 win.

“Sami was very competitive at No. 4 singles,” Titans coach Phil Murry said. “Pushing her to a tiebreaker in the first set.”

A couple of the doubles matches were also closely contested. At No. 1 doubles, Anna Pavlo and Mia Schwarz, of LS-H, were able to withstand the challenge of Gabby Prochaska and Rachel Rynda, winning 7-5, 6-2.

“No. 1 doubles started tentative but worked on better shot placement and net movement,” Seaver said of the LS-H duo. “Keeping the ball away from the net person.”

For the Giants No. 2 doubles team of Darbi Dunning and Halle Bemmels, it was somewhat smoother sailing with a 6-3, 6-0 victory over TCU’s Emma Traenor and MacKenzie Holmbo.

“No. 2 doubles took advantage of the other teams errors and played strong at the net,” Seaver said.

The No. 3 doubles match between LS-H’s Bella Holloway and Ella Nesbit and TCU’s Allie Schley and Savannah Squires was the only three-set match on the day, with the Titans duo coming out on top 6-3, 4-6, 6-3.

“I was really pleased with No. 3 doubles,” TCU’s Murry said. “Allie and Savannah really seamed to be in sync today. I thought they played very well together.”

Two days before the TCU meet, the Giants faced off against Sibley East on a much less enjoyable day for tennis, amid some cold and windy conditions. Coach Seaver said she knew it would be a test, as Sibley East had beaten Belle Plaine in similar fashion to what the Giants did.

“The girls were ready; they are working hard every day at practice to keep improving,” Seaver said.

Greta Nesbit kept her strong season going with a 6-3, 6-2 win over a competitive opponent at No. 1 singles.

“Greta faced a tough opponent with Jac Wibstad,” Seaver said. “She is a strong player, but Greta’s consistency, ability to move the ball around the court and well placed shots proved too much for the Sibley East No. 1 player.”

“Chloe found herself facing a much different style player than she has faced,” Seaver said. “The Sibley East senior uses a lot of lobs and patience. Chloe played her very closely and was able to push the match to three sets.”

“Morgan continues to show her strong tennis skills by winning another match,” Seaver said. “Morgan has a strong overall game with a powerful serve, the ability to move the ball on the court, and close at the net.”

Of Reinhardt, Seaver said, “She did an excellent job. She did not allow her opponent a single game. Her strength today was moving the ball on the court.”

“They did an excellent job using placement with their volleys and ground strokes to force their opponents to make errors,” Seaver said. “Anna and Mia were consistent and moved well together.”

“Darbi and Halle were strong at the No. 2 doubles position,” Seaver said. “They did an excellent job of working together and communicating to cover the court. Their consistency was a big factor in winning this match and allowing only three games by their opponents.”

Regarding the No. 3 doubles pairing, Seaver said, “Ella and Bella continue to play well together. Ella is a dominant force at the net, and Bella does a great job of seeing the openings on the court and placing her ground strokes out of the reach of her opponents.”