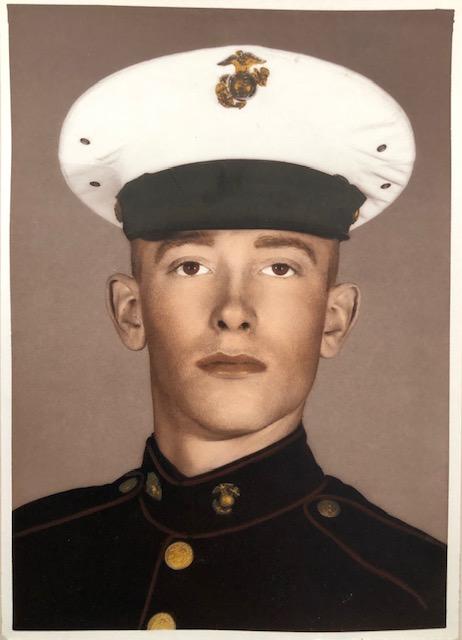 ARLIN EHLENFELDT 1943–2021 LE SUEUR—Bud Ehlenfeldt Beloved Husband, Father, Grandfather and Friend Semper Fidelis Arlin (Bud) Ehlenfeldt, a Vietnam Veteran who was exposed to Agent Orange, died January 2, 2021 at his home in LeSueur from Cancer and other complications associated with his service to Our Country. He was born in Oakland California in 9/17/1943 and his family relocated to the St. Charles Minnesota area in 1946 when he was 3. After attending school in St. Charles Bud being the Patriot that he was enlisted in the Marine Corps in 1963. He completed basic training in San Diego California. He served aboard the USS Yorktown before being deployed to Vietnam in 1966 and was Honorably discharged from the active Marine Corps in 1967. He met and married Mollie Krahn in 1968. They lived in several different towns in southern Minnesota before settling in St. Peter where they raised their 2 sons TJ and Blair. St. Peter is also where he worked for ADC and Onan as a tool maker. He finished his career with HTI where he worked both in Hutchinson and Plymouth while living in Le Sueur where he was active in the American Legion and VFW. Bud enjoyed hanging out and helping/watching family and friends do odd jobs during his retirement. Especially any odd job that required him to go to the lake. Bud is survived by his Wife Mollie (Krahn), his two sons TJ (Callie) and Blair (Sara) his 4 grandchildren Dale, Katie, Braddock and Brighton and his Good Friends Rich and Colleen Ryan. He was preceded in death by his Parents Neil and Elaine Ehlenfeldt his three brothers Vernon, Larry and Noel and his Favorite Sister Roxanna. A Memorial will be held on 5/15/2021 at his residence in Le Sueur. Koldenfuneralservices.com