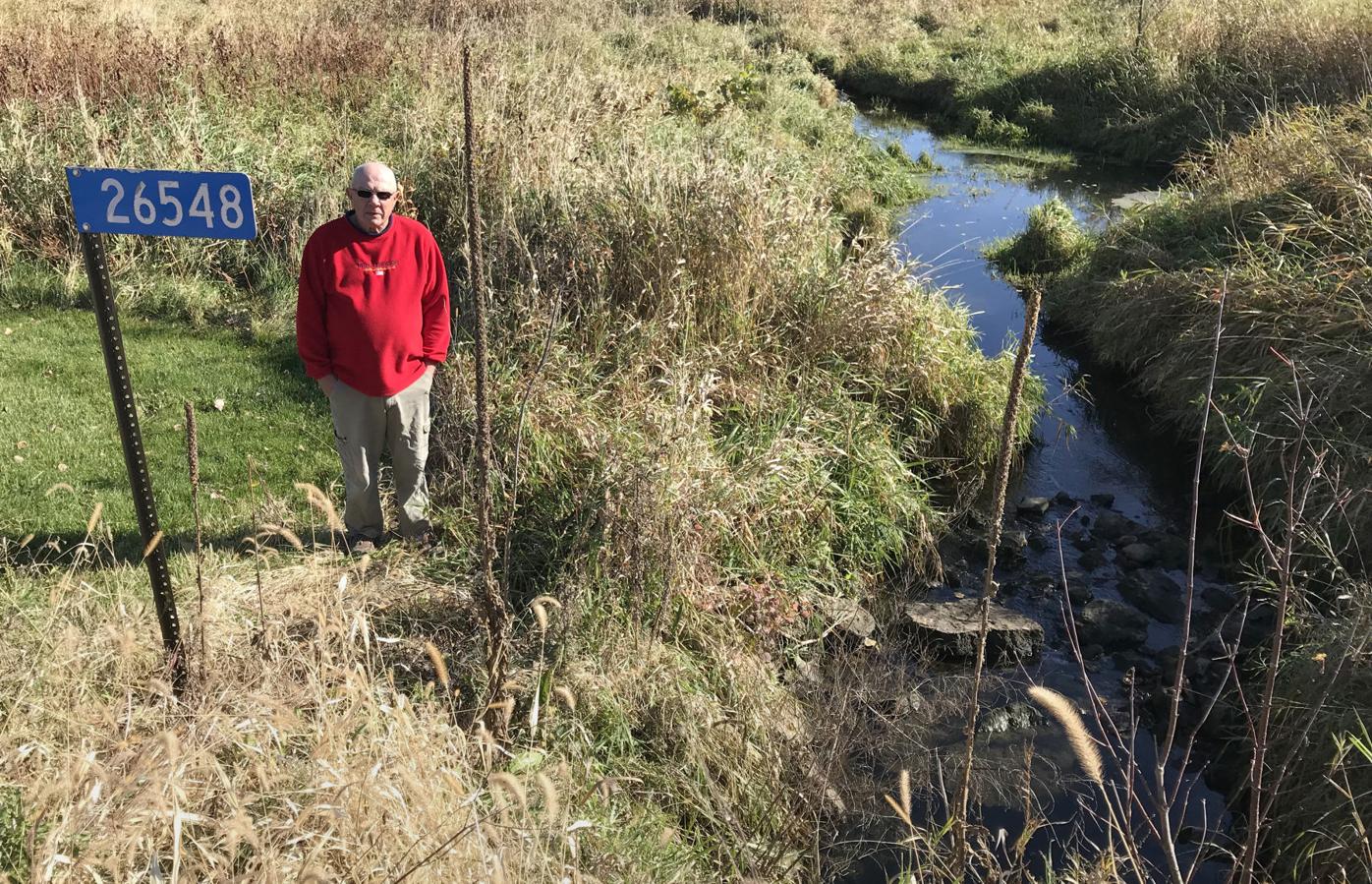 Years ago, the wetland on the corner of Leo Koppelman’s Cleveland Township farm site was a meadow. Here, he stands at the site of a 2.5-acre wetland restoration before work began. The Le Sueur County SWCD project, which finished in summer 2020 and draws from a BWSR Clean Water Fund grant, directs water from neighbors’ upland fields through the wetland. The water is now treated before it enters Middle Jefferson Lake. (Photo by Ann Wessel, BWSR) 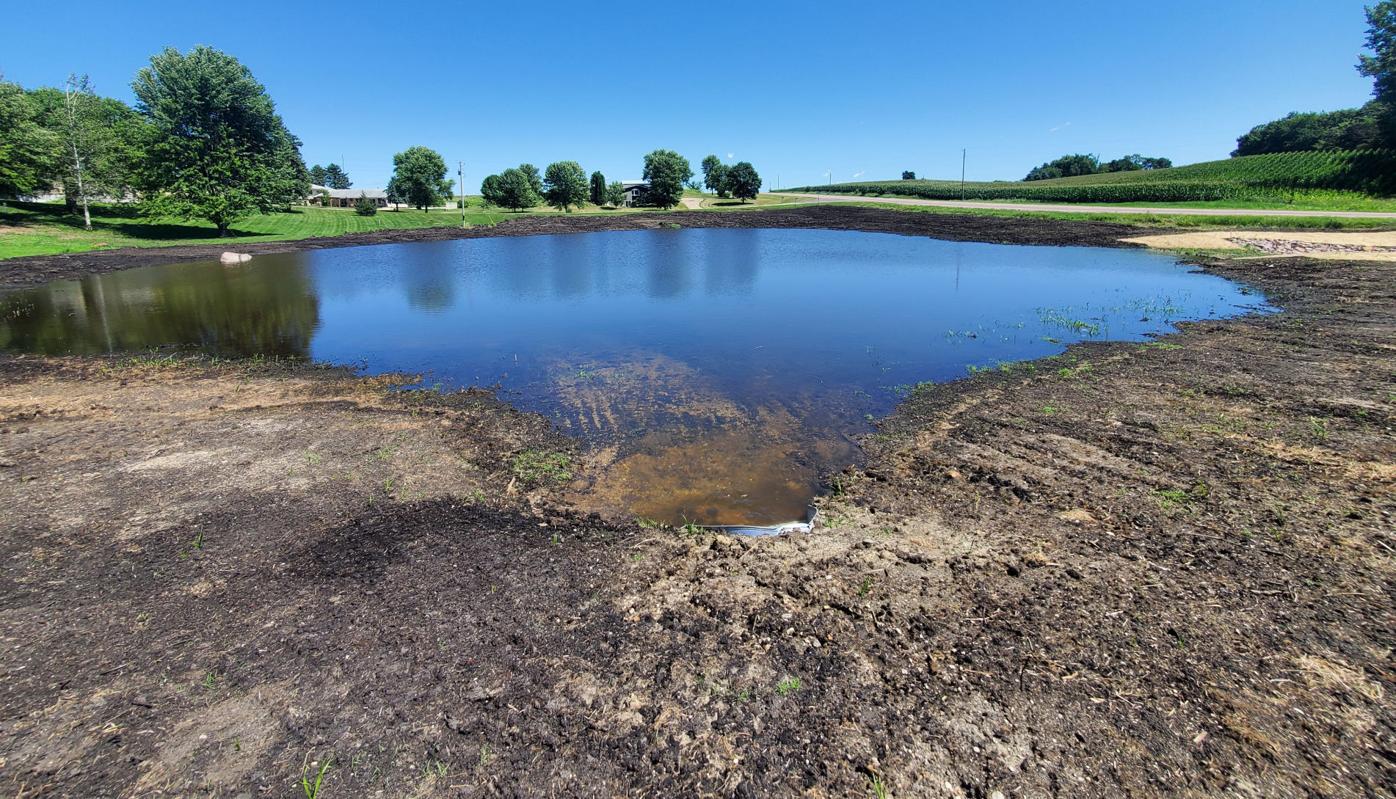 Contractors in summer 2020 excavated more of the Koppelman hog farm wetland to increase flood storage and installed a new culvert connecting it to the upper watershed. (Photo courtesy of Le Sueur County SWCD) 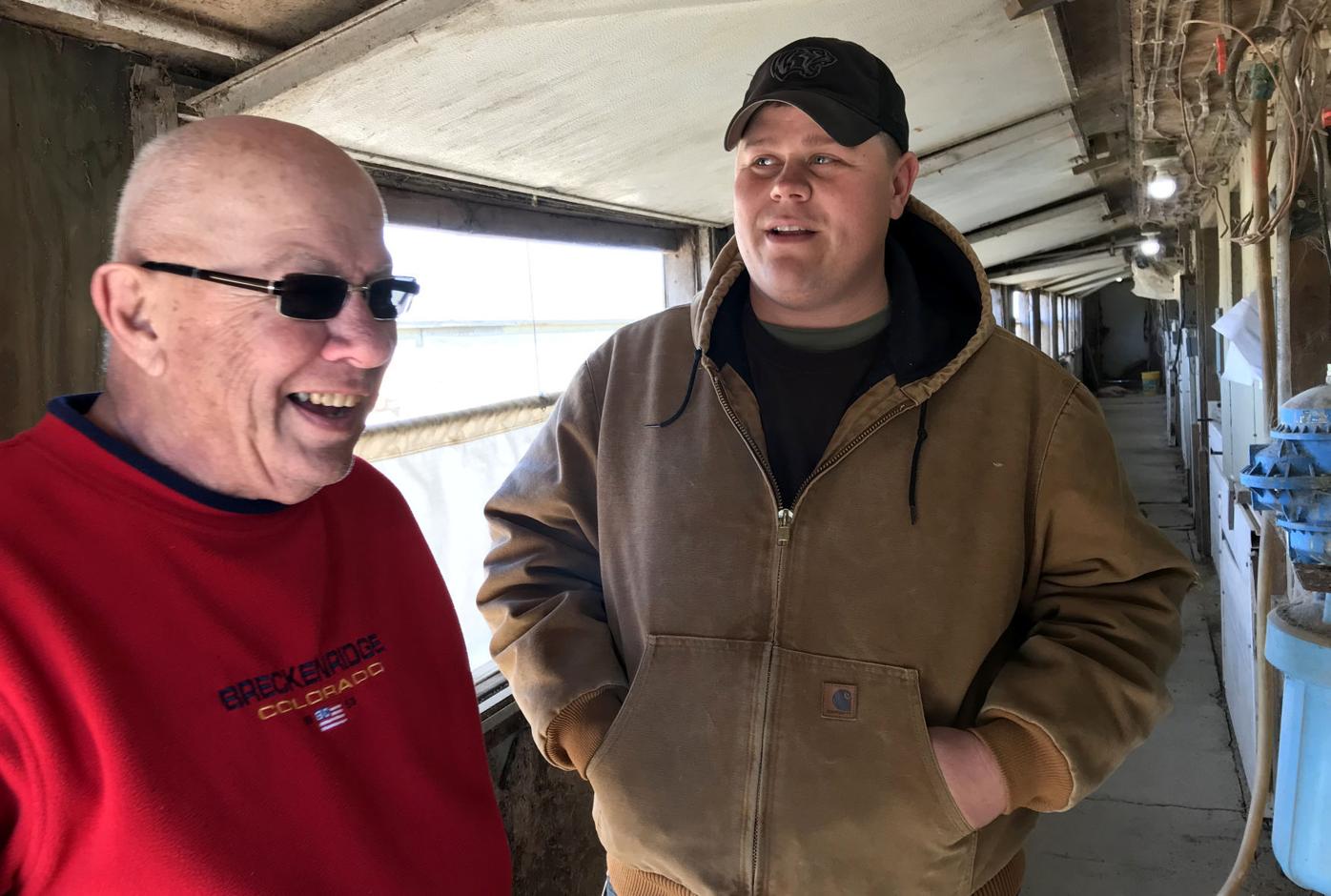 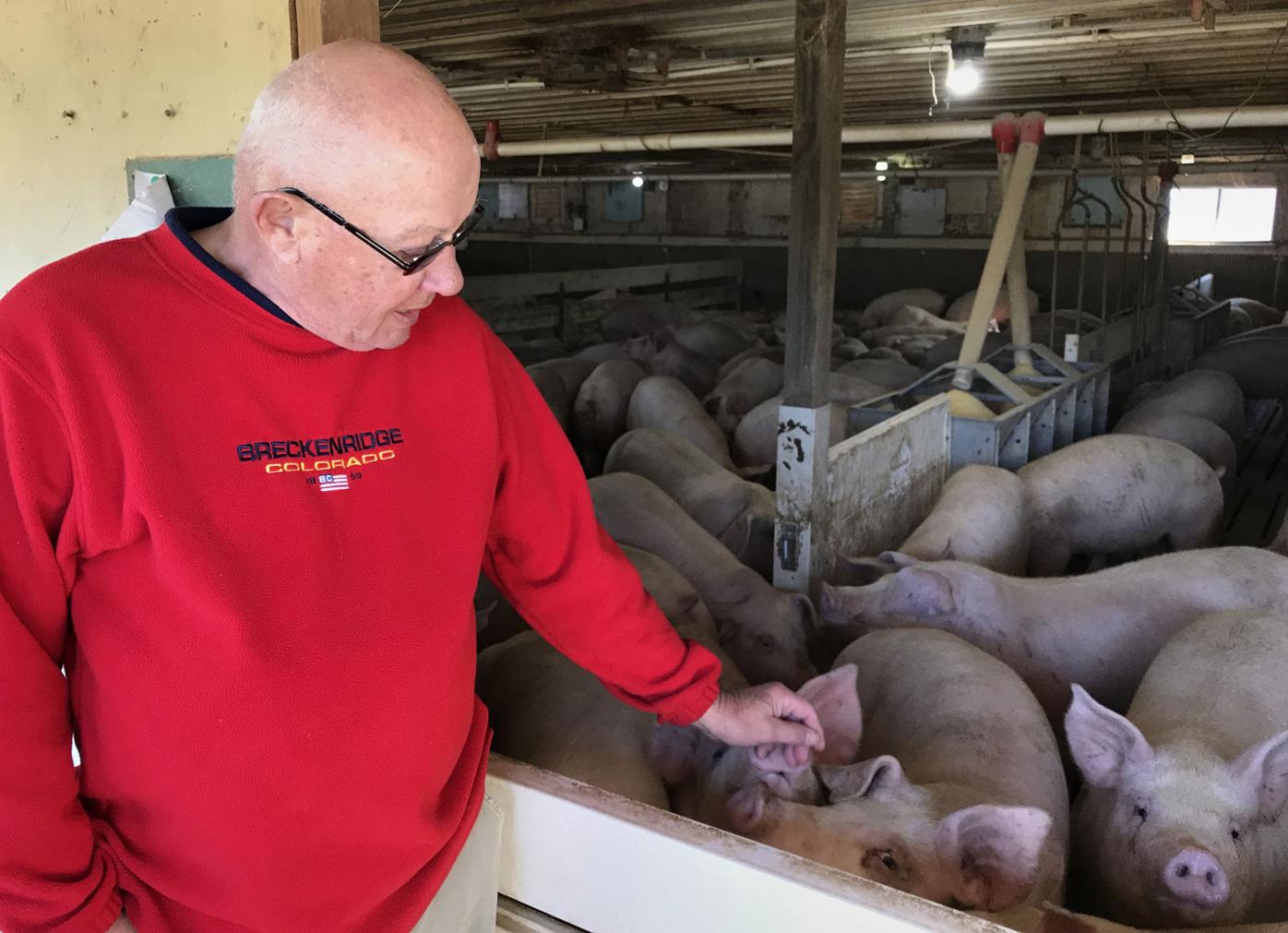 With his brother and son, Leo Koppelman runs a contract feeder pig operation. About 3,000 mixed-breed Hampshire-duroc-Yorkshires are on the farm at any one time. He raised his first litter of pigs as a Cleveland High School FFA project in 1955. The 100-acre Cleveland Township farm has been in Koppelman’s family since 1862. Before they switched to hogs in the late 1960s, his father had raised mink for about 50 years. (Photo by Ann Wessel, BWSR) 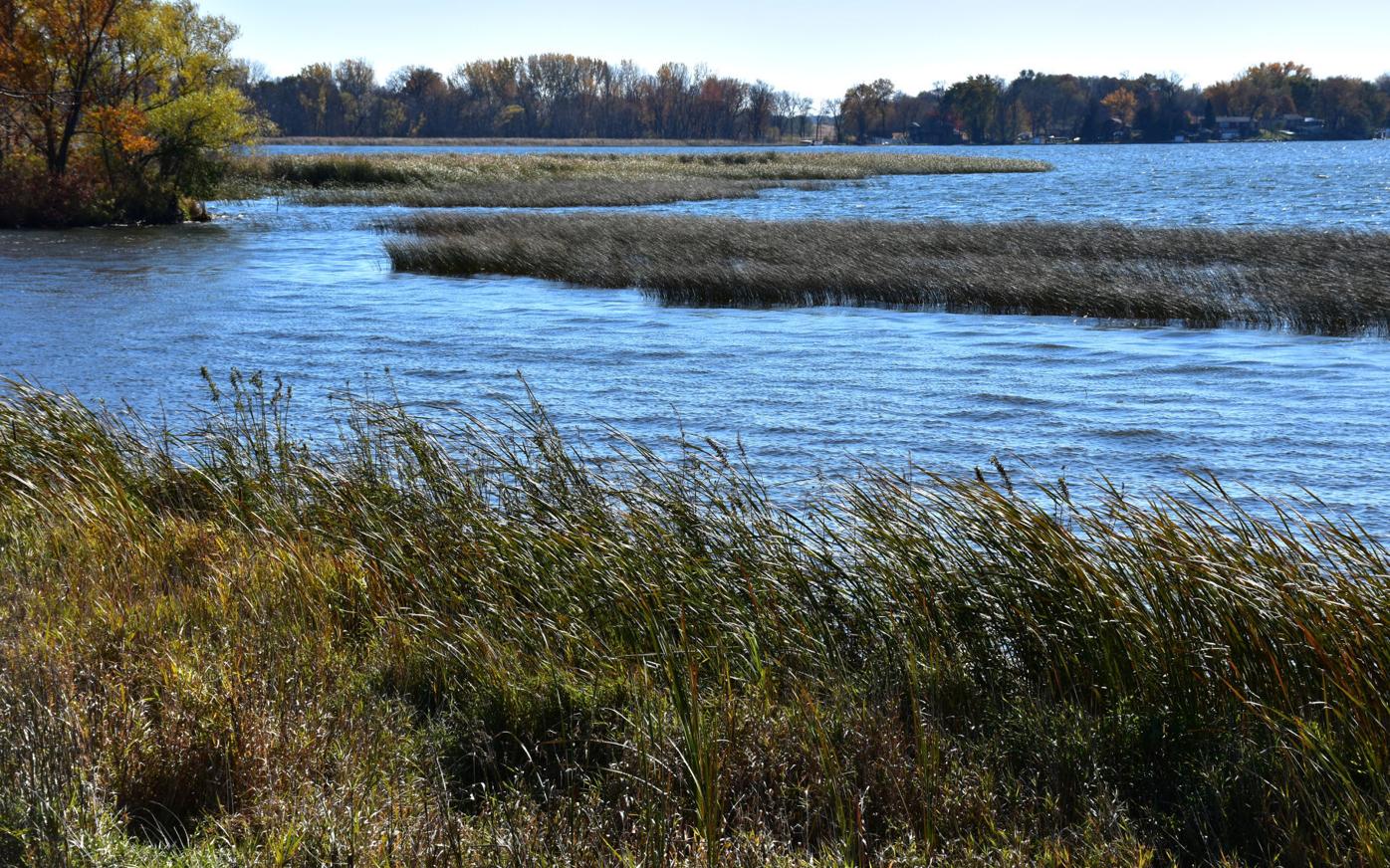 Le Sueur County SWCD’s $484,000 phosphorus reduction project, made possible with a Clean Water Fund grant from BWSR, aims to improve water quality in the German-Jefferson chain of lakes with strategically placed best management practices that help to reduce nutrient loading. The chain lies within the Cannon River watershed, which drains into the Mississippi River. (Photo by Ann Wessel, BWSR) 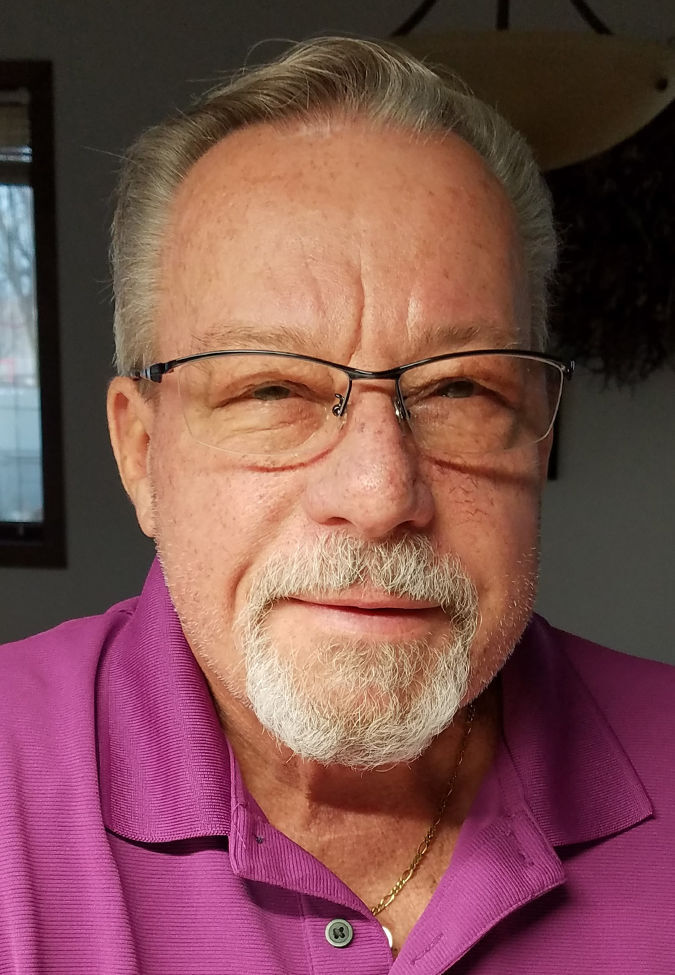 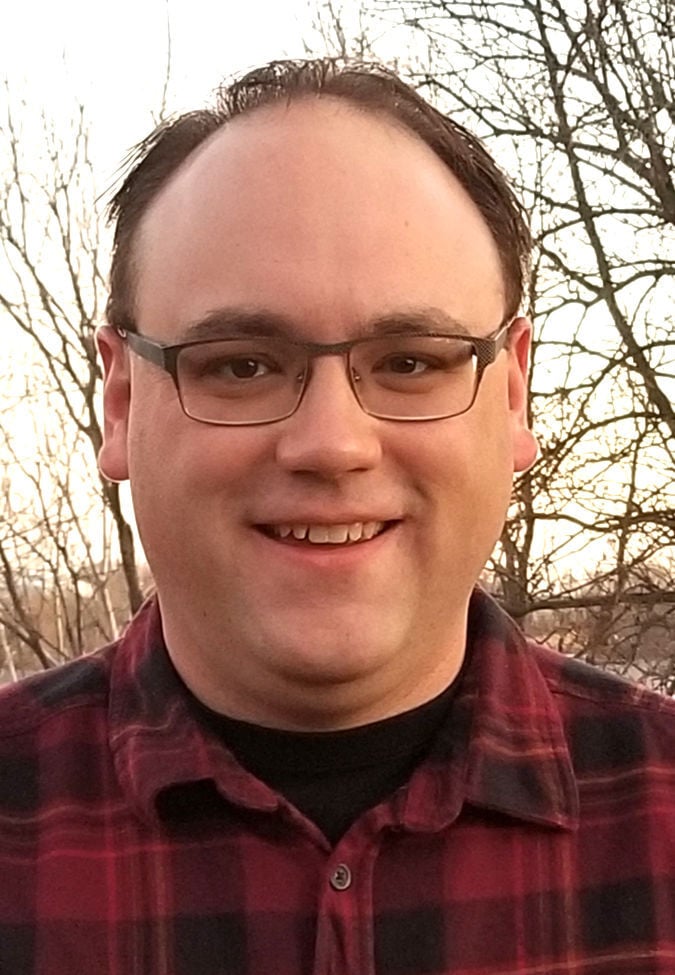 A local government agency and agricultural landowner teamed up to improve water quality in the German-Jefferson lakes chain.

The most conspicuous of Le Sueur County Soil and Water Conservation District’s water quality improvement projects restored a 2.5-acre wetland at the edge of a hog farm directly across a county road from Middle Jefferson Lake. The project will help to prevent potentially harmful pollutants from reaching the nearby lakes.

“The water doesn’t come off of our farm, but we get blamed for it, because it runs across our property,” said Leo Koppelman, who runs the feeder pig operation with his brother and son. “All I’ve heard is, ‘Koppelman’s hog farm is polluting the lake.’”

Middle Jefferson — one of five lakes in the chain that includes German, East Jefferson, West Jefferson and Swede’s Bay — is impaired for aquatic recreation due to nutrient loading. The SWCD’s $484,000 phosphorus reduction project aims to improve water quality in the chain with strategically placed best management practices that help to reduce nutrient loading. The chain lies within the Cannon River watershed, which drains into the Mississippi River.

“Whenever you have a landowner who wants to do something along a major recreational lake, you want to be able to do that,” said Ryan Jones, the Mankato-based South Central Technical Service Area engineer who worked on the wetland design.

The $40,000 wetland project on Koppelman’s land now diverts water from a ravine and treats runoff from about 200 acres — most of it from neighboring fields fertilized with cow manure and hog manure — before it enters the lake.

The Cleveland Township site is one of 13 identified as high priorities within the 15,400-acre watershed, based on terrain analysis, the Total Maximum Daily Load (TMDL) study, and onsite verification. It’s one of 10 that Mankato Water Resource Center monitoring had identified and prioritized years earlier.

A $387,000 Clean Water Fund grant from the Minnesota Board of Water and Soil Resources made it possible for Le Sueur SWCD staff to pursue projects with willing landowners. Matching funds include $34,000 from Le Sueur County’s aggregate mining tax. Landowners’ share was tiered, based on projects’ priority.

“That’s what I’ve always wanted to do, but I’ve never had the resources to do it myself, or never felt that I wanted to do it for somebody else just to appease them,” said Koppelman, whose share was 10%.

Not the first project

Over the years, the Koppelmans had taken steps to curb runoff.

In the 1970s, when the county determined that overflow caused by rain and snowmelt was polluting the lake, the Koppelmans built a lagoon and closed a couple of barns. Six years ago, Koppelman enrolled land in the federal Conservation Reserve Program and replaced a 1960s-built gabion basket. Designed for erosion control, it no longer functioned properly. Most recently, Environment and Natural Resources Trust Fund dollars made a bluff stabilization possible.

“I always tell these lake associations, ‘If you want to do something for the lake, you need money. Pancake feeds. Do something. If you can’t bring something to the table, how are we going to have the other half come to the table?” Schultz said. “I feel like our role is bringing these two together and making sure that we understand that we’re moving forward together. Leo’s been a great example of how this works.”

“Our goal is to work with anyone and everyone around the chain of lakes that is interested in preserving the quality of the water,” said association President Ralph Redding.

The 136-member association raised $10,000 through a raffle and event at Beaver Dam Resort, situated on the chain of lakes. To raise the rest, Redding asked area businesses to contribute items for an auction.

“What benefits are we going to obtain from the phosphorus runoff project?” Redding said. “The quality of the water should improve.”

More work to be done

The 21 best management practices completed by early December 2020 represent about 70% of the work planned in connection with the Clean Water Fund grant, which runs through December 2021. Practices tied to the grant include structures designed to slow and filter runoff, 275 acres of cover crops, and two wetland restorations totaling about 27 acres.

The Koppelman project alone is projected to reduce soil erosion by 161 tons a year, curb sediment loading by 69 tons a year and reduce phosphorus loading by slightly more than 79 pounds a year.

“If they’re all completed and function at their fullest, we will address 40% to 50% of the recommended phosphorus (reductions) from the WRAPS,” Schultz said, referring to the Minnesota Pollution Control Agency’s Watershed Restoration and Protection Strategy.

Phosphorus feeds the algae that can turn lakes green.

Nutrient impairments are just one factor affecting the watershed. Schultz said the SWCD also is dealing with higher-than-average lake levels and flooding, caused in part by increasingly frequent heavy rains.

The Jefferson chain of lakes’ water level in 2019 was 1.63 feet higher than the historical average, which dates to 1971. (Technically, German Lake levels are recorded separately. Because German Lake is connected to the chain, its levels vary only slightly.)

A 6-inch rain put Koppelman’s wetland restoration to the test this summer shortly after construction finished.

“Everything worked exactly the way it was supposed to work. It took all the water that would run down the ditch and (across) our driveways. It stopped everything. It backed that excess water up in the wetland area,” Koppelman said.

Jones saw the flash-flood warnings for Le Sueur County that weekend. Then he received a text with photos.

“Anytime anyone does that after it rains, I kind of cringe. I always think of the worst-case scenario. Maybe that’s part of being the engineer,” Jones said. But the news was good. “The concept and all the engineering paid off because the basin took the water and was able to function correctly.”

Koppelman said several neighbors have complimented him on the project. Jones said passersby have given the highly visible site a lot of attention. That could generate more landowner interest in SWCD conservation projects.

“We are trying to have people adopt cover crops. If we can get them to do some of those (practices), we’re going to catch those numbers faster than we have ever dreamed of, more than a BMP (best management practice) or anything else, because we’re going to have vegetation on these fields, in theory, year-round,” Schultz said of meeting phosphorus reduction goals.

The SWCD stresses that reduced inputs lead to savings.

“There’s a lot of farmland, but if we can get some of those landowners to start adopting these ideas, we could make some large strides,” Schultz said.

The Minnesota Board of Water and Soil Resources’ mission is to improve and protect Minnesota’s water and soil resources by working in partnership with local organizations and private landowners. See more at bwsr.state.mn.us.