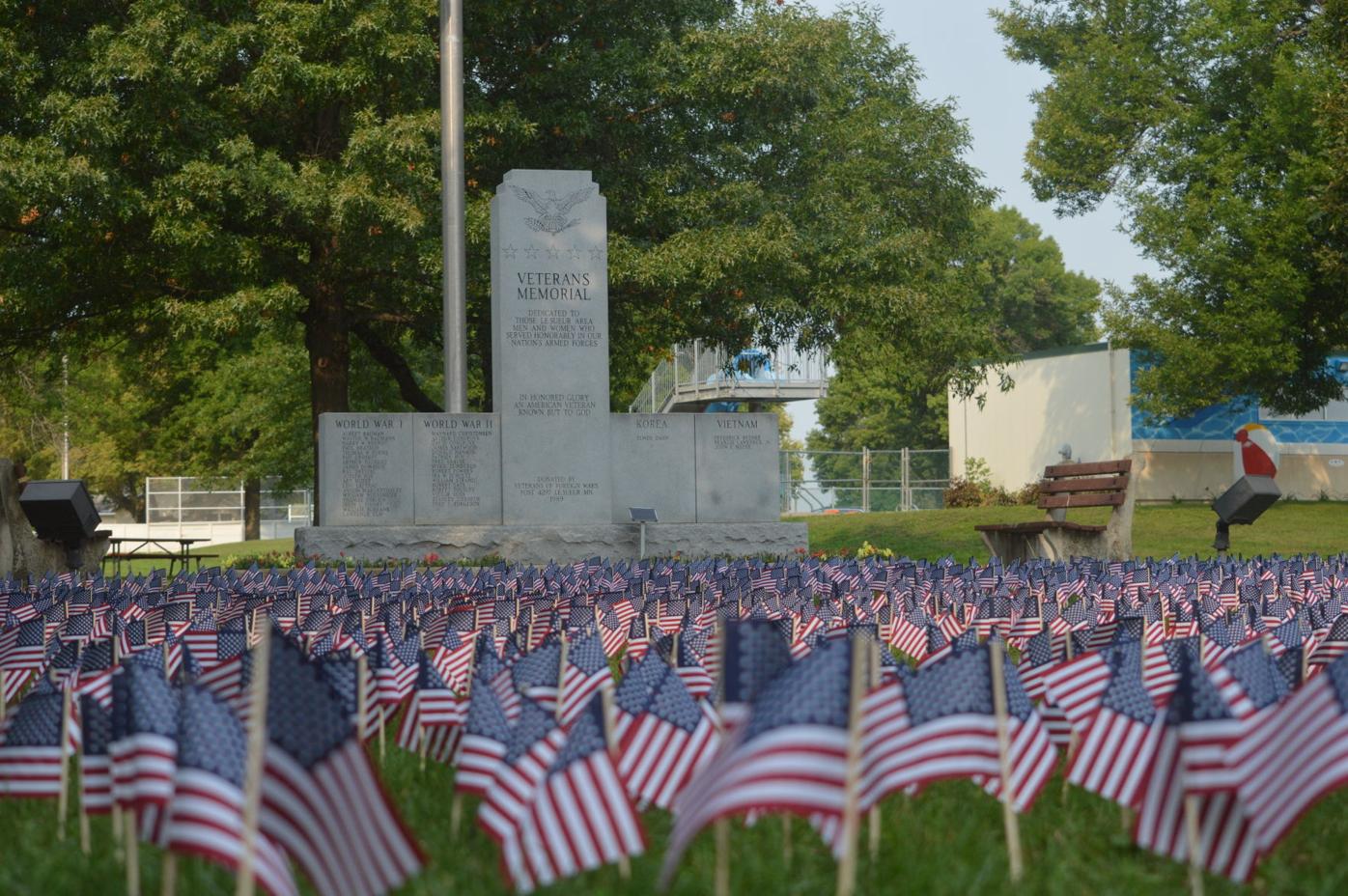 A total of 2,977 flags were placed outside the American Legion Park Memorial for the 20th anniversary of the Sept. 11 terror attacks. The display is a visual representation of each victim that lost their life. (Carson Hughes/southernminn.com) 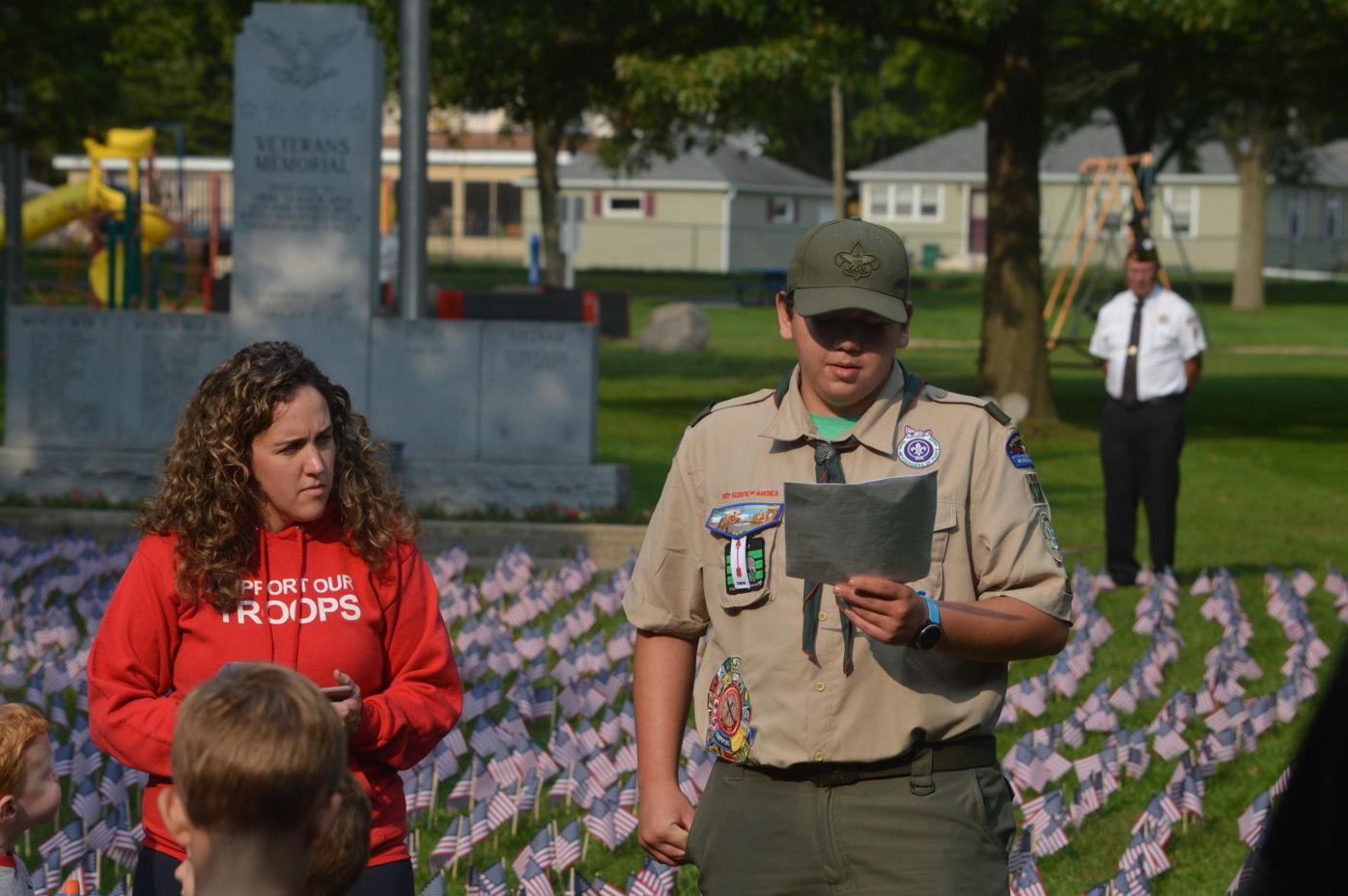 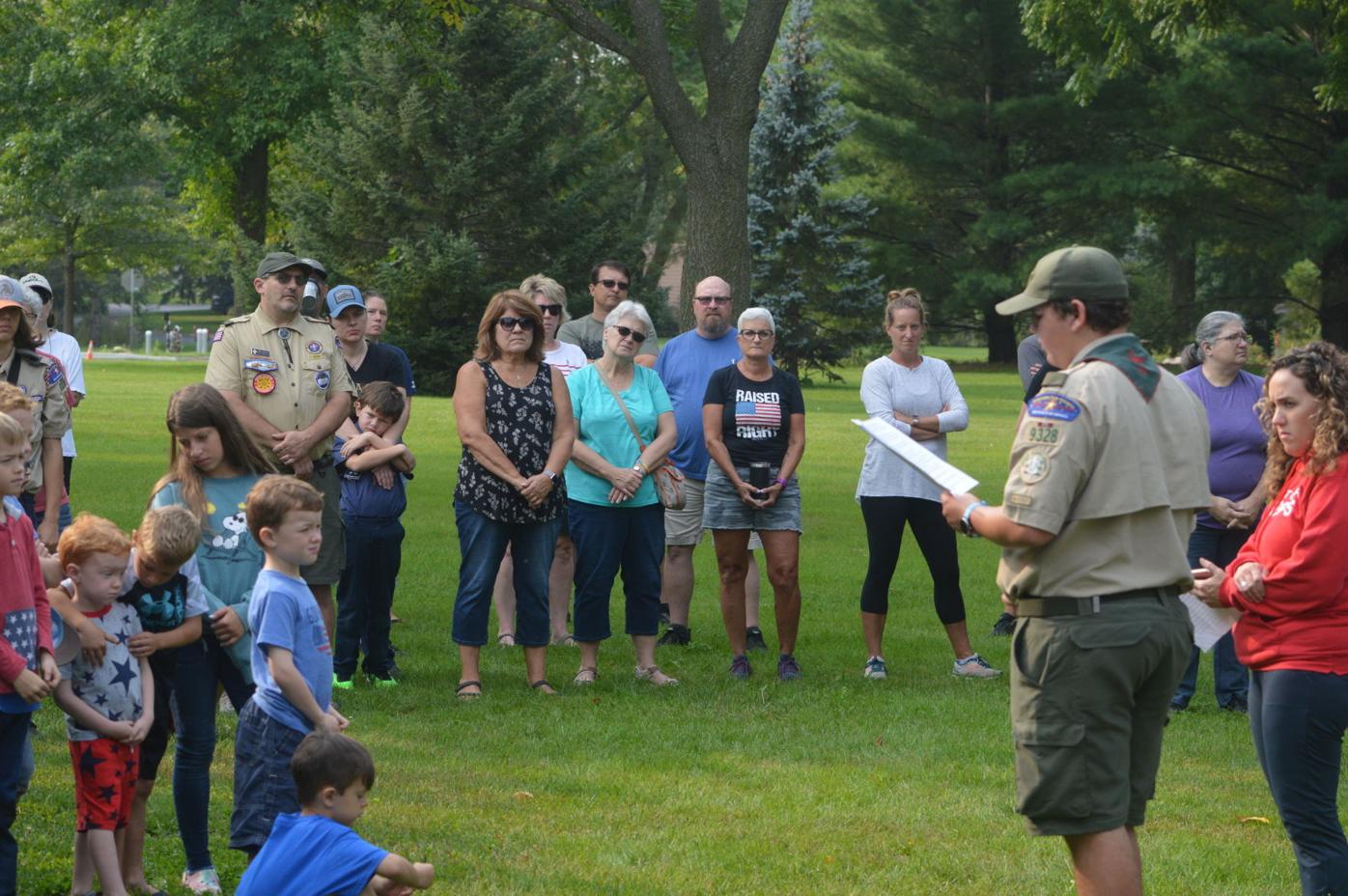 A small crowd gathered in American Legion Park in remembrance of the tragedy of Sept. 11. (Carson Hughes/southernminn.com) 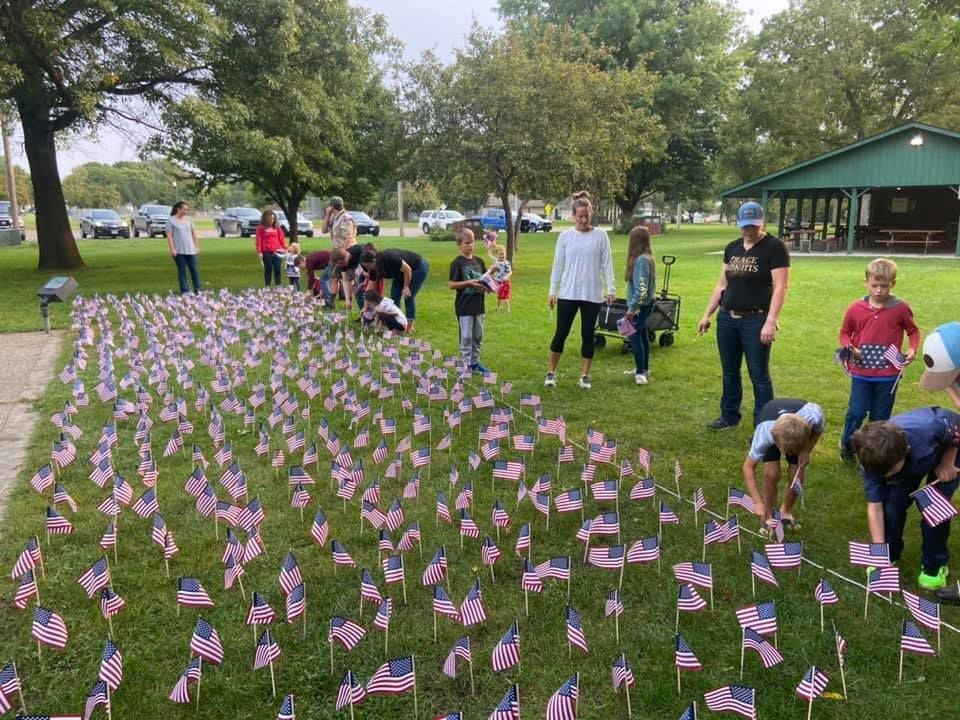 The greenery in front of the American Legion Veterans Memorial in Le Sueur was exchanged for a radiant flurry of red, white and blue on Saturday morning. A display of 2,977 American flags was planted in the earth, a banner for each victim of the deadliest terror attack in United States history.

Like so many Americans, Le Sueur resident Emily Sunderman vowed to never forget the terror attacks on Sept. 11, 2001 that led to the collapse of the World Trade Center and forever changed the course of history. The phrase was adopted throughout the country shortly after the attacks, but on the 20th anniversary of 9/11 the message has become increasingly relevant.

This year’s graduating classes were among the first to be born in the years after 2001. For children, teens and young adults, the Sept. 11 attacks are not a memory, but a history lesson. To ensure the details of 9/11 do not fade, Sunderman organized the 20th anniversary memorial at American Legion Park in Le Sueur.

“It’s really important not only for those who were alive that day, but those who have been born since Sept. 11, 2001, to not let it pass, to always let it be a day of special remembrance and recognition for what happened that day and the way that it has changed our country since then,” said Sunderman.

On Saturday morning, Sunderman, along with her children and the aid of the local Boy Scout Troop, planted each flag on the park grounds. She and her husband Tyler Sunderman helped set up a similar display in college at the U of M Coffman Memorial Union on the five year anniversary of the attacks, but this was their first time crafting the memorial in Le Sueur.

“The image of all of the flags that morning is one that will never leave my mind,” said Sunderman. “So we vowed to keep the tradition going to make sure that future generations would be able to have a proper memorial to remember the events of that day.”

Sunderman, the Scouts and the Le Sueur American Legion and VFW Posts also held a memorial service at 9:45 a.m. Legion members stood guard over the memorial while dozens of community members gathered around.

A total of 19 terrorists hijacked four California-bound flight between 7:59 a.m. ET and 8:42 a.m. The world was awoken at 8:46 a.m. when hijackers then crashed American Airlines Flight 11 into the North Tower of the World Trade Center. Responders mobilized immediately and President George W. Bush was alerted at 8:50 a.m. while visiting an Elementary School in Sarasota Florida.

A second explosion erupted from the World Trade Center when hijackers crashed United Airlines Flight 175 into the South Tower at 9:03 a.m. Just 34 minutes later a third flight crashed into the Pentagon, killing 59 on the plane and 125 on the ground. News only worsened when at 9:59 a.m. the South Tower of the World Trade Center collapsed. The North Tower fell at 10:28 a.m. after burning for 102 minutes, followed by the collapse of Tower 7 at 5:20 p.m. A fourth flight aimed at Washington D.C. crashed in a field near Shanksville, Pennsylvania at 10:03 a.m, killing everyone on board.

Von Eschen said that delivering the reading and seeing the field of flags taught him details about the attacks he hadn’t known before and gave him a new perspective on how many people were killed. The high school student said he learned about 9/11 in class and how his own teachers reacted to it at the time, but didn’t know the timeline of how the attacks occurred or the number of deaths.

“It’s not an event that should be forgotten, it should be an event that’s taught in schools,” said Von Eschen. “Reading that reading was probably the most information I got about it.”

After Von Eschen’s reading, Sunderman led the crowd in a moment of silence and convened the ceremony. The flags remained in place throughout the day while Von Eschen, other scouts and veterans stood by to keep watch and talk with visitors about the significance of the memorial.”

Now that she has children of her own, Sunderman is passing down lessons on the importance of memorializing the day to her 10 year old son William. William said he learned that many people died on 9/11, that it was important to be respectful of the flag and that the attacks were followed by the US War in Afghanistan.

After the success of the 20th anniversary memorial service, the event could become a new tradition for Le Sueur. Sunderman said she wanted to plan a special service every five years with continued involvement from the Boy Scouts to keep the memory of 9/11 alive.