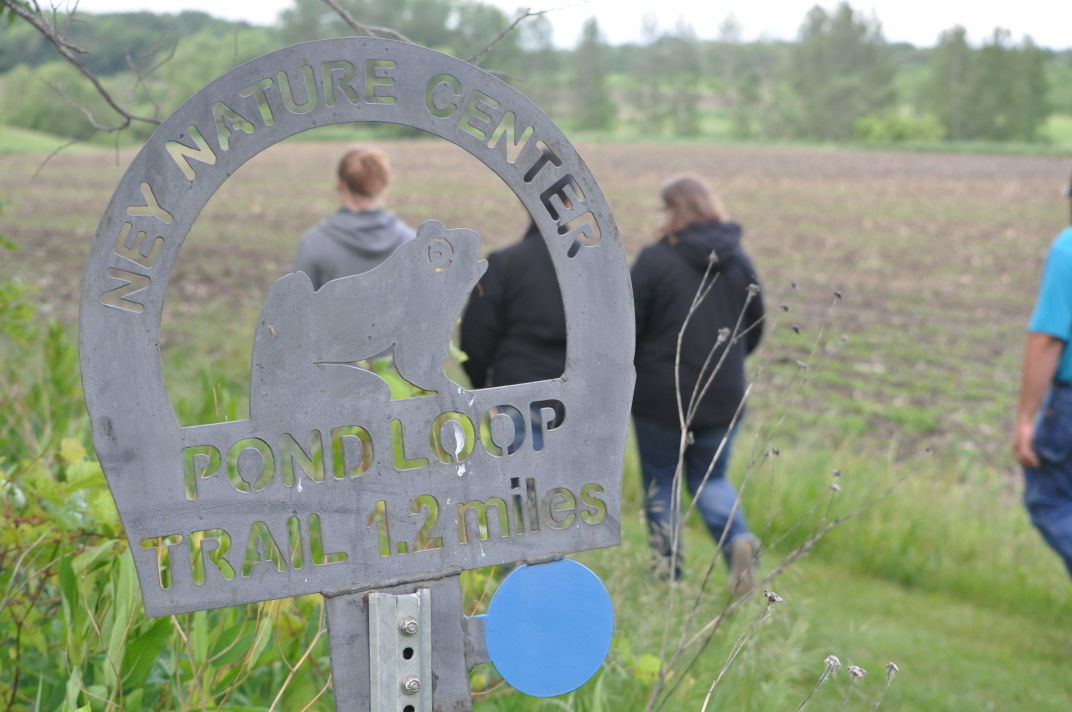 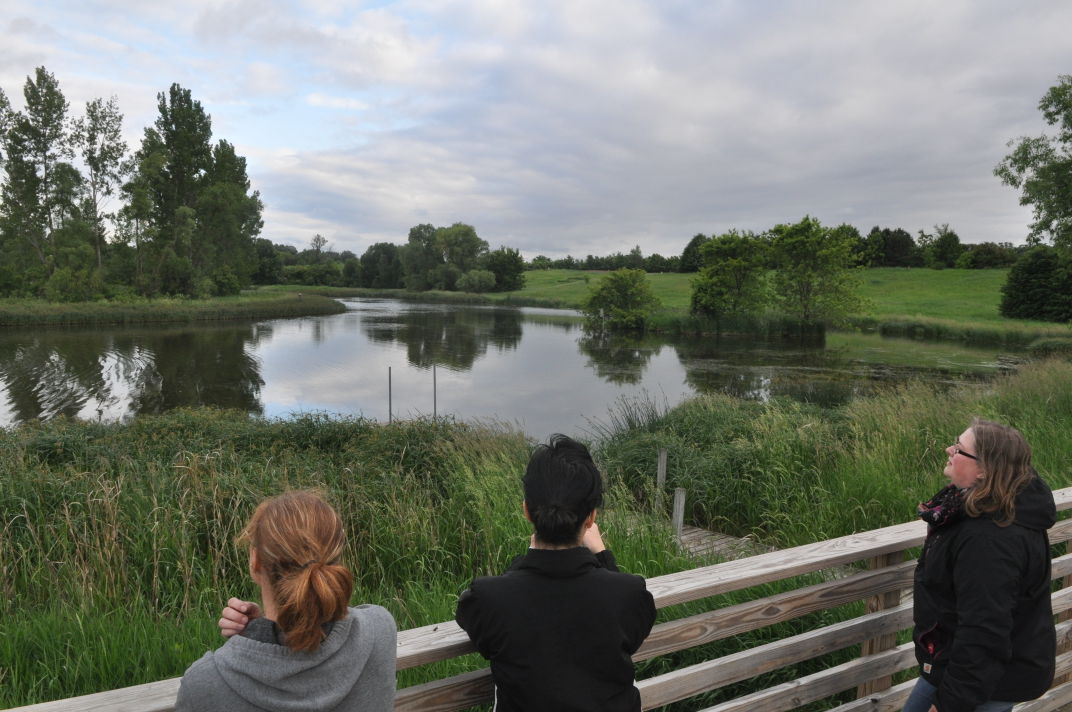 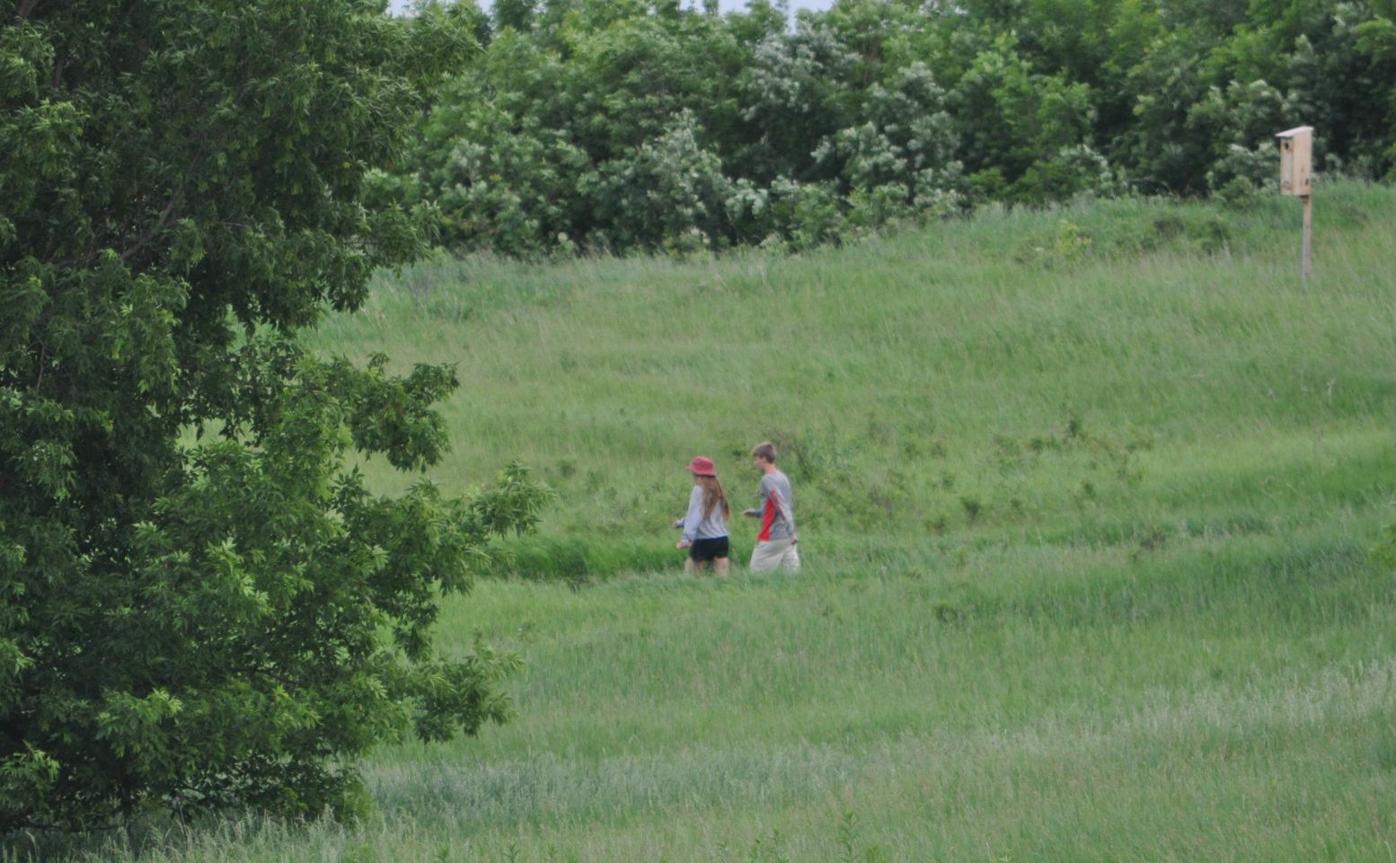 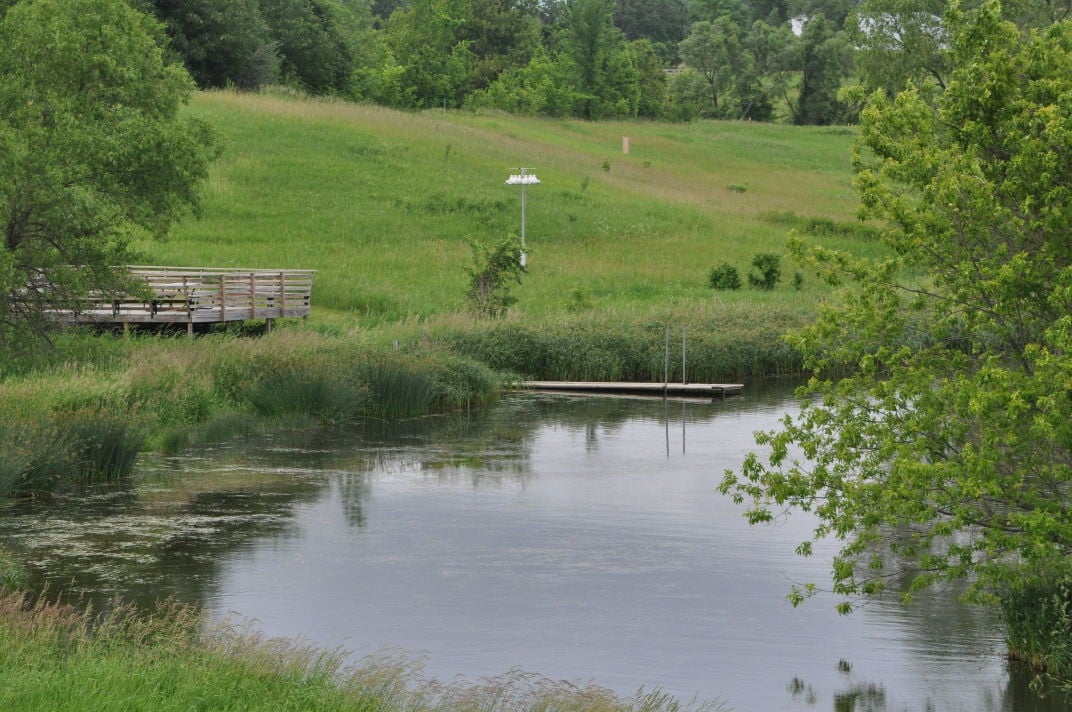 Ney Center’s pond from the south side, with a wooden deck and dock utilized by visitors. (Dana Melius/Le Sueur News-Herald) 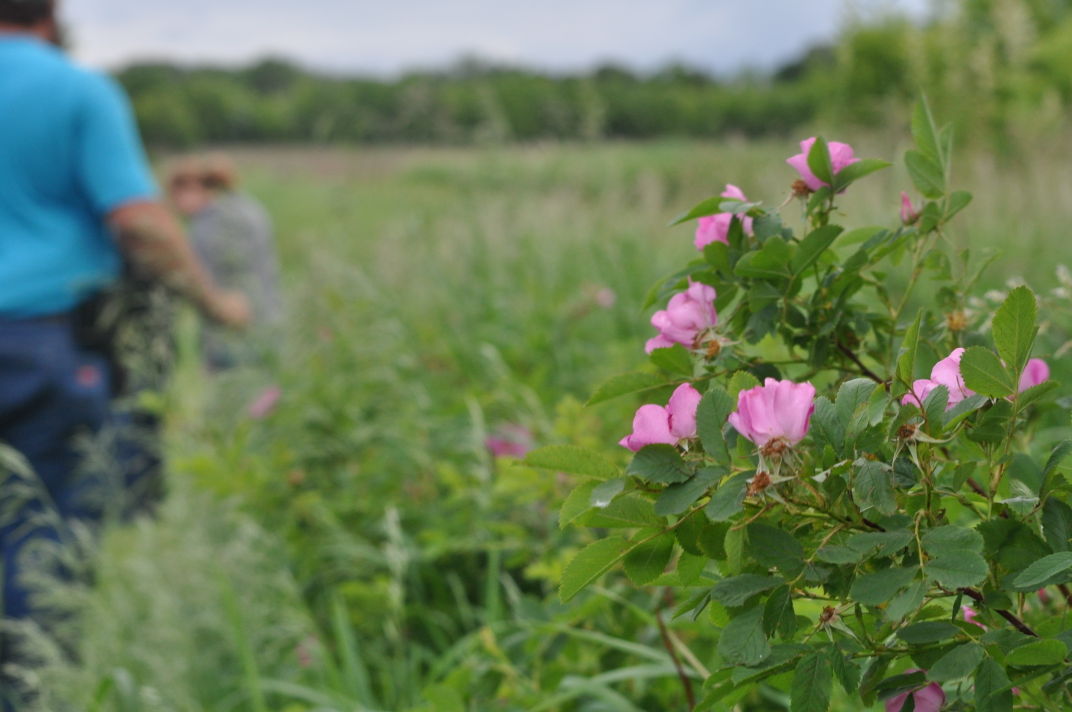 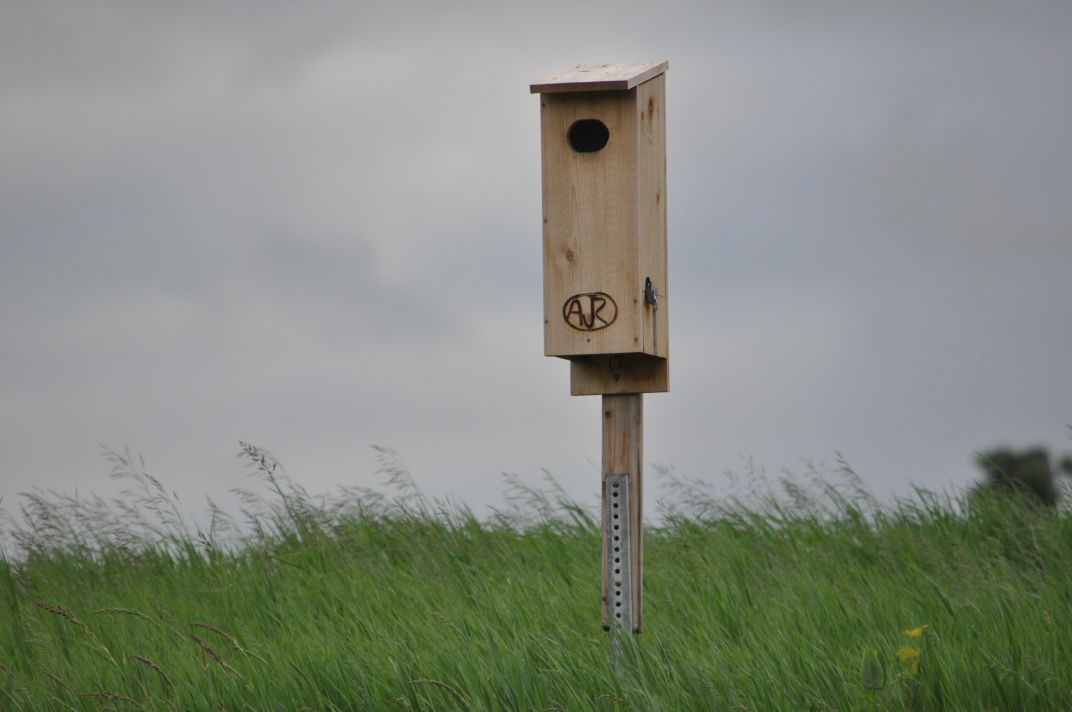 The Ney Center benefits from several Eagle Scout projects, like many of the wood duck houses throughout the 446-acre site. (Dana Melius/Le Sueur News-Herald) 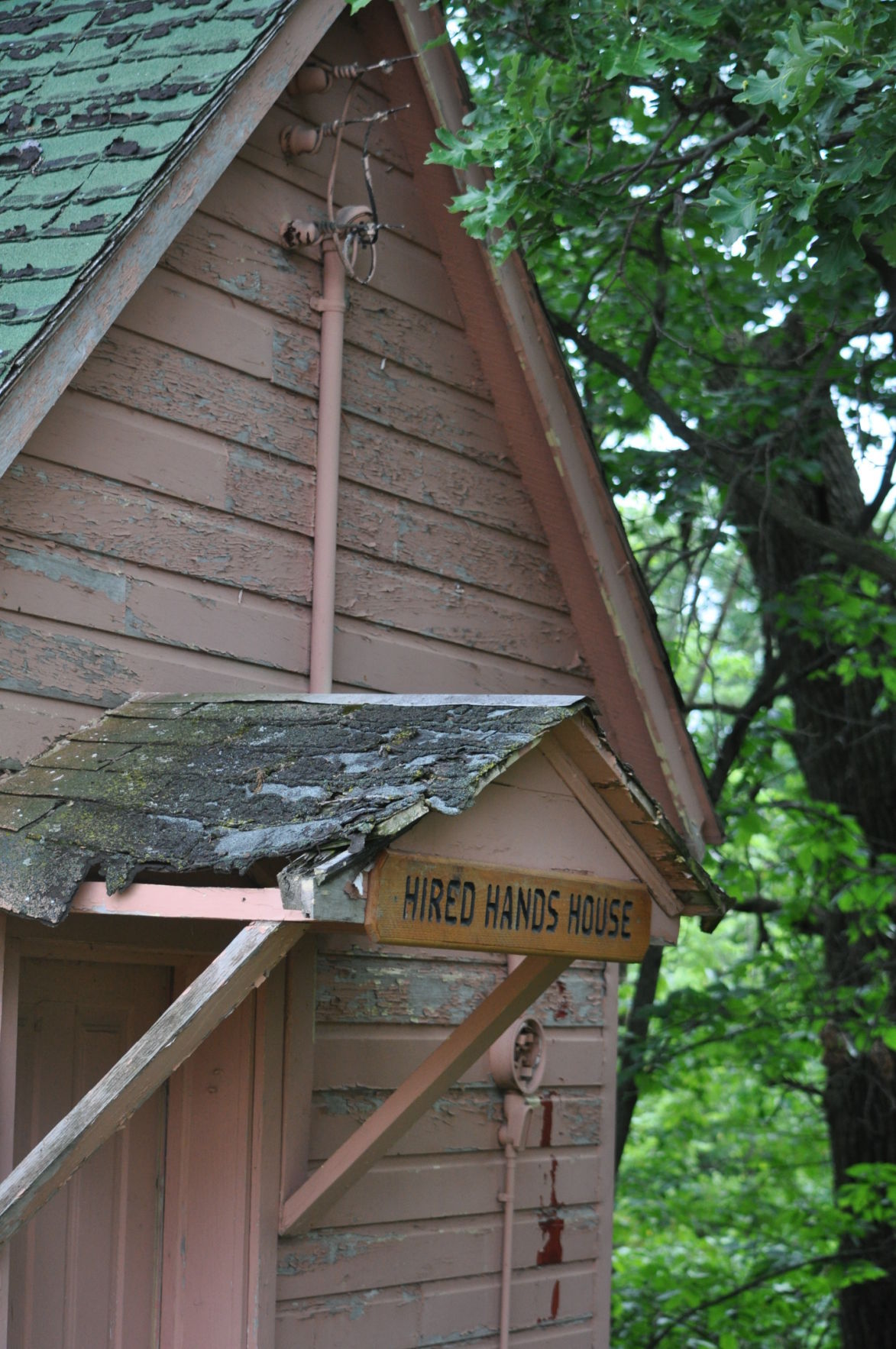 This “hired hands” cottage is among priorities for historic restoration at the Ney Center. 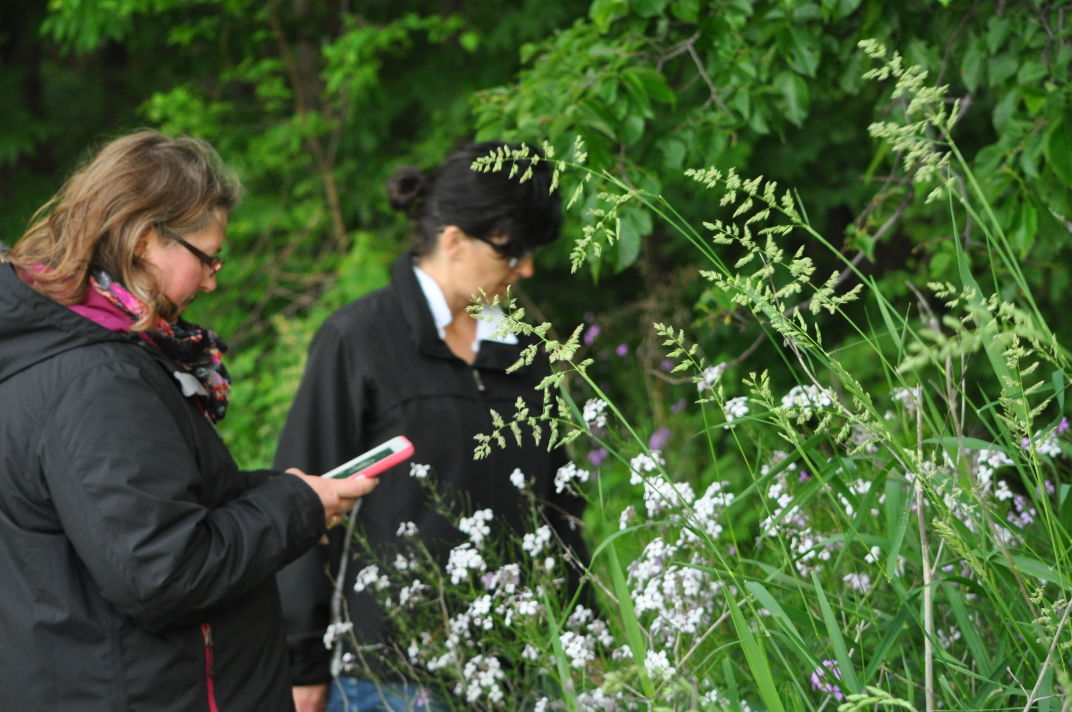 Becky Pollack (left) executive director at the Ney Center, is joined by Kim Schneider of Arlington. Pollack uses a smart phone application to get additional information, taking pictures and getting information back. (Dana Melius/Le Sueur News-Herald)

Ney Center’s pond from the south side, with a wooden deck and dock utilized by visitors. (Dana Melius/Le Sueur News-Herald)

The Ney Center benefits from several Eagle Scout projects, like many of the wood duck houses throughout the 446-acre site. (Dana Melius/Le Sueur News-Herald)

This “hired hands” cottage is among priorities for historic restoration at the Ney Center.

Becky Pollack (left) executive director at the Ney Center, is joined by Kim Schneider of Arlington. Pollack uses a smart phone application to get additional information, taking pictures and getting information back. (Dana Melius/Le Sueur News-Herald)

Despite detours and limited highway traffic through October, the Ney Nature Center awaits those looking for peaceful, natural trails through one of Le Sueur County’s hidden gems.

Continuing to build upon its growing emergence on the county’s northwestern corner, Executive Director Becky Pollack led a small group of participants early Saturday evening during the environmental center’s National Trails Day. Billed as an hour-long event, participants continued well beyond that time along some of the Ney Center’s 10 miles of trails.

Pollack and visitors walked through grass trails which wind through some of the park’s 446 acres. The quiet sounds and natural prairie environment included rolling meadows and wild flowers, the bluffs of the historic Minnesota River Valley, small forests and a variety of wildlife settling into the area. It’s not uncommon for deer to roam through the trails or bald eagles to fly overhead.

And, of course, there’s the famous pond where students from Minnesota New Country School discovered deformed frogs and put both the school and the Ney Center on the map.

“It’s the best job in the world,” Pollack said.

And it’s been one Pollack has enjoyed in one way or another for 20 years. She’s served the past 10 as executive director, but as a student in the Henderson charter school’s second class, she was among those who spent time at the pond. After graduation, she also volunteered at the nature center and served on the nonprofit organization’s board of directors.

On the trails tour, Pollack pointed out some of the wild flowers blooming along the trail, often using a smart phone application to provide additional information. Bees buzzed at one stop. Small oak trees were climbing through parts of the woodlands, one with gigantic leaves, another with some already turning bright red due to an early frost.

An early stop at the pond and the wooden deck overlooking the water allowed pause for group members to ask questions and view the diversity of the land. Two hikers, outside of the trails’ participants, walked together through a trail on the northern side of the pond.

While it was a quiet night on the wildlife side of things, deer tracks were prevalent at several stops. And along the trails, prairie brush worn down by deer was noticeable.

For some, the history of the Minnesota River Valley region was just as intriguing as the trails. Kim Schneider of Arlington, a frequent visitor to the Ney Center and its events, enjoyed the discussion of the park’s buildings and stories of fur traders coming to the site as early as 1820.

Fur traders, according to Pollack, journeyed along the river route, westerly to the Red River and then on to Canada where the furs brought better money or bartered goods. It was illegal trade at the time, as trading was even regulated in those early territorial days, Pollack noted.

Traders would need to stop and water or change horse teams due to the 200-foot climb up the valley bluffs. Walls of one of those early trading posts remain on site, built into the bluffs.

A hired hand’s small cottage was also built into the top of the bluff, according to Pollack, because the Ney family didn’t want to waste good farmland in those early days.

Hope for continued participation despite detour

Railroad bridge reconstruction on the east side of the Minnesota River, between Henderson and the Ney Center, is expected to limit traffic and participants to the Le Sueur County Park this summer. Pollack’s hoping the detour doesn’t stretch beyond its November deadline.

Still, that’s a major inconvenience for the center and its summer activities. Because of that, Pollack said a new bike trail which recently opened is not yet being marketed due to the difficulty of reaching the trail. Also, those who’ve used the trail note it is much more difficult than originally planned, likely for the more experienced bikers, said Pollack.

The typical 2.5 mile distance for Henderson residents now totals about 15.5 miles, while those coming from the Le Sueur area add only about 2.5 extra miles, changing from a 9-mile trip to about 11.5 miles.

Upcoming activities include a June 19 Summer Solstice Hike, a June 20 Nature Build Camp for third- through fifth-grade students, and a July 11 Art Camp for kindergarten through second-graders.

“We’re having really good turnout for our programs,” reported Michelle Isaacson, administrative assistant and program coordinator at the Ney Center, particularly in the students’ nature and environmental programs. And despite the detour, “we’re really hoping for good turnout this summer.”

The summer will also see the installation of a solar panel, which is estimated to cost $25,700 and could provide up to 28 percent of the power to run the Ney Center site. Pollack is excited about that potential and hopes it leads to additional green energy options.