The new Le Sueur mural, painted by the Le Sueur Community Foundation and volunteers, greets visitors with depictions of some of the community’s most notable features and landmarks. (Carson Hughes/Le Sueur County News) 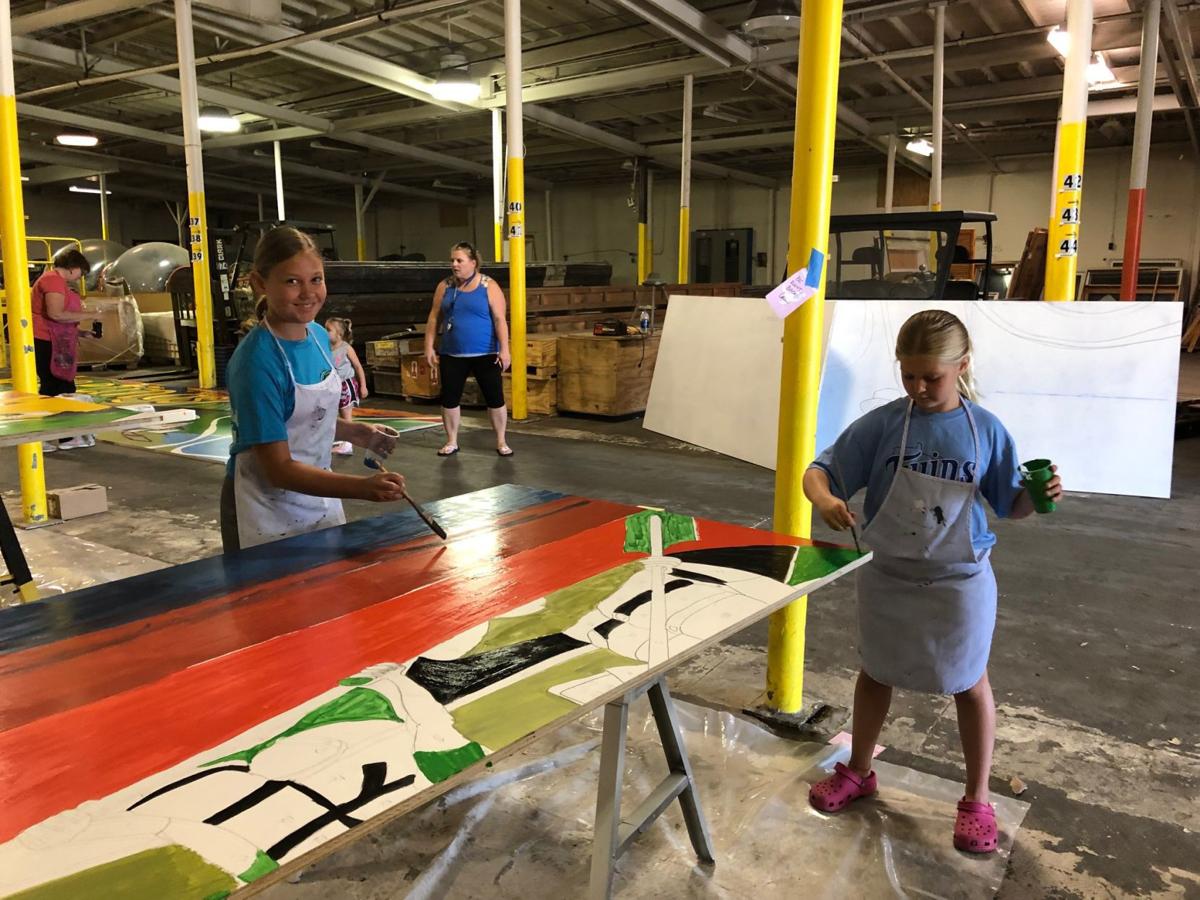 Residents from ages 7 to 75 pulled out their paint brushes this summer.

The community members were helping out the Le Sueur Community Foundation to complete a mural welcoming visitors to the city this summer. The 12-foot by 40-foot painting is lit up on the north side of the old Green Giant building on Main Street and can be seen as drivers head into town from the north side.

“We are very pleased with how it turned out,” said Christa Luna, a member of the Le Sueur Community Foundation that led the project. “It is a great representation of the foundation of our community. Our artist, Lana Beck, was able to take our visions and put it on paper. We are hoping that once visitors pass the factories and see the mural, they get a sense of what Le Sueur was and is: [a] small, rural community, where people live, work and play.”

The mural captures images of Le Sueur past and present, featuring the visage of the Jolly Green Giant, people fishing and canoeing on the Minnesota River, the Mayo House and a sunset over the river valley behind the words “Greetings from Le Sueur.”

“I was thinking about the community, what we have to offer and how we could give visitors a general idea of what our community is all about,” said local mural artist Beck. “We wanted to make it feel like an old postcard so when people come through, we’re sending everyone a postcard.”

Over her 17 years of painting, Beck has painted over 1,800 murals for businesses and homes. For this project, however, Beck wasn’t alone.

Between July and August, 40 volunteers, from kids to adults, assisted in painting the mural. With so many people working on the project, the mural had to be split into 12 4-foot by 8-foot sheets of plywood. Beck also made it easy for anyone to paint it by drawing the mural beforehand and labeling each section of the mural so volunteers would know which colors to use.

“It was kind of a challenge for me,” said Beck. “It was like putting a puzzle together.”

While it was a new experience for Beck to be painting on plywood, it was also necessary. The old Green Giant building is privately owned, so if a new owner bought the building and wanted the mural removed, the painting could simply be detached from the building and moved to a new location. Fortunately for the Le Sueur Community Foundation, Scott Churchill, the owner of the building, has both allowed the mural to be located on his property and assisted the project. Churchill lent empty space in the warehouse for the Community Foundation to paint in and donated lights so the mural would be visible at night.

The project turned out to be a success. The Le Sueur Community Foundation raised the $2,000 needed for the project with donations from local organizations, businesses and individuals and 180 gallons of paint from the Ace Hardware Paint the Town grant awarded by the Southern Minnesota Initiative Foundation.

“We had a lot of fun together,” said Beck on painting with the volunteers. “I was surprised at the age differences. I saw kids parents and grandparents. I even heard one kid asking his parent or grandparent ‘Can we come back again?’ So I think the volunteers had fun, too.”