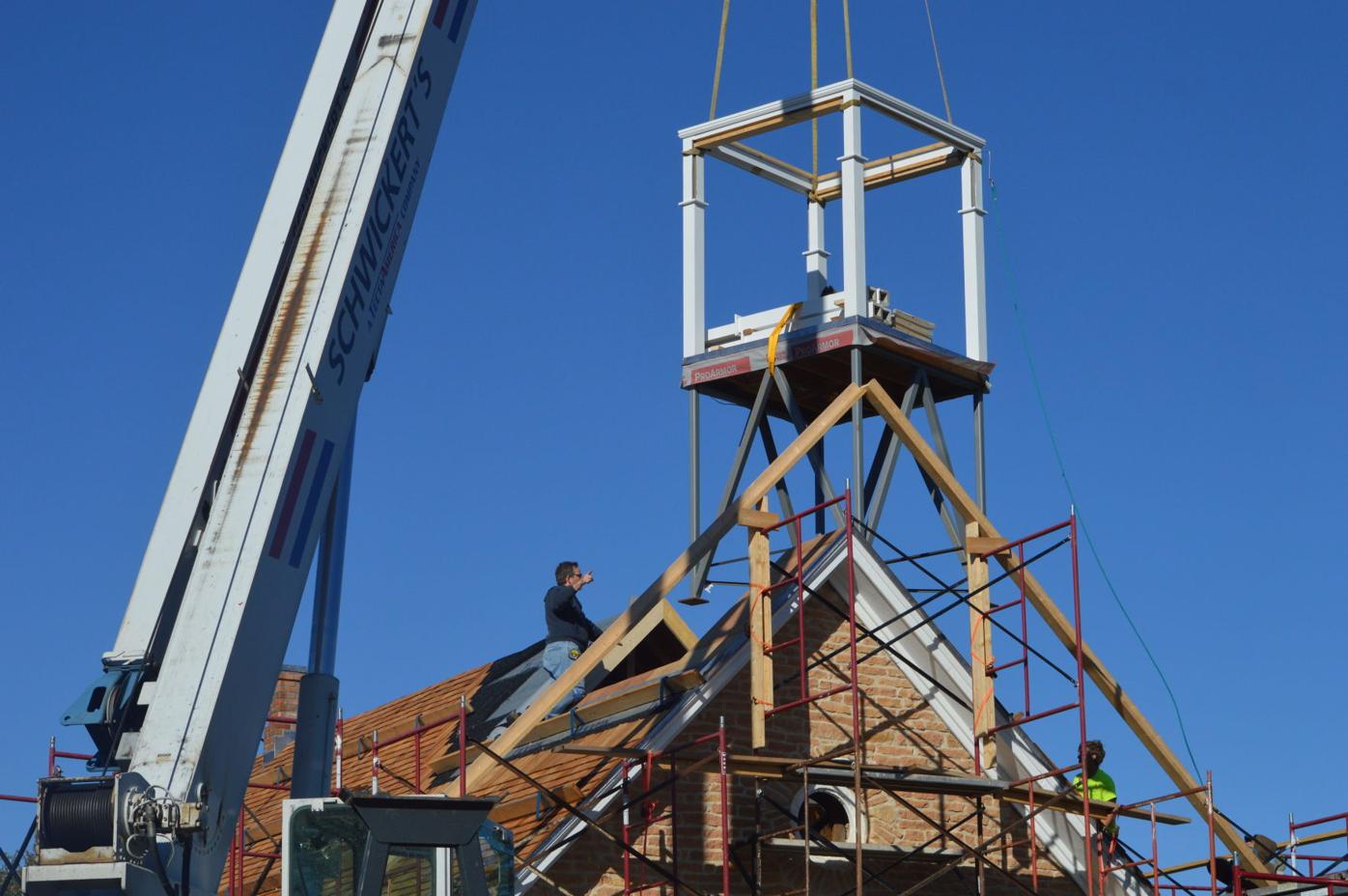 A crane lifts the new belfry onto the Ottawa Stone Church. Made with tubular steel, this belfry was made with the hope of seeing the church open for another 100 years. (Carson Hughes/Southernminn.com) 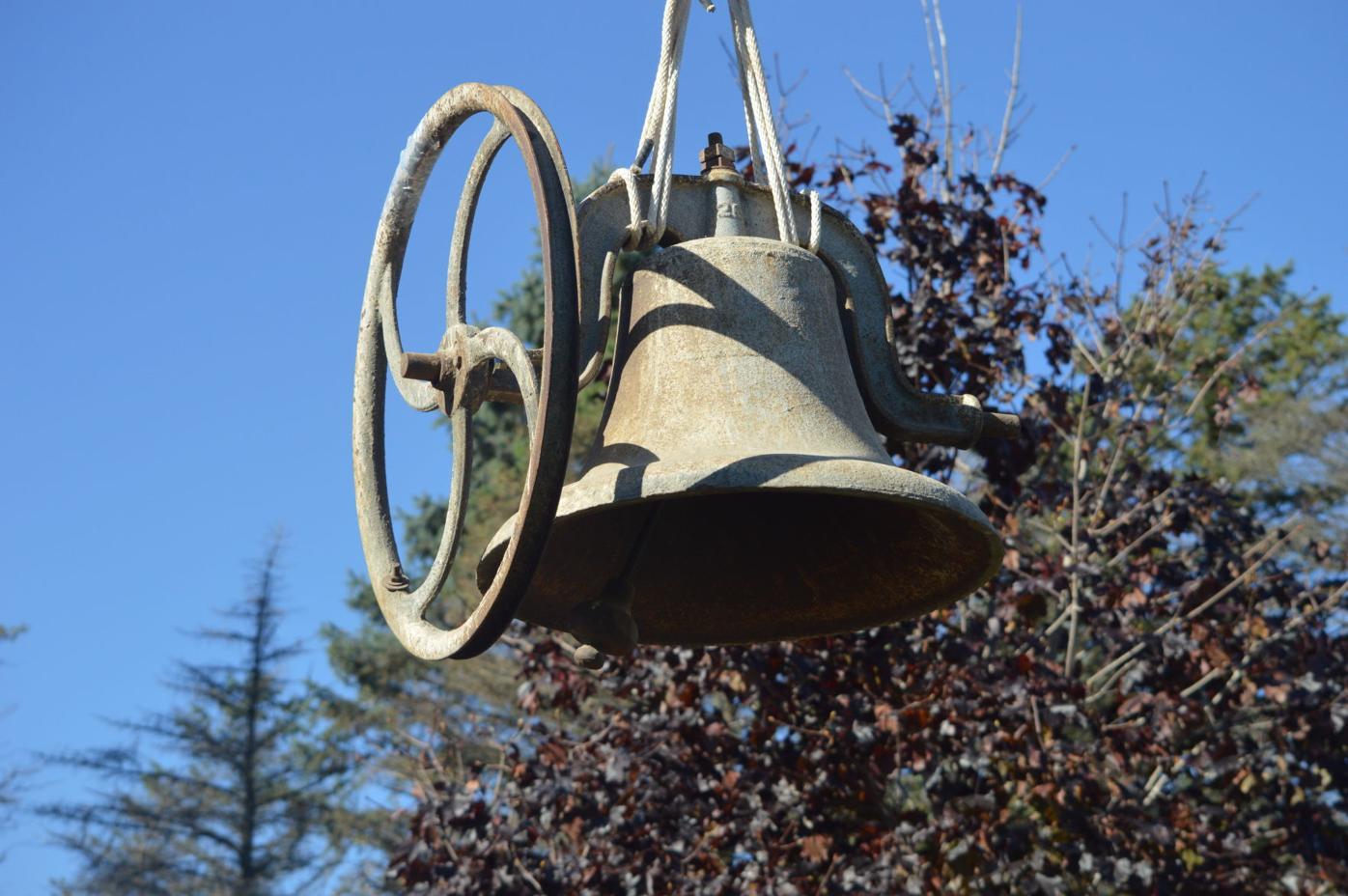 The Ottawa Church Bell is the only part of the original structure to be included in the new bell tower. After 160 years, the bell can still give a powerful ring. (Carson Hughes/Southernminn.com) 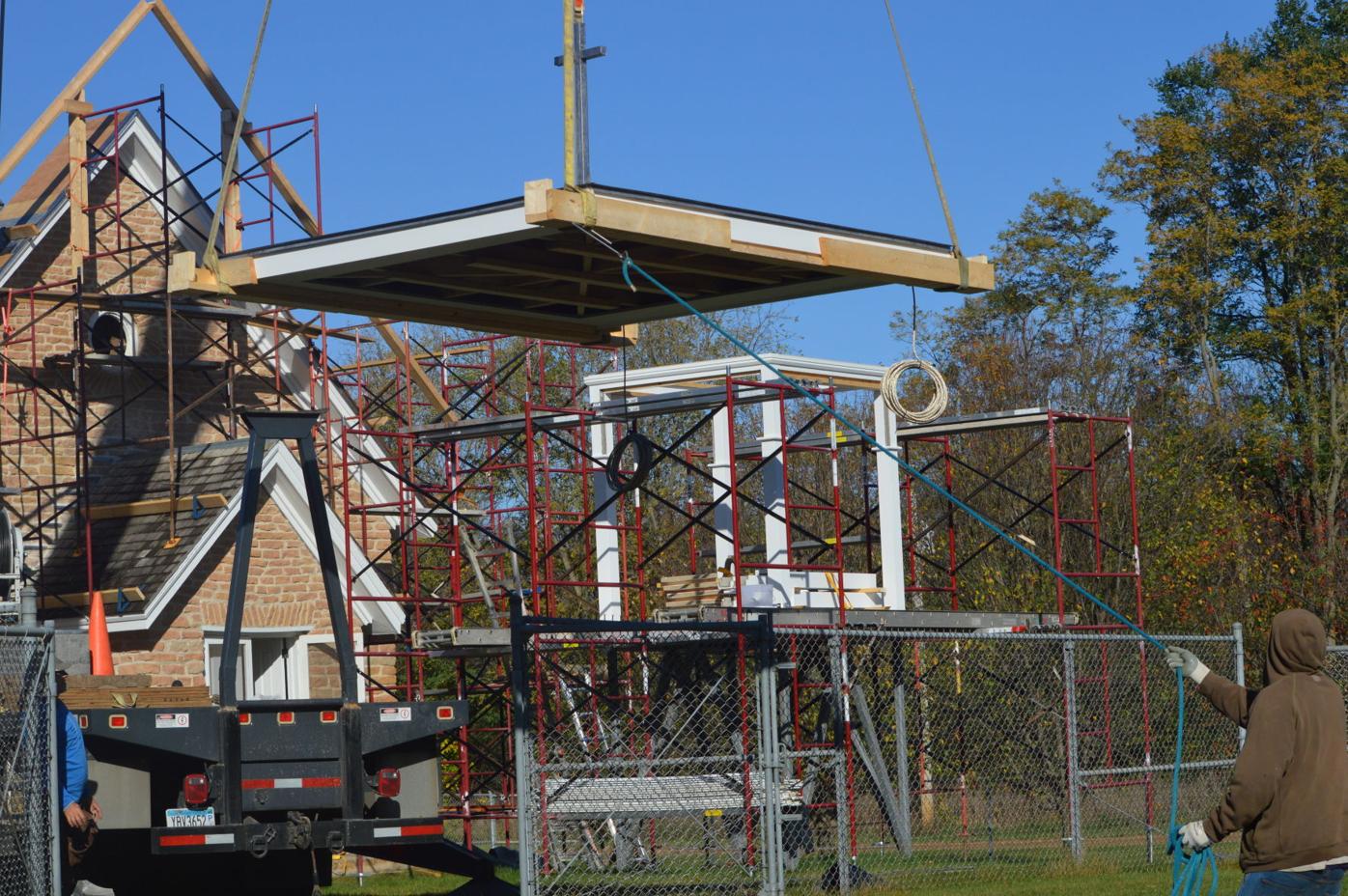 A pointed cap with a cross on top is lifted to be placed on top of the belfry on the Ottawa Stone church (Carson Hughes/Southernminn.com) 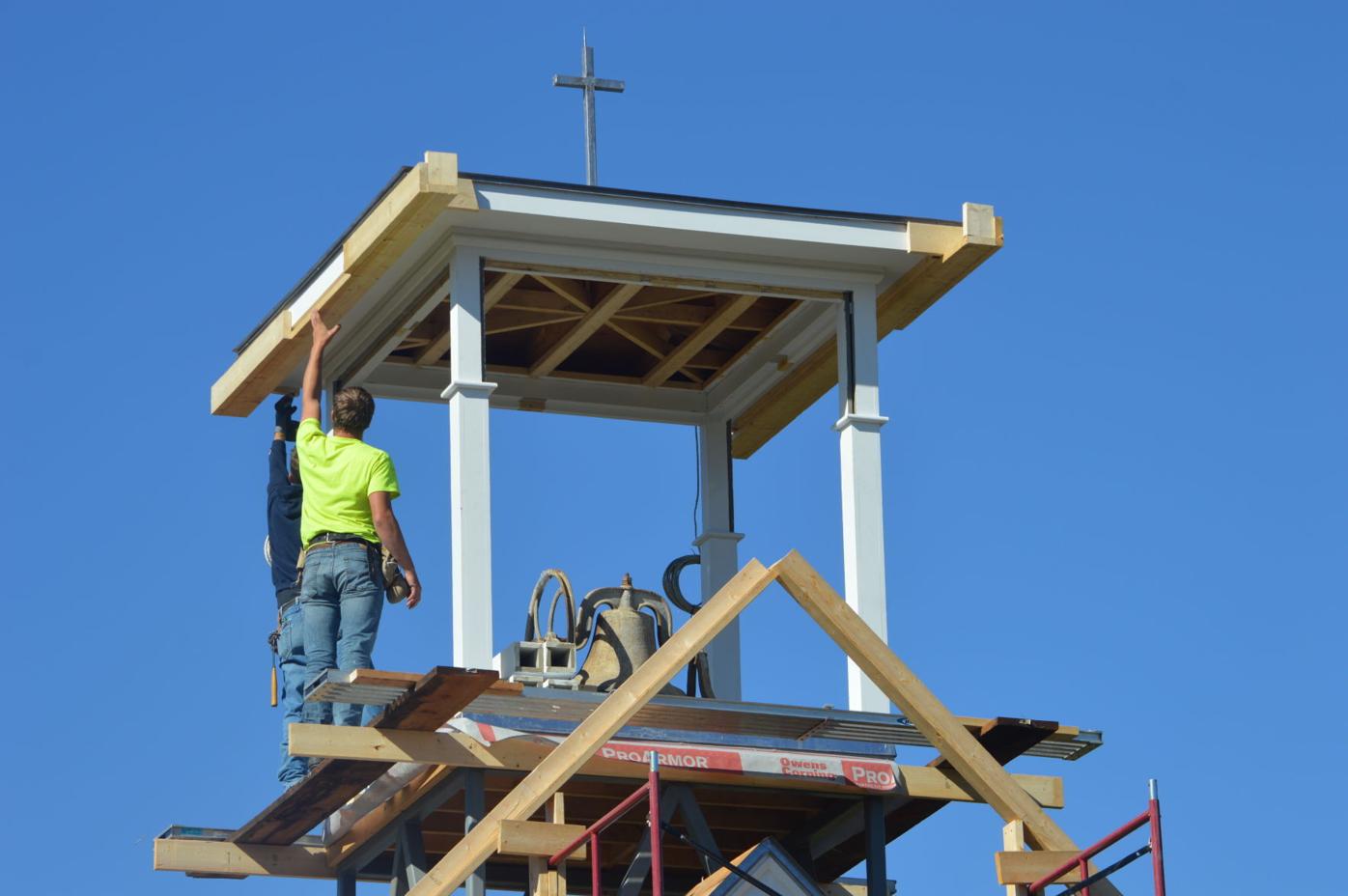 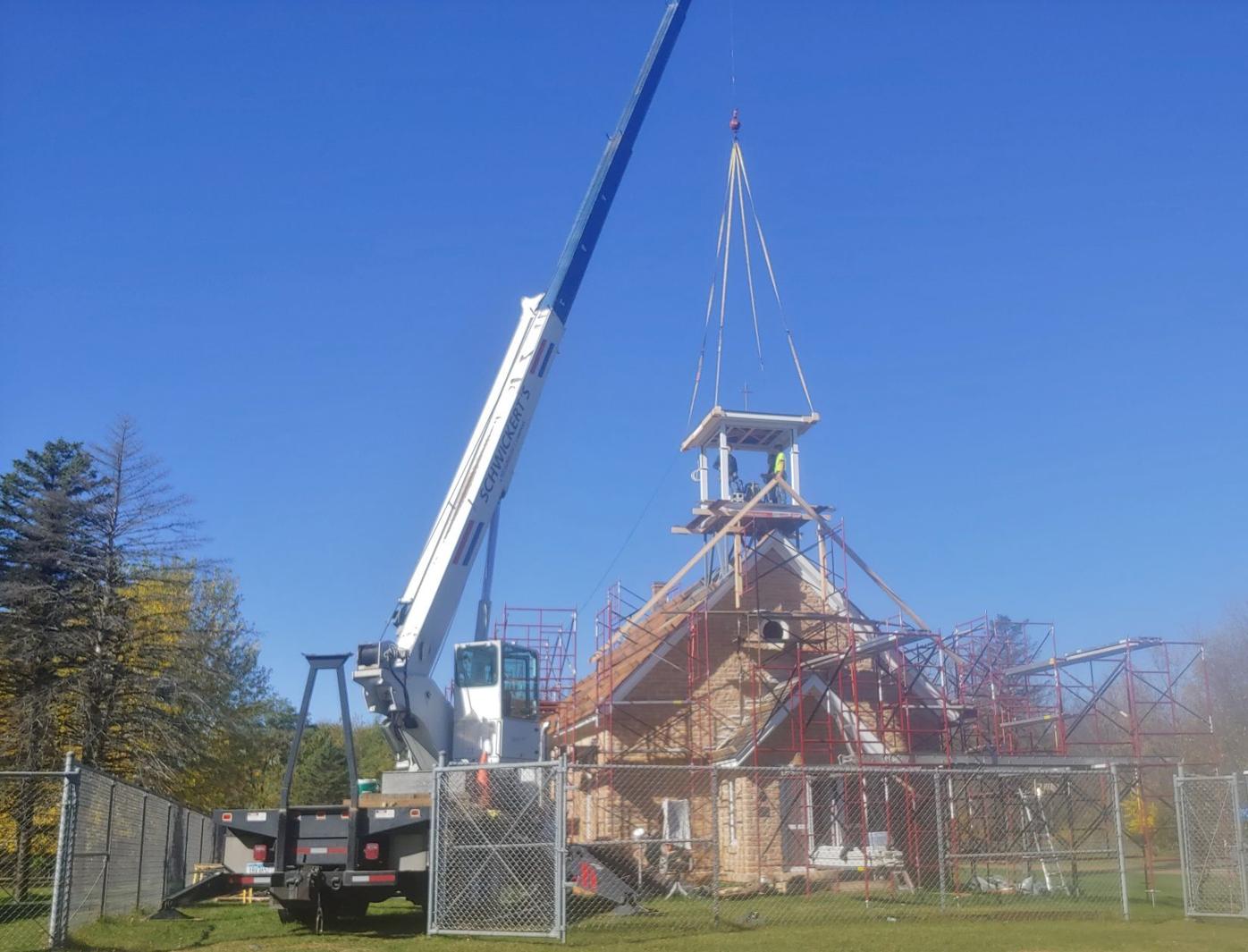 The Ottawa Stone Church celebrates its 161st year with a restored bell tower. After construction is complete, the church will soon be open to the public. (Carson Hughes/Southernminn.com) 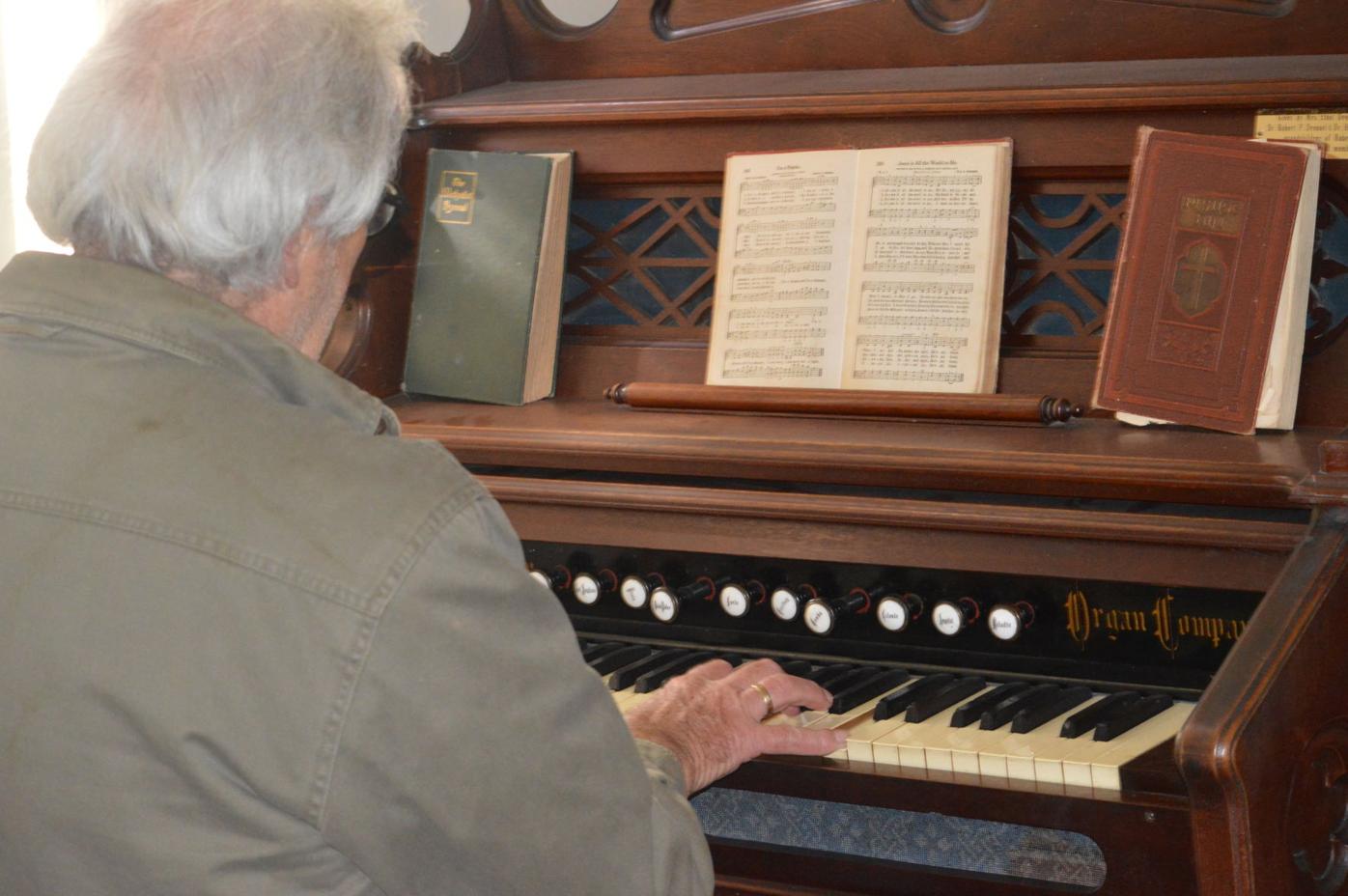 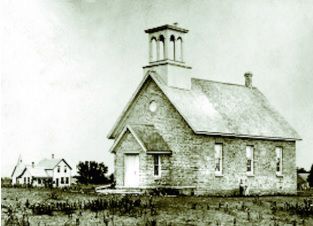 The Ottawa Church as it looked when it was built back in 1859. The church originally had a bell tower on top, but the flat top led the belfry to take on water damage. It was replaced with a steeple around the turn of the century. (Carson Hughes/Southernminn.com) 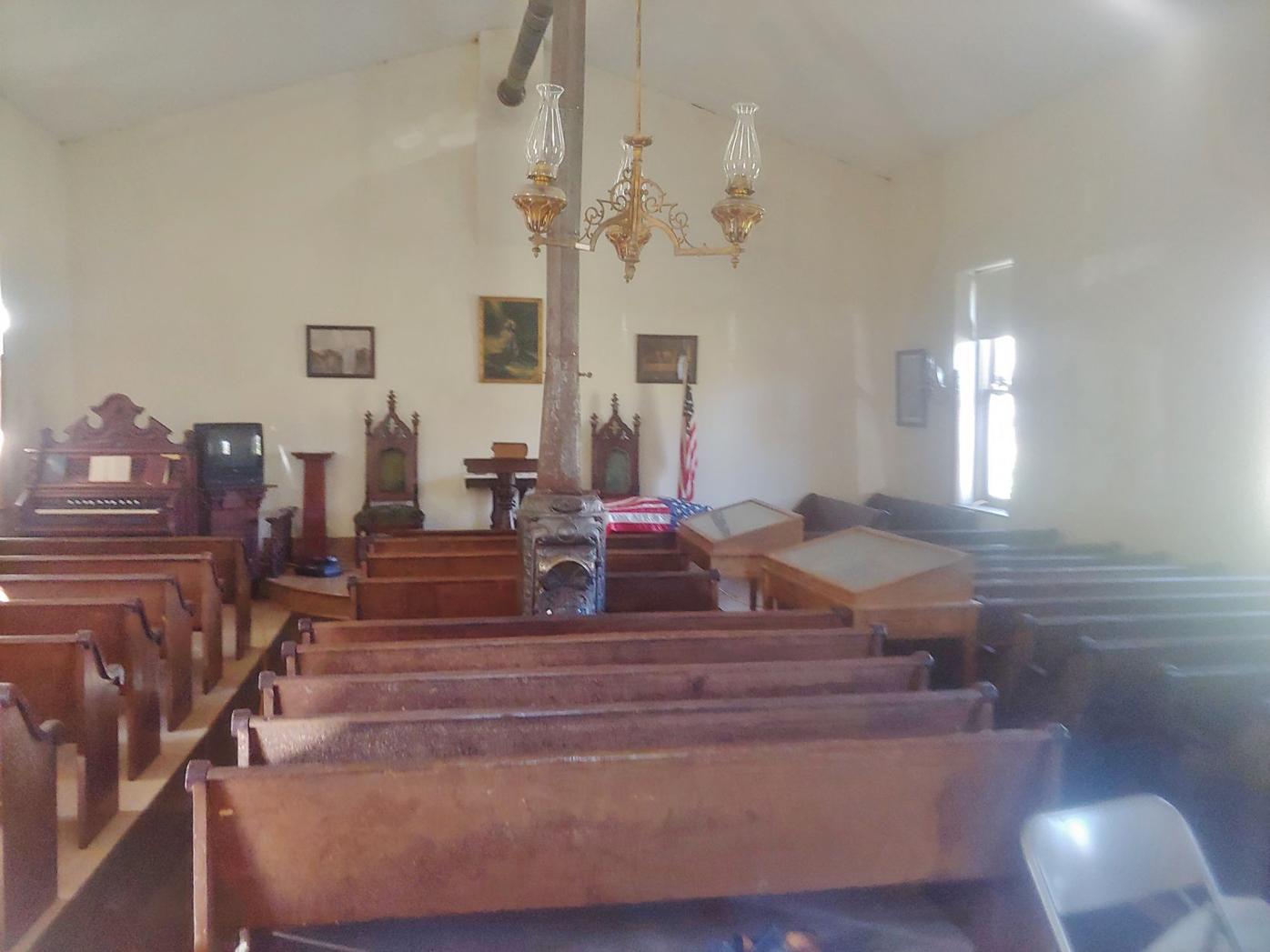 The one-room Ottawa Church features pews from 1859, a wood stove in the center for heating, a pump organ and a chandelier. (Carson Hughes/Southernminn.com) 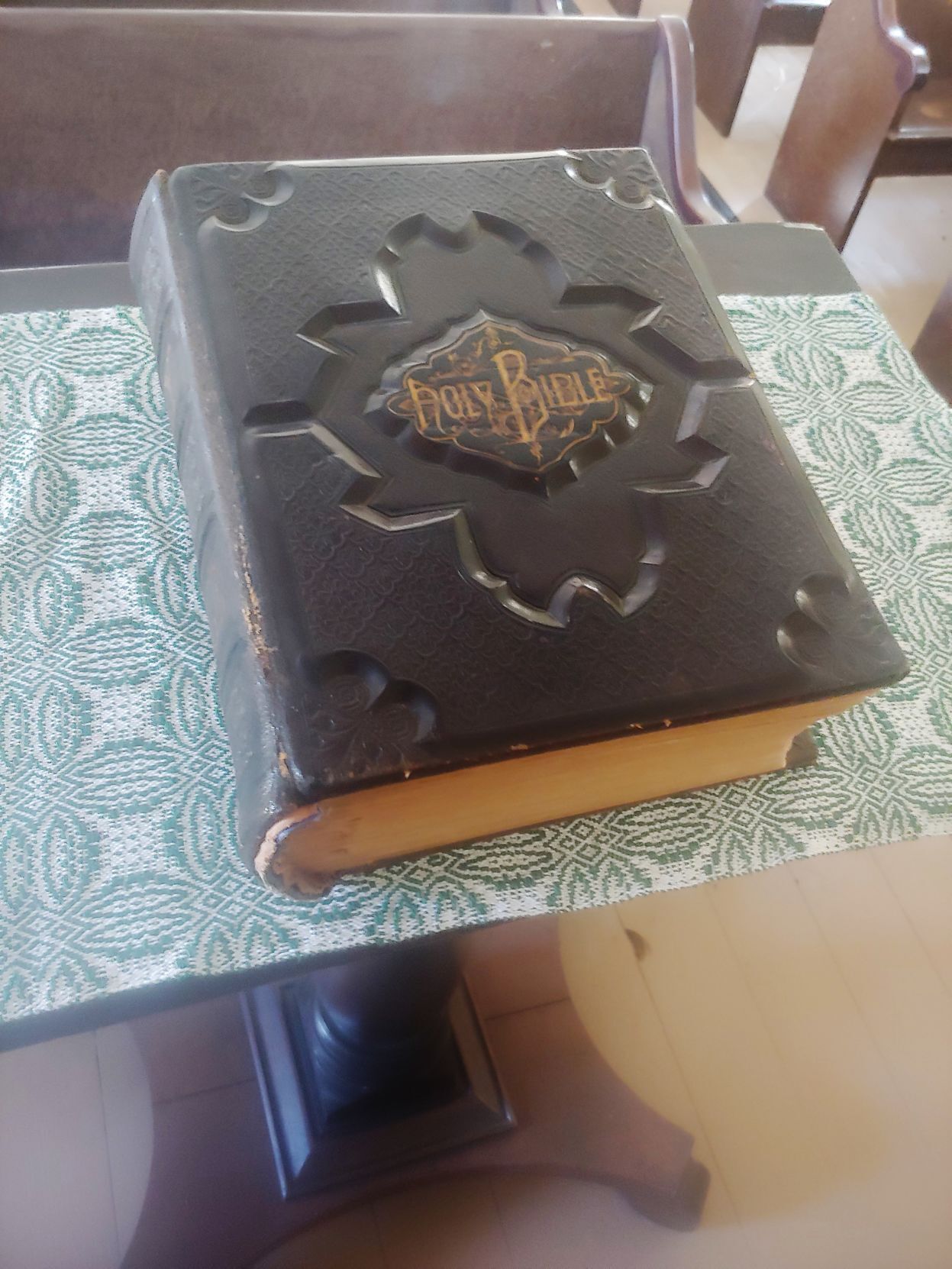 A bible dating back to 1884 still remains at the Ottawa Church pulpit. (Carson Hughes/Southernminn.com)

The historic Ottawa Methodist Church stands as one of the three oldest Methodist churches in the state of Minnesota and turns 161 years old this year. With recent renovations and the construction of a new bell tower, the Le Sueur County Historical Society is hoping the church will last 160 more.

On Monday, Oct. 12, the Le Sueur County Historical Society and Goodrich Construction completed a construction project five years in the making: the replacement of the Ottawa Church steeple with a new bell tower.

“It’s such a relief to know we’re finally coming to the end of this project,” said Dean Pettis, vice president of the Le Sueur County Historical Society.

The completion of the bell tower, as well as a new roof on the church, offers stability to a building that has been in jeopardy for the past five years. The structure of the Ottawa Methodist Church, located in Ottawa Township in Le Sueur County, was found to be unstable when Goodrich Construction found that the steeple was leaning 19 inches to the west and 11 inches to the south.

To stabilize the building, the Historical Society removed the steeple and belfry from the building. But at the time, the Le Sueur County Historical Society couldn’t afford the costly repairs, which added up to $176,000. The restoration had to wait years and the belfry and steeple sat on the ground in the church yard.

All the while, the Ottawa Stone Church was closed off to the public. No Sunday services, no weddings, no funerals, baptisms and no indoor fall festivals.

“It came in around the turn of the century, around 1900,” said Pettis. “I’m not sure exactly what time, but that’s what we estimate. Because it was flat, it took in a lot of moisture and started to deteriorate so they modernized and put the steeple up.”

The new bell tower was lifted by crane in several parts. The first part was a white belfry made with tubular steel. It was laid onto base built into the roof by Goodrich Construction. Then came the bell, which dates back to the when the church was first constructed in the 1860’s. Despite its age, the bell still rang as it was lifted to the tower. To cap it all off was pointed roof to the bell tower with a cross on top. The pointed cap will prevent the bell tower from taking in moisture, like the former one, and it came with cables to ground the tower in case it was struck by lighting.

The Ottawa Stone Church has received several other renovations as well. Before installing the bell tower, Goodrich completed a new roof and placed new wood trusses in the back of the church to carry the support of the new roof rather than the old structure. They also set in place a steel frame to carry the belfry. All that is left is replacing the church windows.

Once construction is complete, one of Ottawa’s most significant historical landmarks will be open to the public again. The church has long been a staple of the community. Pettis, who grew up in Ottawa, said the restoration holds a special place in his heart since his family were regular churchgoers. His grandmother is buried there and his mother taught Sunday School before it closed in 1950.

Back when the church was first established in 1859, the one-room church was in too small a community to carry a large congregation, so the church recruited pastors from surrounding areas including Le Sueur and Le Center to lead the congregation part-time.

The church remained operational for nearly 100 years until 1950. During that time, the church originated Ladies Aid, a group that held social events and fundraisers to pay the pastor and finance church activities.

After the closure, the church eventually fell into disrepair. The building was only used for weddings and funerals and maintenance work declined, allowing the brush and vines to overgrow.

“When I was a kid, it was surrounded with trees,” said Pettis. “You couldn’t see the structure itself. It was just a steeple sticking out of a cluster of trees.”

In the winter of 1967-1968, local residents formed the Ottawa Restoration Committee after learning that the church was one of the oldest in the region. Dedicated to preserving the history of the church, the group raised money to restore and re-open the church on Sept. 22, 1968. Since then, the Le Sueur County Historical Society has preserved the building and it’s been placed on the National Registry of Historic Places.

Many of the original historical features of the Ottawa Stone Church remain inside the building. The nave still holds the same pews from 1859 and the room is heated with a wood stove that rests in the center. At the pulpit, visitors can see a bible from 1884 which was read at the church. The room also contains a pump organ with foot pedals which were used to play music. At one point, the Ottawa Church held artifacts, but those were relocated under prior Historical Society leadership and they have yet to be found.

For decades, visitors could come to the building to witness its history and even rent it for weddings, funerals and baptisms. The local chapter of the historical society also held worship services and would use the site for its fall festival.

“We always had it open from Memorial Day to the end of August and September and then we had a fall festival on the first Sunday after Labor Day.,” said Dick Peterson, President of the Ottawa Chapter of the Historical Society. “Then we would have a service here and we would get various ministers and volunteers that were able to play the pump organ and we would have a sing-a-long with the people that showed up. That’s always been a tradition.”

That came to an end in the early 2010’s when the church was closed to the public as it underwent restoration efforts. In 2011, the church’s entire mortar and stone structure had to be replaced to fix the cracking structure.

Other structural issues, such as the roof, wouldn’t be fixed until now. The roof had an array of problems. The east side of the tower was supported by post bearings on the masonry wall above the entry doors were intact, but not anchored to the masonry wall. Wood beams on the west side of the tower were defected and down. Beams on the north side showed tension, while beams on the south side show significant deterioration due to rot and compression.

Around $180,000 was raised to restore the church by the Le Sueur County Historical Society with the help of community members and the Carl and Verna Schmidt Foundation. The Schmidt Foundation, which funds grants for historic restorations along with other community oriented projects from libraries to children’s hospitals, agreed to match $2 for every dollar the Le Sueur County Historical Society raised, up to $120,000. With the help of community contributions and Unimin, the historical society was able to raise $60,000 and pay off the $176,000 needed for repairs.

“Now that we can get back into it, we’re really looking forward to having it open on Sundays through the summer and then have that fall church service and our picnic,” said Peterson.