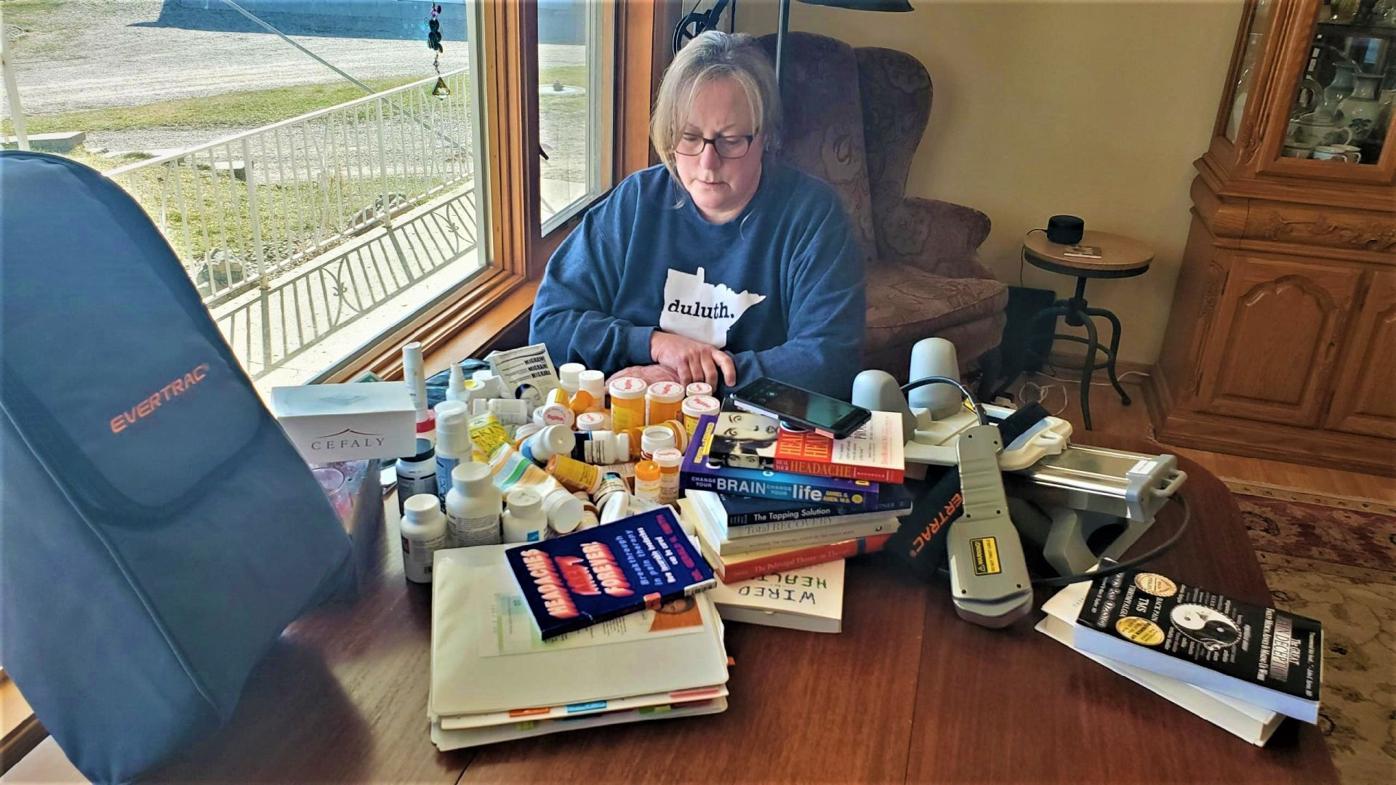 Due to a combination of post-surgery drugs and doctors that didn’t listen, Le Center resident Robyn Menk has lived with a constant, unceasing headache for five years. The headache still remains, but with the help of genetic testing, Menk has found ways to avoid the pharmacological reactions that triggered the headache. (Photo submitted by Robyn Menk)

Robyn Menk, right, with her family ready to sing Christmas carols at Benedictine. These activities are some of the only relief Menk gets from constant headaches induced by medication. (Photo courtesy of Robyn Menk) 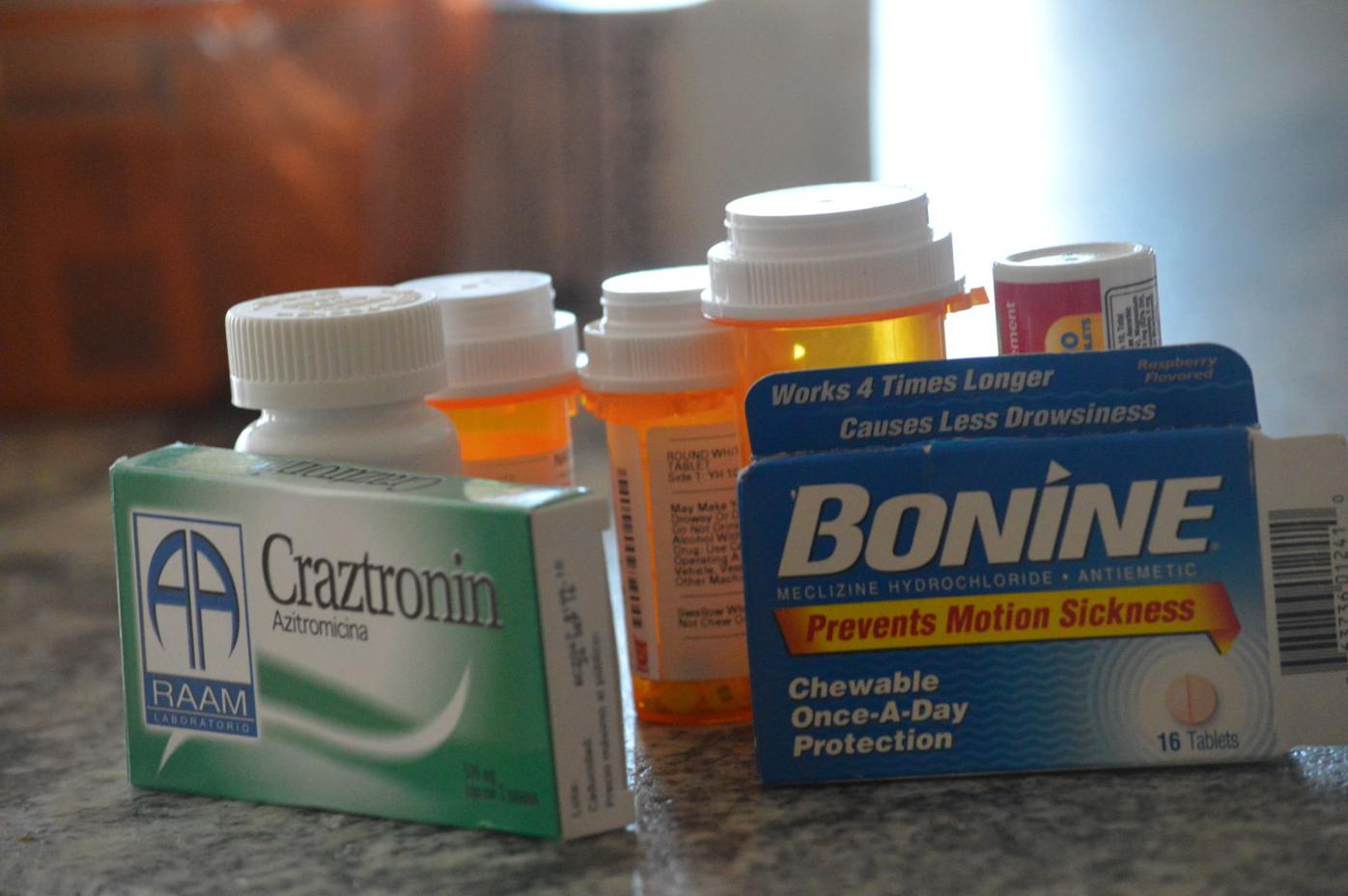 Finding the right medication can come down to trial and error, but pharmacogenetic testing may make guessing a thing of the past. (Carson Hughes/southernminn.com)

Five years ago, Le Center resident Robyn Menk needed her eyes corrected. It seemed like a simple task, but it would lead to the discovery of a much bigger problem.

Before her 15-minute surgery, Menk never had headaches, rarely took medication and lived a relatively normal life. All that would change after she suffered several akathisic reactions, triggered by medication prescribed by her doctors.

Now, Menk sees new hope, as she is using medication that works for her with the help of a DNA test that told her what her body can process and what it can’t.

In 2015, glasses were no longer helping Menk with her vision, so she made the decision to have her cataracts removed. But after having her first eye corrected, she sat in the post-op room for hours, unable to talk, unable to move, troubled by a feeling that she had never felt before.

“I started feeling bizarre, I had never felt that way in my life,” said Menk, a mother and former music teacher. “Along with this strange feeling that was horrible, I started getting a horrible skull crushing headache.”

The mysterious headache was gone the next morning, and Menk thought it may have been because of the IV drugs she received after the surgery. She’s had problems with adverse reactions to drugs in the past, and she knew her father shared the same puzzling condition. So when she went back for surgery a month later, Menk told the doctor about her reaction. But the doctor rebuffed her concerns.

“He didn’t even look up at me,” said Menk. “He continued to put the medication into the syringe and he said ‘People just don’t have trouble with these drugs.’ And he came over and gave them to me again.”

Back in the post-op room, the strange feeling and the headache was back, but this time, it was 10 times worse, she said, like a vice grip pressing against her temples. Making the pain even worse, Menk was later told by her surgeon that she didn’t even need the IV drugs and that they could have been substituted with others. Menk remembered the same doctor that gave her the drugs commented “We have a real lightweight here.”

“I wake up with it. I go to bed with it. It never remits,” said Menk. “Yesterday, I would say it’s only about a four or a five, and that’s a good day. Today, I woke up and it’s a seven, and I can’t ever identify any cause or effect … When I wake up, I’m at the mercy of whatever is going on inside my body that has this pain continue.”

In the next few weeks after surgery, Menk went to her general practitioner seeking a treatment for her headache and was sent to the ER. Believing that she had a migraine, Menk was given a cocktail of three anti-nausea medications. Despite her suspicions that drugs were behind her headache, Menk was reassured that it would help.

“As soon as that liquid started going into my body through the IV, it happened all over again,” said Menk. “This feeling, like there’s millions of bugs under your skin and all of them are trying to get out at once.”

Menk later learned that these reactions were caused by akathisia, a rare disorder that can be triggered by medication which can cause an uncontrollable sense of restlessness. Her symptoms resulted from her liver unable to process certain medications. In this case, Benadryl was a common element causing akathisia reactions in just three weeks.

Menk’s headache, which is classified as a New Daily Persistent Headache (NDPH), continues to be disabling. She developed tinnitus in her left ear, which not only has cost Menk part of her hearing, but also her job as a music teacher. The only thing that helps Menk tolerate the pain is distraction — things like caroling with her family during the holidays.

But distraction alone cannot counteract a problem that has seemed impossible to solve.

But Menk has found a way to prevent any future akathisia reactions, a form of DNA testing called pharmacogenetic testing. This form of genetic testing uses a patient’s blood or saliva to find genetic factors that correspond with how the patient may process medication. Using this information, health care providers narrow down medications that might be right for their patients.

“There are a number of different genetic factors that actually cause differences across people in the degree to which we can break down or metabolize certain drugs,” said Dr. Jeffrey Bishop, an associate professor with University of Minnesota’s Department of Experimental and Clinical Pharmacology. “People just respond differently to medication sometimes, even if they’re being used to treat the same thing. And I think we’re realizing that genetics is one factor that can account for this.”

For Menk, a genetic test from the Mayo Clinic made a world of difference in her health care treatment. Her results gave her a list of categories of medications with information on whether or not her body could metabolize them. Not only has the information allowed her to avoid medication that would trigger her akathisia, it has given her proof of her condition that she can demonstrate to disbelieving doctors.

“Now, because they have a concrete reason, they don’t disregard me,” said Menk. “It completely allows you to know which drugs you can take. It tells you anything from high blood pressure medications to cancer medications to anesthesia medication. It breaks medication down into categories and gives you the information that you need if you’ll be able to metabolize those.”

With the information, Menk has found medications that work for her and has avoided drugs that trigger her akathisia. She’s working with a neurologist in Rochester to search for a solution to her permanent headache, but for now, her head pains serve as a reminder of just how differently the body can react to medication.

Beyond physical ailments, genetic testing is also helping patients with mental illness find the antidepressants or antipsychotics that work for them. John Kline, of New Prague, has long lived with depression, but none of the antidepressants that psychiatrists prescribed seemed to work, and he slipped further and further into depression. His depression became so severe that he could hardly get out of bed.

The Klines were at the end of their rope and were considering electroshock therapy, when they learned of genetic testing. John’s wife, Barbara Droher-Kline, reached out to numerous doctors, but had trouble finding one that knew how to give a genetic test. On a whim, Droher-Kline contacted her family physician Heather Hamernick, who told them that she could prescribe a GeneSight test, developed by the Mayo Clinic.

When the results came in, the Klines discovered that the medication John was prescribed couldn’t be metabolized by his body. And because doctors kept upping the prescription, Kline’s symptoms worsened.

“The test results showed that he doesn’t metabolize common antidepressants, and they kept increasing them, so he became toxic over it,” Droher-Kline.

Since having the genetic test done, John was enrolled in an outpatient treatment program where he could develop skills to recover. While depression remains a daily struggle, John has started taking his life back.

“He’s driving a truck three days a week. It takes a lot to get your feet moving again when you’re that down and out and just cut yourself off,” said Droher-Kline. “It took a long time. He had to go to outpatient treatment, just to get his brain and his life restarted again, because he had lost so much. That’s why I’m so passionate about this.”

Since the experience, Droher-Kline has tried to get the word out about genetic testing. While the first publicly available pharmacogenetic test dates back to 2005, awareness of these tests is only just starting to surge. Many doctors still do not know how to best utilize these tests in patient care and many insurers don’t cover them.

To make pharmacogenetic tests more accessible, the University of Minnesota has launched a Provost Grand Challenge Research Initiative to facilitate research, education and clinical use of these tests throughout the state of Minnesota. The initiative is a collaboration between 75 people at the University of Minnesota and health care institutions across the state. The university is also developing a resource that would allow individuals to have their test results stored and made available to different doctors across the health care systems.

Bishop’s hope is that pharmacogenetic testing could become more standard and used earlier in the health care process to prevent patients and providers from engaging in a trial and error process before finding the right medication.

“A lot of times tests are ordered after individuals have tried a number of different medications and maybe not had a good experience with them or they didn’t work very well,” said Bishop. “In that context, a test might provide genetic information on why that was the case …”

However, Bishop sees potential for pharmacogenetic testing to play a greater role in prescribing medication, a new standard that could reach patients like Menk and Kline before they have to try out numerous medications.

“… but where I hope to have more information is to have the tests done earlier in treatment,” Bishop said, “so that we can avoid the trial and error odyssey that many individuals go on.”