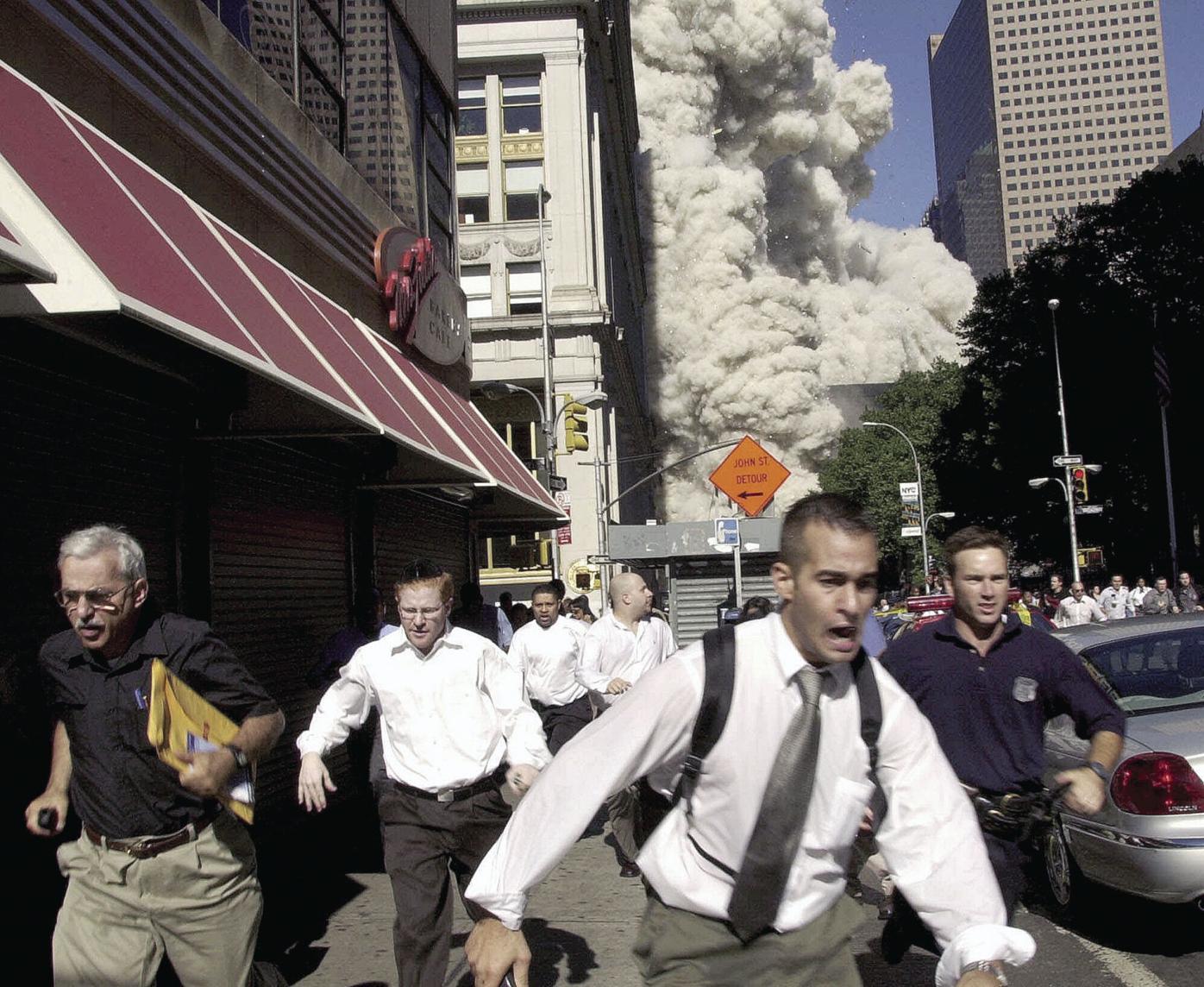 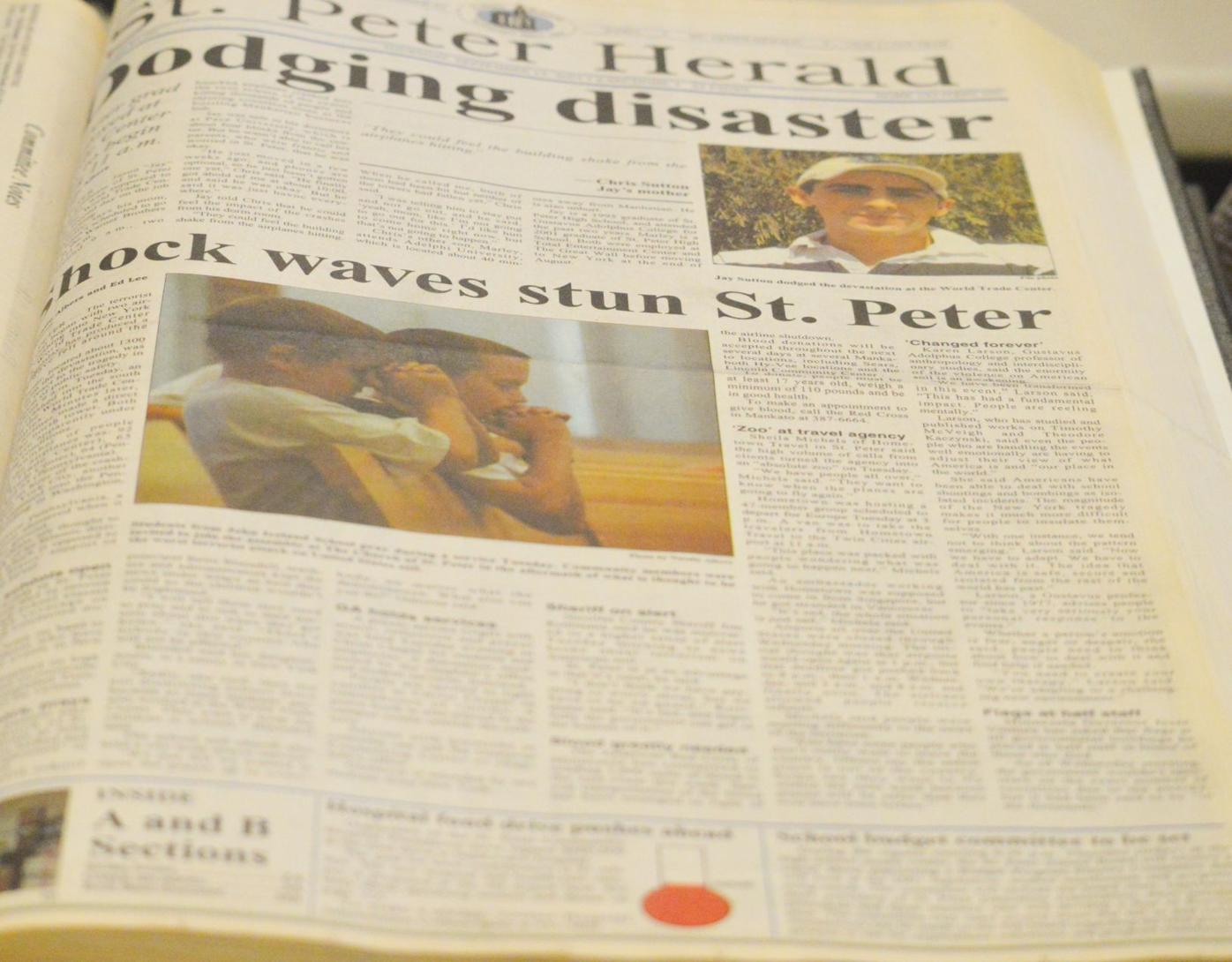 The Sept. 13 2001 edition of the St. Peter Herald documents the community response to the September 11th terror attacks. (Carson Hughes/southernminn.com) 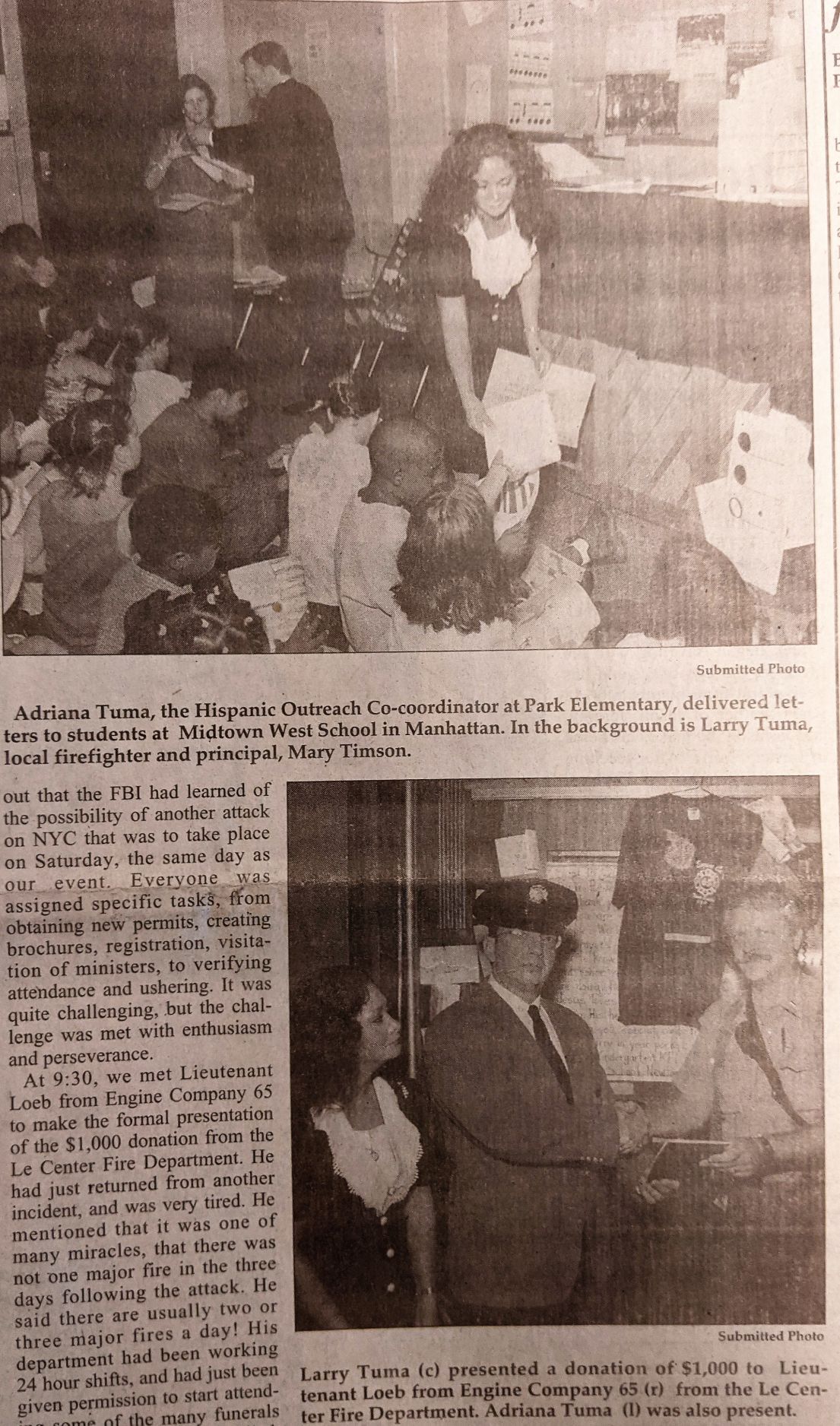 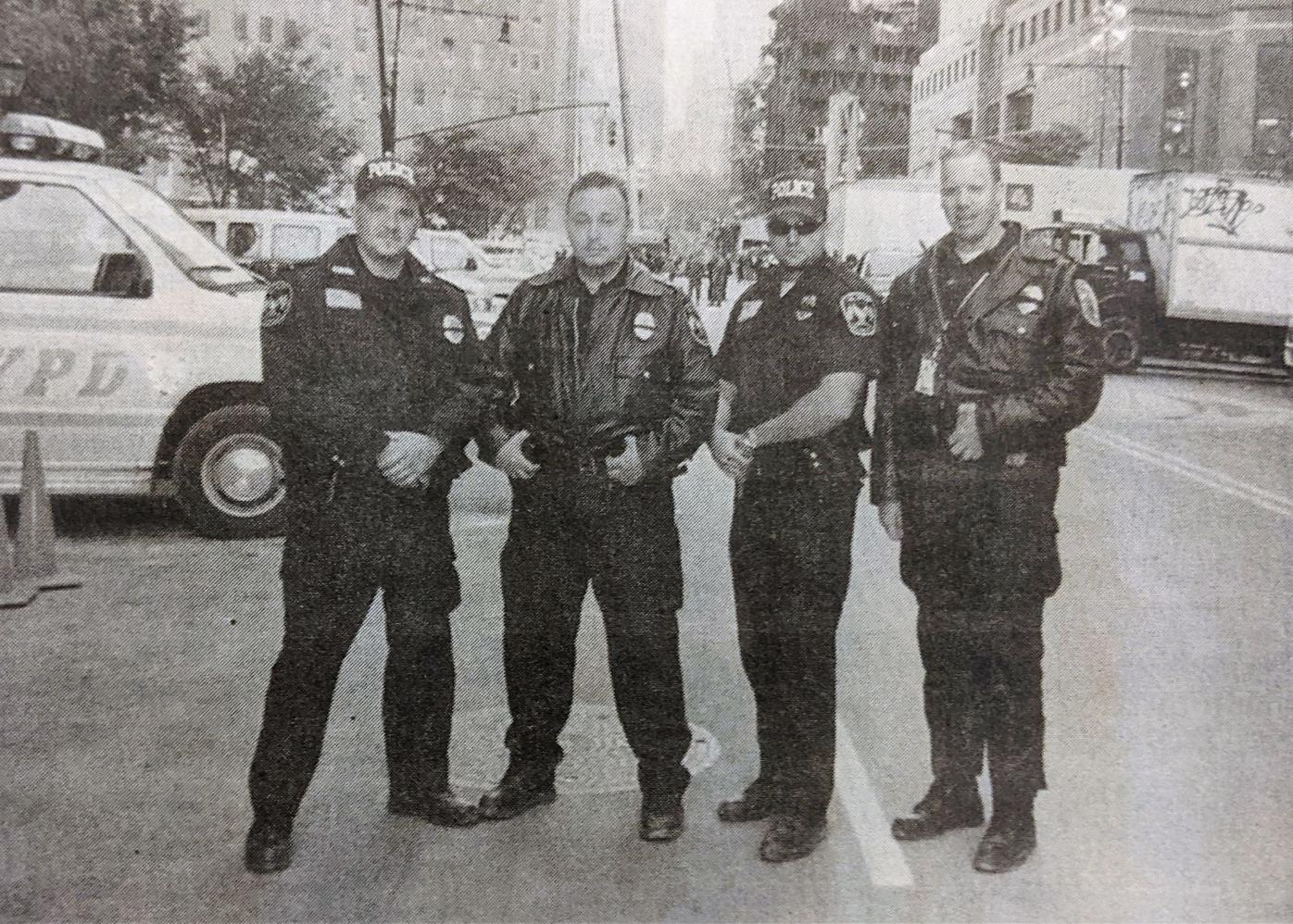 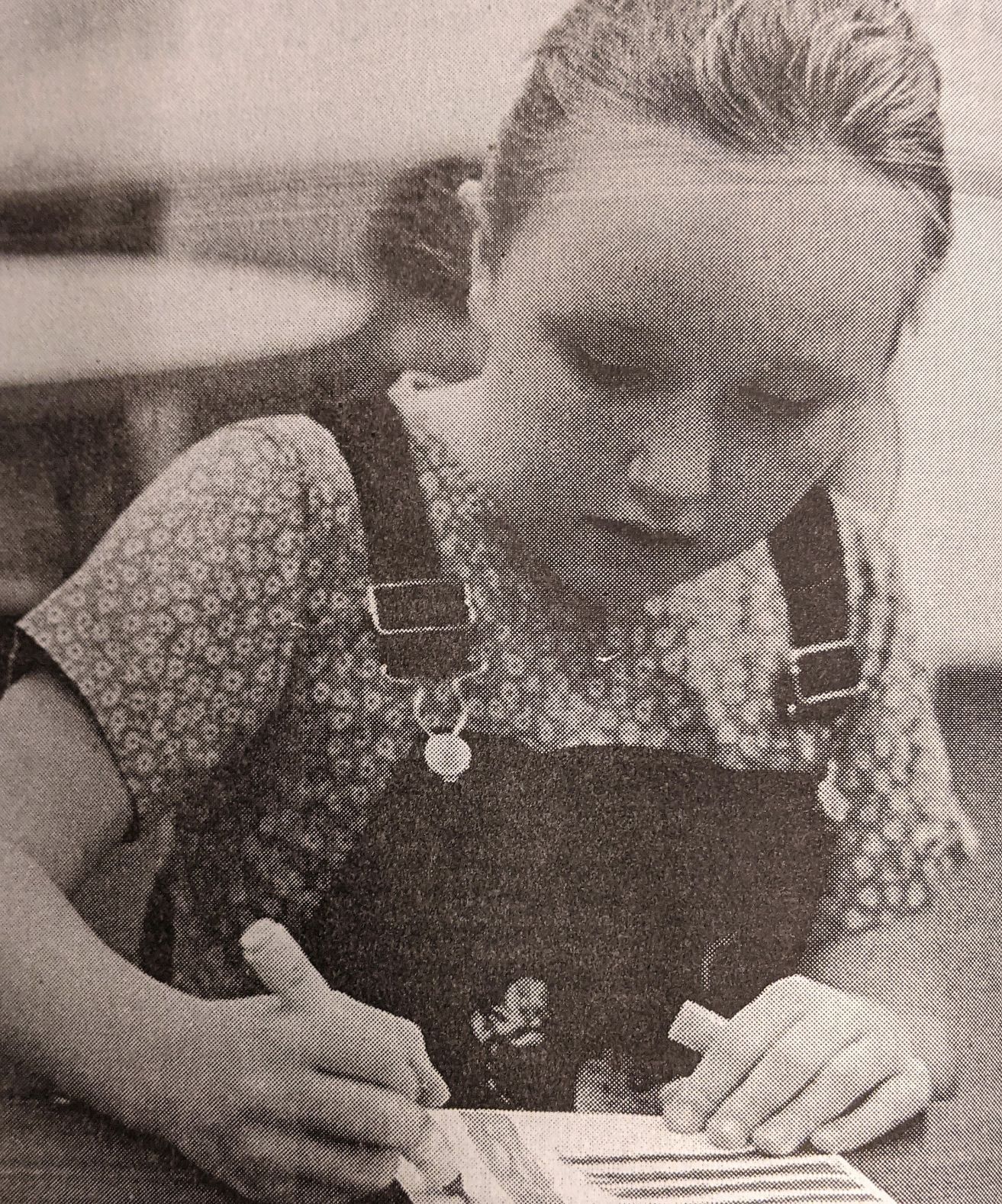 Ali Jacobson, a Cleveland student at the time, colors the Twin Towers and an American Flag on the card she sent to the victims of the Sept. 11, 2001 attack on America. The front said “We Love America.” (Le Center Leader archives)

Then Le Center residents Larry and Adriana Tuma were driving over the bridge to Chaska for a doctor’s appointment when they heard the news over the radio. A Boeing 767 on flight to Los Angeles was hijacked by terrorists and rammed into the North Tower of the World Trade Center. Just 17 minutes later, hijackers crashed a second flight into the South Tower.

In Washington D.C., 189 people were killed in a third plane crash that breached the western wall of the Pentagon. A fourth plane crashed in a field in Stonycreek Township, Pennsylvania after passengers sacrificed their lives to subdue the hijackers en route to the United States Capitol building.

The buildings fell apart. Between the passengers on the planes, the dead near the Pentagon and the thousands killed in the collapse of the Twin Towers, 2,996 people were killed on that infamous morning.

The Tumas pulled to the side of the road as the world halted. As people everywhere watched fire and smoke billow from the Twin Towers, the Tumas dipped their heads in prayer.

Confusion, fear and anger permeated through the American consciousness, but so did a desire for unity and a need to inspire hope. As they sat on the side of the road with their hands clasped and news coverage blaring from the stereo, the Tumas felt a calling to help.

In the days after the attacks, the couple reached out to the Le Sueur and Le Center school districts, hoping to deliver student letters to the children of New York City. First and second graders of Park and Le Center elementaries filled up a bag’s worth of letters, and the Tumas set off on Sept. 20 to JFK Airport in NYC.

With support from the Le Center Fire Department, Le Sueur United Methodist Church, St. Paul’s Evangelical Church and the Family Federation for World Peace and Unification (FFWPU), they arrived at Midtown West School in Manhattan and handed out the local letters personally.

“I remember the faces of the children in the New York City,” said Adriana Tuma. “There was so much hope from the letters, and they were smiling. It meant so much that we can pull at someone’s heart that is suffering.”

In the classroom, they shared a message of unity, encouraging students to practice love for their neighbors regardless of religion, race or nationality. They also spread that message at the Interfaith Prayer Breakfast and Rally held in New York in the wake of the attacks.

“We belong to the unification movement, which was founded by a Reverend from Korea and their message was to break down the barriers between religions,” said Tuma. “We made contact with numerous ministers in New York City for an Interfaith Prayer Breakfast .We talked about starting to act more as a family, being more inclusive than exclusive. We had approached the children knowing they were the future.”

As ambassadors of the Le Sueur and Le Center area, the Tumas also met with a Lieutenant from Engine Company 65 to deliver a $1,000 donation from the Le Center Fire Department. The department had been working 24 hours a day since the attack and had lost one member.

The final stop of the trip was Ground Zero. A little more than a week after the attack, members of different faiths came to the site where the Twin Towers once stood and prayed.

“It was hopeful because of the message that we were delivering and the response that we received,” said Larry Tuma. “It was a melting pot of all different races, nationalities and religions. They were very receptive to the message of forgiveness.”

It wasn’t just the Tuma’s who sought to help. Community members throughout the region contributed what they could to bring people together after the devastation.

At Cleveland Elementary, third and fourth graders wrote sympathy cards to the schools of two elementary students and two teachers that were killed aboard the plane that crashed into the Pentagon. The cards allowed children to process their grief and help Washington DC families feel better.

In a 2001 edition of the Le Center Leader, then Cleveland third grader Ali Jacobson wrote “We would like to tell you even if we don’t know you, we can still be friends. We are sure you will still be okay.” she also shared a story about how she handled the death of their dog, writing “My mom told me maybe I’m sad and I’m crying because I’m happy for my dog to be in heaven. She will have a happier, better life. I hope you figure out that you feel the same way.”

With the help of community donations totaling $3,000, the officers spent some of their own vacation days at Ground Zero collecting evidence. Everything from plane parts to personal belongings to body parts were located and logged by the Crime Scene Unit (CSU) and Evidence Collection Team. (ECT)

Others responded by sending postcards, donating to the Salvation Army, dropping off donations to the Red Cross and giving blood. By Sept 26, the Mankato Red Cross received 765 units of blood in the wake of the attacks.

Ed Lee, then editor of the St. Peter Herald recalled feeling disbelief when he heard the news. At first, Lee assumed it was an accident like the 1945 Empire State Building plane crash. It wasn’t until the second plane hit the South Tower that the idea of a terrorist attack on U.S. soil became real.

The next paper was to be published in just two days, and the whole front page was cleared to document local reactions to the attacks. Pulling from their experience covering the 1998 tornado, the newsroom acted fast to connect St. Peter to the events in New York City.

“Almost immediately we started brainstorming ideas, so we just made a list of everybody we could talk to,” said Lee. “We talked with a college student, [Jay] Sutton, in New York and learned pretty quickly he could see the smoke from his window, so we wanted to talk to him. We wanted to talk to somebody from Gustavus who knew something about terrorism and psychology and what this means.”

In St. Peter, the Church of St. Peter and Gustavus Adolphus College held citywide prayer services. Flags on all governmental buildings were set to half mast on the orders of Governor Jesse Ventura. Local schools grappled with how to walk students through this tragic event.

At high schools in St. Peter, Le Sueur, Le Center and Cleveland, students watched the news coverage of the attacks and teachers opened up their classes to discuss what happened. Counselors also aided students in processing their reactions.

Elementary schools grappled with how to address the death and destruction without frightening young ears. At John Ireland School in St. Peter, the school went into increased lockdown, while teachers and administrators kept the news under wraps as best they could. At Le Center Elementary, students did not witness the news coverage, but were read a statement about what was happening before they went home. The school also asked parents to process the events with their children.

“When you go home today you are going to be hearing about a very sad thing that has happened to our country,” read the statement. “Some planes have crashed into the World Trade Center and the Pentagon. Many people have been injured or have died … Please remember that we are safe here in Le Center. There are many people here to talk to you about this. If you come to school tomorrow and need to talk with someone please tell your teacher and he or she will be sure you have someone to talk with.”

Adriana Tuma, then a Hispanic Outreach Coordinator for the Le Sueur school district recalled that many students were rattled by the attacks.

Communities were also on high alert, and local governments and schools were prompted to think about how they could increase security at home.

“People were wondering about Minneapolis — ‘Is Minneapolis a target?’ We thought it was going to be hijacked airplanes everywhere,” said Lee. “That fear brought the nation together in ways that I have never seen in my lifetime — the nationalism and the national pride. Everyone was clinging to faith together.”

Fears of terrorism at home spiked on Sept. 20, 2001, when a caller claimed to the Le Sueur County Courthouse that there was a bomb in the building. Staff immediately evacuated the building, but after a full search by the Sheriff’s Office, nothing was found.

The incident led county commissioners to call a special meeting on Sept. 21 to have a caller ID system installed in the government building and Sheriff’s Office at no cost.

The world has changed dramatically since Sept. 11, 2001. Less than a month after the attack by Al Qaeda, the United States entered a 20-year war in Afghanistan after the Taliban refused to extradite Osama bin Laden, who directed the hijackers. America’s longest war, the conflict came to an end on Aug. 30 this year.

Security became a priority in travel, technology and communications. The Transportation Security Administration (TSA) changed the way we fly with full body scanners, new requirements to remove electronics and shoes before screening and mandatory checking of passengers’ photo IDs and tickets.

The FBI and NSA were granted new abilities to share data and eavesdrop on private communications while the Department of Homeland Security was established to combat terrorism, enforce border security, cyber security, and disaster prevention.

Though two decades have passed, the memory of the Sept. 11 terror has left an imprint on those old enough to remember. According to the Pew Research Center, 93% of Americans 30 and older remember exactly where they were on 9/11.

Community members all took lessons from the days, weeks and months that followed. Lee vowed to always remember the day like it was yesterday and found a renewed appreciation for the United States military.

“Since then, I’ve never missed a Memorial Day ceremony in the park,” said Lee. “Even in 2020, I was in the park. I won’t miss those programs.”

The Tumas found hope in the unity shared after the Sept. 11 attacks, but looking back, they expressed regret that the nation appeared to have forgotten that sense of togetherness.

“It’s like high noon, where there’s no shadows and people have forgotten about what happened,” said Larry Tuma. “The world is divided among people of different groups and races, and people thrive on the division. It’s like people forgot about what we experienced after being attacked.”