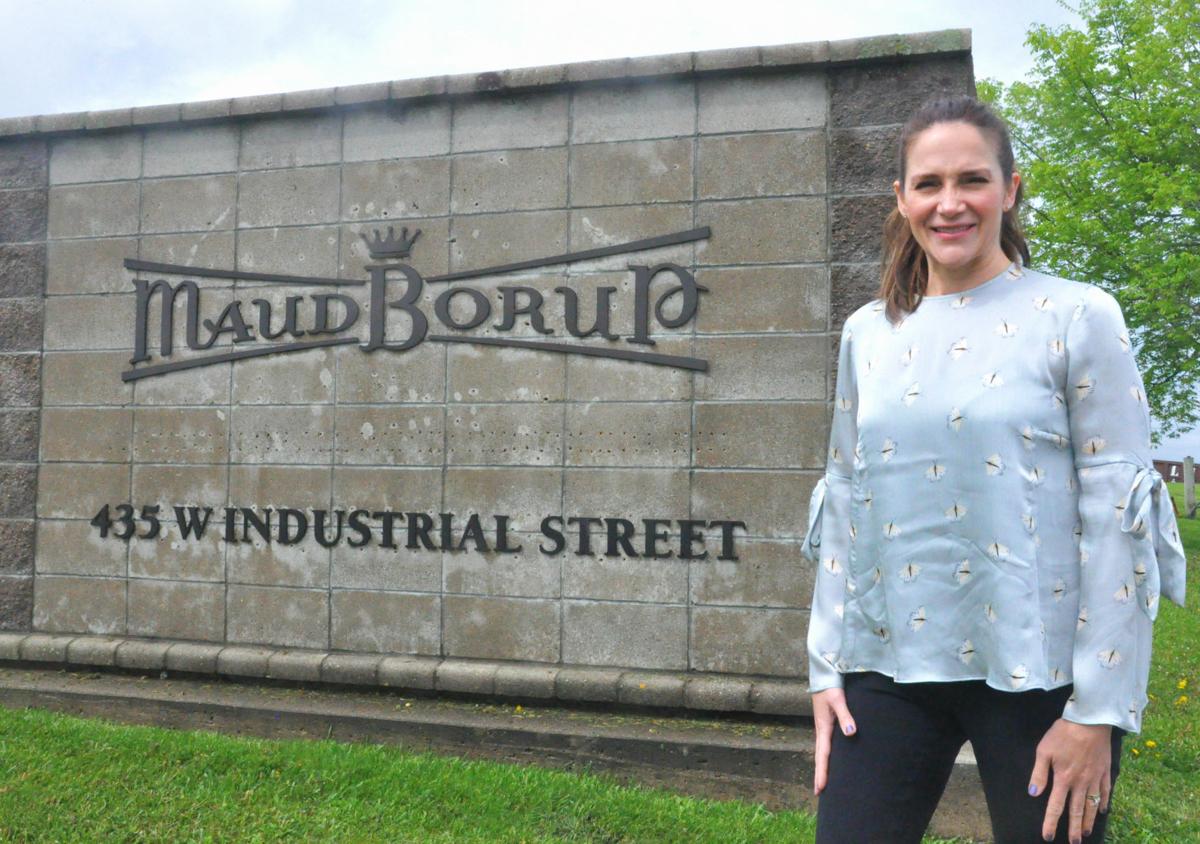 Christine Lantinen is the owner of Maud Borup food gifts and candy confections which has a packaging plant in Le Center. (Ashley Murtha/Le Sueur County News) 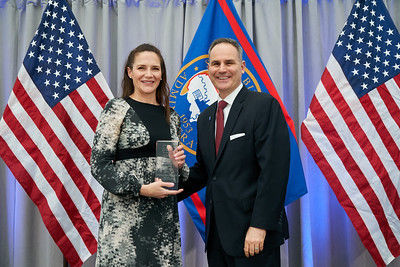 Christine Lantinen receives the Small Business Person of the Year award for Minnesota at the ceremony in Washington D.C. on May 6. (Submitted photo) 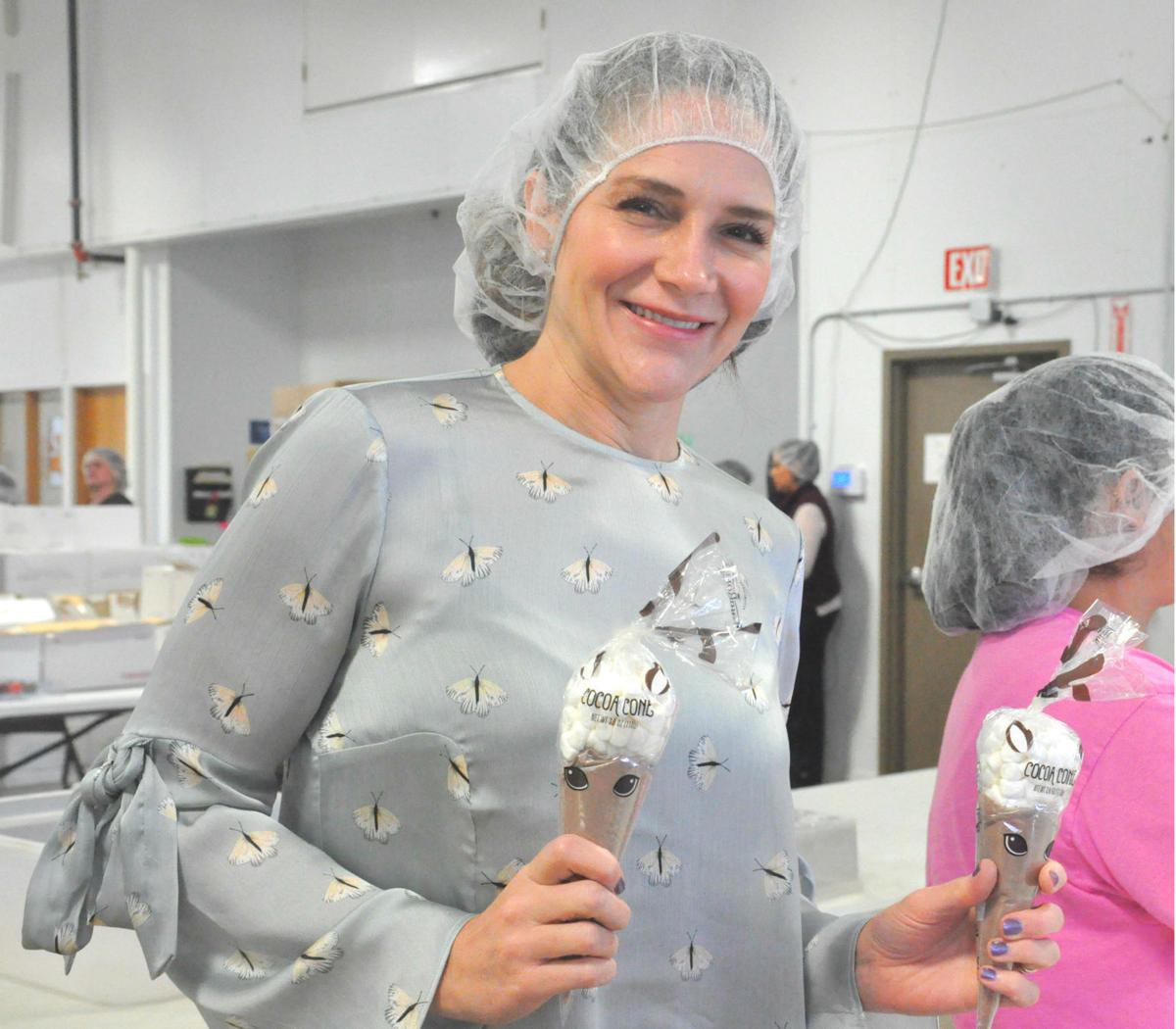 Christine Lantinen holds a couple of the company's hot coco cones. They are decorated like reindeer as the company is already preparing orders for this coming Christmas. (Ashley Murtha/Le Sueur County News)

Christine Lantinen is the owner of Maud Borup food gifts and candy confections which has a packaging plant in Le Center. (Ashley Murtha/Le Sueur County News)

Christine Lantinen receives the Small Business Person of the Year award for Minnesota at the ceremony in Washington D.C. on May 6. (Submitted photo)

Christine Lantinen holds a couple of the company's hot coco cones. They are decorated like reindeer as the company is already preparing orders for this coming Christmas. (Ashley Murtha/Le Sueur County News)

Christine Lantinen has taken her small business from a consumer company to a wholesale business, going from $100,000 in sales to millions in just one year, and now the Small Business Association (SBA) has recognized her for it by naming her Minnesota’s Small Business Person of the Year.

Lantinen grew up on a farm in rural Le Center.

“My dad put me to work and that’s where I learned my work ethic,” Lantinen said. “I’m never content with what we have. I always think we can do better.”

And that’s exactly what she shows in her food gift business. Lantinen owns Maud Borup Inc. and has owned it ever since 2005.

“I got let go from my other job at Bay Island on a Friday,” Lantinen said. “By Monday, I had called the owners (of Maud Borup) and made a deal with them and bought the company.”

At Bay Island, another food gift company, Lantinen had been a sales and marketing director and she found that she really liked the industry.

“I never had a vision to own my own candy company,” Lantinen said. “But I knew the merchandise.”

Lantinen said she had also known the previous owners before buying the company as they had come to Bay Island to pitch a product.

“They came and pitched a product and my company didn’t want to focus on them, but I loved them,” Lantinen said.

At first, Lantinen couldn’t get a loan for her new company from any bank. She eventually got a friend to put his farm up as collateral and, with the backing of the SBA, she eventually got a loan and paid back her friend in 10 months.

Maud Borup has always been a woman-owned company since it started in 1907 by a woman of the same name. And even today, 96 percent of the company’s workers are women, with women occupying most of the leadership roles.

“Maud Borup started this company before women could even vote, and since, it’s always been woman-owned,” Karen Edwards, the head of the company’s marketing and public relations department, said.

Borup started the company by selling candy out of a flower shop in St. Paul and it grew to several stores from there, but then Lantinen came in and saw that the stores were not as profitable, so she decided to close them and focus on wholesale. Now the company sells its food gifts to places like Walmart, Target and Aldi.

“She had a vision to grow the company and the way to do that was to switch to wholesale,” Edwards said.

Since that switch, the company has made millions of dollars in sales every year.

“The goal is to make it to $100 million in 10 years,” Lantinen said. “In order to keep growing you have to keep changing.”

And change is certainly something that Lantinen has brought to the company.

Besides that, Lantinen has also put a special emphasis on sustainability and eco-friendly practices. She also makes organic and even vitamin-filled candies like eco eggs and organic cotton candy.

“Today people want the indulgence of candy, but they also want organic and something that’s good for you,” Lantinen said. “So we have to invent sweets in a more modern way.”

Because of all of her success in the business and her background with the help of the SBA, the association decided to choose her as the Small Business Person of the Year for Minnesota.

Lantinen has also always been very aware of her hometown and when she was looking to put up a packaging plant, she kept coming back to Le Center until eventually she found an empty building, took over the bankruptcy of the previous owners and filled it with her company to give something back to the small town.

“They look at people who give back to the community,” Edwards said.

Lantinen said that receiving the award is “a huge honor and just propels me to keep going. And all the SBA wants is for me to just tell my story because it speaks volumes.”