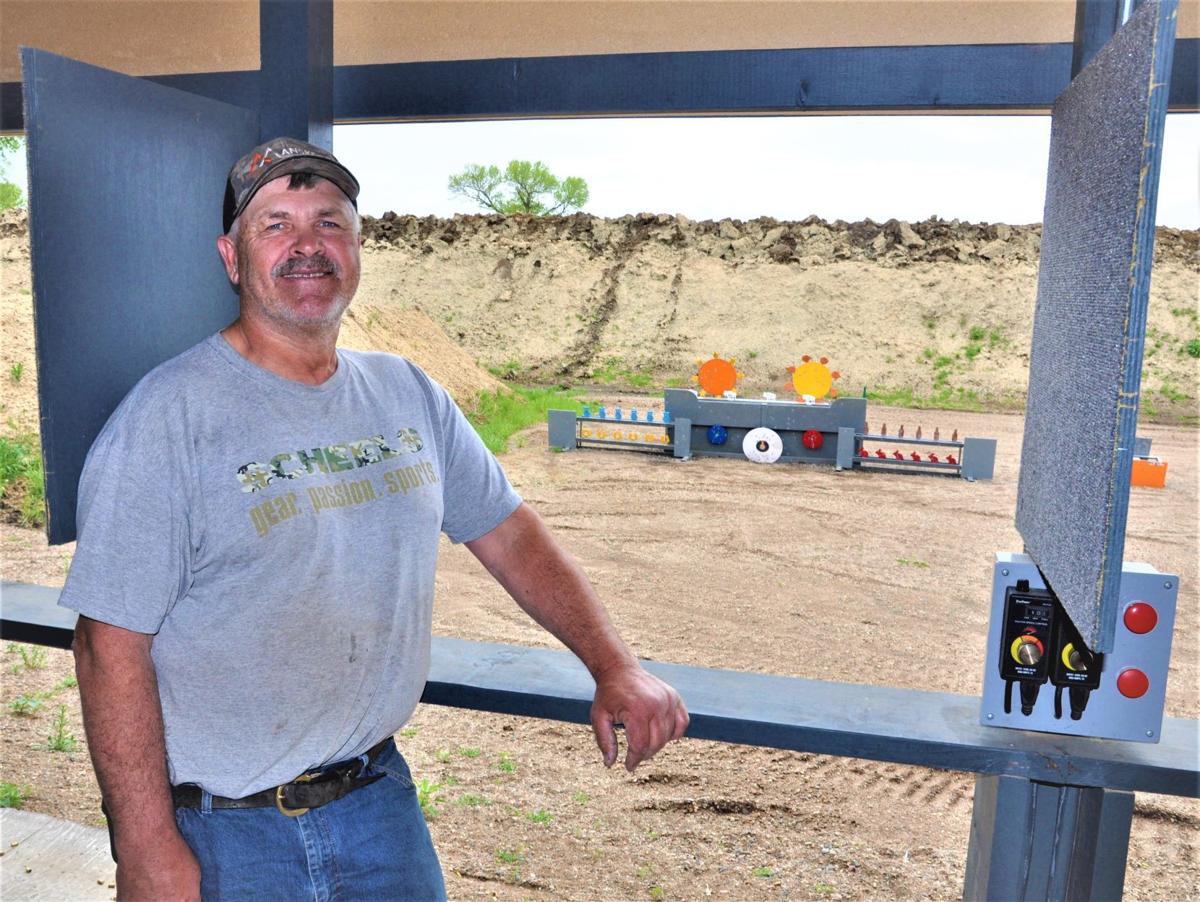 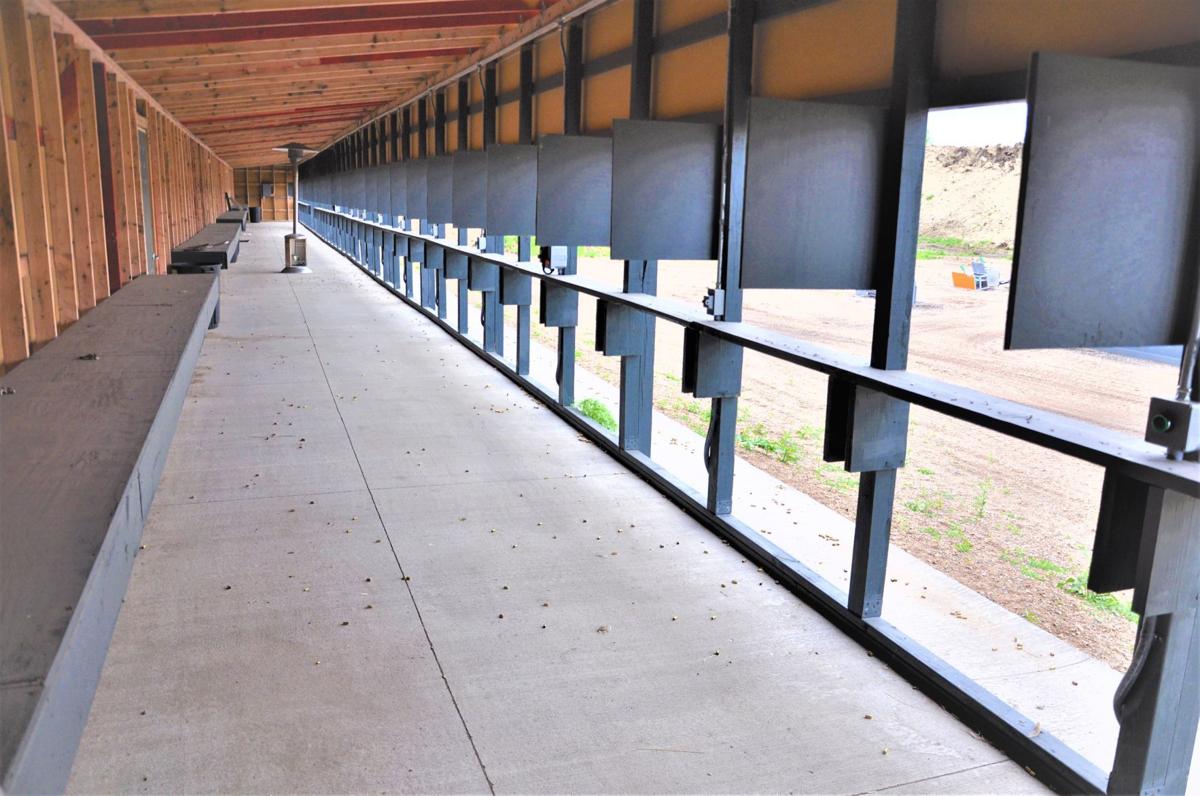 The new pistol shooting range at Caribou Gun Club is the longest in the United States at 165 feet with 23 stations. (Pat Beck/St. Peter Herald)

The new pistol shooting range at Caribou Gun Club is the longest in the United States at 165 feet with 23 stations. (Pat Beck/St. Peter Herald)

At a time when businesses are losing revenue because of the COVID-19 pandemic spreading around the world, Caribou Gun Club in Le Sueur is expanding.

The club opened a new $75,000 automated pistol shooting range May 1. Measured at 165 feet long, the covered building is open in the front for shooting.

“The guy that put it in said this is the biggest one he put in the whole United States,” Caribou owner Randy Voss said. “It’s a pretty nice deal. It’s all automated targets built out of Texas.”

Although the state rules limit it to 10 people now, Caribou has 32 lanes: nine paper and 23 Big Boy Automated Targets. It has two different sets of targets. One side they shoot at paper targets where they sight their pistols. The other side are a variety of 10 automated moving targets. When shot down, it stands back up.

Working on the project about a year, Voss said it has a nice safe high mound to block the bullets. Voss said he added the pistol range to get more people with hand guns interested in trying the club.

“My rifle range was getting busy, and I wanted to get my pistol people off the range,” Voss said. “I wanted to split them up.”

There are three separate memberships: one for the pistol range, one the rifle range and one the hunting range. Pistols are not available to be rented. Only 12-gauge shotguns can be rented.

Even though Caribou is expanding, that doesn’t mean business isn’t down. Since the pandemic started in March, Voss estimates that the club has lost $80,000 to $100,000 in revenue.

According to the state guidelines for social distancing, including a maximum of 10 people in groups, Voss said, “I can’t have my banquet hall open. It seats 350 people. All that stuff got canceled. I’ve already lost eight events, all corporate stuff, because we do food and banquets. So all we can really do is shoot sporting clays and trap, skeet and rifle and pistol range. And I watch how many people I put at the rifle range. I try to keep it 10 and under.”

When people come in to sign in to shoot, Voss said he gets everybody out of the pro shop right away.

“If I get busy, I put my sign up table outside and make one person come in and pay,” Voss said. “Some people pay by credit card or over the phone while they’re sitting in the parking lot. Like for sporting clays, a lot of them buy a blue card for a thousand shots at time, and they can just go out there.”

As for future events, Voss said, “We don’t know. Everything is at a standstill. I have a lot of stuff booked for the fall. My weddings don’t start till August. I have a Mud Girls Run (breast cancer charity fundraiser) Aug. 15, really my first thing I have out here. Everything is canceled from March 15 till now. Even this fall, ordering birds for my hunting preserve, I don’t know how many birds to order. Nobody knows what’s going to go on.”

Like many others, Voss said he has lost a lot of business.

“I’m like all the restaurants and bars,” Voss said. “I can’t be open. It’s a sad state of affairs with what’s going on in the whole country. Everybody is hurting with all small business. It’s killing us. I just hope to keep my head above water. Then they shut all this school trap shooting down.”

The Le Sueur-Henderson High School trap team, however, scheduled a delayed, shortened season. The three other schools that shoot at Caribou — St. Peter, Cleveland and Belle Plaine — didn’t come back.

Caribou, founded in 1953 by Voss’ dad, Earl, also usually has a high school tournament every year, and that’s been canceled because large groups are not allowed.

“I’m not the only guy feeling the crunch,” Voss said. “It definitely took its toll. At least I’ve got the shooting part to fall back on, and I’m seeing a little bit more traffic with the rifle range. People want to get out and have things to do, like fishing.”

Minnesota Gov. Tim Walz can’t be claimed to have a bias against the business, as he “actually shoots out here,” Voss said. “He was here last fall. He likes to shoot.”

The business hopes to open up and show off the new pistol range, as regulations allow.