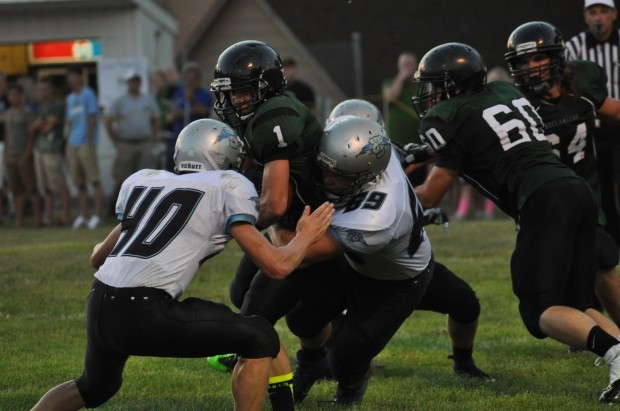 Sophomore lineman Alex Burns (69) and senior back John Christian take down the Waterville-Elysian-Morristown runner during their August game. (File photo) 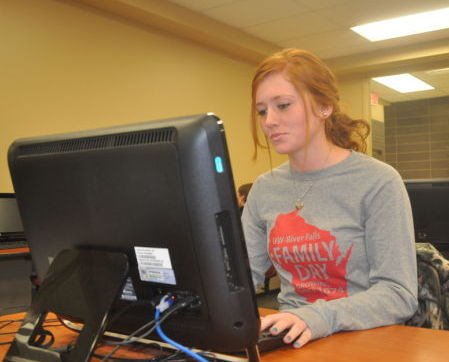 TCU senior Nora Miller takes a test that will help identify when she is ready to resume play if she suffers a concussion. (James Stitt/Le Center Leader)

Sophomore lineman Alex Burns (69) and senior back John Christian take down the Waterville-Elysian-Morristown runner during their August game. (File photo)

TCU senior Nora Miller takes a test that will help identify when she is ready to resume play if she suffers a concussion. (James Stitt/Le Center Leader)

Young athletes who play team sports often bond with their teammates, and don’t want to let them down. Sometimes that can mean attempting to play through injuries.

But some injuries are to dangerous to play through, and can be hard to identify — like concussions. So Tri-City United High School uses computer tests to help find out when a player has recovered from a concussion.

Last week, TCU athletes spent time in the computer lab taking a test, which gauges their verbal and visual memory, processing speed and reaction time. The results of the test provide a baseline assessment, so if an athlete suffers a concussion, their cognitive ability can be compared to see if they are at the same level.

Athletic Trainer Ellen Bastoni, who worked with students at TCU, said that the test is a very useful tool, because it evaluates a player’s memory and reaction time before an injury takes place.

“If you try to evaluate how they stand after the concussion, you don’t know how they were before,” said Bastoni of the baseline testing.

A concussion is a brain injury that results in temporary loss of brain function, which is usually caused by a blow to the head. People who suffer concussions may be confused, and often can not remember what happened immediately before or after the injury. A concussion can affect memory, judgment, reflexes, speech, balance and muscle coordination. Some symptoms of a concussion are prolonged headaches, dizziness, impaired balance, confusion, memory loss, ringing ears, or a sensitivity to light.

The test the athletes took was the ImPACT Concussion test, which is used by more than 7,400 high schools, 1,000 colleges and universities, 900 clinical centers. The test is not used to diagnose a concussion, but is a tool that can help health care professionals and educators make decisions after a concussion takes place.

“It is definitely a great tool to use to make sure that [an athlete] is healed before they go back,” said Bastoni.

The Minnesota State High School League has not made the test mandatory for athletes, but TCU has made it mandatory for those participating in contact sports (football, basketball, wrestling, hockey, cheerleading). Non-contact sport athletes also have the option to take the test, but it is not mandatory. TCU Athletic Director Greg Feddema said that since concussions have begun to be talked about more, a tool like the ImPACT Concussion test is needed.

“With concussions ever present, it only makes sense to take advantage of this,” said Feddema.

Nora Miller, a multi-sport athlete at TCU, said that the baseline test is an important tool for athletes. The senior said that after a concussion, it may be difficult for players to know when they are ready to see the playing field again.

“It is very important because it helps you know if you are ready to play or not,” said Miller.

She said that some athletes may not know when they have truly recovered from a concussion. So now that there is a test they can look at, showing how their cognitive ability has changed, student athletes can understand when they are ready to play.

“Some people will say they are ready,” said Miller. “But now maybe they will see this and think, maybe I should wait to see how much better I can get before I get back on the court.”

According to the Centers for Disease Contol and Prevention (CDC), there are an estimated 173,285 sports and recreation related traumatic brain injuries (TBI) each year for those age up to 19 years old. The activities most associated with TBIs are bicycling, football, playground activities, basketball, and soccer. Numbers and rates of TBIs are highest and football, with 0.47 of every 1,000 athletes having a TBI.

TCU football coach Ken Helland said that concussion prevention is a very important aspect of playing football. One of the things that he and other coaches constantly preach is for players to see what they hit. By keeping their head up, even if a collision is helmet-to-helmet, it isn’t as severe. With heads up, players face masks would collide, but if their heads were down, the top of the helmet would hit, which is more dangerous.

Helland said that this past year there was only one concussion on the football team. He said that it is important to make sure a player is 100 percent before returning to the field. According to the American Association of Neurological Surgeons (AANS), a second concussion that occurs soon after the first can be very strong. And because players need to heal before they see the field, Helland emphasizes that it is better to miss one or two games, rather than sit out an entire season. With the ImPACT Concussion test, it is easier for coaches to know when their player is ready.

“Now no one has to guess when they are better,” said Helland.

Each year, U.S. emergency departments (EDs) treat an estimated 173,285 sports and recreation related TBIs, including concussions, among children and adolescents, from birth to 19 years.

During the last decade, ED visits for sports and recreation related TBIs, including concussions, among children and adolescents increased by 60 percent.

Children from birth to 9 years commonly sustained injuries during playground activities or while bicycling.

71 percent of all sports and recreation related TBI emergency department visits were among males.

Females aged 10-19 years sustained sports and recreation related TBIs most often while playing soccer or basketball or while bicycling.

Statistics from the Centers for Disease Control and Prevention