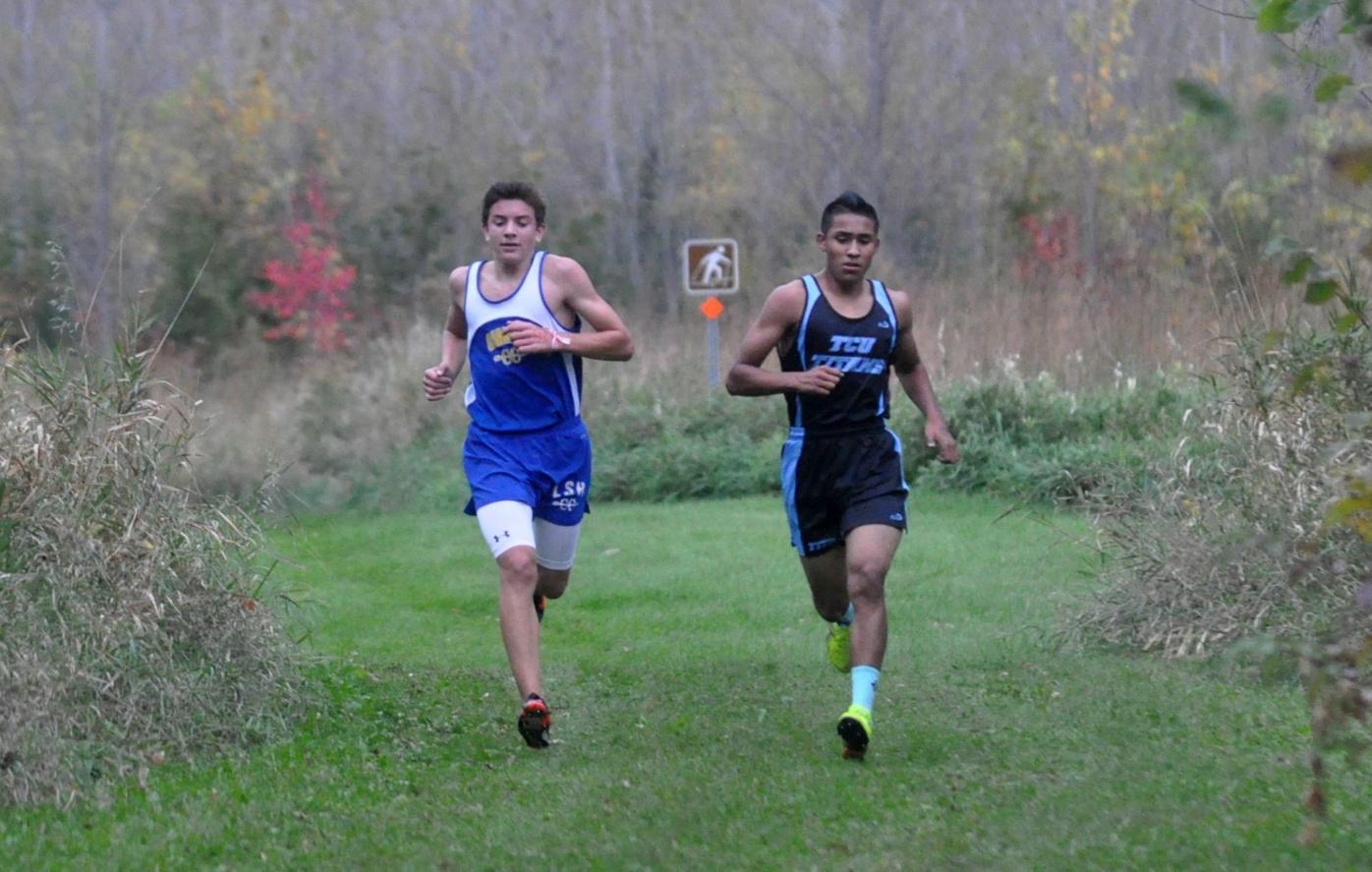 Lane Schwarz of LS-H (left) and Hugo Ruiz of TCU stayed side-by-side at the front of Tuesday’s race in Henderson. Ruiz ended up winning the race in 17:23, while Schwarz was second in 17:35. (Alex Kerkman/Le Center Leader) 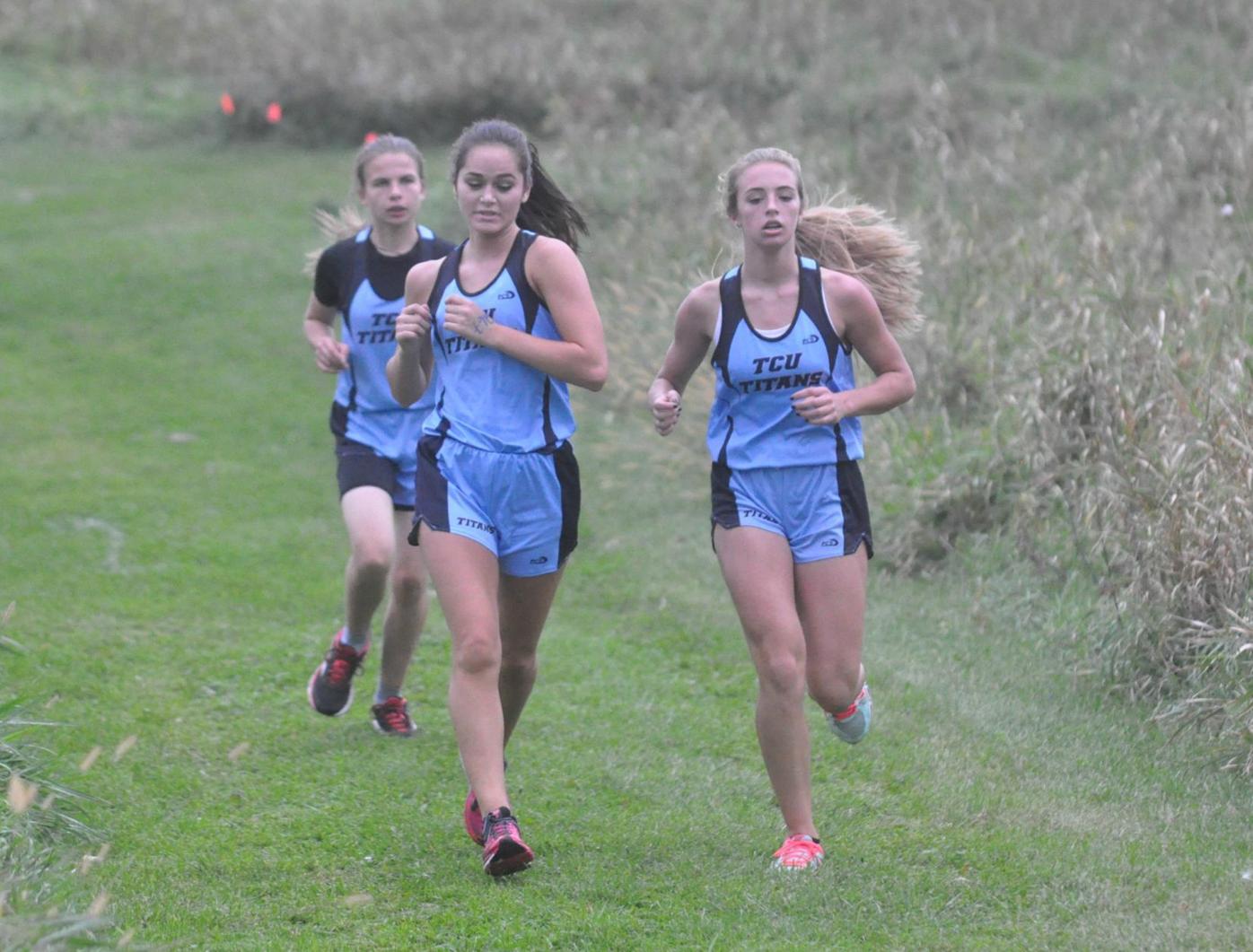 Lane Schwarz of LS-H (left) and Hugo Ruiz of TCU stayed side-by-side at the front of Tuesday’s race in Henderson. Ruiz ended up winning the race in 17:23, while Schwarz was second in 17:35. (Alex Kerkman/Le Center Leader)

This time, the rain couldn’t stop the runners.

The Tri-City United boys and girls cross country were back in action Oct. 4 at the Ney Nature Center in Henderson after a two-week break. TCU’s last meet, scheduled Sept. 27 in New Prague, was cancelled due to rain.

The Titans had no problems shaking off rust as the varsity boys and girls runners combined to take first place as a team with 130 points.

Tuesday’s meet featured an unfamiliar set up. Rather than having separate races for both teams, the top five boys and girls competed together as one group. Adding to the intrigue, it started raining less than 15 minutes before the starting gun went off.

“This is a very different meet. It’s nice to have the team bonding with the boys and girls getting to run together,” coach Brian Fogal said. “It’s a more fun and laid back meet before we start getting into the end of the season.”

TCU’s No. 1 boys runner Hugo Ruiz jumped out to a great start, staying close with Layne Schwarz of Le Sueur-Henderson. The two stayed neck-and-neck for the first half of the race until Ruiz started kicking it into extra gear. The freshman won the race in 17:23, 12 seconds ahead of second-place finishing Schwarz.

“My plan with coach was to stay up with Layne for the first mile and starting picking up (the pace) a bit at the two mile, constantly picking it up after,” Ruiz said.

Hunter Rutt was TCU’s second finisher, and the only other runner under the 19 minute mark. Rutt placed third in 18:26 and was followed by Jack Dooley who took fourth in 19:05.

Josh Pichotta was the Titans No. 4 runner, taking eighth overall in 19:26 while Taylor Jackson finished 11th in 19:49.

Delilah Baedke was the second girl to cross the finish line and 17th overall in a time of 21:01. The remaining TCU varsity runners stuck in a close pack, finishing within 10 seconds of one another.

TCU’s regular No. 2 girl Jaylee Hanvelt was kept out of the race as a precaution, limiting her chance of injury before the post-season.

“We’ve been doing really well this season despite quite a few injuries,” Jackson said. “We just want to keep getting healthy before the final races (of the season).”

The Titans’ score of 130 edged out the hosting Giants (145). Belle Plaine rounded out the meet with 190 points.

The Titans have a quick turnaround before its next race 4 p.m. Thursday at Waseca High School.

Sports and youth writer with the Faribault Daily News. Graduated from Minnesota State University, Mankato in Dec. 2014 with a degree in Mass Communications. Originally from Holmen, Wisconsin, class of 2010. Fan of the 13-time World Champion Green Bay Pack