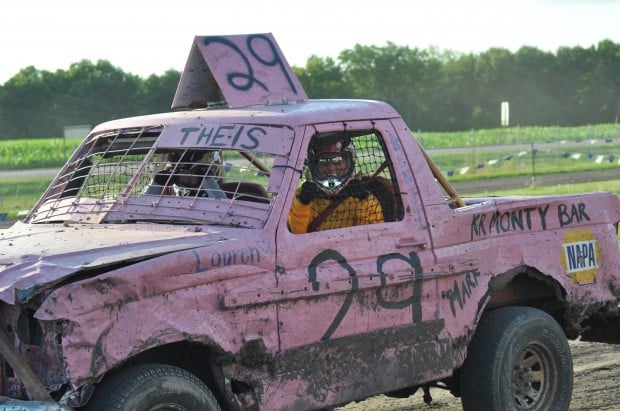 Brianna Theis gives the thumbs up as she waits to enter the race. (James Stitt/Le Center Leader) 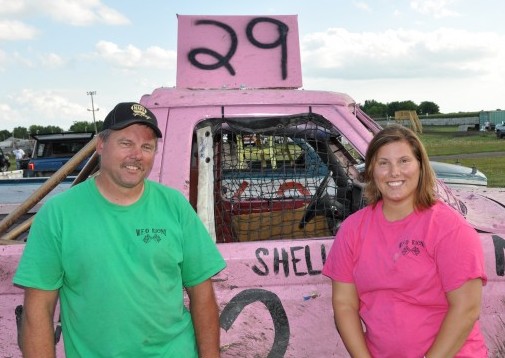 John and Brianna Theis have been racing together for more than a year now. John started racing when he was 12 and his daughter Brianna started three years ago. (James Stitt/Le Center Leader) 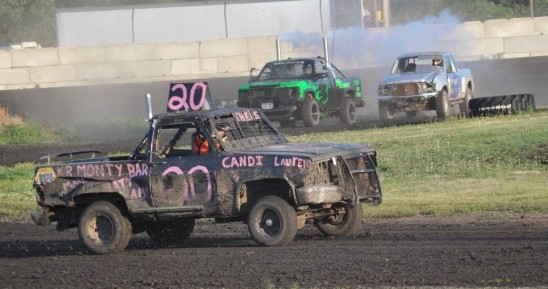 John Theis jumps out ahead of his competition. (James Stitt/Le Center Leader)

Brianna Theis gives the thumbs up as she waits to enter the race. (James Stitt/Le Center Leader)

John and Brianna Theis have been racing together for more than a year now. John started racing when he was 12 and his daughter Brianna started three years ago. (James Stitt/Le Center Leader)

John Theis jumps out ahead of his competition. (James Stitt/Le Center Leader)

When most fathers teach their daughters to drive, it doesn’t often involve a roll cage, a helmet and lessons on how to trade paint with other cars. But that is what is being passed down in the Theis family.

Brianna and John Theis, of Le Center, spend their summer nights unlike most other father-daughter duos. They take to the race track, where the mark of a fierce competition is a loose wheel or a ding in the door panel. The Theises race their trucks at the muddied tracks at Sibley County’s Arlington Speedway.

For a handful of nights in the summer, the two line up against each other, hearing a new joke about the father-daughter competition each time, before it is drowned out by the thunderous roar of engines. In those few moments, the nerves kick in, but as soon as the race starts, it all goes away.

“I still get butterflies, but once you are out there, nothing matters,” said Brianna Theis. “It is not like in you’re in a regular streetcar. It is not like I have to drive it to work in the morning.”

John Theis started racing snowmobiles and all-terrain vehicles when he was 12. After four broken ankles, he decided it was time to race in something a little bigger. So he swapped his recreational vehicles for a truck. His passion for racing was passed on to his daughter Brianna, who eventually followed in her father’s footsteps.

Three years ago, Brianna Theis entered her first race, and it looked like it would be a disastrous start. Brianna Theis, then 21, and her father were dealing with issues all day, which culminated in mechanical failure in the first heat. Her car’s brakes failed and she was unable to finish the race, which meant that she would have to fix her car before the next race, and if it was good enough to go, she would have to start in last place.

The father-daughter team worked hard to fix the brakes, and Brianna Theis lined up her car in the last place spot with a tall order in front of her. Not knowing the word quit, she outmaneuvered the competition to take first place.

“I had to rub it in some faces, but I felt I deserved that,” said Brianna Theis.

“To see her finish first … just the expression on her face was well worth it,” said John Theis.

Brianna Theis continued to race after her first victory, never stepping away from the intimidatingly male-dominated sport. She was warned away from painting her vehicle pink, which would further point out that she was one of the few women racing. But after a year under her belt, she took out the paint and turned her truck pink. She encourages other women to try racing, saying that they just might like it.

“Women are just as good of drivers as men,” said Brianna Theis. “You can’t tell the difference once you put the helmet on.”

Part of the process is getting the vehicles prepared for the race. The duo will strip the trucks down, removing all glass and plastic. While others will decorate their cars head to toe with designs and props, the Theises prefer to keep things simple, with a black truck and a pink truck, no skulls or flames. John Theis said that taking the truck apart is exciting, it is like opening a present.

“It is exciting because you know whats coming, but you’re not sure what it is yet,” said John Theis. “It kinda starts looking like a beast.”

As Brianna’s passion for racing continued to grow, she eventually ended up in the same racing class as her dad. The two started competing in truck racing, and have enjoyed the competition and bonding.

Even though John Theis is proud of his daughter, he is still first and foremost her father. The pride he has is always mixed with concern.

“I always have one eye on her and one on the track,” said John Theis. “As a dad you’re looking out to make sure everyone is playing nice.”

Just because they are father and daughter, doesn’t mean that they are always working as a team. While they will look out for each other, there is still some competition between the two — a father who is looking to remain on top, and a daughter pushes to succeed.

“She’s had a couple [races] where she has made it difficult to get around,” said John Theis. “But you can’t let the kid get in front of you.”