WEM senior Toryn Richards was named the Faribault Daily News’ All-Area Girls Basketball Player of the Year after she led the Buccaneers in scoring, rebounding and blocked shots this season. (File Photo/southernminn.com) 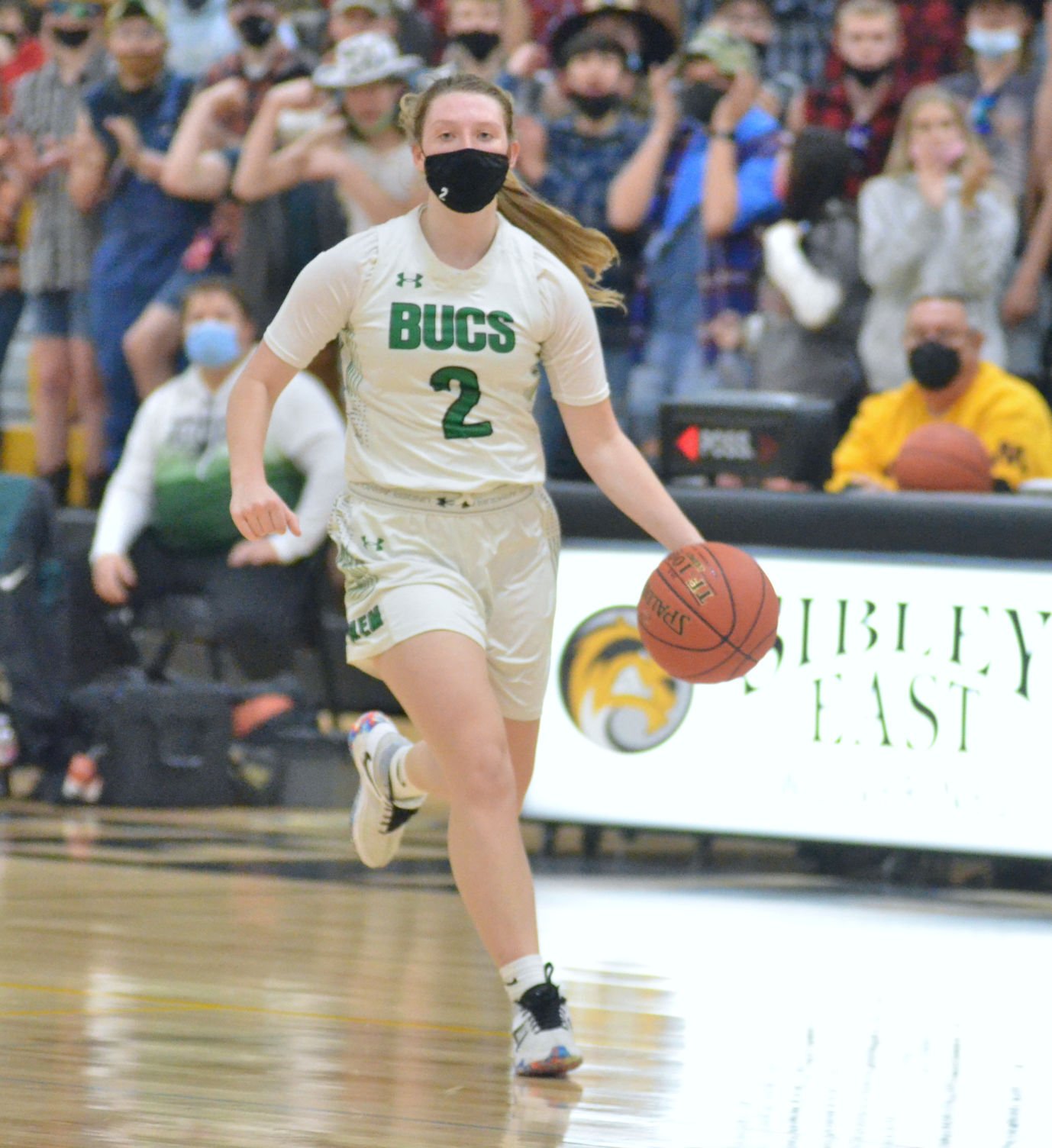 WEM senior guard Brielle Bartelt finishes her career near the top of the program record list in a number of statistical categories. In addition to finishing first in made 3-pointers, Bartelt is also second in points and assists. (File Photo/southernminn.com) 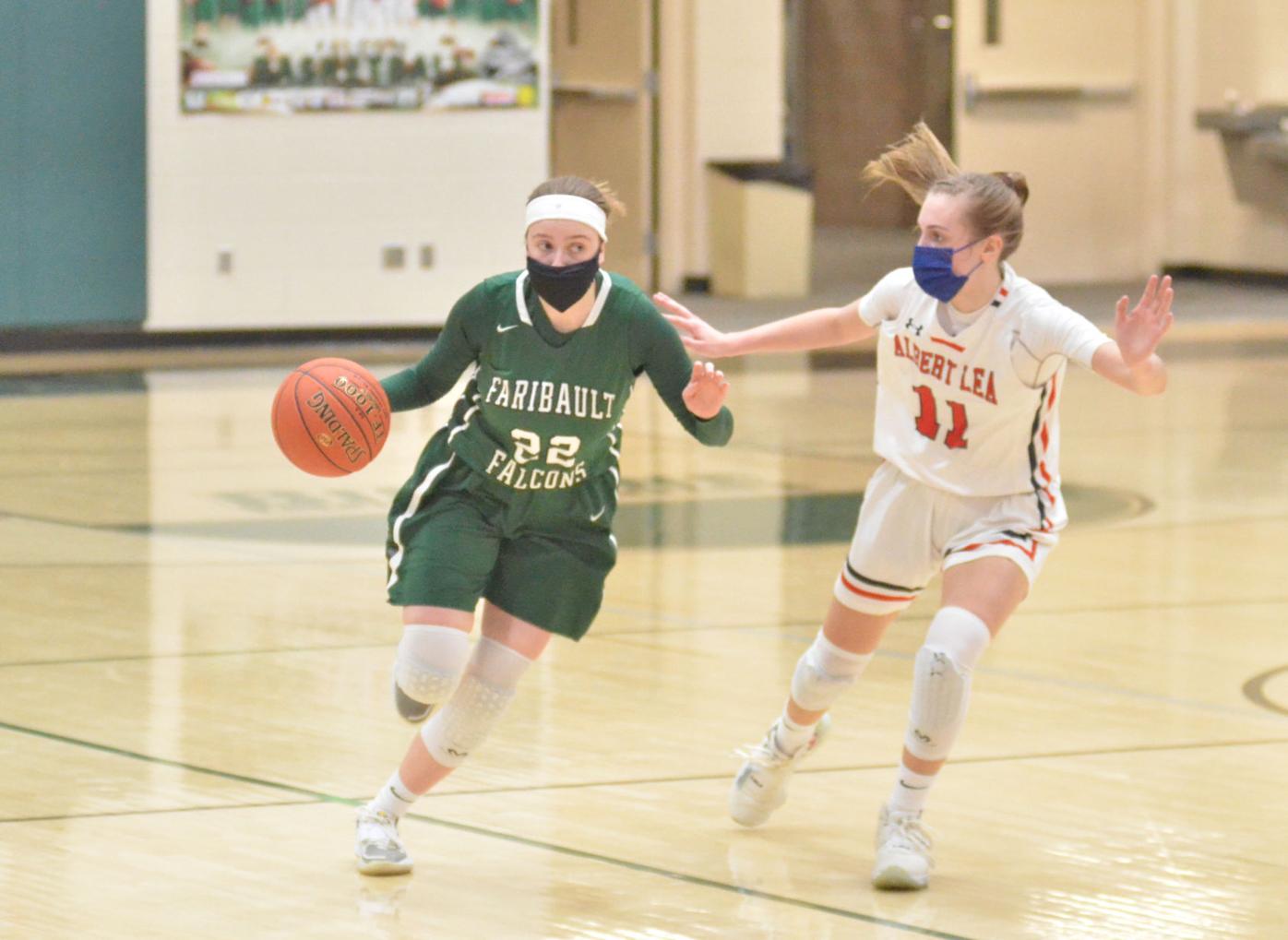 Faribault junior Evy Vettrus dribbles up the court during a 54-43 loss against Albert Lea at Faribault High School. (File Photo/southernminn.com) 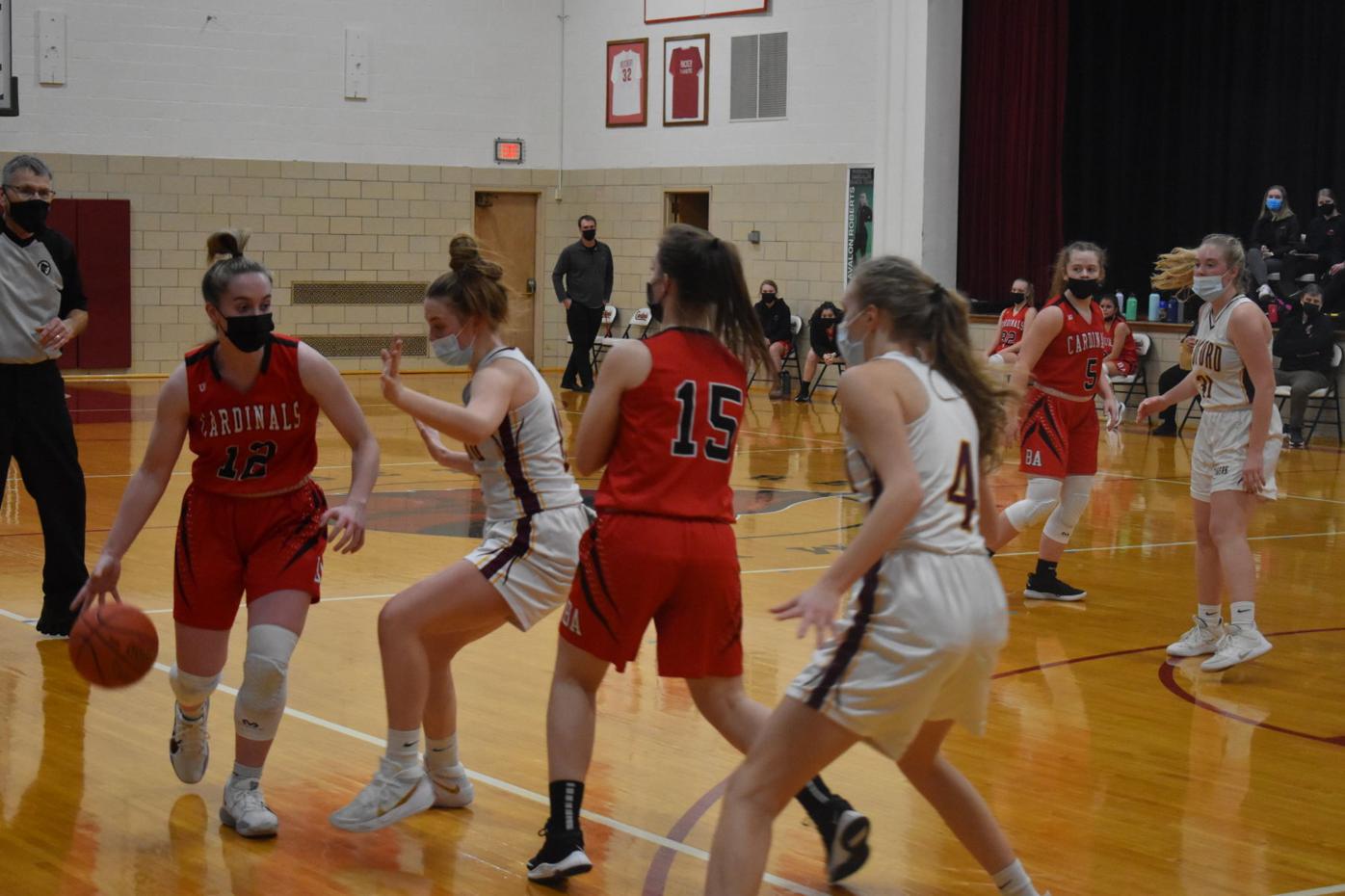 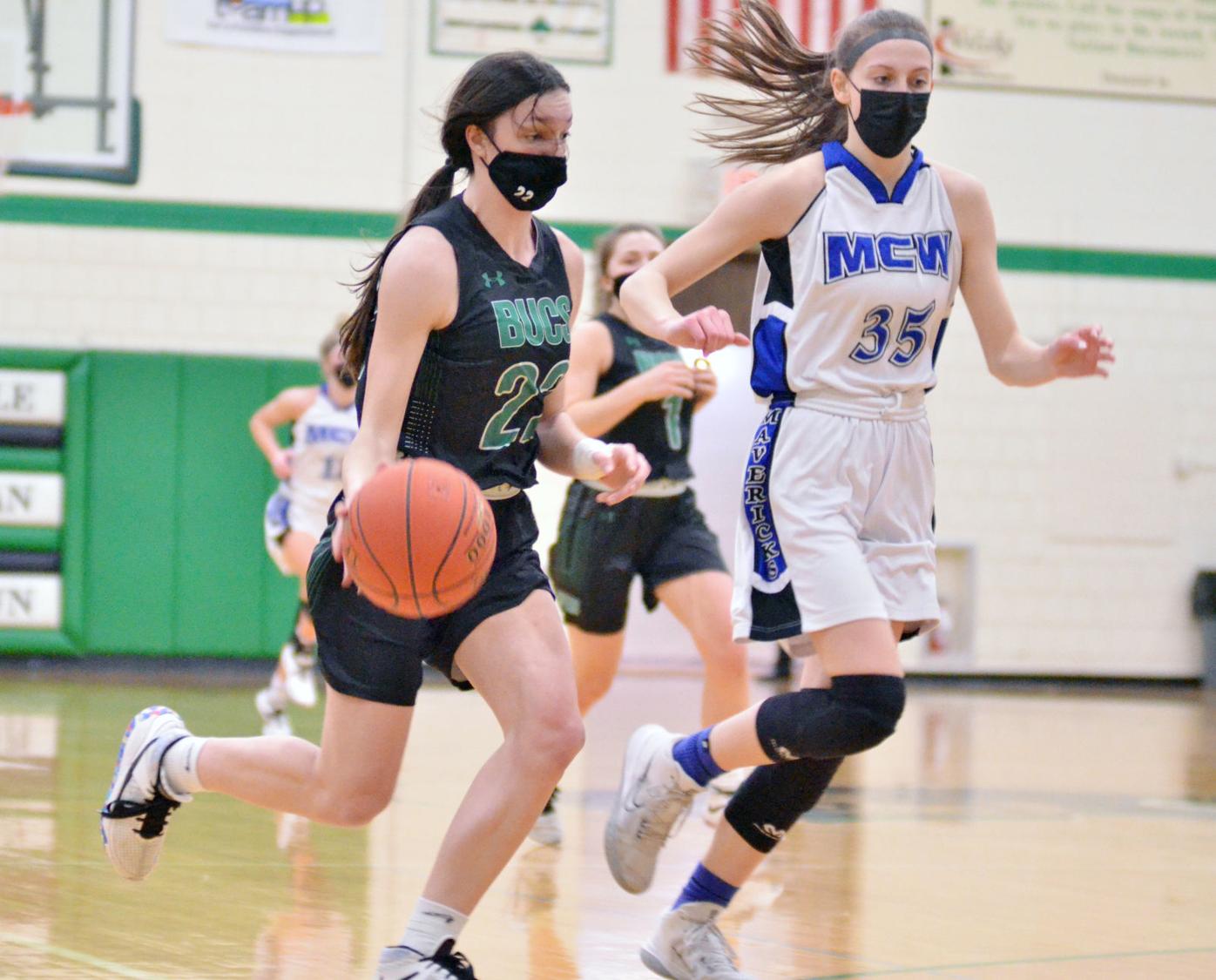 WEM senior Kylie Pittmann speeds up the court during a 61-26 victory against Martin County West in the Section 2A South subsection title game in Waterville. (File Photo/southernminn.com) 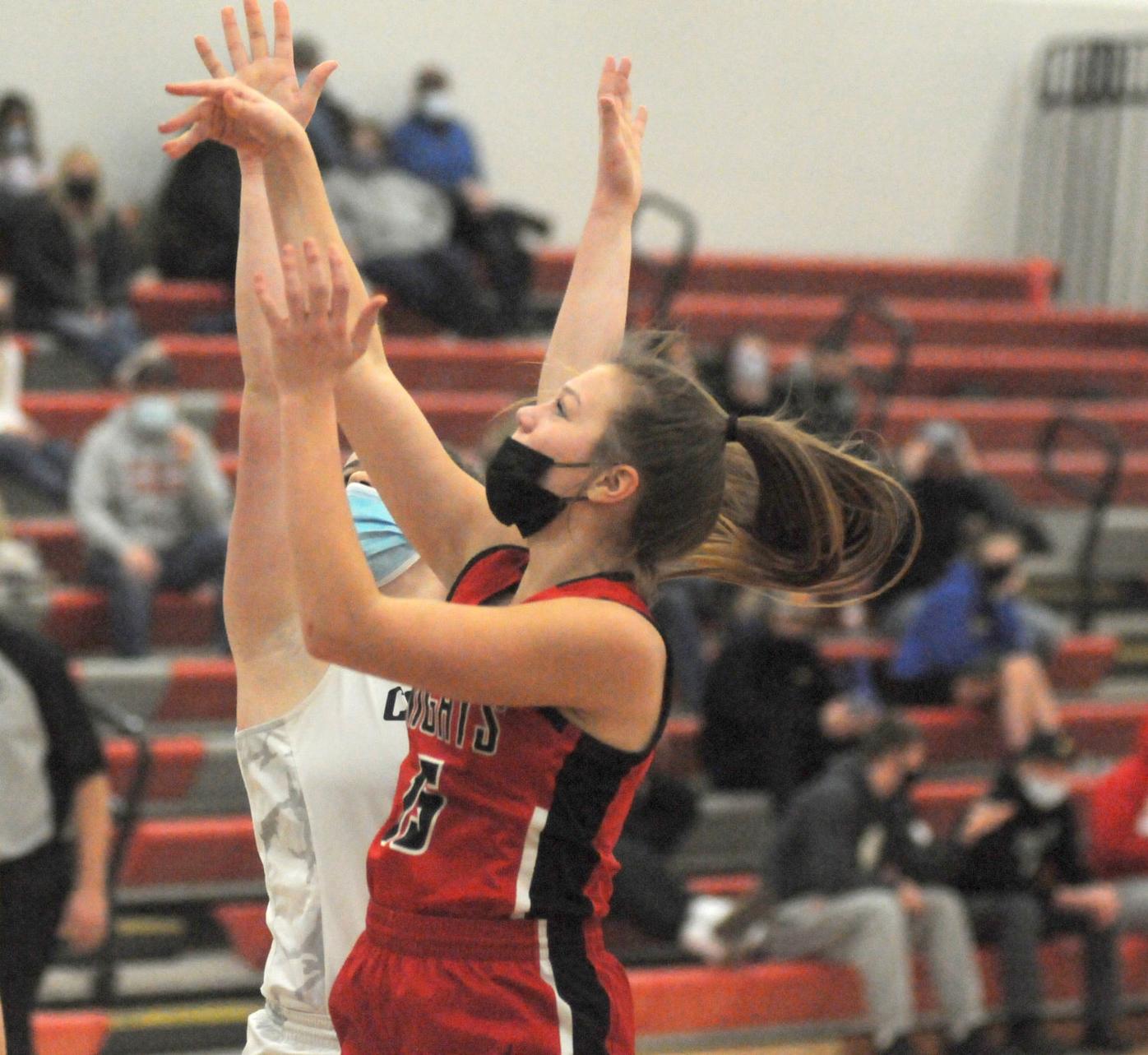 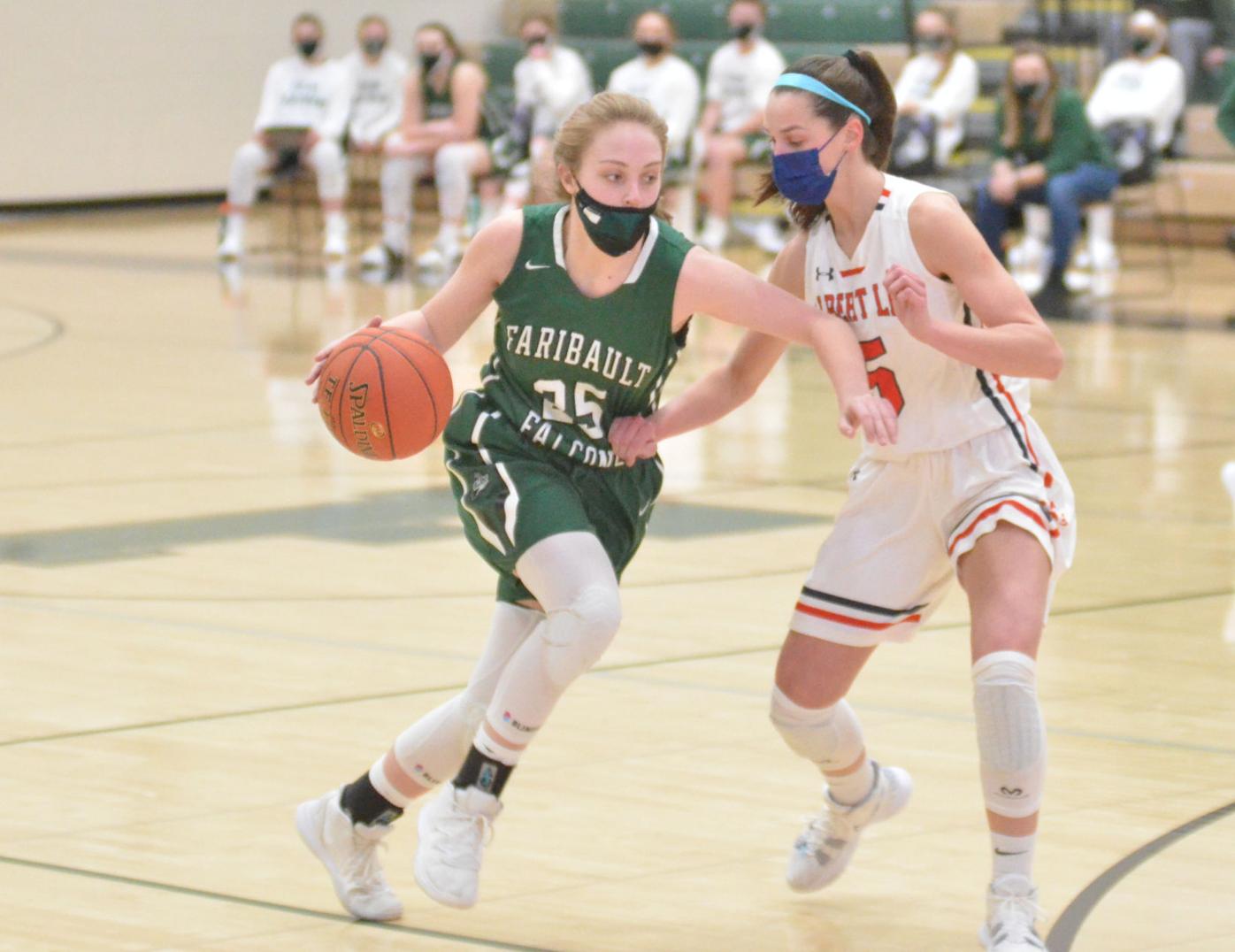 Faribault’s Olivia Bauer shields the ball from an Albert Lea defender during a 54-43 defeat at Faribault High School. (File Photo/southernminn.com)

Each year, the senior continued to improve and add different elements to her game that allowed her to morph into one of the most versatile and dangerous players in the Gopher Conference and southern Minnesota.

This year, the result was Richards leading the Buccaneers in scoring, rebounding and blocks, while also finishing with the second-most steals and third-most assists. All that led to Richards being named the Faribault Daily News’ All-Area Girls Basketball Player of the Year.

“I looked back today and her points as a freshman, she averaged about 9.5, as a sophomore she averaged about 10 and a half, last year she was a little over 13 and then this year she was up to 17,” WEM coach Ty Kaus said. “Every year she’s improved her points, her rebounds have improved every year, her assists have taken a big jump the last two years, steals improved each year — everything just got better and better.”

When Kaus took over the girls basketball program prior to the 2018-19 season, he quickly understood what an exceptional situation he was walking into. Richards, along with guard Brielle Bartelt, were both coming off all-conference seasons as freshmen. Both Richards and Bartelt — plus the rest of this season’s 11-player senior class — helped Kaus and WEM finish second in the Gopher Conference that first season before winning back-to-back conference titles.

“My favorite memory is definitely beating St. Mary’s my junior year to go to state,” Richards said. “That was an amazing experience. That’s definitely the favorite, because that was the first time our (program) ever went to state.”

The biggest jump in Richards’ play came in her final season, however. After the graduation of Trista Hering and Payten Polzin from last season’s team, WEM was lacking an experienced presence in the post. Seniors Lindsay Condon and Sadie Oorlog both stepped up to log key minutes inside, but there were plenty of other stretches in which Kaus planted Richards inside with four other guards patrolling the perimeter.

That area inside the paint and around the basket is where Richards was able to boost her scoring average by 4 points this season while not drastically increasing the number of shots she took per game.

“If you look at her numbers from this year to last year, her points in the paint skyrocketed, her 2-point percentage skyrocketed,” Kaus said. “She was just always really good in transition and she got out in transition a little bit more, but she just got stronger attacking the basket and moving without the ball and getting the ball in positions where she could score from closer in … She was just a lot more efficient with it and shot a lot better percentage.”

Those improvements took a lot of work in the offseason, particularly with her ability to dribble and attack the basket. That only added on to a busy training schedule already filled with volleyball and track and field, the two sports she’ll continue playing competitively when she enrolls at Minnesota State University, Mankato, this fall.

The biggest reason for that time commitment in the basketball gym wasn’t borne out of an insatiable desire to dominate on the court. Rather, Richards said she wanted to make the best out of her last season playing with the friends she first started playing the sport with back in fourth grade.

“It’s really a family thing for me,” Richards said. “These girls, I’ve been playing with them since I was very young, and this is the last sport I got to play with all my friends one last time. That really told me, like, ‘Hey, let’s give this our all this basketball season.’”

That’s part of what else Richards brought to the WEM girls basketball team, and what allowed her to serve as a team captain for several years.

“It ended a little earlier than we wanted it to, but we don’t have the success we’ve had the last three-plus years without her,” Kaus said. She’s been a big part and a big reason why we’ve won two conference titles and got second her sophomore year, got to three subsection finals and won two of them, two section finals. She’s a huge reason why we had the success we had.

“This whole group is filled with girls that get the job done on the court, off the court, in the classroom, in the community and she’s another one that’s in that line, too,” he continued. “She’s a great kid and a pleasure to coach the last three years and is someone that younger generations can look up to and try to emulate.”

Bartelt likely was more than deserving enough to be named the All-Area Player of the Year herself. She averaged 13 points and 3.5 assists a game as a senior. For her career, Bartelt finished only four points away from breaking the program's all-time scoring record, and in a normal-length season, would have easily surpassed that mark. She made twice the amount of 3-pointers in her career than the next closest player in program history, and also finishes second all-time in program history for assists.

Huerta was part of a two-headed attack that combined to lead the Cardinals in nearly every category, and was a big factor for the team recovering from an 0-7 start to finish 6-3 for the rest of the regular season. Huerta led the team in scoring with 11.2 points a game, assists with 3.1, steals with 3.1 and also grabbed 4.2 rebounds a contest.

Whatever else needed to be done for the Buccaneers, Pittmann was always up to the task. WEM coach Ty Kaus called the athletic wing his best defender, and she typically was assigned with guarding the team's top offensive threat regardless of position. That didn't hinder her elsewhere, as she was still third on the team in scoring with 9.5 points a game, second in 3-pointers made, third in rebounding and led WEM in assists and steals, while tying for the team lead in blocks with Richards.

Whenever it felt like the Buccaneers needed a basket or a big play, it was often Richards slicing toward the basket for a layup, grabbing an essential rebound or forcing a turnover. All in all, she led WEM in scoring, rebounding and tied for the team lead in blocks.

Vettrus was typically the key to the offense this season for the Falcons, as she was always a threat to take and make any shot from behind the arc. She finished averaging 9.7 points a game, while also shooting 38.2% on her shots from inside the arc and 81.3% from the free throw line.

After a slow start to the season while working her way out of quarantine, Ready exploded down the stretch to help the Buccaneers win the Gopher Conference title. She made more than half her 3-pointers in the last seven conference games, during which she averaged 12 points a game. For the season, she shot over 40% from 3-point range and averaged eight points a game with limited volume.

The other portion of the two-headed attack for the Cardinals. Trump was second for BA in scoring with 10.2 points a game, assists with 2.6 and steals with 1.2, while also joining with Huerta to play nearly every minute this season. She also led the Cardinals 3-pointer percentage at 32%.

Rechtzigel, along with Tessa Erlandson, carried the Knights offensively on most nights. The inside presence averaged about 12 points a game to go with about three rebounds a night, while also shooting 33% from the floor.

Swanson may not have been a dominant scoring force for the Falcons, but she provided a key defensive presence, where she averaged 4.1 rebounds a game and blocked a total of 10 shots.

Bauer gobbled up rebounds from her position on the wing (she averaged 4.6 a game) while also swiping a total of 13 steals this season to go along with averaging 6.4 points a game and 1.9 assists.