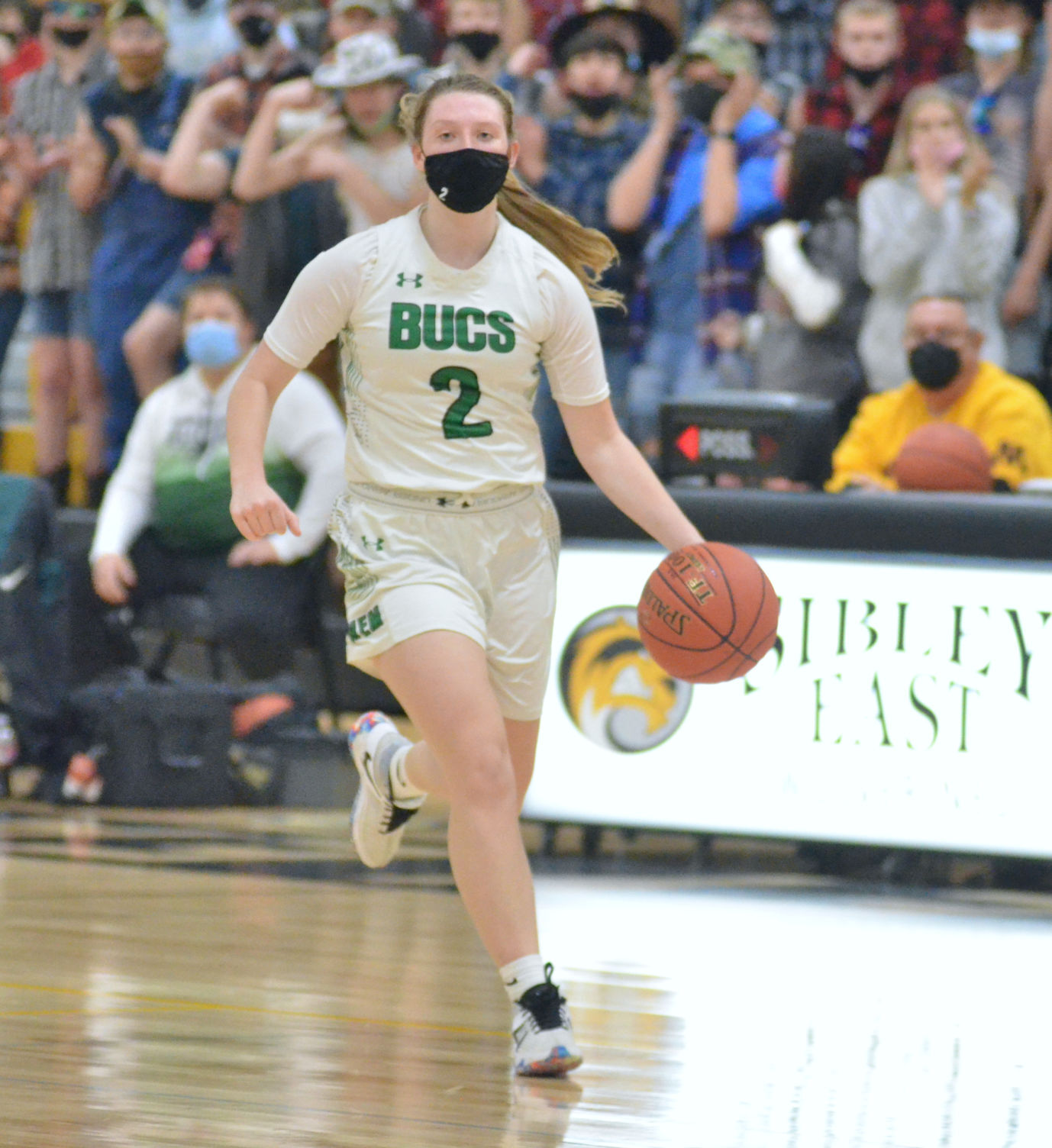 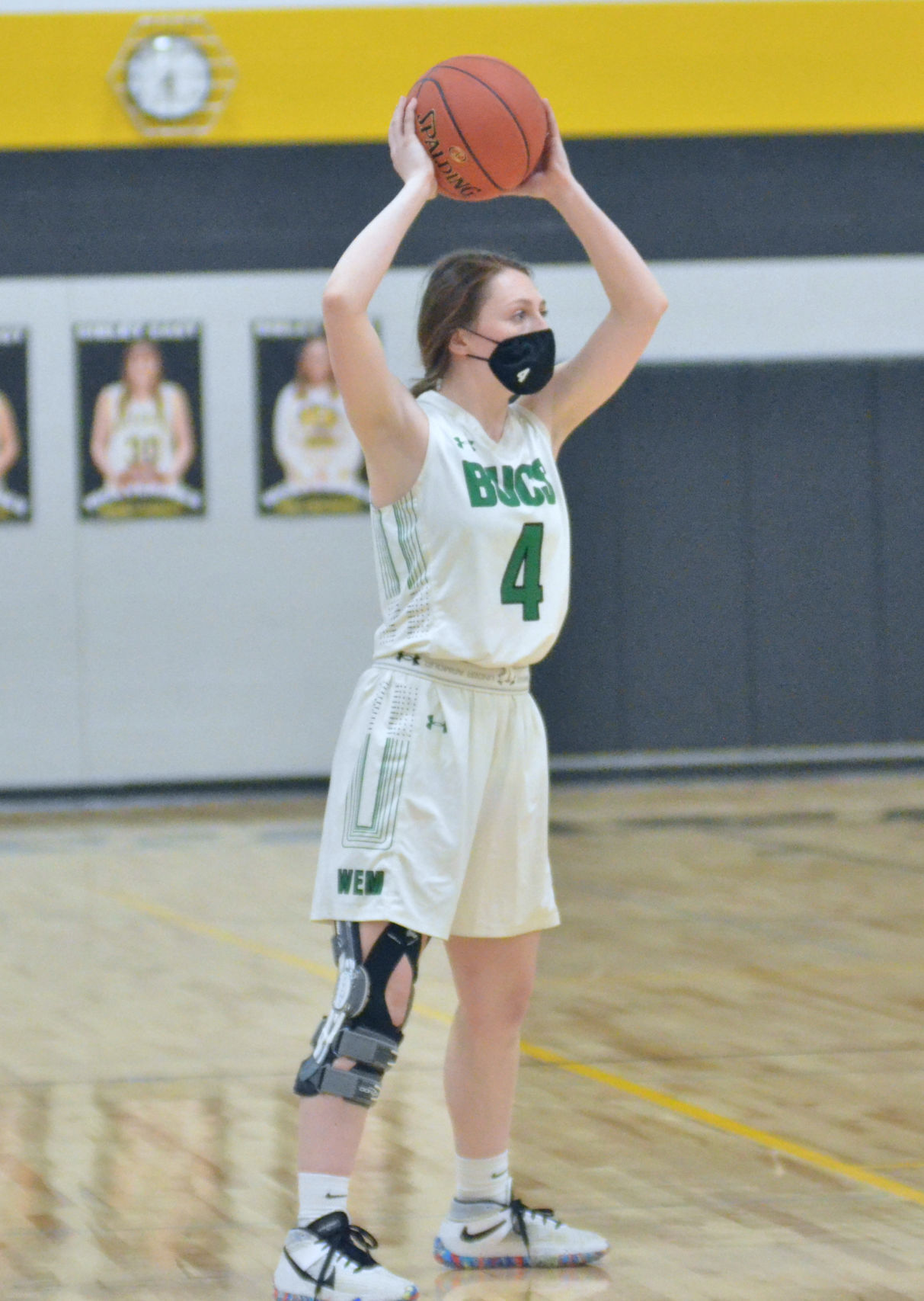 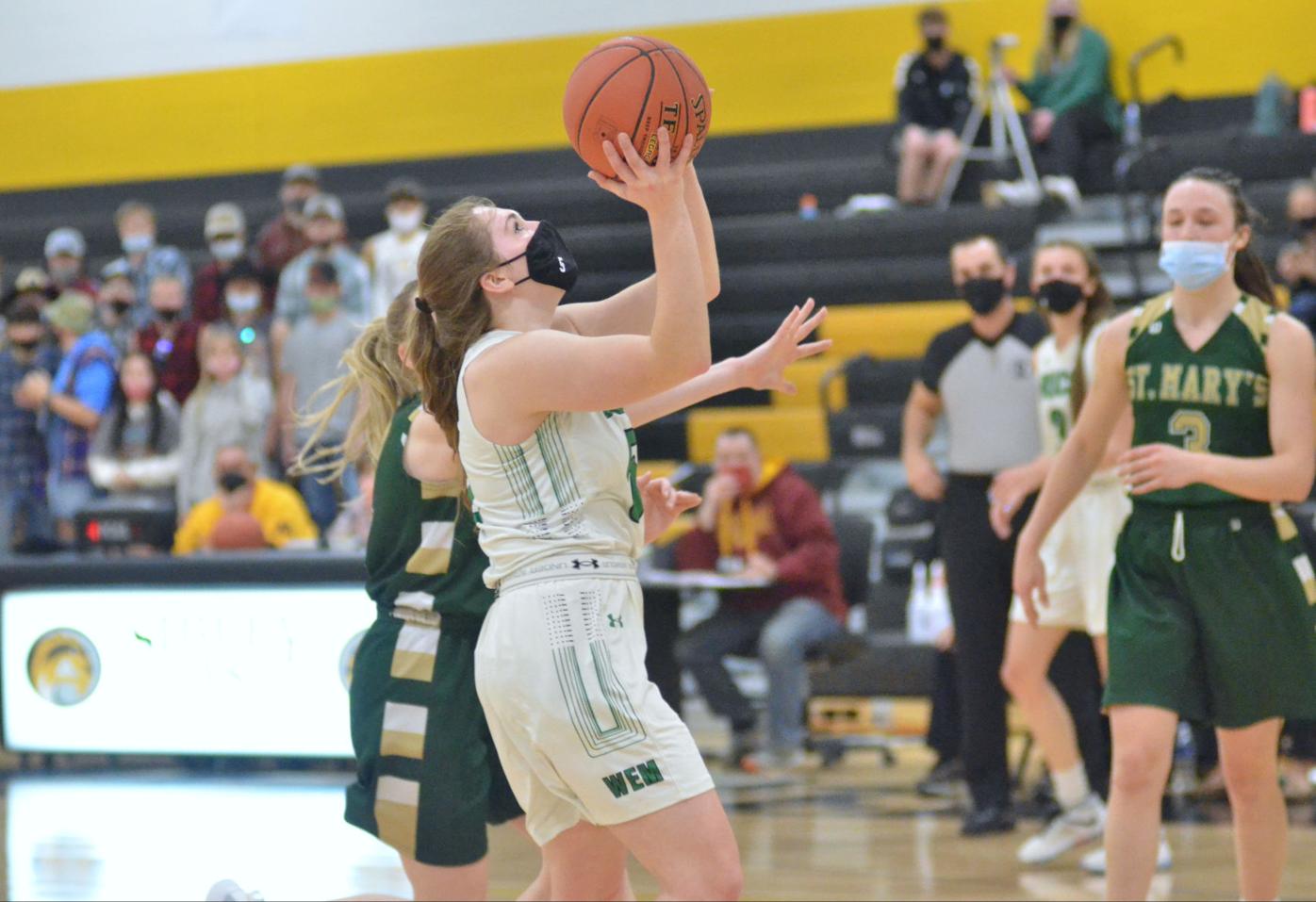 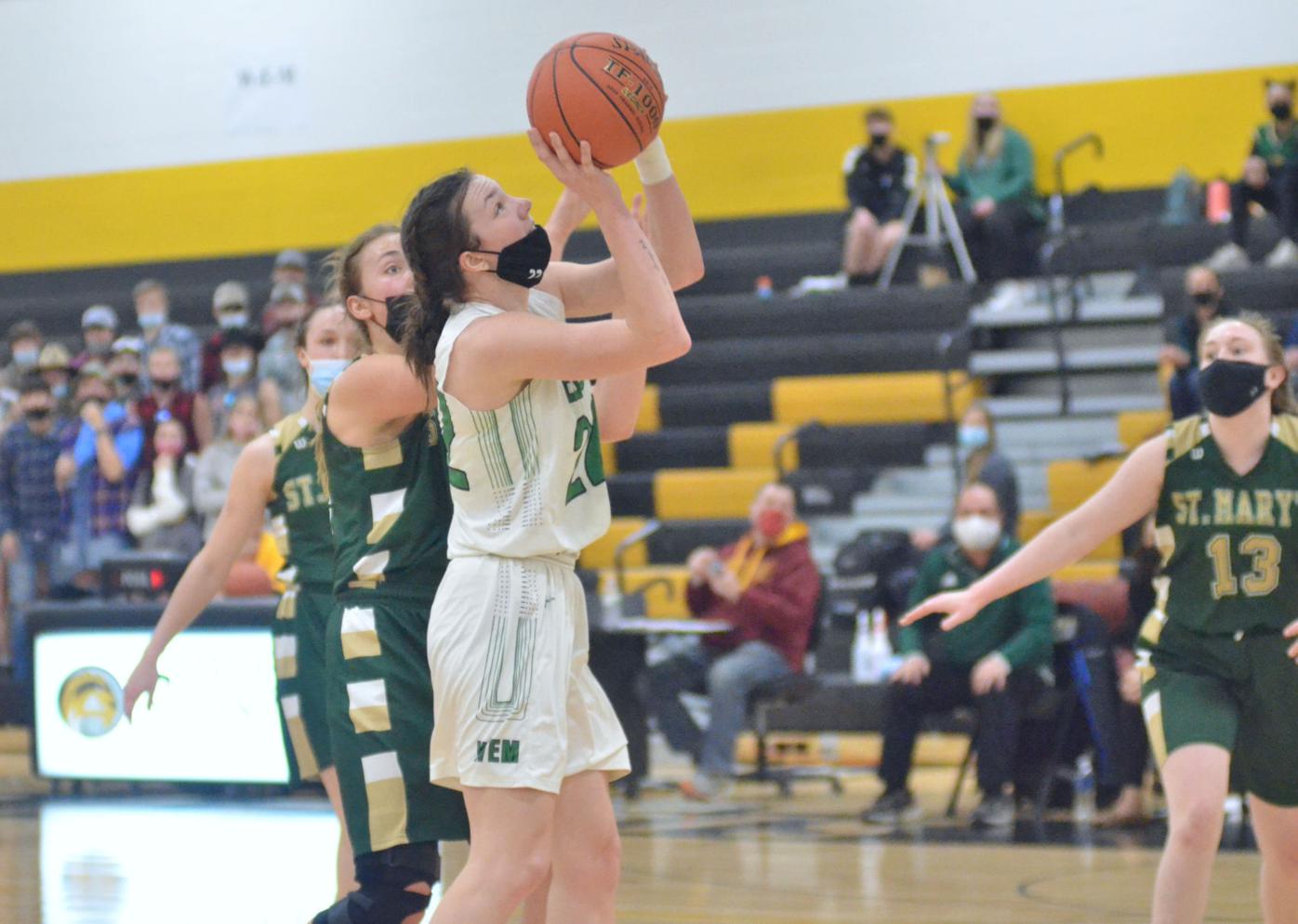 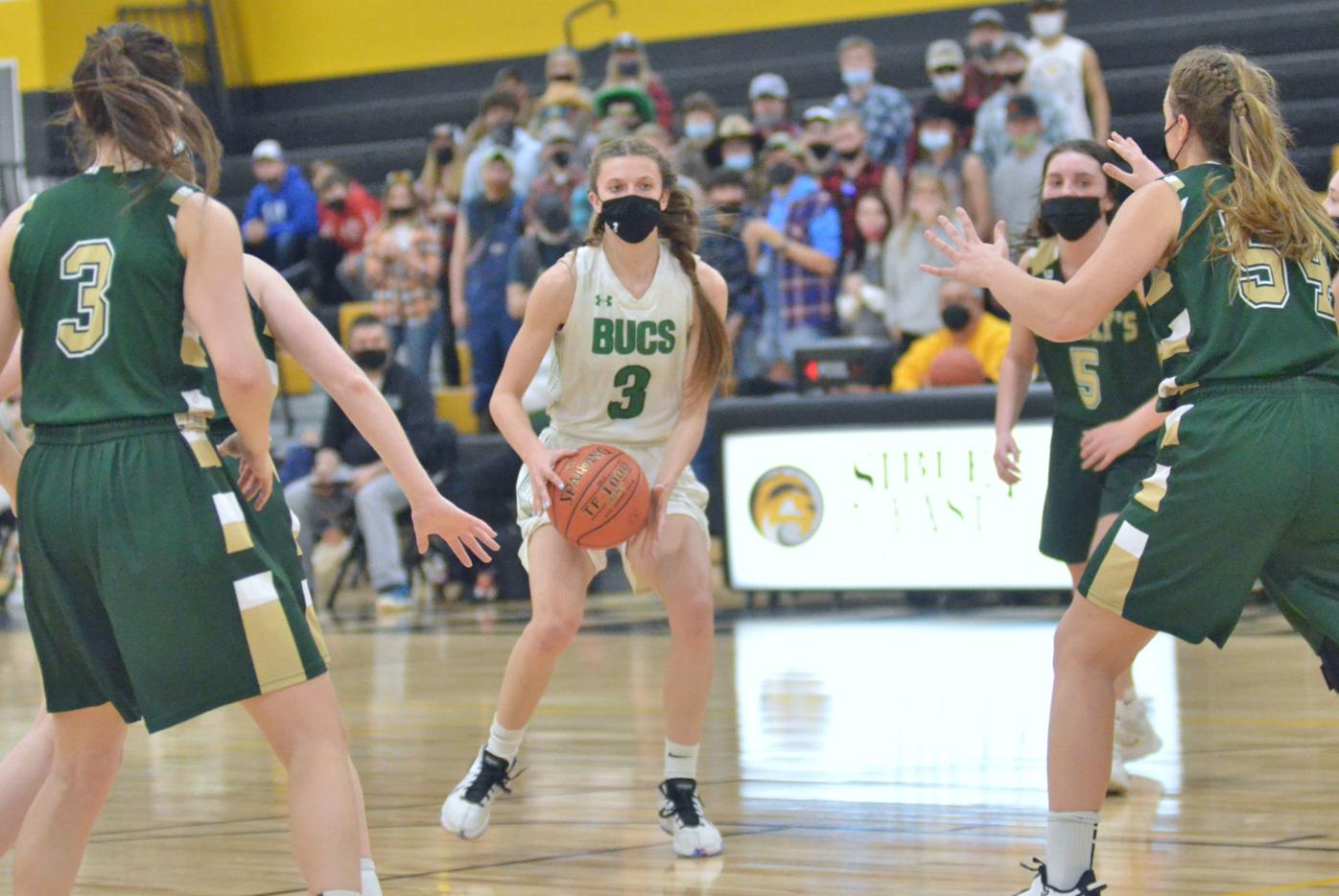 Only one team has slowed down the Sleepy Eye St. Mary’s basketball team and its superstar junior Madison Mathiowetz this season.

Waterville-Elysian Morristown did it twice, including in Thursday’s Section 2A championship at Sibley East High School in Arlington.

Unfortunately for the Buccaneers, they still lost both those games, and the Knights avenged a loss in last season’s section championship Thursday with a 64-59 victory to maintain their undefeated record and advance to the Class A state tournament.

“(Mathiowetz) is a heck of a player and she made some big shots,” WEM coach Ty Kaus said. “We talked about how she’s going to get her points and get her shots, and in the first half I thought we did an absolutely fantastic job. We probably needed to score a little bit more.”

In that first half, Mathiowetz scored only seven points, and Sleepy Eye St. Mary’s managed only 21 as a team. After stifling a team that averages nearly 80 points a game, WEM was laying the foundation for a possible section championship.

“We got up six there and hit a lull where I don’t think we scored for four or five minutes,” Kaus said. “That’s been our downfall lately, when we get into that rut and you can’t seem to get buckets.”

In the second half, Mathiowetz found a rhythm and started scoring from the outside, on slashing layups and with back-to-the-basket post moves. She eventually finished with a game-high 25 points.

Even with the Knights finding their offensive footing, the Buccaneers answered every scoring run with one of their own. After Sleepy Eye St. Mary’s scored 12 straight points to take a 40-36 lead with 10:24 remaining, WEM responded with a 7-0 run thanks to a 3-pointer from Pittmann, a pair of free throws from Brielle Bartelt and a layup via Toryn Richards.

After Mathiowetz’ layup with 4:38 remaining provided the Knights with a 54-49 lead, the two teams essentially traded baskets and stops, with the Buccaneers unable to trim the deficit to fewer than three points the rest of the way.

“I thought we tried to be a little too unselfish sometimes,” Kaus said. “We had some drives and some opportunities where I thought we should have gone up with some shots and we passed them up. We were trying to make that great play to a teammate.”

That unselfish attitude, while perhaps detrimental at times Thursday, typified what allowed this group of 11 seniors to claim back-to-back Gopher Conference titles for the first time in program history and qualify for the program’s first state tournament last season.

All eight players that stepped on the court for WEM on Thursday were seniors in Pittmann, Bartelt, Richards, Lindsay Condon, Ellie Ready, Autumn Taylor, Allison Rients and Sadie Oorlog.

“It’s a pretty special group in everything they do,” Kaus said. “It’s not just basketball, it’s not just the other sports. It’s academics, it’s everything outside of school and sports. It’s exactly what we want as representatives of our communities and they raised the bar for sure.”

With that bar raised, the expectation is the Buccaneers do not take any severe steps back as a program. After Kaus talked in a postgame huddle of the team’s 11 seniors — which also includes Ella Michael, Mya Geyer and Lily Grohman — he made a beeline toward the huddle of the non-seniors in attendance for Thursday’s game.

After that group has spent the last few seasons as the scout team for the Buccaneers, they have plenty of first-hand experience pertaining to the level of play and best practices that breed success.

“They’re getting to play against one of the best teams in the state every single day in practice,” Kaus said. “You see what it takes to get to a level like this, so hopefully that wets the appetite and gets people excited about the future. We’ve got some talent coming up and a group like this that we can look to to know what it takes to get to this spot.”

Back in the postgame huddle with the 11 seniors, Kaus emphasized the importance of not allowing one close loss erase the accomplishments of an entire career.

“know it has to end at some point, but you’re never ready for the end,” Kaus said. “I could not be more proud of this group and what we accomplished. I told them it hurts now and it hurts because we care a lot, but they have a lot to be proud of and they shouldn’t hang their heads at all.”