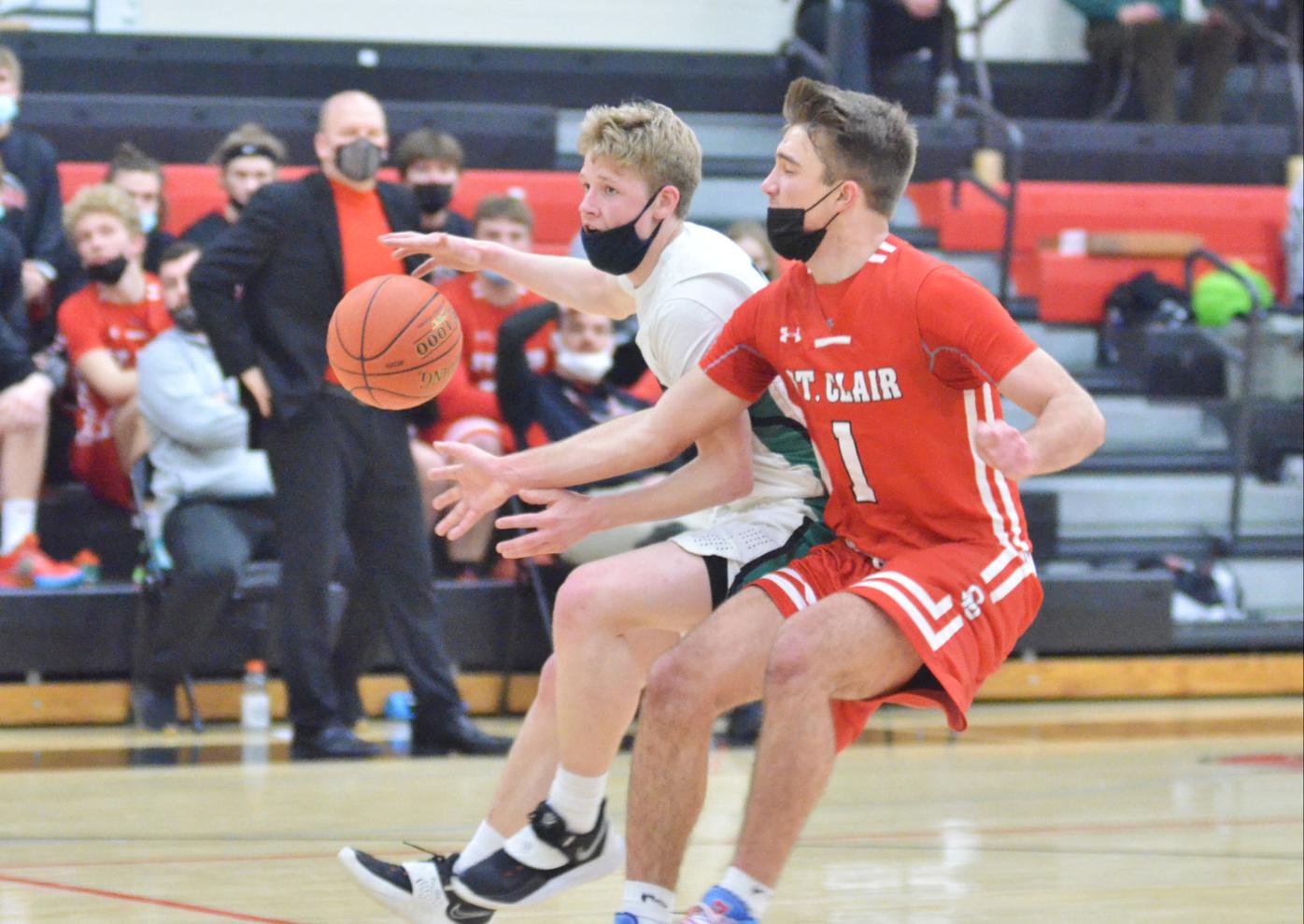 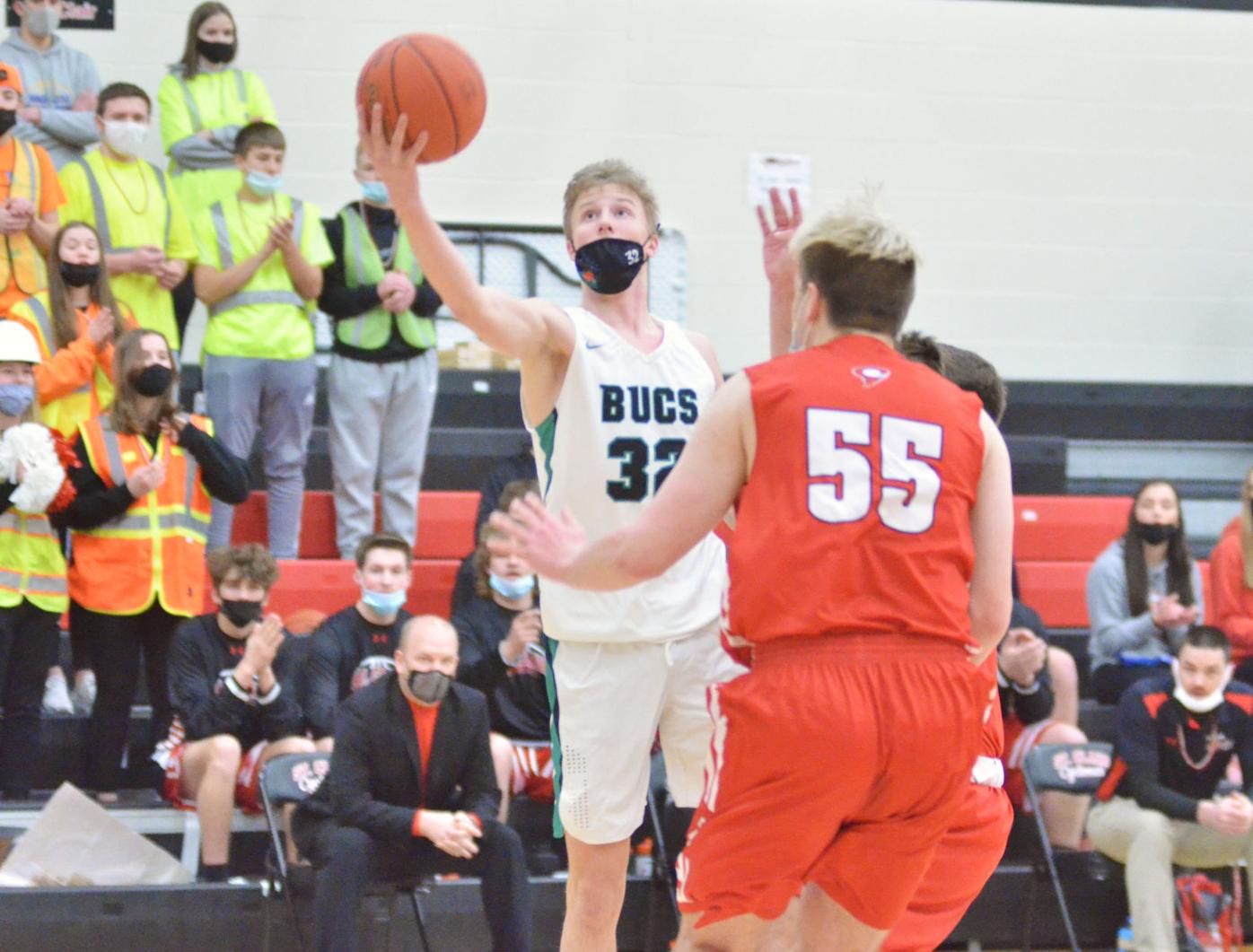 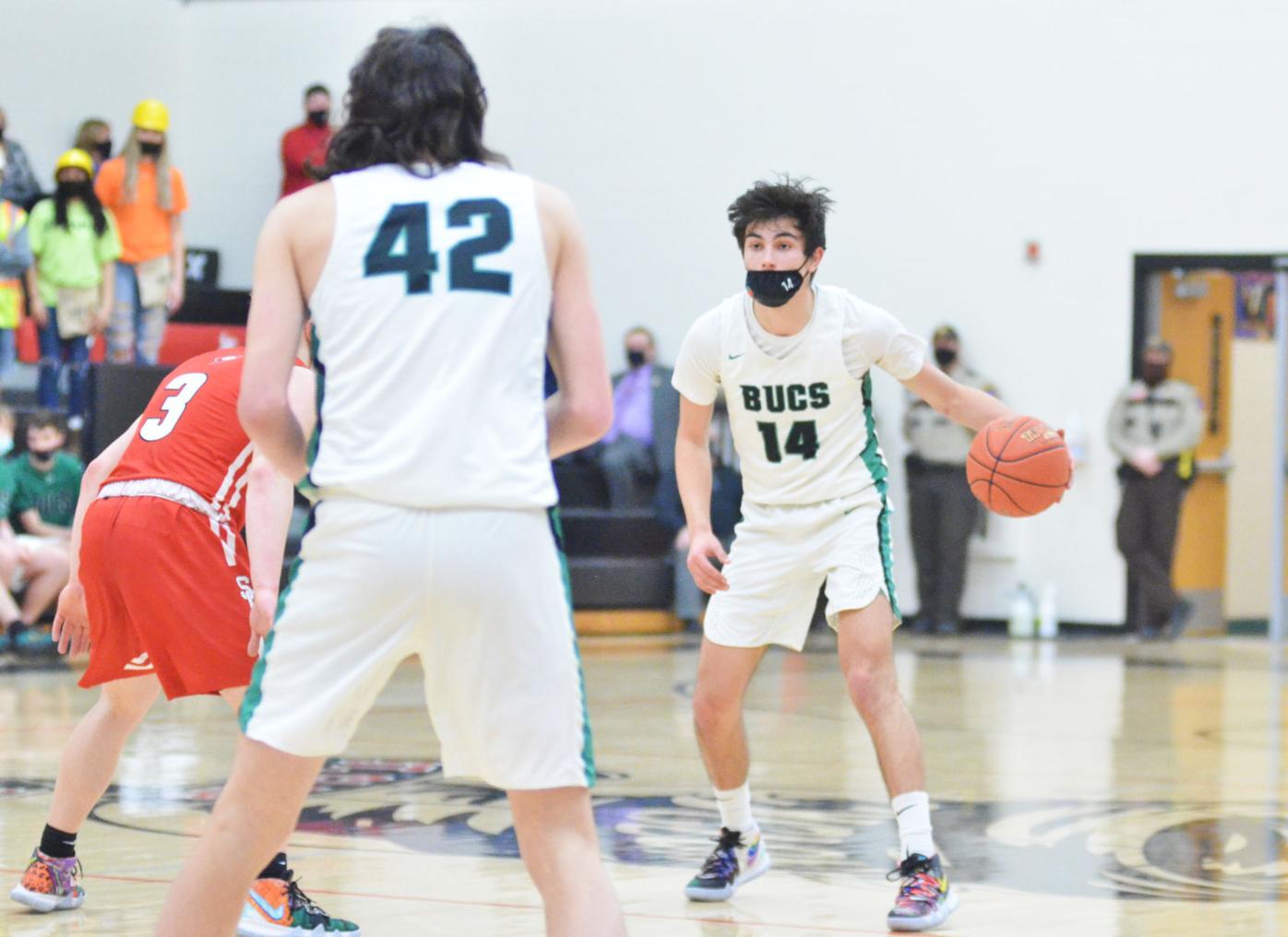 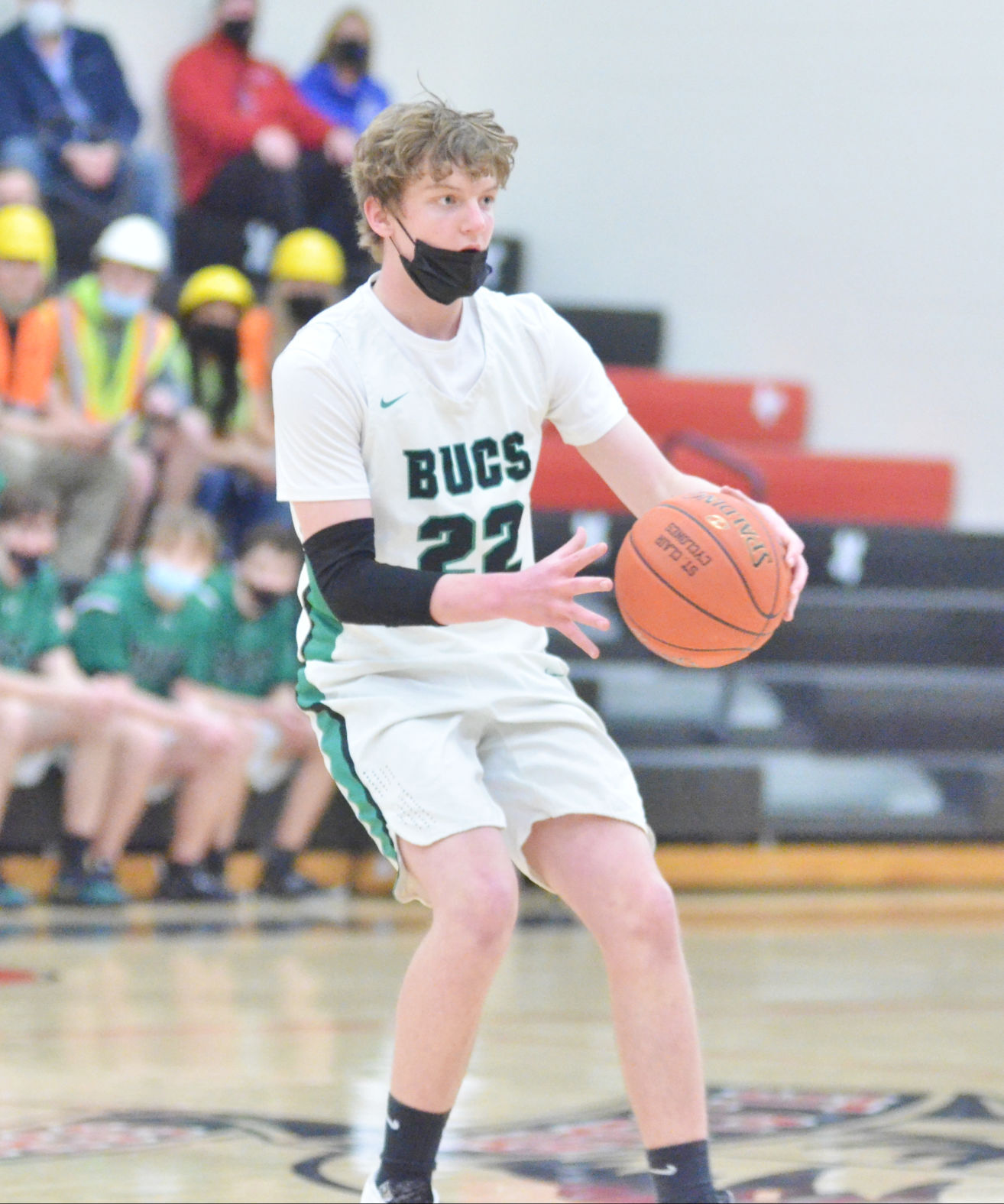 WEM’s Gabe Androli prepares to hand the ball off during Wednesday’s 75-64 double-overtime loss at St. Clair in the Section 2A South subsection championship. (Michael Hughes/southernminn.com) 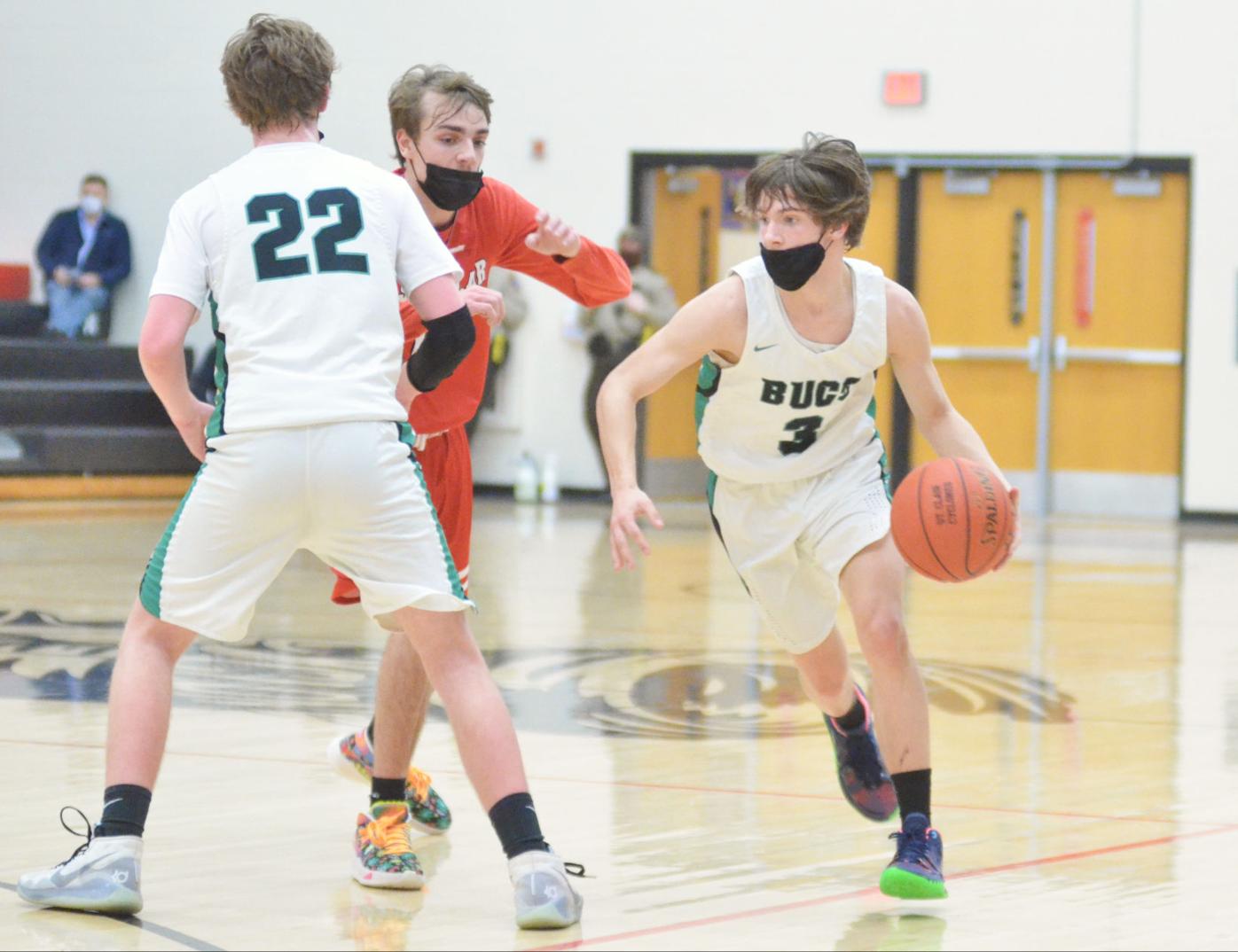 WEM’s Gabe Androli prepares to hand the ball off during Wednesday’s 75-64 double-overtime loss at St. Clair in the Section 2A South subsection championship. (Michael Hughes/southernminn.com)

The dream run for the Waterville-Elysian-Morristown boys basketball team came to a close Wednesday night.

After rattling off three consecutive wins in the Section 2A tournament, seventh-seeded WEM came up just short in a 75-64 double-overtime loss at top-seeded St. Clair in the South subsection title game.

That the Buccaneers reached that game, and had a shot to claim a subsection title, was remarkable in itself considering the team’s 1-4 start to the season as the young Buccaneers overcame adversity of varying degrees, from the graduation of seven seniors from last year’s team and a projected starter tearing his ACL during the football season.

The most challenging and heartbreaking was a teammate and friend dying in a car accident two weeks before practice was set to begin.

In the second game of the season, St. Clair blew out WEM by 30 points.

Gradually, the Buccaneers started to come together and emerge as a growing threat in the postseason over the back half of the season. Wins if five of the last six regular-season games vaulted WEM to a No. 7 seed in the subsection, when two weeks prior a first-round home game looked like it might be unattainable.

With that first-round home game, it beat Madelia 75-64. Then it upset second-seeded Mankato Loyola in overtime 50-47, and followed that up with another road playoff victory at Mountain Lake/Comfrey. After three playoff wins in five days, the Buccaneers had reached the subsection title game for a second consecutive season.

“I told those guys (Tuesday) in practice and last week that I’ve never been prouder of a group of guys in my life than those guys,” Wagner said. “They’re a heck of a group of kids, and for them to make those kinds of improvements show what kinds of kids they are, too, and what kind of people they are.”

After a fast start by the Cyclones built a 9-4 lead, the Buccaneers punched back to take a lead of its own before St. Clair nabbed a 31-29 advantage entering halftime.

The trio of senior Ethan Bartelt, junior Domanik Paulson and junior Brady Nutter carried WEM in the second half, combining to score every point until Jonathan Remme’s putback layup with 28 seconds left provided the Buccaneers a 52-51 lead. St. Clair hit a midrange jumper with 10 seconds remaining in regulation to surge back in front 53-52, before the Buccaneers split a pair of free throws with 4.1 seconds remaining to send the game to overtime.

In the first extra period, a midrange jumper from Bartelt, a 3-pointer from Nutter and a layup from Paulson put WEM in front 60-55, before St. Clair rattled off eight straight points to take a 63-30 lead. Paulson then split a pair of free throws with 33.3 seconds left, and then swiped a steal and converted a layup in transition with 23 seconds remaining to tie the game at 63 and force a second overtime.

In the second four-minute period, however, the Buccaneers ran out of gas, and the Cyclones accounted for 12 of the 13 points scored in the second overtime.

“They were very good,” Wagner said. “We turned the ball over a few too many times, but they also have great pressure so that’s expected in a way that you’re going to turn the ball over some. We hung in there pretty well. I thought we played for the most part a pretty good game. We defended hard, we made some shots, we missed some open shots, but all teams miss open shots and leave points on the board.”