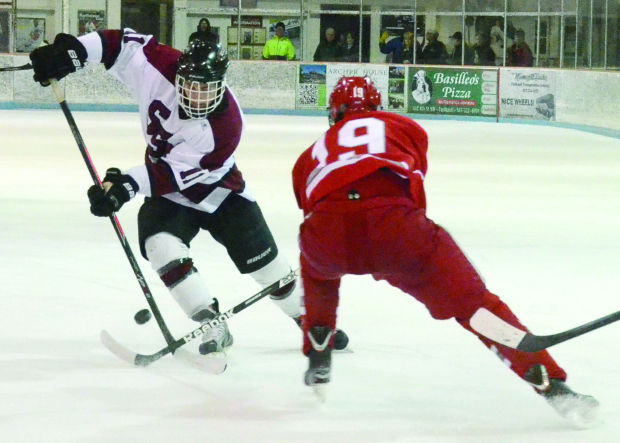 SSM's Ryan Norman fights for the puck during the first period against St. Andrew's on Saturday. The Sabres beat the Saints 5-4 on Saturday and 6-2 on Sunday. (Miles Trump/Daily News) 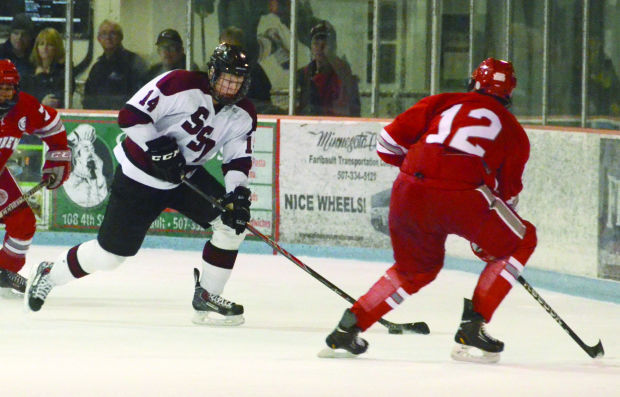 SSM's Ryan Norman fights for the puck during the first period against St. Andrew's on Saturday. The Sabres beat the Saints 5-4 on Saturday and 6-2 on Sunday. (Miles Trump/Daily News)

A late goal on Saturday gave the Sabres their first win of the weekend, and that propelled the Shattuck-St. Mary’s boys prep hockey team to another win on Sunday to sweep St. Andrew’s in a two-game series in the Old Rink.

“They were a very good opponent,” said SSM coach Tom Ward. “The game Saturday night was a really good hockey game up and down the rink. They took it to us for the first 10 minutes of the first period for sure, and as the game went on I think we got better and better and started to get more possession time with the puck.”

On Saturday, the Sabres trailed 2-1 after the first period but tied the game at 3-3 going into the second intermission. SSM gained a 4-3 lead and held it until the Saints scored with about two minutes left to tie it at 4-4, but Clayton Keller capitalized off a St. Andrew’s turnover and scored the game-winner with just 1 minute, 11 seconds to play. Jeremy Brodeur picked up the win in net.

The momentum carried over to Sunday, where the Sabres led 4-0 early and held on for a 6-2 win. Luke Kania got the start and earned the win. Complete statistics from the weekend were not available at press time.

Reach Sports Editor Josh Berhow at 333-3119, or follow him on Twitter.com @FDNjoshberhow