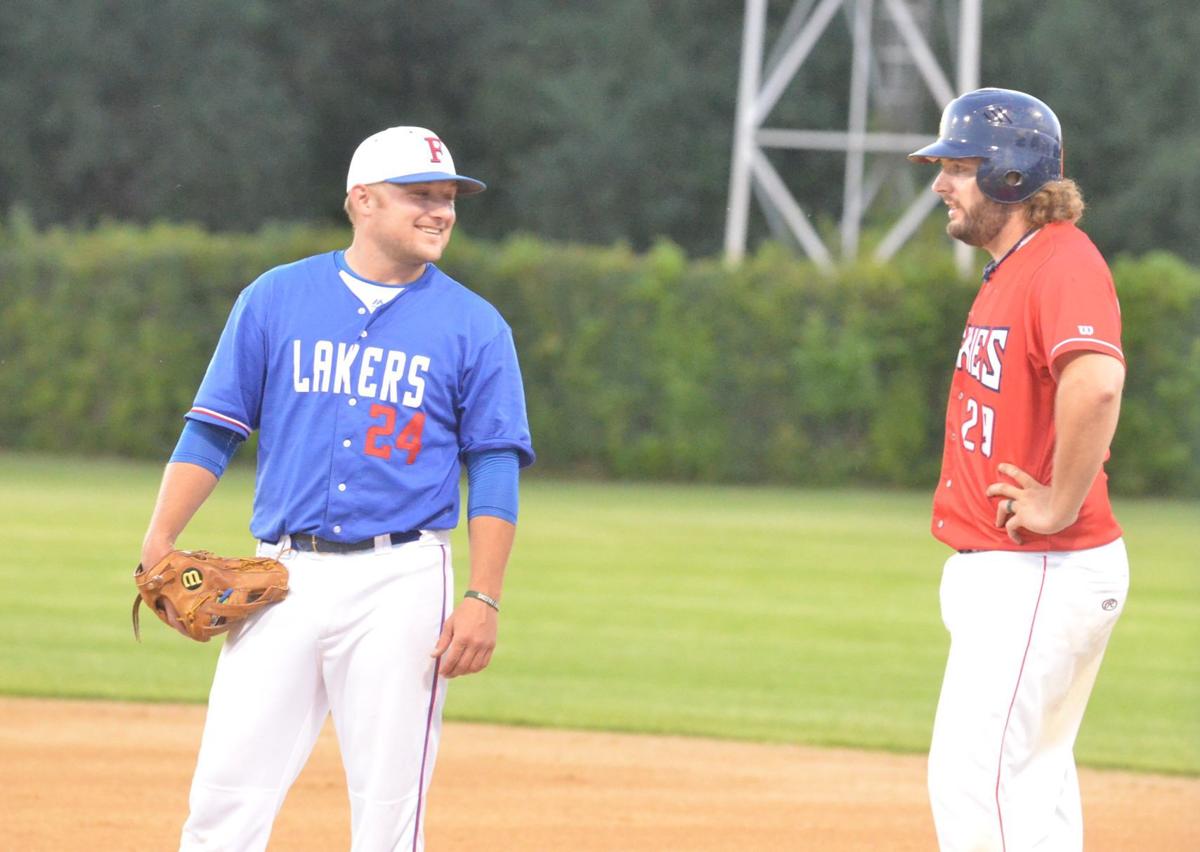 The Faribault Lakers’ Jake Stocker, left, talked with New Market Muskie Nate Rost during a game in 2018. With an abbreviated season, the typical DRS rivals might not play in 2020. (Daily News File Photos) 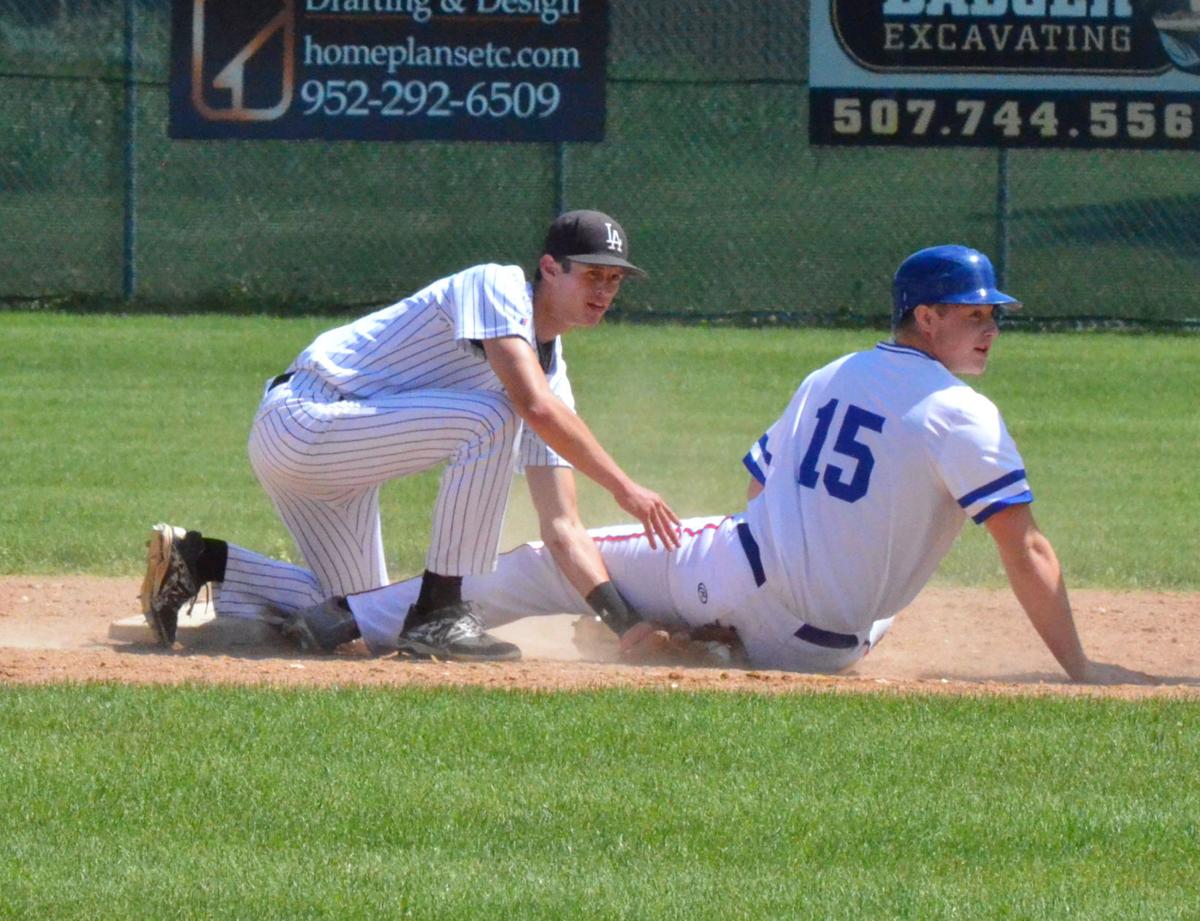 Faribault’s Austin Rendler was called safe while stealing second base against the Lonsdale Aces in 2018. The Lakers and Aces are waiting to find out if they can compete against each other in the DRS and Region 3C, although steals and tag plays might not be allowed due to social distancing guidelines.

The Faribault Lakers’ Jake Stocker, left, talked with New Market Muskie Nate Rost during a game in 2018. With an abbreviated season, the typical DRS rivals might not play in 2020. (Daily News File Photos)

Faribault’s Austin Rendler was called safe while stealing second base against the Lonsdale Aces in 2018. The Lakers and Aces are waiting to find out if they can compete against each other in the DRS and Region 3C, although steals and tag plays might not be allowed due to social distancing guidelines.

In the nascent days of COVID-19 affecting life across the world, country and state, sports leagues quickly put their seasons on the shelf.

For the Minnesota Baseball Association, which generally starts in late April and early May, that need wasn’t as pressing. So as Sticha, the league president for the Dakota, Rice, Scott (DRS) League, mapped out how a truncated schedule might look, even his projections weren’t severe enough.

“We all thought that July 1 was the latest we could start,” Sticha said. “We thought, ‘There’s no way this can go this late, into July, without playing.’ Now it’s becoming real, where maybe we don’t get to start July 1 and maybe it’s not until mid-July.”

After the latest announcements from Minnesota Gov. Tim Walz last Friday, many in the Minnesota amateur baseball community were left with questions about when a 2020 season might start if it’s able to start at all. The state of Minnesota deemed baseball a “medium-risk” sport, meaning any potential games are still tabled for an undisclosed amount of time, although practices in small groups have been permitted for the past couple weeks.

The state board for the MBA is continuing to lobby state representatives to urge Walz to make an exception for baseball to resume as early as in the next week or two.

That brings Sticha’s second and third projections into play.

“This puts us now at the June 15 date and July 1 date as possibilities,” Sticha said. “In both of those models and templates, we would shift from playing every team twice in the season like we typically do to just once. As we get deeper into the summer and we don’t start until July 1, we may forego playing our Class B teams.”

If the start to the season is pushed back July 1 — a possibility Sticha said at first didn’t cross his mind, and later believed was a death sentence for the 2020 season — any of his contingency plans are unusable since the Region 3C playoffs typically start in late July.

As of now, Sticha said he’s been in contact with someone from the MBA state board every few days to receive updates and exchange ideas for how to best maintain some normalcy for how the 2020 season plays out.

If the MBA remains committed to sponsoring a season, and most importantly a state tournament, Sticha said he will do everything he can to have the traditional four teams emerge from Region 3C to the state tournament.

Ideally, he said, there’s a balanced regular season to seed the region playoffs as fairly as possible, but Sticha said he and the DRS will do what they need to in order to stage those region playoffs.

“We would still have all our playoff and region games to see who would go to state,” Sticha said. “State is still kind of the intended goal.”

Season started by June 15: The DRS is still able to hold a league schedule that includes the league's two Class B teams, the Elko Express and New Market Muskies, although each team will likely play their league mates only once instead of twice.

Season started by July 1: The DRS is able to hold a partial league schedule, but will likely need to eschew the Class B teams in order to stage enough games between region opponents, and to allow Elko and New Market to do the same with their section opponents. The Class C teams will likely play each other once in this timeline as well.

Season started in mid-July: If a version of the 2020 regular season that starts this late is possible, it will likely need an abundance of creativity. There will not be enough time for each of the Class C DRS team to play each other once, making the seeding of the Region 3C playoffs difficult.