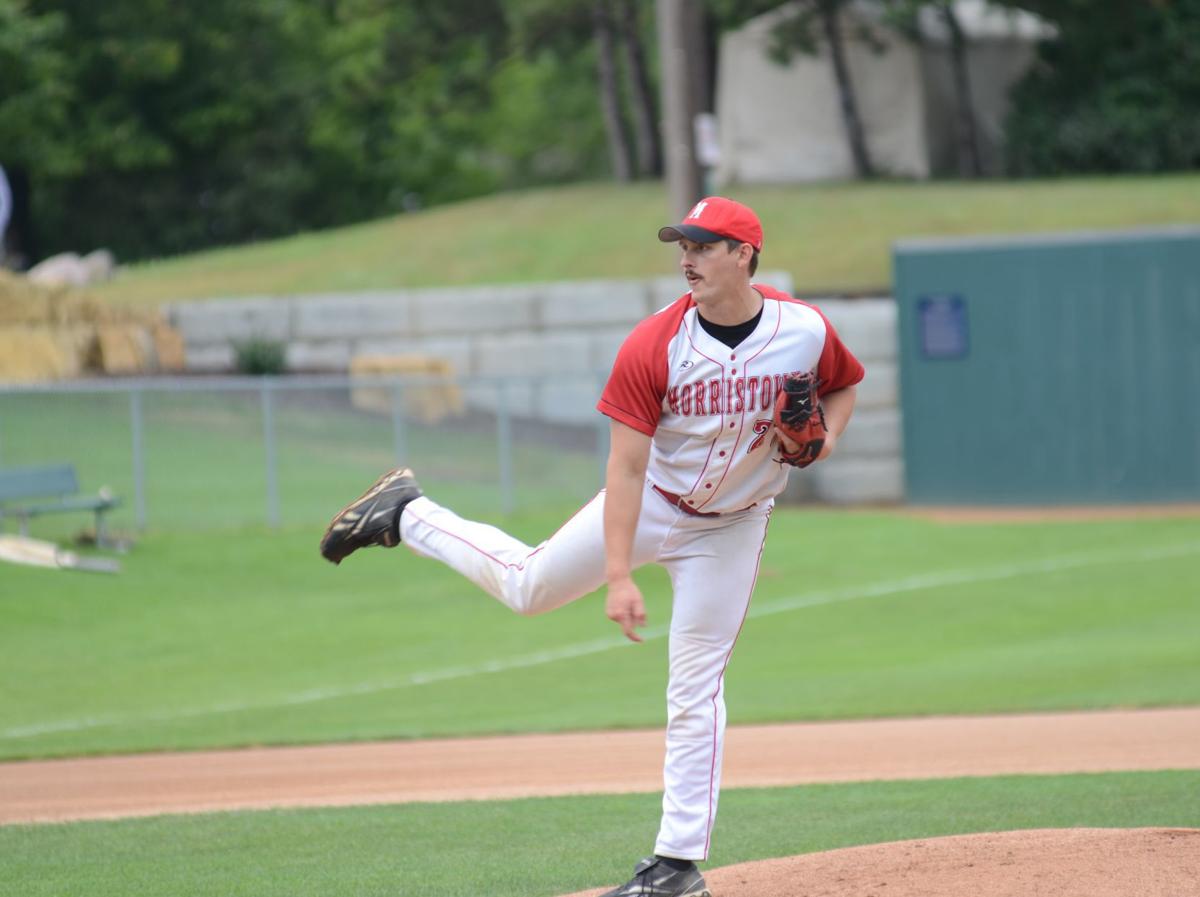 Morristown’s Matt Saemrow pitched 11 innings across two Region 6C playoff games Saturday, picking up a save and a win in the process. (Photos by Mike Randleman/Faribault Daily News) 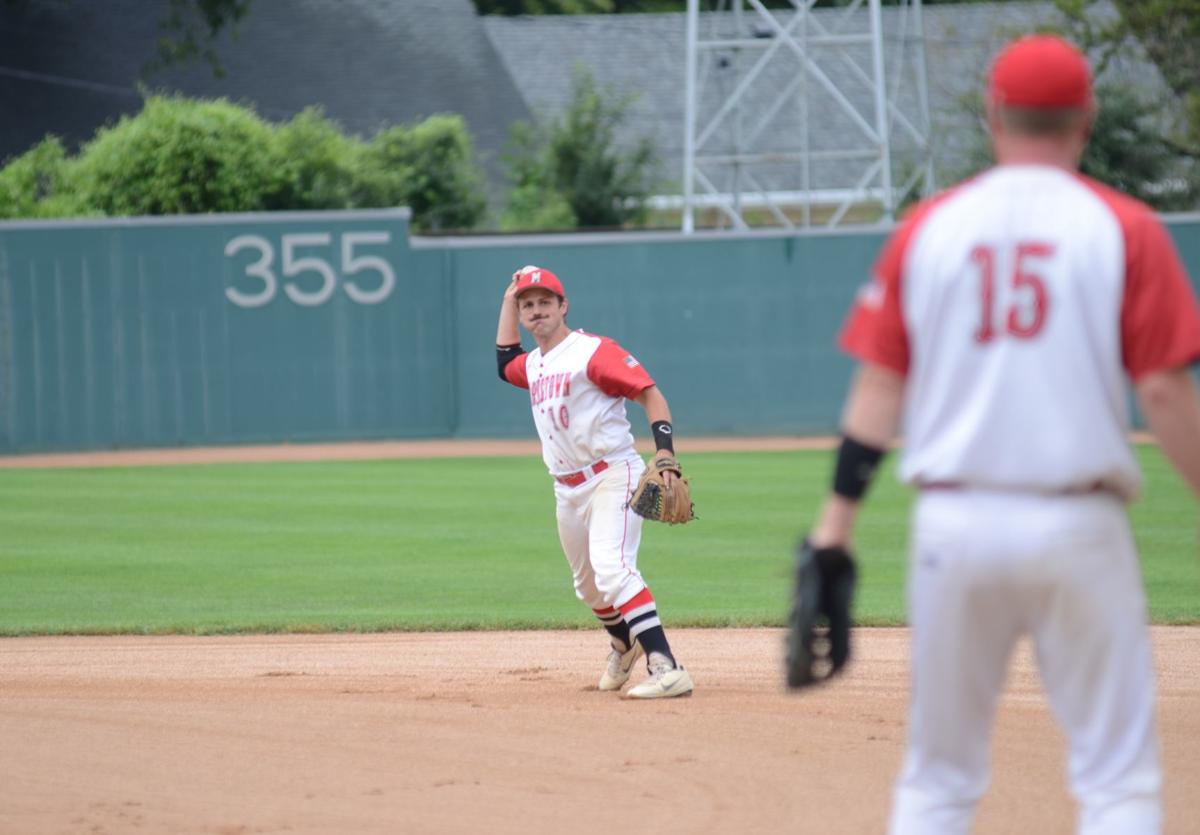 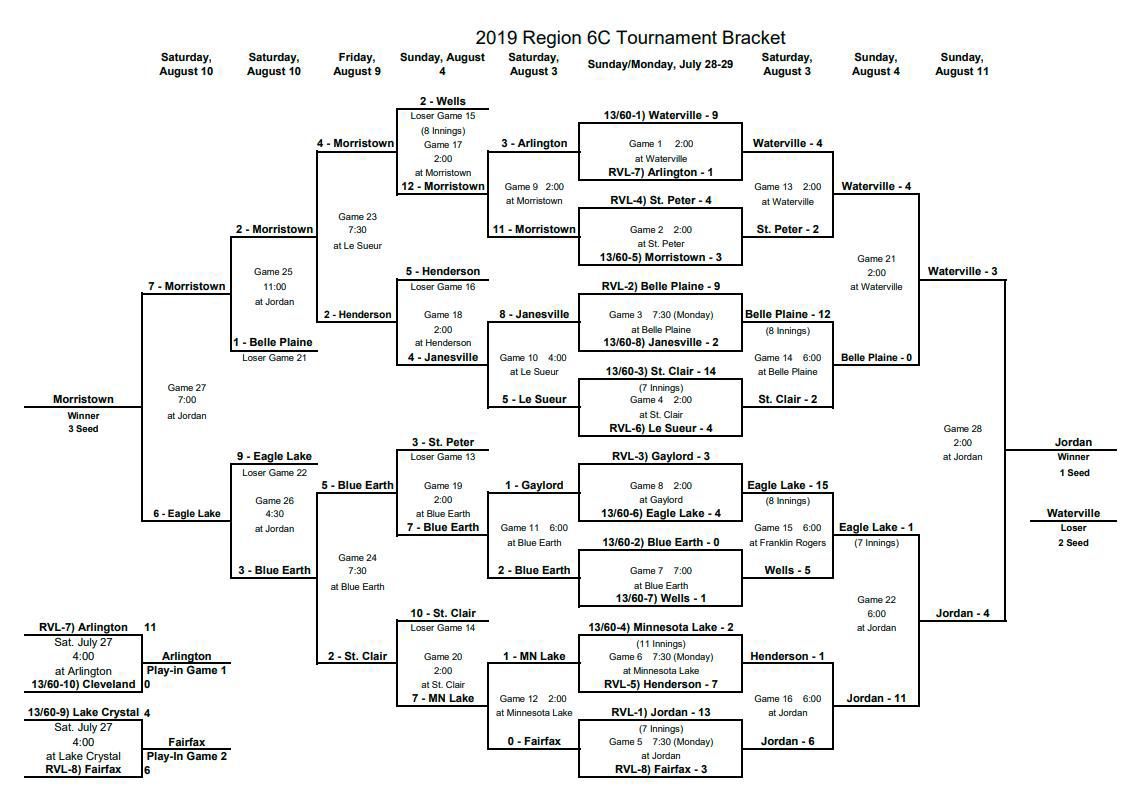 Morristown’s Matt Saemrow pitched 11 innings across two Region 6C playoff games Saturday, picking up a save and a win in the process. (Photos by Mike Randleman/Faribault Daily News)

After losing in round one of the Region 6C amateur baseball playoffs in walk-off fashion, the Morristown Morries battled back to win five straight elimination games over eight days to earn the region’s third and final spot to the Class C state tournament.

The run to the team’s first state appearance in over 30 years culminated Saturday with a 2-1 win over the Belle Plaine Tigers and a 7-6 win over the Eagle Lake Expos.

Morristown took advantage of three Tiger errors in the first three innings to scratch a 2-0 lead against left-hander Nathan Herman who entered with a 6-0 record and just over a 2 earned run average.

Meanwhile, Tate Harmon was pitching a gem for Morristown. He worked out of runners on second and third base in the fourth and finished 6⅔ innings for the win.

Belle Plaine got on the board in the fifth on a Tyler O’Brien one-out double.

Hits were squared at three after five.

Morristown coaxed a double play in the sixth while it squandered its own chance with runners on in the top of the seventh.

Belle Plaine threatened against reliever Matt Saemrow in the seventh but was held down again.

In the bottom of the eighth, Belle Plaine put runners on first and second with one out. Matt Schultz struck out on a controversial check swing, which resulted in the ejection of a Belle Plaine bench player for arguing the call.

Saemrow got the next batter on a curveball and avoided the jam.

Landon Harmon led off the top of the ninth with a double, which prompted Herman’s departure in favor of Derek Dahlke who navigated out of the inning.

On a rainy day at the Mini Met in Jordan, play was halted for over two hours before the bottom of the ninth.

Saemrow waited out the delay and pitched an adventurous 1-2-3 inning for the save.

He hit the first bitter on a 2-2 count, but it was ruled the batter did not attempt to get out of the way and was brought back to the box. He struck out on the next pitch.

With two outs, a lazy pop fly in first base side foul territory was dropped.

The inning ended without damage and Morristown’s season continued on.

The Morries sat back and watched as fellow 13/60 League team Eagle Lake downed the Blue Earth Pirates 9-3 in the following elimination game from Jordan.

Morristown split with Eagle Lake in the regular season, losing 11-1 and winning 11-0 in a June 8 doubleheader in Morristown.

The first two innings flew by without a scoring threat.

Morristown had a chance in the third but could not advance runners on first and second base with a bunt and later squandered a chance with runners on second and third.

The Expos failed to cash in with bases loaded in the fourth. The Morries made that pay.

Eagle Lake unraveled in the field, including with two errors at shortstop, to allow Morristown to plate three unearned runs.

The Expos responded by manufacturing two runs in the fifth and again plated two in the sixth to take their only lead.

Landon Harmon lined a one-out double to the fence. Another run came in on a ball to the backstop and Ben Lamont brought in a run when he was hit by a pitch with the bases loaded.

Blake Altermatt relieved Johnson on the mound. A passed ball scored the fourth and final Morries run of the inning.

Altermatt was otherwise effective in limiting Morristown in 2⅔ innings.

The Morries’ infield, particularly Ben Lamont at shortstop, was sharp throughout the weekend and turned another double play in the seventh.

Moving to the eighth, Eagle Lake regained some momentum when Altermatt snuck a two-run home run down the left field line over the 310-foot fence. Tyler Smithwick followed with a double but was left stranded.

Morristown went down quietly in the eighth, but so did Eagle Lake in the ninth.

Saemrow struck out the side all on curveballs, making Expos hitters look silly.

Celebration ensued as Morristown will head to the 48-team state tournament, which begins next weekend at host sites Delano, Maple Lake and Dassel.

The Jordan Brewers beat the Waterville Indians 4-3 on Sunday to claim the top seed out of the region to state. Waterville got the second seed.

Morristown draws the second seed out of Region 1, the Isanti Redbirds, in a 7 p.m. game Saturday at Delano Municipal Baseball Park. Game time is subject to change as three games are scheduled prior beginning at 11 a.m.

The Morries selected three players in the Region 6C draft, which allows teams advancing to state to select three pitchers from non-advancing teams. Morristown selected TJ Nowak and Josh Cook from the Minnesota Lake Royals and Lee Hodges from the Blue Earth Pirates.

The end of Henderson

The Morries began the weekend Friday when they won their second straight elimination game, knocking off the River Valley League No. 5 seed Henderson Tigers 4-2 Friday night in Le Sueur.

The host Tigers were the better team early on, but could not take a lead in a scoreless game.

Henderson threatened with runners on first and third base in the bottom of the second with one out. Vollbrecht induced a double play on a tight play at first met with disagreement from the Tigers’ side.

Morristown went down 1-2-3 in the first, third and fourth innings and did not get a hit off Luna until Kyle Green’s one-out single to left in the fifth. Green moved up a base on a pitch to the backstop and came around for the first run of the game on a two-out double by Tate Harmon.

Henderson surged ahead in the bottom half. With two outs, Zach Steuck hit a flair that landed in front of the second baseman in the infield for a hit on an in between play. John Parker followed with a double to right center field. It would’ve scored Steuck and perhaps been a triple, but the ball was caught in the outfield ivy and ruled a ground rule double. The Morristown outfielders threw their arms up to signal a lost ball, prompting the infield umpire to run out to the fence to make the ruling. The two runners who came in to score were brought back.

With runners on second and third, Greg Graham hit a two-RBI single down the right field line.

Vollbrecht was effective getting out jams for most of the night and kept the rally to two runs.

Morristown responded with three runs in the top of the sixth to force Luna out after 5 ⅔ innings.

Ben Lamont led off the inning with a triple to the fence and came around to score on the play on an errant throw into the third base side dugout.

With two outs, Vollbrecht helped his cause with a single to put runners on the corners. Vollbrecht stole second and came in to score along with Bradley Van Deinse on a two-RBI single from Green. Adam Arnst came in for relief of Luna after Green’s hit. He held the Morries scoreless to keep the Tigers within striking distance.

The momentum on the Tigers side through the first five innings shifted in the Morries’ favor.

Henderson threatened with runners on first and third in the seventh inning. The Tigers were set down in order in the eighth and ninth.

Both teams finished with eight hits and no errors.

A light rain fell for the last six innings, but never significantly enough to noticeably affect the game on an otherwise cool, comfortable night for baseball at Bruce Frank Field.

Henderson could not play at its home field, which does not have lights.