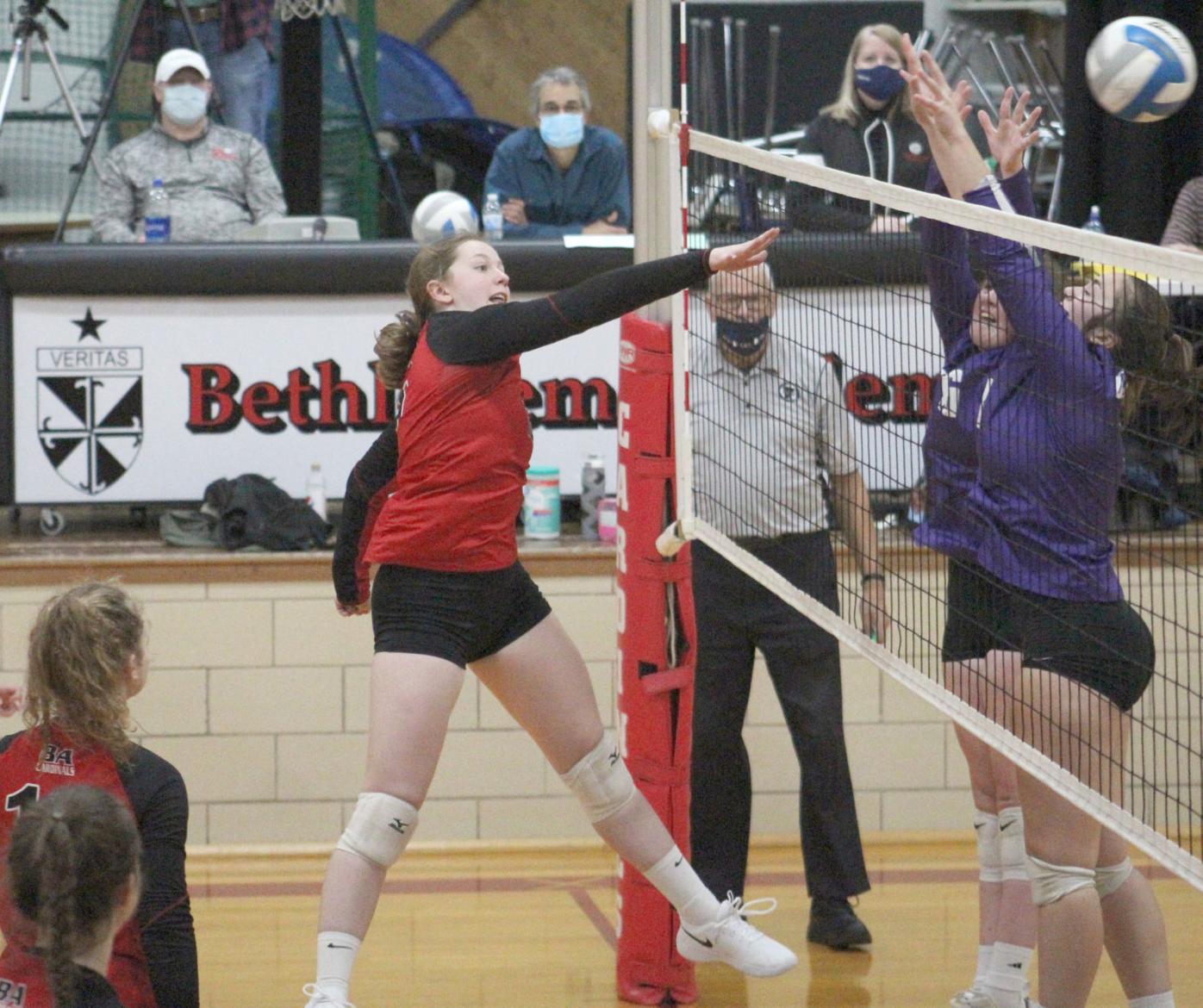 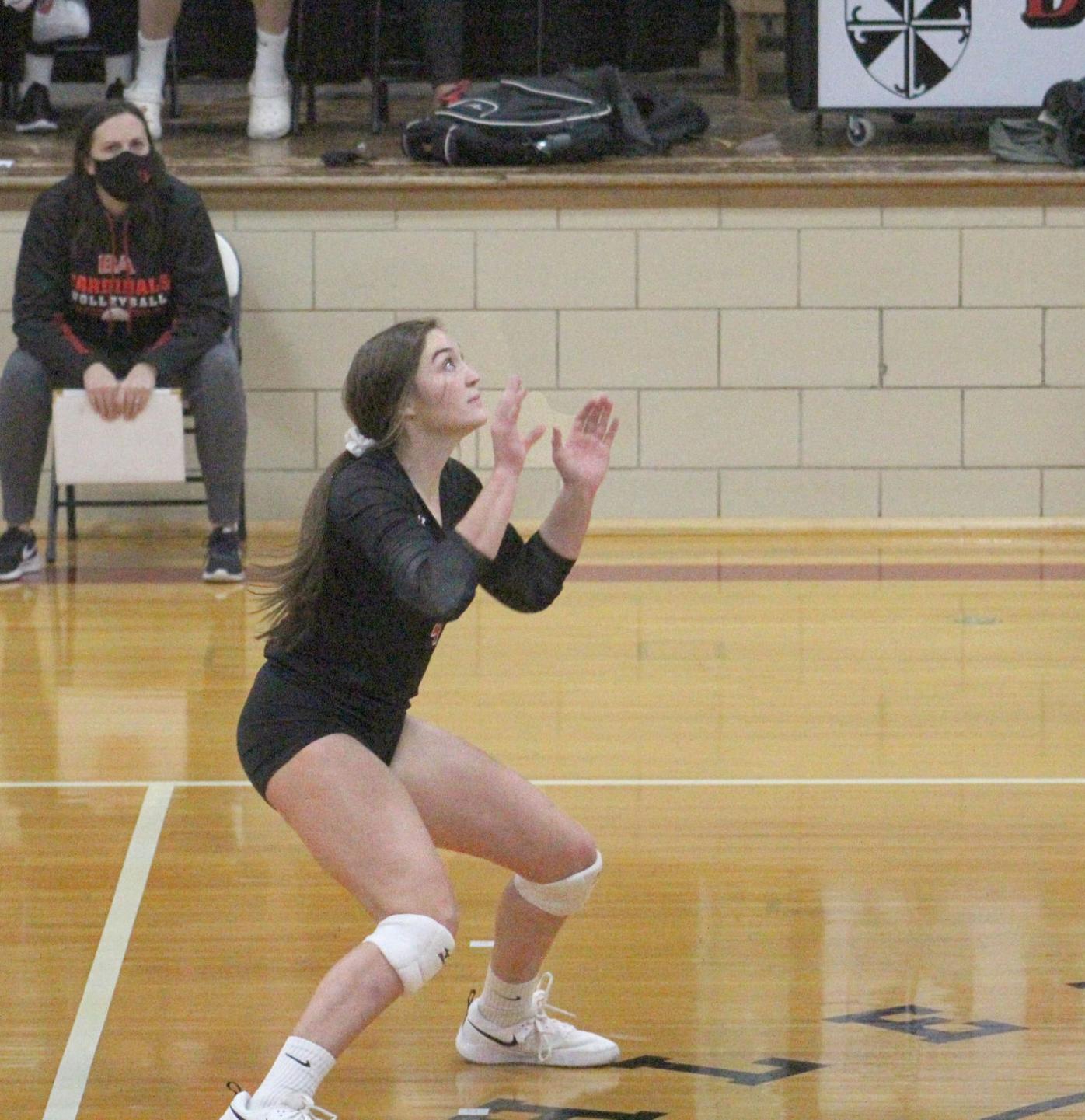 The Cardinals continued to roll with the ever-changing schedule. Bethlehem Academy coach Chris Bothun said the two seniors helped create a hard-working, positive attitude for the rest to follow.

“We’ve really stressed not letting a point get us down,” Bothun said. “Even when we dropped one of the sets, let’s get back out there.”

The leadership displayed by the seniors is mostly found on the court. Radatz plays determined never to give up on any ball near her. Tutak leads the front row in blocking and also provides a second option for kills.

Had the season been under normal circumstances or continued to section play, Radatz likely would have reached the 1,000 career dig milestone.

Tutak said they’ve missed out on some things, but that this season has made her used to all the changes.

“We just try to take every opportunity we get,” Tutak said. “We didn’t get to play outside of our conference much other this than this game and (Waseca). So we didn’t get much of a variety there, but we still tried to make the best of it and win all the games we could.”

The goals changed from wanting to improve to winning in sections to winning the Gopher Conference. Without a doubt, the Cardinals improved. They lost a total of seven sets to date, are 9-1 overall and will finish second in the conference behind undefeated Waterville-Elysian-Morristown.

Collectively, the team did as much as it could to prepare for the season. Radatz said the team hung out as best it could and just tried to continue to improve on the court.

“We played sand volleyball,” Radatz said. “We’ve done it in the past, we did more of it this year because had more time to do it.”

Tutak and Radatz each agreed, this season has been the best for each of them individually and as a team on the court.

“They took advantage of every practice we get and of every game we get,” Bothun said. “They encouraged the others to do the same...The underclassmen, I think they look up to them. I think they look to them for leadership and they’ve stepped up into that role really well. They’ll be a great loss next year.”

The Cardinals continued to play at a level they have come expect this season. After a shuffle of the schedule, the Cardinals got off to a good start against last-minute opponent Goodhue.

The second set was close as well, but it was the Wildcats that led for most of the set. Trailing 21-18, the Cardinals forged ahead to win 25-23 thanks to a 7-2 run.

After a back-and-forth third set which the Wildcats won 25-19, the Cardinals used its serving to get ahead. The Wildcats seemingly fell apart; making mistakes they hadn’t had much of in each of the previous three sets. Continuing to position themselves well defensively, the Cardinals won the fourth set 25-11 with ease.

Tutak and Radatz led the way. The Cardinals didn’t just rely on them, however. They received contributions up and down the lineup.

Kate Trump led all servers with four aces and recorded a team-high 15 kills. Ellie Cohen had nine kills. Right behind her was Lindsay Hanson with eight kills.

As previously mentioned, the Cardinals positioned themselves well defensively. It gave them time to set up their offense, but also made it more difficult for the Wildcats to earn their points.

Including Radatz, five Cardinals ended the night with double-digit digs. Mia Potter had 19, just ahead of Cohen with 18. Trump tallied 14 and Reagan Kangas finished with 13.

Bethlehem Academy wraps up the season with a road game against New Richland-Hellena-Ellendale-Geneva Friday.