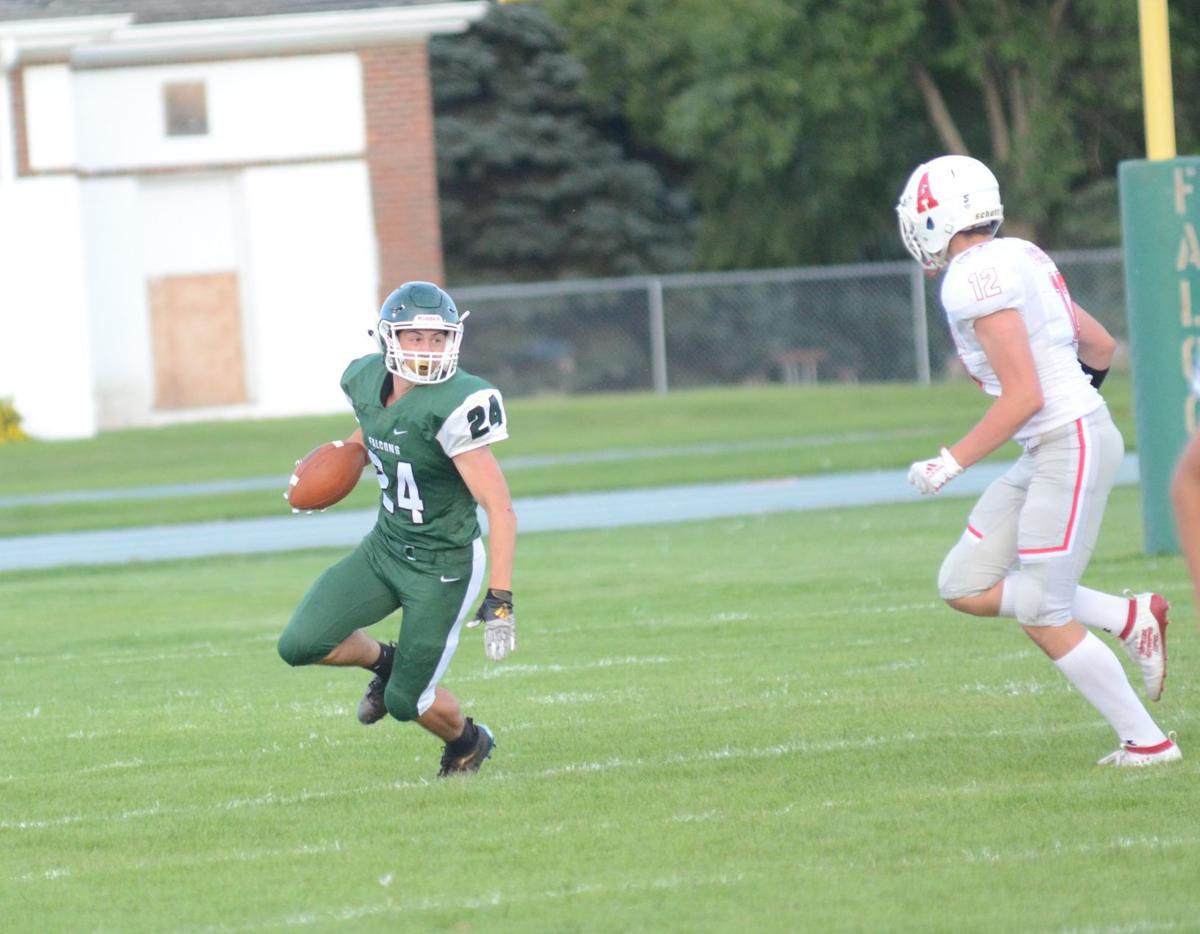 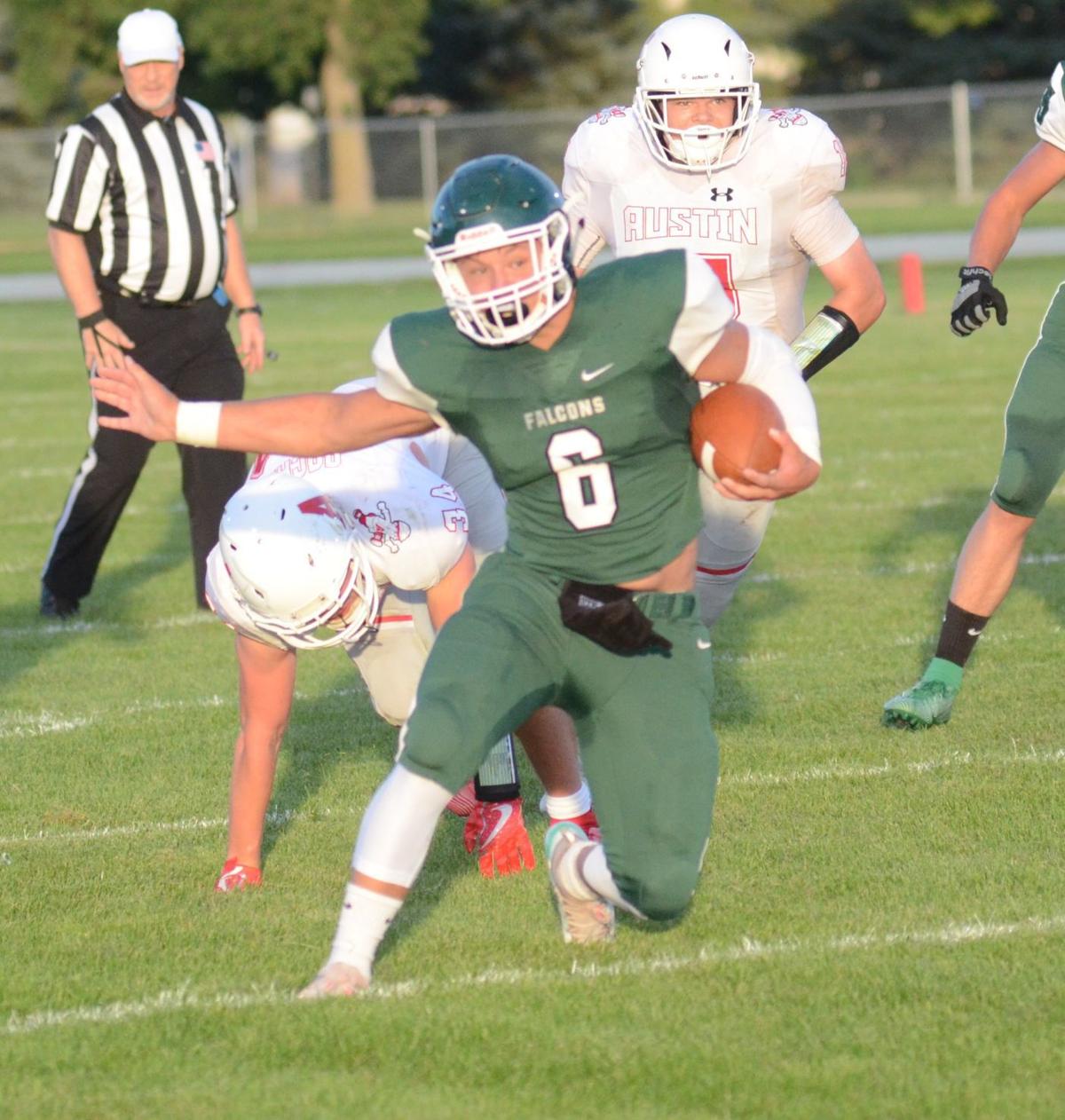 No one has driven the length of the field against the Faribault defense through two weeks.

However, points count the same regardless of level of difficulty. That’s a lesson the Faribault Falcons (0-2) are learning the hard way after a 38-6 loss Friday at the Class AAAA No. 3 Winona Winhawks (2-0).

Two first-half turnovers and a losing battle in the field position battle aided a big, talented Winona offense that needed no help going in.

“We hung in there,” said Faribault coach Ned Louis, “but to compete with a team like that you have to make them drive the length of the field.”

The Winhawks were held to a field goal on a drive spanning 60 yards and over five minutes.

Considering Winona’s prolific offense that scored 30 points in the first half last week against Albert Lea, that was a win for the Faribault defense to hold strong at its 4 yard line.

Trevor Pomeroy had 47 of his game high 157 yards in the first series for Winona. Pomeroy surpassed Winona’s previous school career rushing record of 2,184, which stood since 1988.

Bryce Nolen began the game at quarterback for Faribault as part of a rotation with Nick Ehlers.

Nolen found wide receiver Nick Flom for nine yards on 3rd-and-8. Another small jolt of confidence for the upset-minded Falcons.

The Winhawks jarred the ball loose on a rush attempt and recovered at the Faribault 32.

Faribault forced a pair of incomplete throws from athletic senior quarterback Jackson Nibbelink before he found Austin Mlynczak for a 37-yard touchdown on 3rd-and-10.

Winona graduated almost all of its receiving production from 2018. This group wasn’t called on much as Nibbelink ended the night 5-for-10 passing for 94 yards, two touchdowns and no turnovers. Mlynczak had three catches.

Nolen found Lippert on the ensuing drive for a 10-yard first down completion to get some breathing room after starting on Faribault’s own 10.

The Falcons would have to punt from their 21 and gave the Winhawks starting position at the Faribault 38.

A poor kick return started Faribault at its 14. A defensive pass interference penalty moved Faribault up, only for another fumble to derail progress.

Both fumbles were recovered by 6-foot-6, 230-pound defensive end and University of Wisconsin commit, Aaron Witt.

Winona took three plays to travel 11 yards ending in a Pomeroy touchdown to go up 24-0.

Faribault went 3-and-out but got a spark from an ensuing interception by AJ Worrell to negate a scoring threat.

Backed up deep again at their 10, the Falcons were forced to punt at their 11.

Winona had another crack starting in plus-territory at the 44. Pomeroy ran all four plays on the drive, cashing in a two-yard rush to make it 31-0 in a score that froze for the 4:14 until halftime.

“They’ve got some hard runners,” Louis said. “They’re big and strong up front, they’ve got a good quarterback and are senior dominated. Ten starters were seniors.”

Pomeroy remained in the game for Winona’s first series of the game in order to break the record at home on Paul Giel Field.

The team’s bell cow ran five times in a row with rushes of 21 and 22 yards preceding a two-yard touchdown to get the record and usher out Winona’s starters for the night.

His record is partially a testament to Winona’s monstrous offensive line, that stacks up with any, size wise, in the state.

“Those guys have some Division I and Division II offers,” Louis said. “They’re really good.”

Faribault was without a couple linemen due to injury who are expected to be back to contribute later this fall.

Ehlers was under center for the second and fourth quarters. He got Faribault on the board by finding Taylor Day for a 33-yard touchdown pass midway through the fourth. The extra point kick failed.

Faribault returns home 7 p.m. Friday to face the Byron Bears (1-1). Byron lost 28-20 at home to New Prague in week 1 and edged Plainview-Elgin-Millville 27-26 at home on Friday.