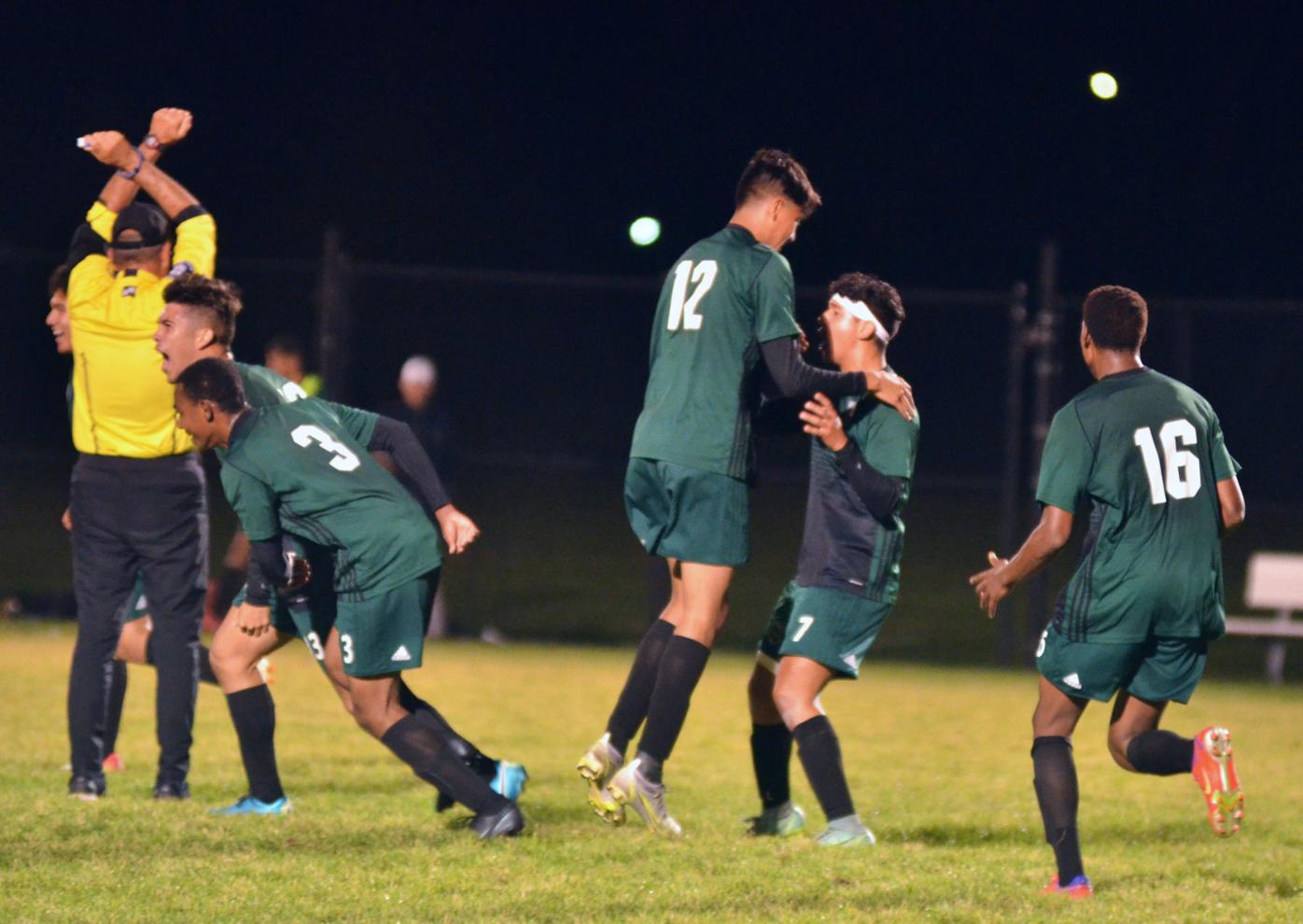 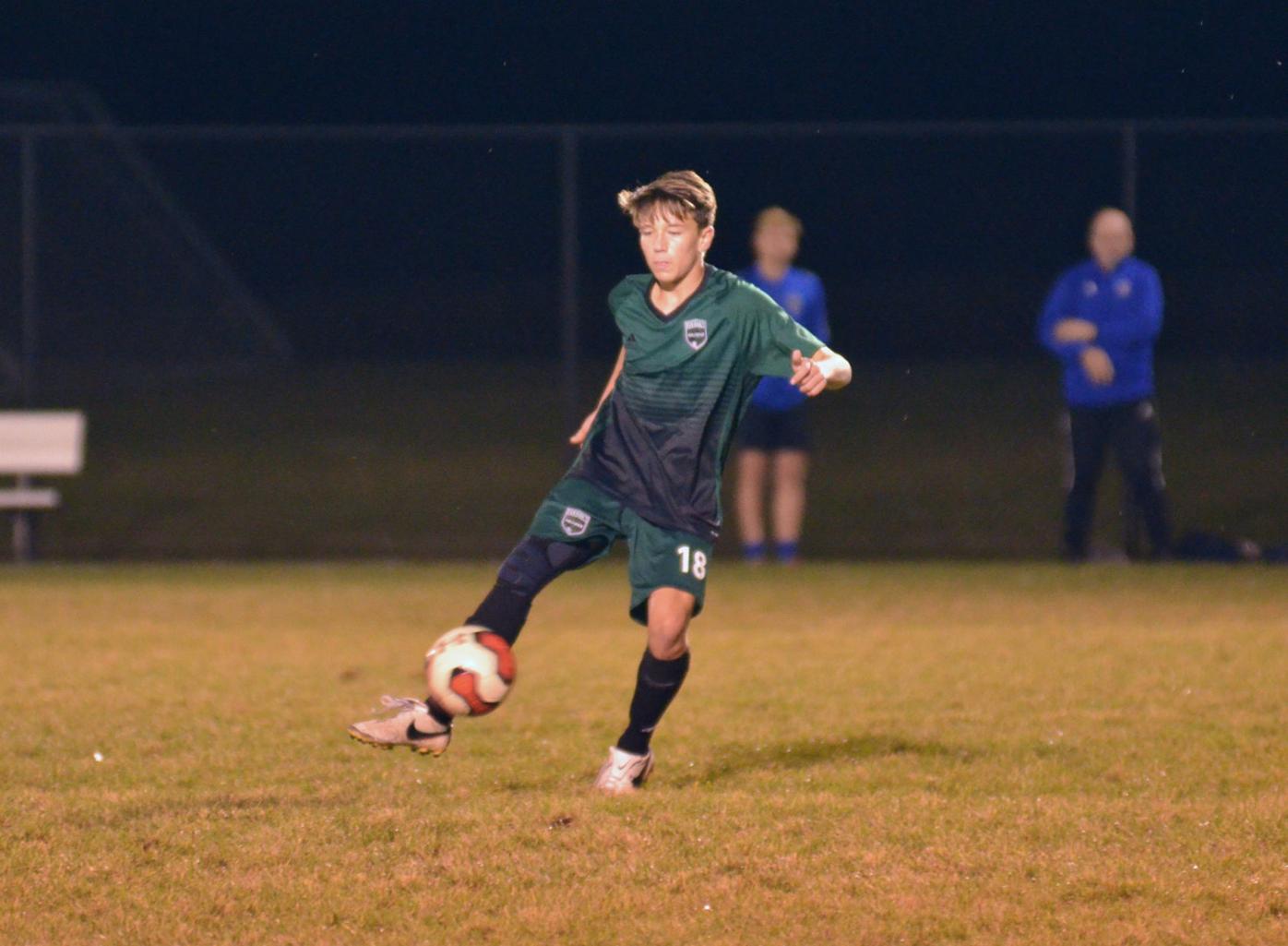 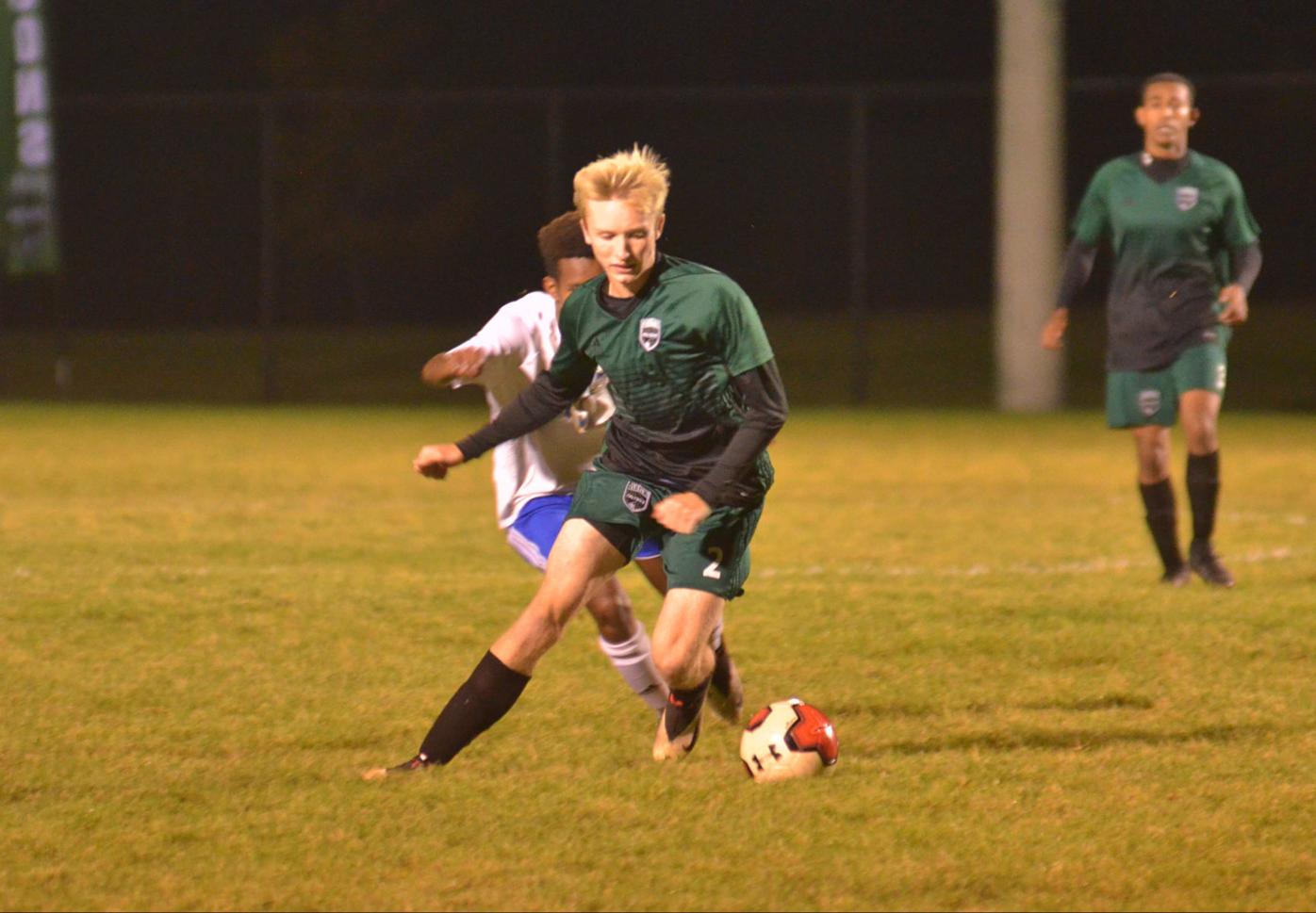 Faribault senior Henry Schonebaum cuts away from a Waseca defender during Tuesday’s 2-1 victory in the Section 1AA quarterfinals at the Faribault Soccer Complex. (Michael Hughes/southernminn.com) 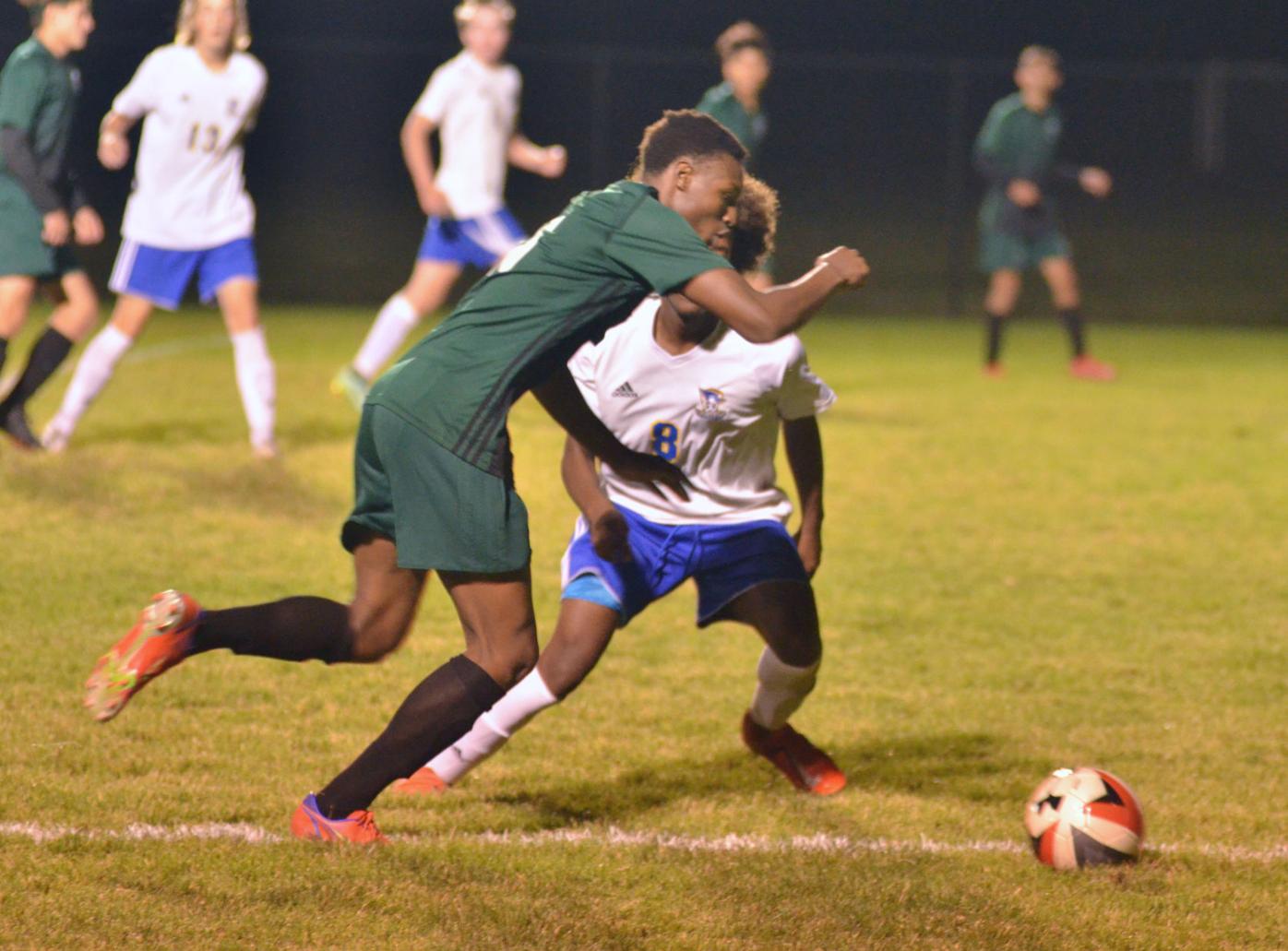 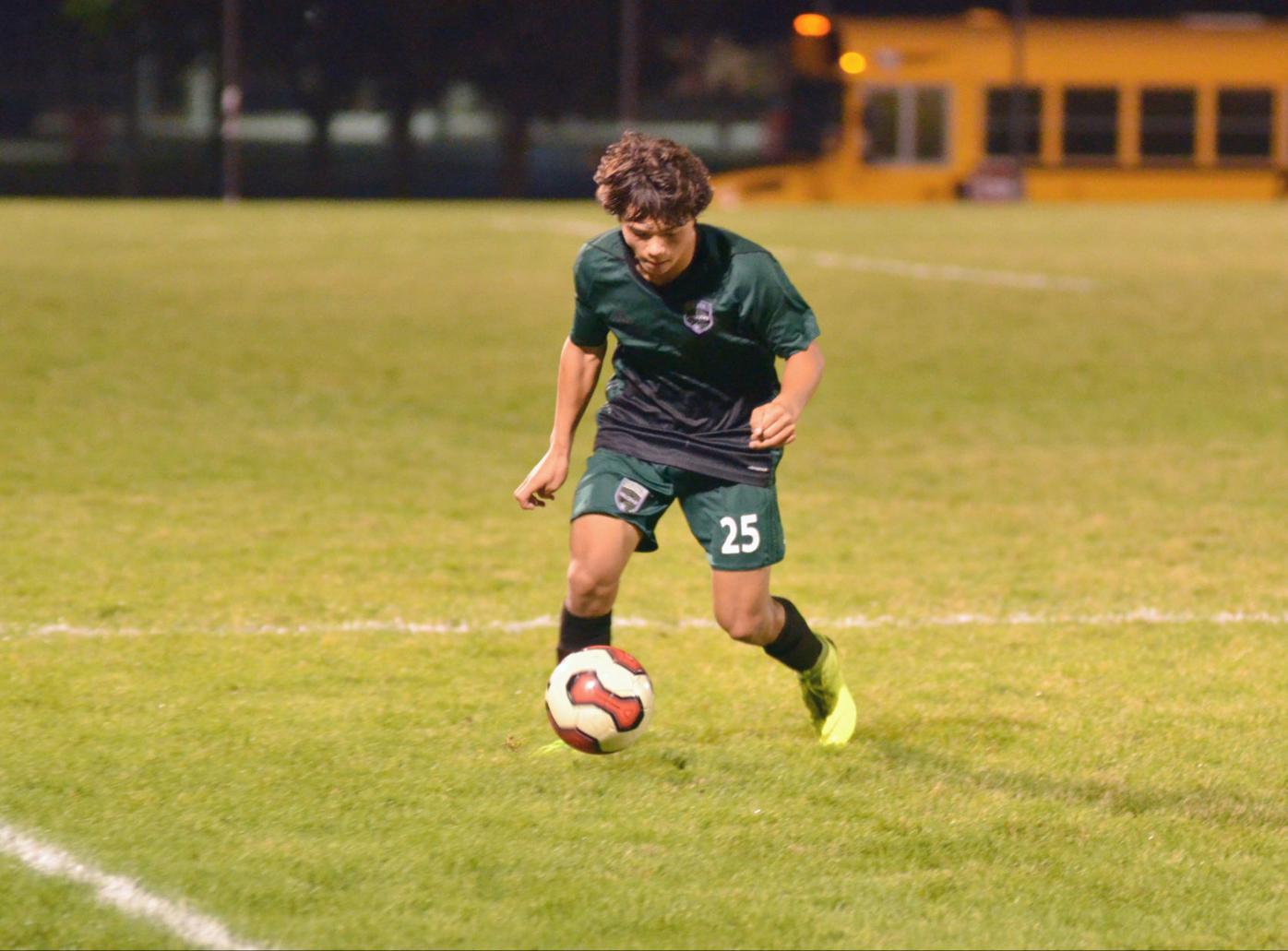 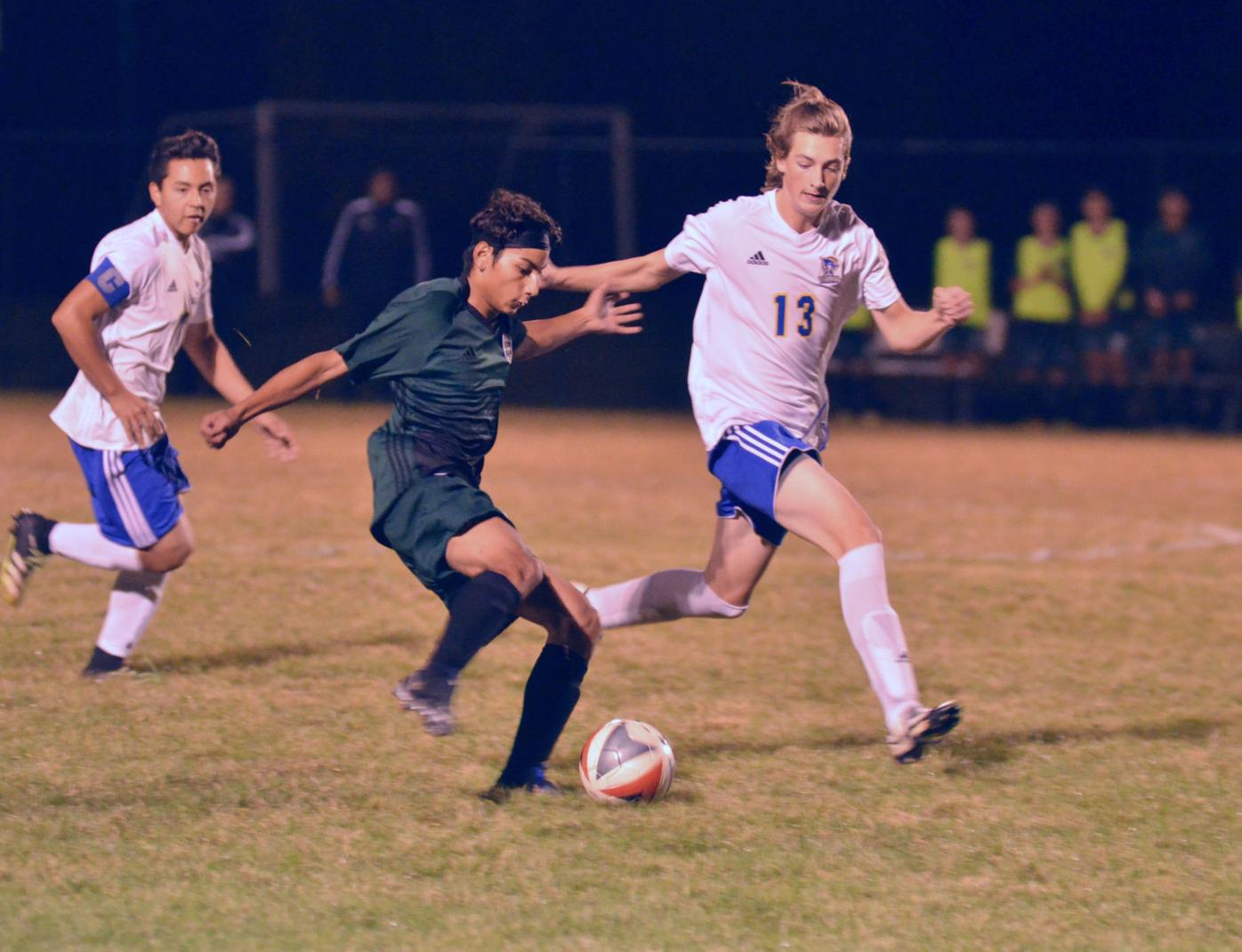 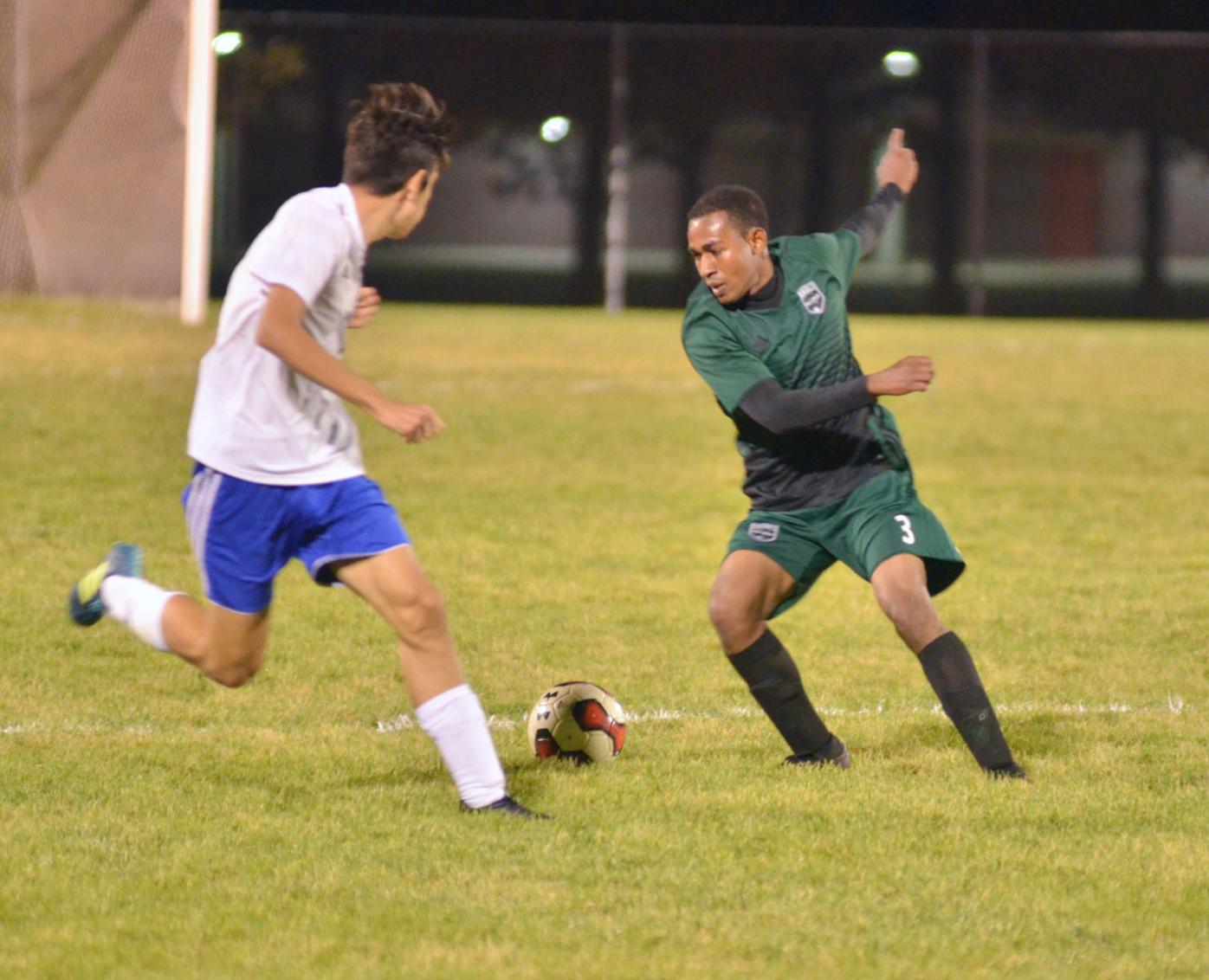 Faribault senior Abdul Said cuts back with the ball during Tuesday’s 2-1 victory against Waseca in the Section 1AA quarterfinals at the Faribault Soccer Complex. (Michael Hughes/southernminn.com)

Faribault senior Henry Schonebaum cuts away from a Waseca defender during Tuesday’s 2-1 victory in the Section 1AA quarterfinals at the Faribault Soccer Complex. (Michael Hughes/southernminn.com)

Faribault senior Abdul Said cuts back with the ball during Tuesday’s 2-1 victory against Waseca in the Section 1AA quarterfinals at the Faribault Soccer Complex. (Michael Hughes/southernminn.com)

After going down a goal in the closing stages of the first half, the Faribault boys soccer team could have panicked Tuesday night at the Faribault Soccer Complex.

When the third-seeded Falcons still trailed even after dominating possession for the first hour of the Section 1AA quarterfinal against No. 6 Waseca, they could have prematurely abandoned their game plan and style of play.

Instead, Faribault continued to pepper direct balls into the penalty box from its midfielders. With 15 minutes remaining in regulation, sophomore Aaron Huerta flicked an incoming cross with his head from the top of the box into junior Luis Martinez, who controlled the ball with his midsection, turned around a defender and fired the equalizing goal past Waseca’s goalkeeper.

A little more than two minutes later, senior Eddie Solis collected a loose ball that was regurgitated out of Waseca’s box and blasted a 25-yard shot into the corner of the net for the go-ahead and eventual game-winning goal.

“We did not get frustrated, because we’ve had that happen in the past and we’ve practiced it,” Solis said. “We’ve been through this many times. I told the guys after that (Waseca) goal, ‘Hey, boys, Faribault, take a deep breath. We’re still playing a sport, have fun and let’s go.’ Then we came back and we scored. We kept the pressure on and we didn’t change anything because we weren’t doing anything bad.”

With the win, Faribault moves on to the Section 1AA semifinals at 5 p.m. Thursday at second-seeded Byron.

To reach that point, the Falcons needed to survive an upset bid from a Waseca squad that played far tougher than its 2-13-1 regular-season record. After snatching that 1-0 halftime advantage, the Bluejays dropped numbers behind the ball to try and best withstand the ensuing wave of pressure the Falcons were set to apply.

“Their keeper, hats off to him,” Faribault coach Brendan Cox said. “He made some phenomenal saves. We were having the chances and it was just a matter of time before we got one in there. Once we got one I figured we’d be OK and we’d get at least one more or possibly a couple more. It was really that patient game and trying to get one through.”

Sophomore defender Lucas Nelson added: “That’s why we won, because we played our game.”

Nelson was a big part of that game, as the Faribault right back not only prevented Waseca counterattacks by winning the ball possession at midfield, but then either quickly redistributing the ball to a midfielder or darting up the sideline with to introduce another attacker for the Bluejays to try and account for.

“He plays out of the back so well and he’s got such an engine on him,” Cox said. “I don’t think he ever stops running. That was huge, just being able to bring those up and adding another attacker they had to be aware of. It opened up some doors, and Reyes (Turcios) on the left side, too, was able to use some of that space as well.”

After all that possession, though, the Falcons still needed their sparingly used goalkeeper to keep them out of overtime. With less than a minute remaining, one of those Waseca counterattack attempts resulted in a breakaway.

That was until sophomore Christian Trujillo quickly charged off his goal line, slid and redirected the ball away from the goal to wrap up the victory.

“That’s huge, but that’s Christian for us,” Cox said. “One of the big things for us is having him back there is he’s such a steady presence and you know you can rely on him and the guys have such trust in him. It’s always a little bit nervous, but he always comes up big in the end and made the save when it mattered.”

Faribault saw just how different postseason soccer can be, as a Waseca team that lost 3-1 earlier this year in Faribault nearly ended the season for the Falcons.

Now, that’s the task in front of Faribault, which travels Thursday to try and avenge a 3-1 regular-season loss against second-seeded Byron in the Section 1AA semifinals. Byron beat Albert Lea 4-0 in its quarterfinal match for its sixth straight win and the 10th win in the last 12 matches.

The Falcons believe they’re more than capable of beating the Bears, who are the one team in the section Faribault lost to this season. That defeat also came in the midst of a tough stretch of five losses in six games.

“We can’t underestimate them, because that’s why we lost,” Nelson said. “We went into the game with our heads too high.”

Solis added: “The regular-season matchup was a bit odd, because it was a rainy day and we really didn’t get to warm up. This game should be a set time on a good day, and it’s going to be a good day to play some soccer.”

“It’s a new game and what happened before doesn’t matter,” Cox said. “It’s a one-game season now. You win or go home, so we’ll just leave it out there and see what happens.”

On the other side of the bracket, fourth-seeded Austin scored a pair of second-half goals to beat fifth-seeded Kasson-Mantorville, and top-seeded Winona beat eighth-seeded Red Wing 5-1.

That sets up a four-team tournament between the top four seeds in Section 1AA.

“It’s anybody’s game right now,” Solis said. “Winona and Austin, that’s going to be a really good game. They both have very fast guys and they both know how to play together, and us versus Byron is going to be the same thing. It’s going to be a tough game. Somebody’s going to state, but not all of us can.”