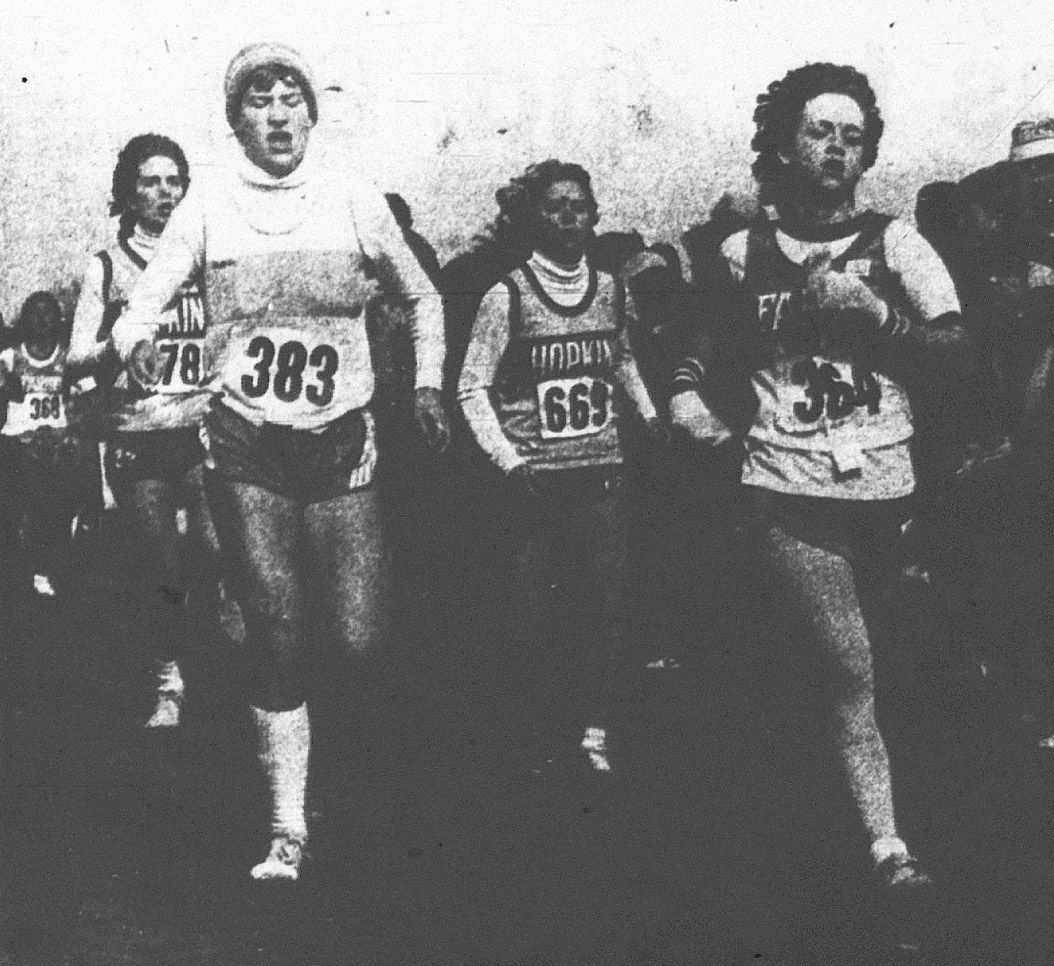 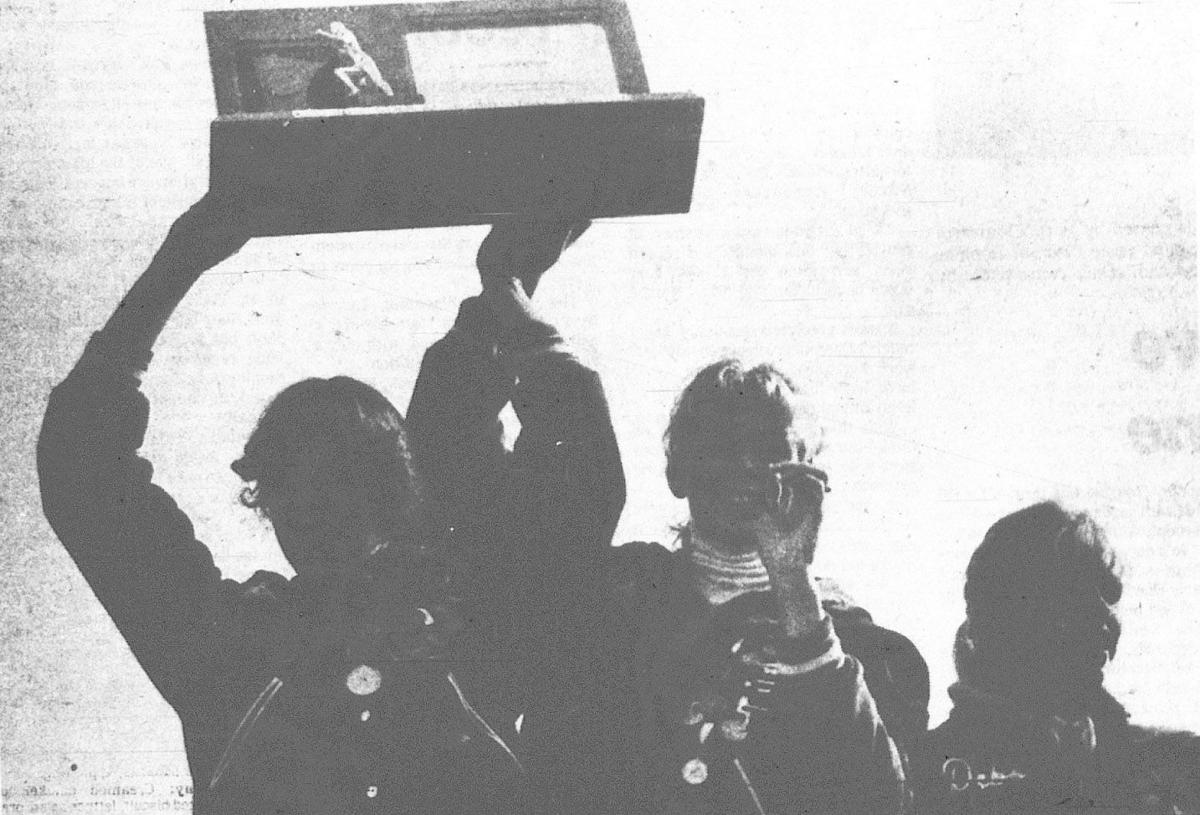 Faribault Falcon seniors Dawn Schreiber (left) and Ellen Welborn (middle) display Falcons’ runner-up trophy from Class AA girls state cross country meet after having it awarded to them Friday at University of Minnesota Golf Course in Falcon Heights. Junior Debbie Tostrude looks on. It is the third straight runner-up trophy for Faribault in as many years. (Daily News file photo)

Faribault Falcon seniors Dawn Schreiber (left) and Ellen Welborn (middle) display Falcons’ runner-up trophy from Class AA girls state cross country meet after having it awarded to them Friday at University of Minnesota Golf Course in Falcon Heights. Junior Debbie Tostrude looks on. It is the third straight runner-up trophy for Faribault in as many years. (Daily News file photo)

This story originally appeared in the Saturday, Nov. 5, 1983 edition of the Daily News

The loud chanting of the fans lifted the spirits and hopes of the Falcon runners and cheered them on. Then, Faribault girls and boys runners gave them a show. The athletes amazed their followers and coach, Lonnie Nelson, when they finished second and fifth, respectively, at the state Class AA cross country meets Friday at the University of Minnesota Golf Course.

Although it was a happy time for the girls, it also marks the third straight year they fell in the bridesmaid role — this time taking second to Hopkins-Lindbergh. The past two years, Minnetonka finished first. Ten points separated the top three teams Friday.

On the other hand, the boys capped a brilliant season by sneaking up on everyone — finishing two points in front of sixth-place Esko-Cloquet. After surprisingly winning Region One AA a week ago Thursday over Winona, unranked Faribault continued to peak at state with senior Kirk Miller leading the Falcons’ pack, placing 18th overall.

“I don’t care if we did finish second again,” said a happy Julie Ellerbusch. “It would be nice to get No. 1 pretty soon, but I’ll take second if we can’t get it (No. 1).”

Dan Casper of Northfield finished seventh in the 5,000-meter state race in 16:00. Casper took first in region with a 16:11 timing.

“I was real excited for the boys,” Nelson said. “But I didn’t have much time to talk to them after the race. You could tell some were off a little but despite that they did really well.”

Junior John Wodney of Esko captured the Class AA boys race with a record-breaking 15:23.3 — 10 seconds ahead of 1980 time set by Pete Wareham of Minneapolis Southwest. He was also 20 seconds ahead of the second-place finisher.

Stephanie Herbst of Chaska captured her first girls Class AA title with ease. She finished 50 yards ahead of the next competitor with a 11:08.1.

The secret to the Faribault girls’ finish was the four-girl pack that finished 11th, 16th, 23rd and 27th. Dawn Schreiber, Debbie Tostrude, Lisa Calcutt and Ellerbusch stayed together as much as possible during the race. Kim Morrow brought in a 46th place to help out the team.

“All I told the girls was to get a good start,” Nelson said. “I didn’t even see if they did — I was over the hill.”

Falcons’ Ranae Mechura, who began running cross country for the first time this fall, topped Faribault runners with an eighth-place finish. In running an 11:50 race, she ran 14 seconds slower than her personal best — but the sophomore was pleased with her 3,200-meter results in her first state meet.

“I got tired around those hills and I kept telling myself, ‘Take small steps and keep going,’” she said. “I saw the finish line and went after anyone I could.”

Falcon girls were not expected to do as well as they did Friday after taking runner-up honors at the region meet last week to Winona. But the girls said they thrived on the role as darkhorse — in contrast to the favorite role they have had for the past two years.

“The other two years, we just had so much pressure on us,” Ellerbusch said. “This year no one thought we’d have a chance.”

“I figured, if we had five runners under 12 minutes, we’d win it,” Nelson said. “The thing last year that bothered us a little was the weather. We (the team) didn’t wear tights like we did this year — that kept the legs warm. But, even if we did wear them last year, we couldn’t have beat Minnetonka — they were such a powerhouse team.”

Herbst set a vicious pace for the rest of the runners, finishing the half-mile in 2:38. Last spring’s state’s 3,200 champion kept up the pace, finishing with a 5:07 for the mile. She finished second last year in the cross country race.

To help spur the boys on was the girls tradition of making the state meet. It was the fifth time the girls made it and the first for the boys.

“That was a little bit of it,” said Miller. “It’s good to run with the girls and they are good. That gave us a desire to go to state like them.”

Miller, a senior, described the state course as hilly and hard, but the 50-degree weather welcoming. “It’ll (the course) break you down — it’s tough,” he said. “I thought the weather was perfect. I just wanted to stay behind the front pack. We wanted to bring in as many points as we could.”

Wodney’s record-setting pace set a 2:13 half-mile time and was 4:36 at the mile marker. At two miles, the pace was still fast at 9:58. “It was a fast pace, but you have to expect that at state,” Miller said.

Miller’s pace was 20 seconds off his personal best this year; Scott Swanson’s was off 17 seconds.

“I felt a little tired — I don’t run well in the cold,” Swanson said. Miller took second at region behind Casper.

Both boys insisted they were not surprised at their fifth-place finish Friday and region title. “We knew we could do it if we gave it all we got,” Miller said. “I don’t think we were a surprise at regions,” Swanson added. “We knew we could Winona.”

Both girls and boys team lose runners to graduation. Schreiber, Welborn, Miller and Scott Swanson will be lost.