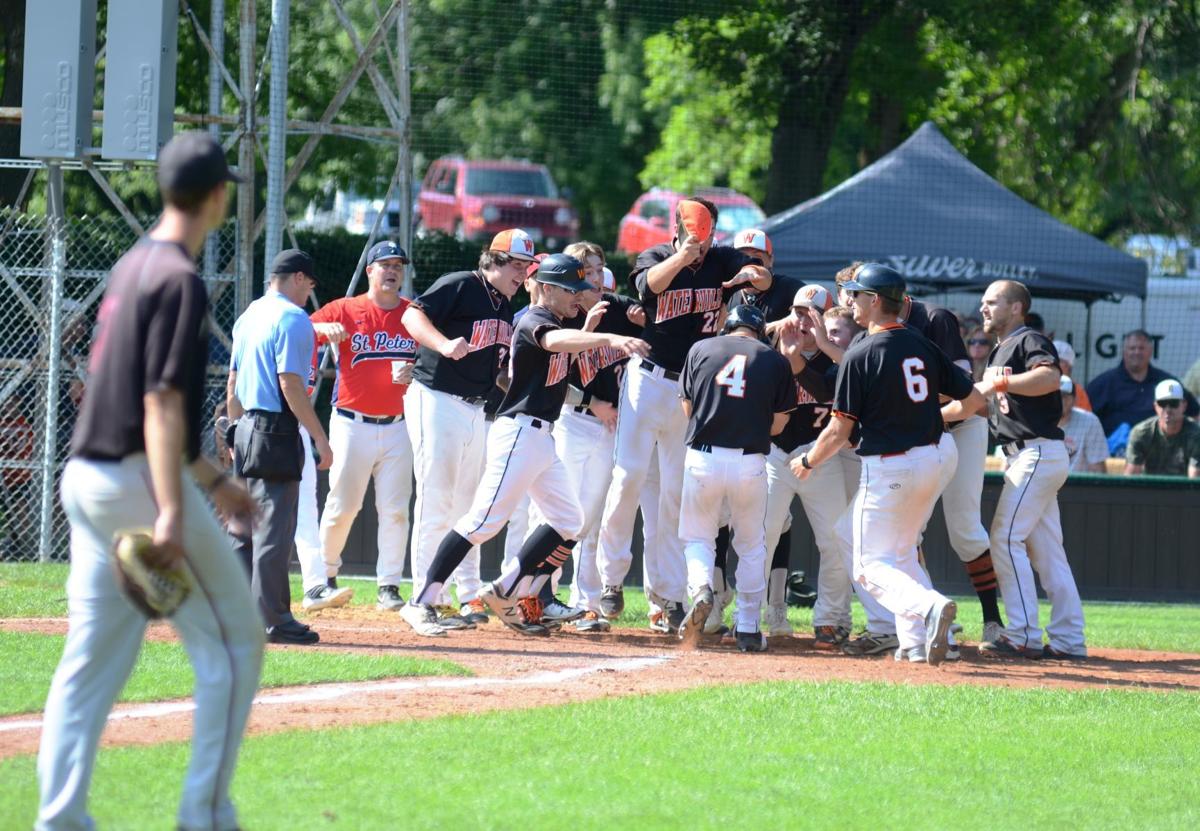 The Waterville Indians swarmed No. 4 Riley Schultz after his two-run home run in the bottom of the ninth inning lifted them to a state tournament victory against the St. Benedict Saints. (Daily News file photo) 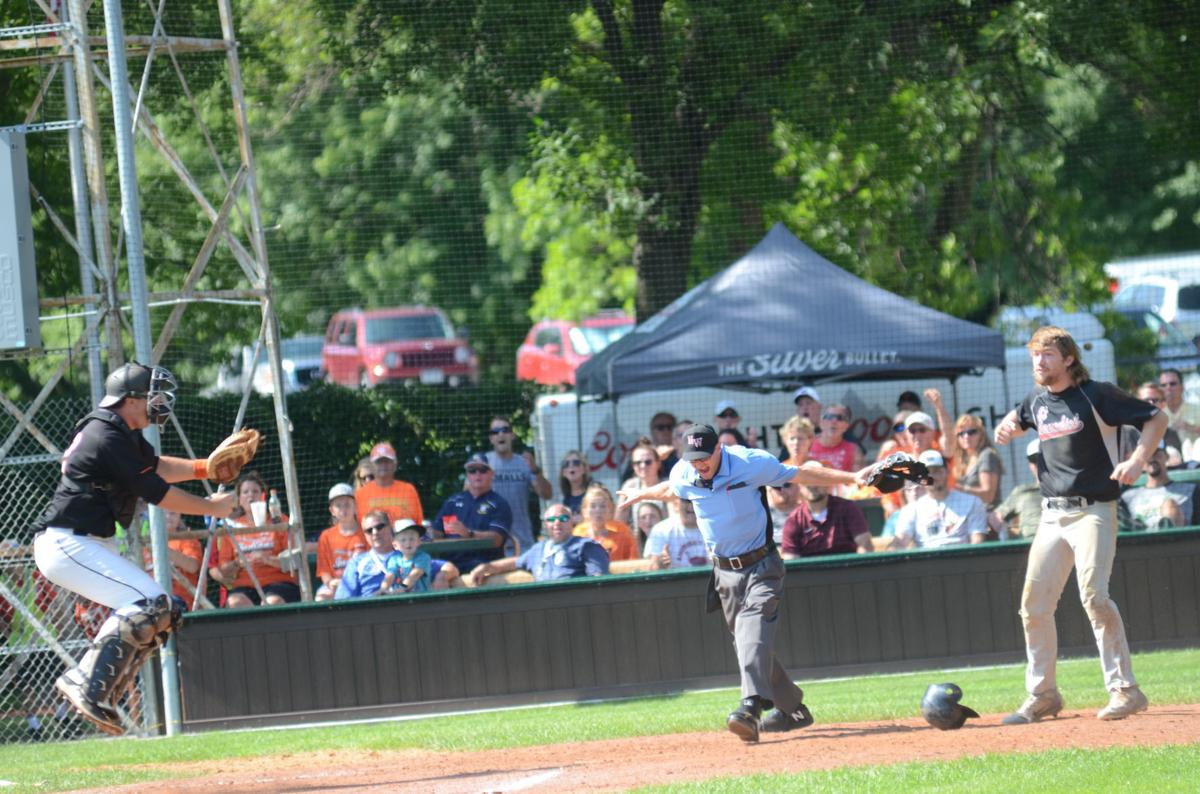 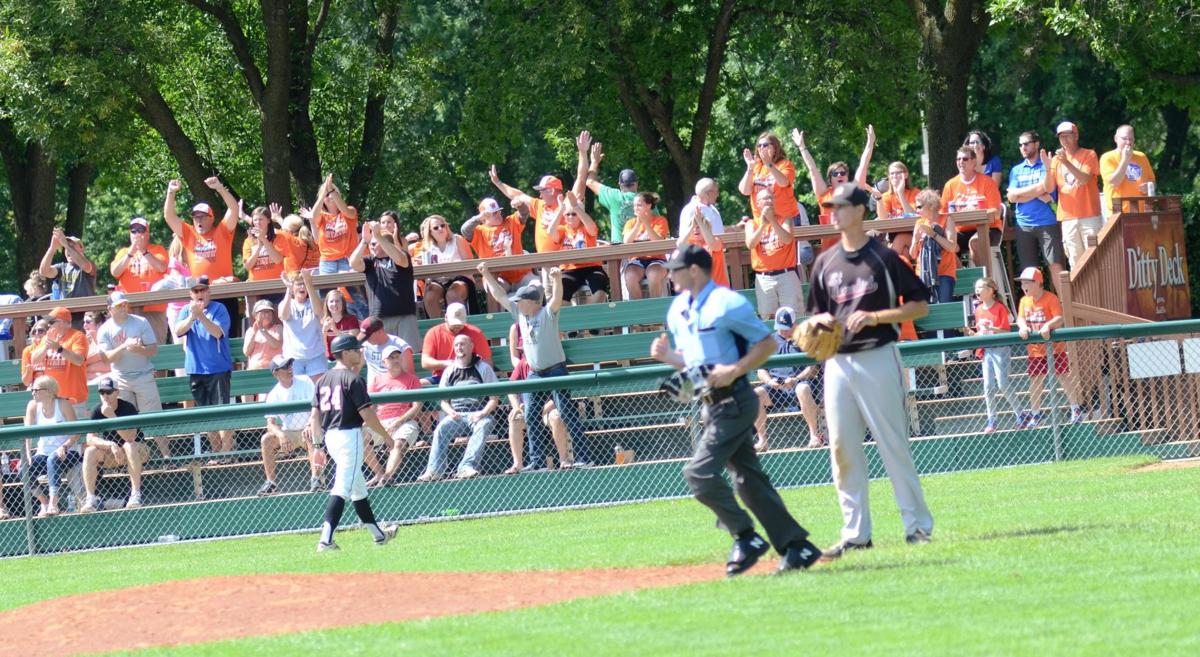 The Waterville Indians swarmed No. 4 Riley Schultz after his two-run home run in the bottom of the ninth inning lifted them to a state tournament victory against the St. Benedict Saints. (Daily News file photo)

DELANO — A lot of angst and even more celebration.

A two-run walk-off home run by Riley Schultz lifted the Waterville Indians (31-2) to a 3-2 victory over the St. Benedict Saints (16-16) in round one of the Class C State Amateur Baseball Tournament.

The game moved at a slow pace with some close calls and a tight strike zone riling up the packed Waterville side of the bleachers.

Dalton Grose started on the mound for Waterville and faced off against Tanner Oakes in a battle of aces.

Grose did not allow a hit, but his outing was short lived as he struggled to find the strike zone. He departed with the bases loaded and nobody out in the third.

Luke Sellner limited the damage in relief. A double play in the inning helped hold the Saints to one run.

Waterville put runners on first and second base in its half of the third thanks to an error and a bloop single by Grose, but couldn’t break through.

Nolan Grose got the Indians on the board in the fourth with a towering solo home run to right field.

The score held at 1-1 as St. Benedict went hitless until a single with one out in the sixth.

Oakes left after five innings and was replaced by Trey Kocher. Oakes entered with a .53 season ERA and Kocher 3.41.

Kocher and Sellner were tough to solve until St. Ben’s took the lead in the eighth.

With one out and the bases loaded, a ground ball to Waterville shortstop Ben Boran was fielded cleanly and thrown home for the force out. The throw beat the runner, but a contorting slide allowed the runner to evade the tag.

The Indians’ side vehemently argued the call, but to no avail.

Sellner bounced back to get out of the inning. Waterville didn’t have an answer in the eighth.

Bladyn Bartelt came in for the relief for the Indians and pitched a scoreless ninth.

He was credited with the win thanks to Luke Sellner, who began the ninth with a single, followed by Schultz’ heroics on a no-doubt homer.

It was Schultz’ second long ball of the season. The Faribault High School graduate was able to key in on fastball against Kocher, who took the loss.

“Just get guys on base and score a run. Keep them from finishing it out,” Schultz said of the plan as momentum shifted St. Ben’s way late.

The Indians lost a one-run game at state in this scenario last year. Now, they advance to play the Bluffton Braves 4:30 p.m. Saturday in Maple Lake in the round of 32.

How does it feel to Schultz to survive and advance this time around?

Around the DRS League

Dakota-Rice-Scott League teams posted a 1-2 record in the first weekend of the state tournament.

No. 1 New Market earned a bye and will play Luverne, which beat Carver 4-3. The Muskies are ranked No. 1 in the state and are the favorites in the bracket. They drafted Faribault players Matt Lane and Mike Carpentier.

Faribault's Joey Grote's run comes to a close as a draftee with St. Benedict.