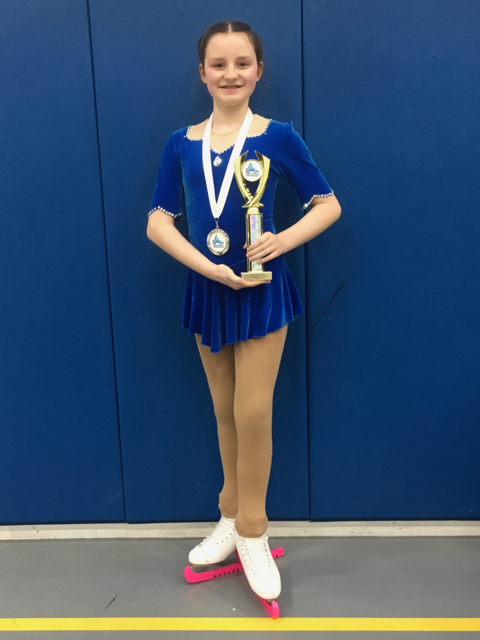 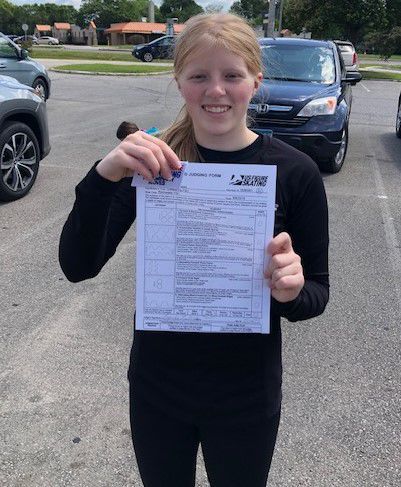 Kacie Hofius was all smiles after passing a figure skating test in August. (Submitted photo) 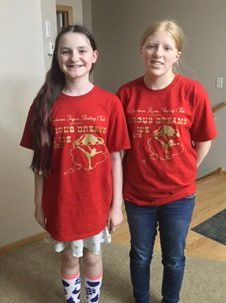 Kacie Hofius was all smiles after passing a figure skating test in August. (Submitted photo)

To and fro go friends in figure skating Teegan Embury and Kacie Hofius.

While separated by five years in age, the two Faribaultians are united in going wherever it takes to find coveted ice time.

In the near year-round sport, Embury and Hofius each spend six to eight hours per week skating. That includes taking lessons at Shattuck-St. Mary’s, Northfield Skating School and Owatonna Figure Skating Club, the latter of which they’re members.

Embury, 11, and Hofius, 16, represent how there is no one way to approach the sport. Embury enjoys the spotlight of competing and performing in shows while also passing through United States Figure Skating Association program levels. Hofius prefers the self-satisfaction that comes with honing her craft individually and working toward progressing through USFSA testing levels.

The two don’t have an end goal for their skating development, but have shown no signs of letting up soon.

“I asked several times if (Hofius) wanted to stop and she said ‘Nope,’” said Hofius’ grandmother and Owatonna Figure Skating Club board member, Barbara Condit. “This is her time to be her on the ice.”

In figure skating, skaters can both compete as well as progress through levels via testing, similar to earning belts in karate. Competitions are organized by these skill levels.

It is not uncommon for skaters to fail one of these rigorous tests on their first try. Six months of training is common before attempting each test.

One of the sport’s common misconceptions is “that figure skating isn’t hard,” Teegan Embury said. “A lot of kids, especially a lot of boys in my class, they think figure skating is super easy. It’s not.”

The good ones just make it look that way.

On her second attempt, Hofius felt the sweet relief in August of passing the second level, Preliminary, in Moves in the Field. She did it with a 100% score.

“When she did this, she came off the ice really nervous because she already failed it once. But her friends were there to encourage her,” Condit said. “She was nervous, but one said ‘Ah, you aced it.’ Courtney (her coach) says, ‘Well, we’ll see. It depends on the judge.’ Courtney kept one sheet out of the envelope and we left this in the envelope because we weren’t going to tell her she aced it.”

Hofius played it off like the cool customer she is.

Every last detail is scrutinized.

“You have to have the sharpness in your turns,” Condit said. “You can’t just glide through. You have to put your foot down and skate. When you go into that turn, you better be ready to do that sharp edge. Because that’s what they grade you on, is how sharp your edge was.”

A judge could glean a lot from a skater’s performance with just their ears.

“You can hear the crispness of the ice from her blades when she made her turns,” Condit said. “That’s what they’re looking for.”

Embury passed her Free Skate 3 testing and is working toward Free Skate 4.

For competition, Embury works with her coach to choreograph moves set to music. The coaching can be demanding at times, but it stems from knowing exactly what judges will be evaluating

Embury competed at a competition in August at Augsburg University. At the Excel Beginner level, She placed fourth in both the freestyle and compulsory categories. In February in Rochester, she was first in freestyle and fourth in compulsory.

She loves the medals and trophies that fill up her home, but also enjoys the camaraderie of skating with peers.

“It’s not just the skating that’s fun,” Embury said, “it’s the people. Getting to skate with them, talk with them.”

Figure skating is not a Minnesota State High School League sanctioned sport. While ice sports rule the winter in Minnesota, figure skaters get left out in the cold as far as funding goes.

“We get no money from community ed, we get no money from the school, we get no money from the VFW. What we pay is what the normal ice hockey players would pay with no benefit except the ice time,” Hofius’ grandmother and OFSC board member Barbara Condit said. “So how they get their money to help lower the cost of ice time simply is through doing benefits, selling wreaths and this type of stuff. Other than that, there’s no funding so you have to have the drive and determination to go forward in this field if that’s what you want.”

And the sport can be expensive. Skaters buy their boots and blades separately. Each runs for hundreds of dollars and are swapped out when feet grow larger or a new blade when a skater advances in level.

Embury and Hofius are even helping others learn the sport.

Junior coaches play an integral rule at Owatonna Figure Skating Club both in teaching and inspiring.

“We get you out there with junior coaches and let you really feel the ice,” Condit said. “The thing is, some of them stay and watch their coaches skate around and think ‘Wait a minute. I can do this. This is what I’m going to be doing if I stay in this.’”