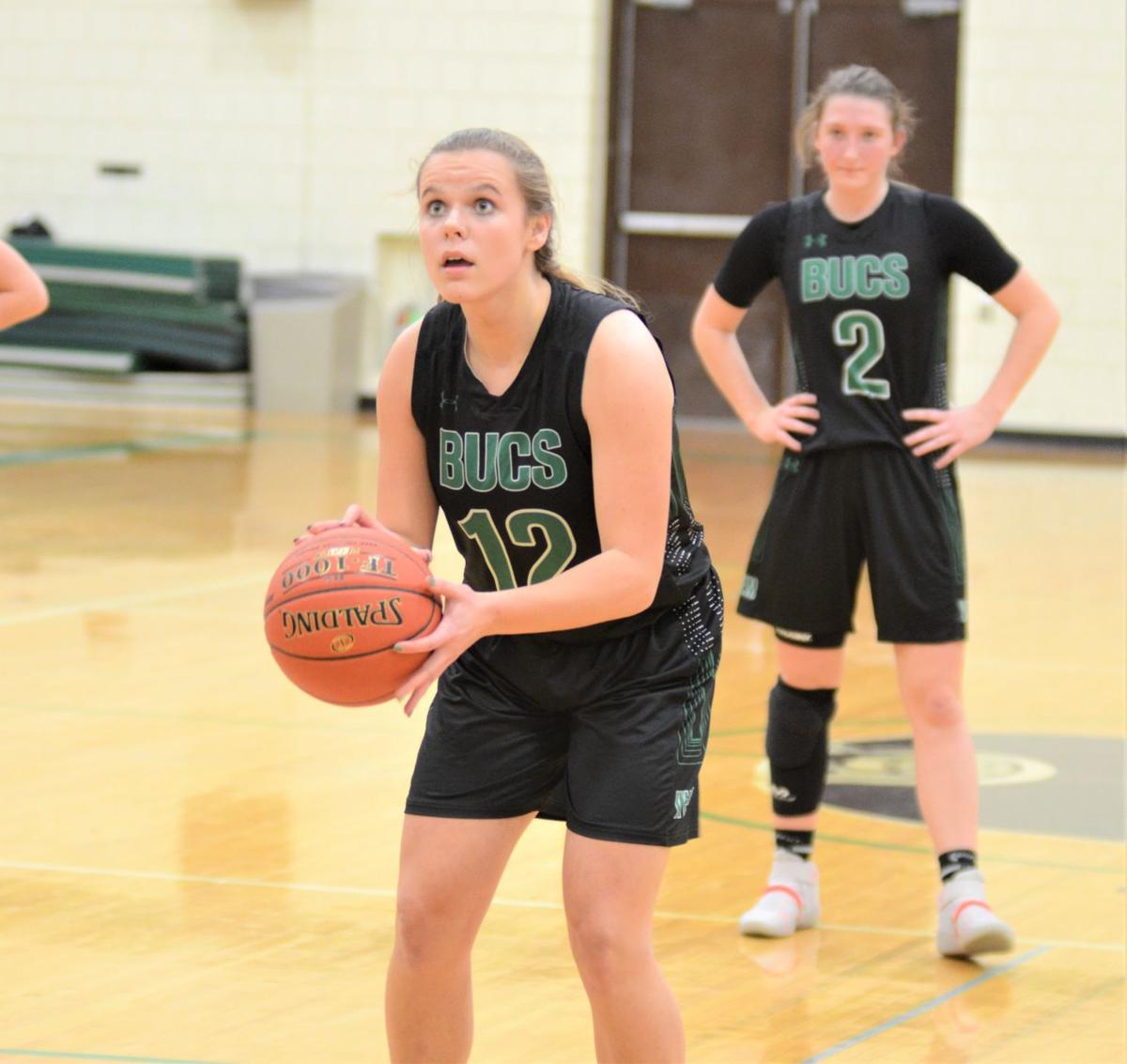 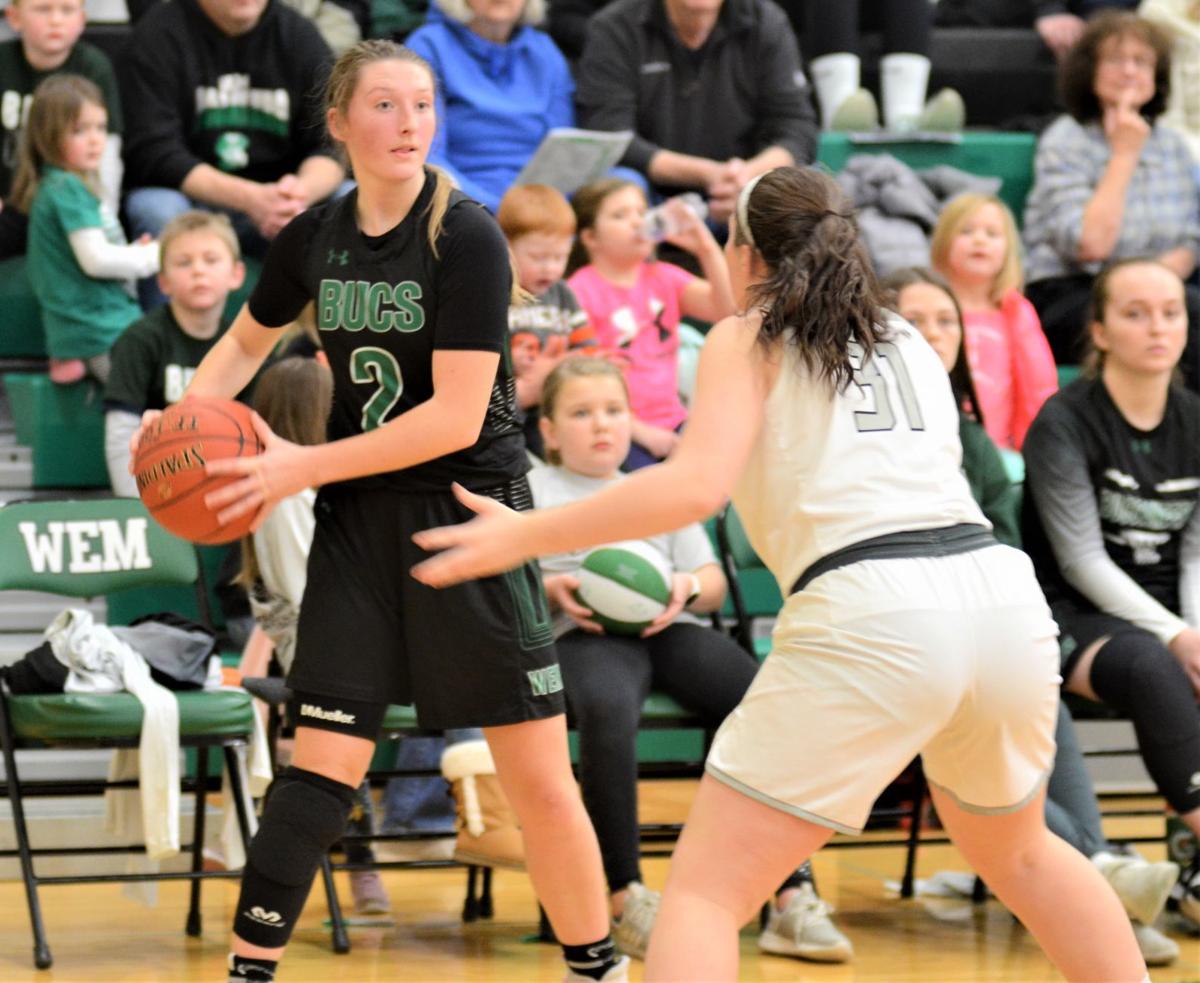 Brielle Bartelt looks past a Blooming Prairie defender in search of an open teammate. Bartelt scored 18 points for the ninth-ranked Bucs, who defeated fifth-ranked Blooming Prairie 59-51 and improved to 14-0 this season. (Jason Hommes/Faribault Daily News) 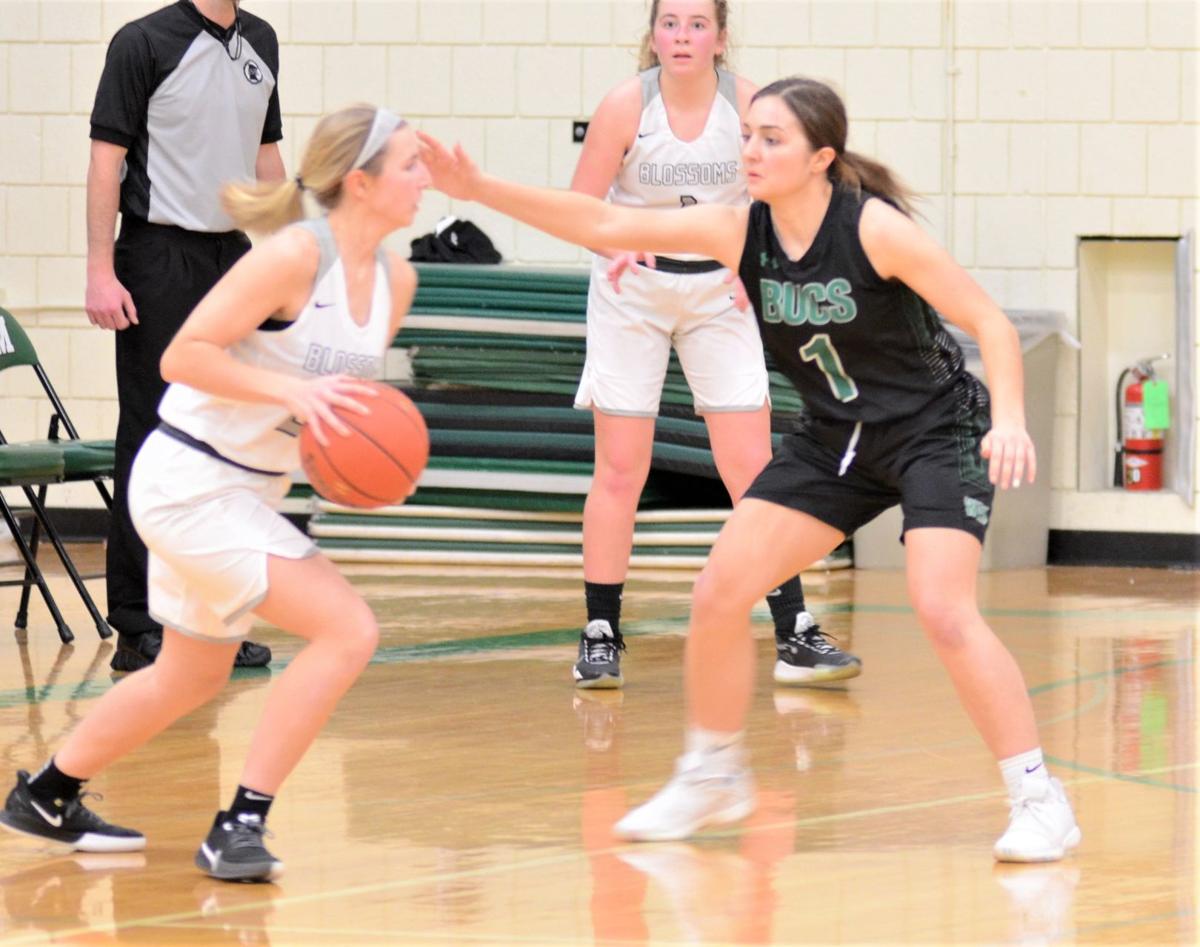 WEM’s Allison Reints came off the bench and grabbed five rebounds in 17 minutes by playing solid defense, and the Bucs gradually pulled away from the Blossoms in the second half to win 59-51. (Jason Hommes/Faribault Daily News)

Brielle Bartelt looks past a Blooming Prairie defender in search of an open teammate. Bartelt scored 18 points for the ninth-ranked Bucs, who defeated fifth-ranked Blooming Prairie 59-51 and improved to 14-0 this season. (Jason Hommes/Faribault Daily News)

WEM’s Allison Reints came off the bench and grabbed five rebounds in 17 minutes by playing solid defense, and the Bucs gradually pulled away from the Blossoms in the second half to win 59-51. (Jason Hommes/Faribault Daily News)

Friday night’s girls basketball game in Waterville was a matchup between two heavyweights: The Waterville-Elysian-Morristown Buccaneers (ranked No. 9 in Class A) and the Blooming Prairie Awesome Blossoms (No. 5 in Class A).

The Bucs were at their best on defense in the final few minutes of the first half and withstood a Blossoms’ rally early in the second half to hang on for a 59-51 win, boosting their record to 14-0 and continuing their impressive season.

The Blossoms had an early lead thanks to a pair of 3-pointers at the start of the game, but WEM’s defense rose up and allowed the Bucs to take the lead midway through the first half. From then until halftime, the Bucs gave up just four points.

“I thought we had a couple breakdowns early in the game, but for the most part I thought we were pretty solid on defense,” WEM coach Ty Kaus said. “Early on we lost sight of their shooters a couple times and they made some shots, and we didn’t adjust to some of their plays, but I thought the girls worked really hard on the offensive end, and I thought we moved the ball really well.”

The Bucs’ offense took just a little bit to get going, but Kaus felt the team was doing a good job focusing on getting good looks, and he knew it was only a matter of time before they started draining more shots.

Toryn Richards, a junior, also believed her team could compete against Blooming Prairie, both offensively and defensively.

“We’ve worked so hard to come this far and we’ve been building up our confidence, and we know that any team that comes our way, no matter who they are, we can be competitive against them,” Richards said. “This game was probably one of our best games because we really came together as a team, and it just feels amazing to win such a big game.”

Richards finished with 15 points for the Bucs and also led the team with nine rebounds. Brielle Bartelt also had another strong game with 18 points, while Ellie Ready scored nine points, finished with four assists and grabbed six rebounds.

“It was pretty much a total team effort,” Kaus said. “We focused our game plan on their three best players. We simply wanted to try to take away what they do best and make them do something else or go to their second move, and we felt that if we could do that then we’d be successful.”

Kaus was referring to Megan Oswald, Maggie Bruns and Julia Worke. Worke managed 19 points against the Bucs and Oswald scored 17, but otherwise the WEM defense did a pretty good job of limiting the Blossoms.

“Oswald is a very good post player, as I think she average a double-double last year and she’s doing the same this year,” Kaus said. “She’s tough inside and has some very good moves and she passes the ball very well, which makes her very tough to guard. Bruns is another one who can score a lot and handles the ball well, and Worke is an excellent 3-point shooter, so we talked about not giving her any cushion there, but sure enough she hit two 3-pointers at the start of the game.”

The Bucs regrouped and refocused, and by halftime they were ahead 26-21. The Blossoms closed to within two points just three minutes into the second half, but WEM never let them get any closer.

“Sometimes we get in our heads a bit, but we always find ways to help each other out,” Richards said. “We’ve just been playing really confident as a team and we stayed really confident throughout the second half.”

With 15 minutes left in the game, the Bucs went on a 14-4 scoring run, which gave them enough space to hold off the Blossoms in the end.

“We’ve talked about it all year, that no matter how the first half goes, the first five minutes of the second half have got to be ours,” Kaus said. “We’ve been pretty consistent all year in stretching our leads by preaching one possession at a time and always having that next play mentality.”

The Bucs (14-0 overall, 6-0 Gopher Conference) showed that mentality in the second half, with Bartelt and Richards leading the way. The team moved the ball well and stretched its lead, but never became overconfident, as they knew the Blossoms (10-2, 4-1 Gopher) were more than capable of coming from behind.

“We just stayed diligent on defense, and we know that if we defend like we’re capable of, we feel like we’ve got a shot against anybody,” Kaus said. “I’m just really, really proud of the girls’ effort. We knew this was a big one coming in and we told them to leave it all on the floor. We felt pretty confident that if we came out with a strong effort, we’d have a good chance to win, and I thought our effort was fantastic. It was a nice win and I’m very proud of the team.”

Sports reporter Jason Hommes can be reached at 507-333-3119. Follow him on Twitter @FDNjason. ©Copyright 2019 APG Media of Southern Minnesota. All rights reserved.