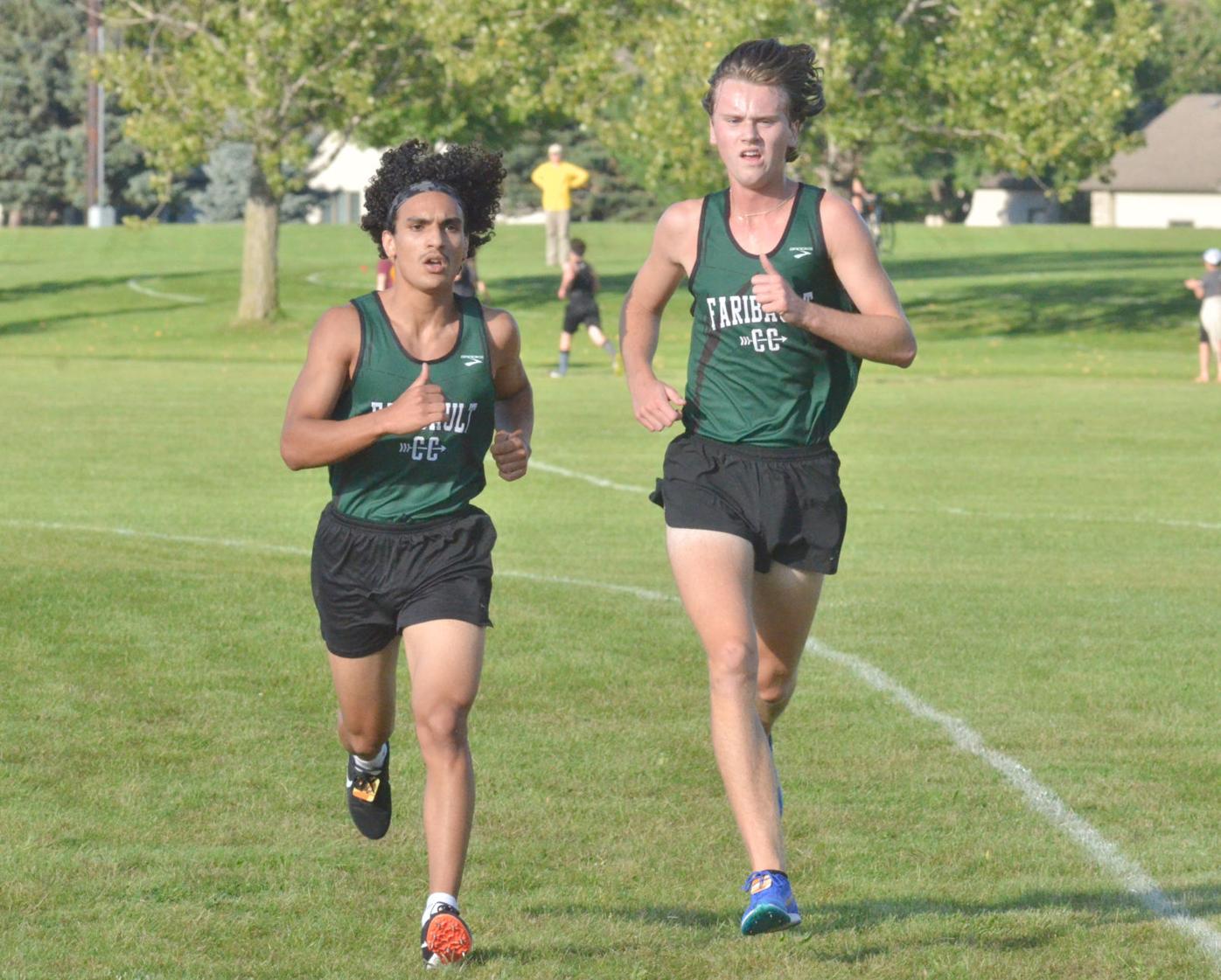 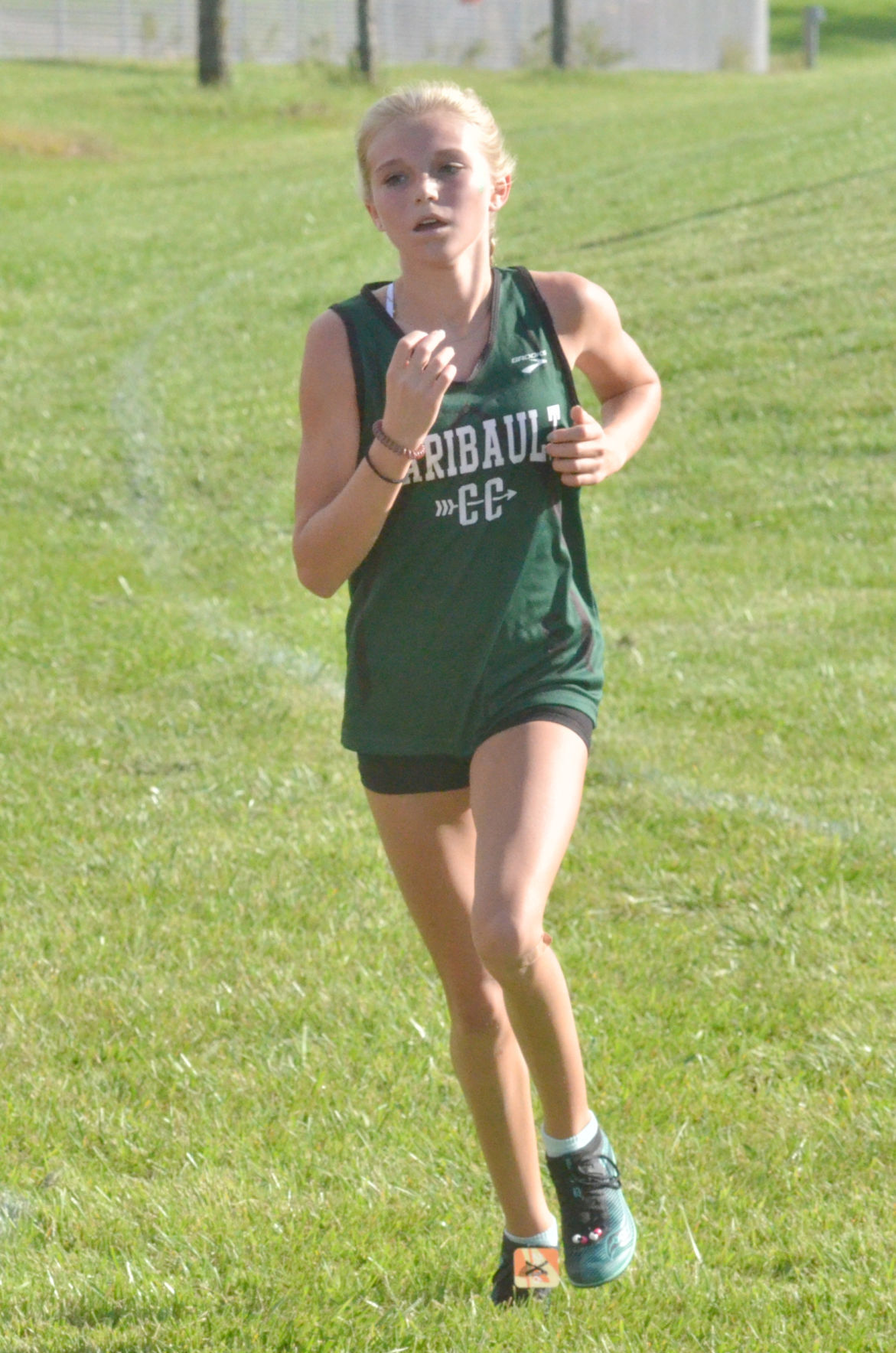 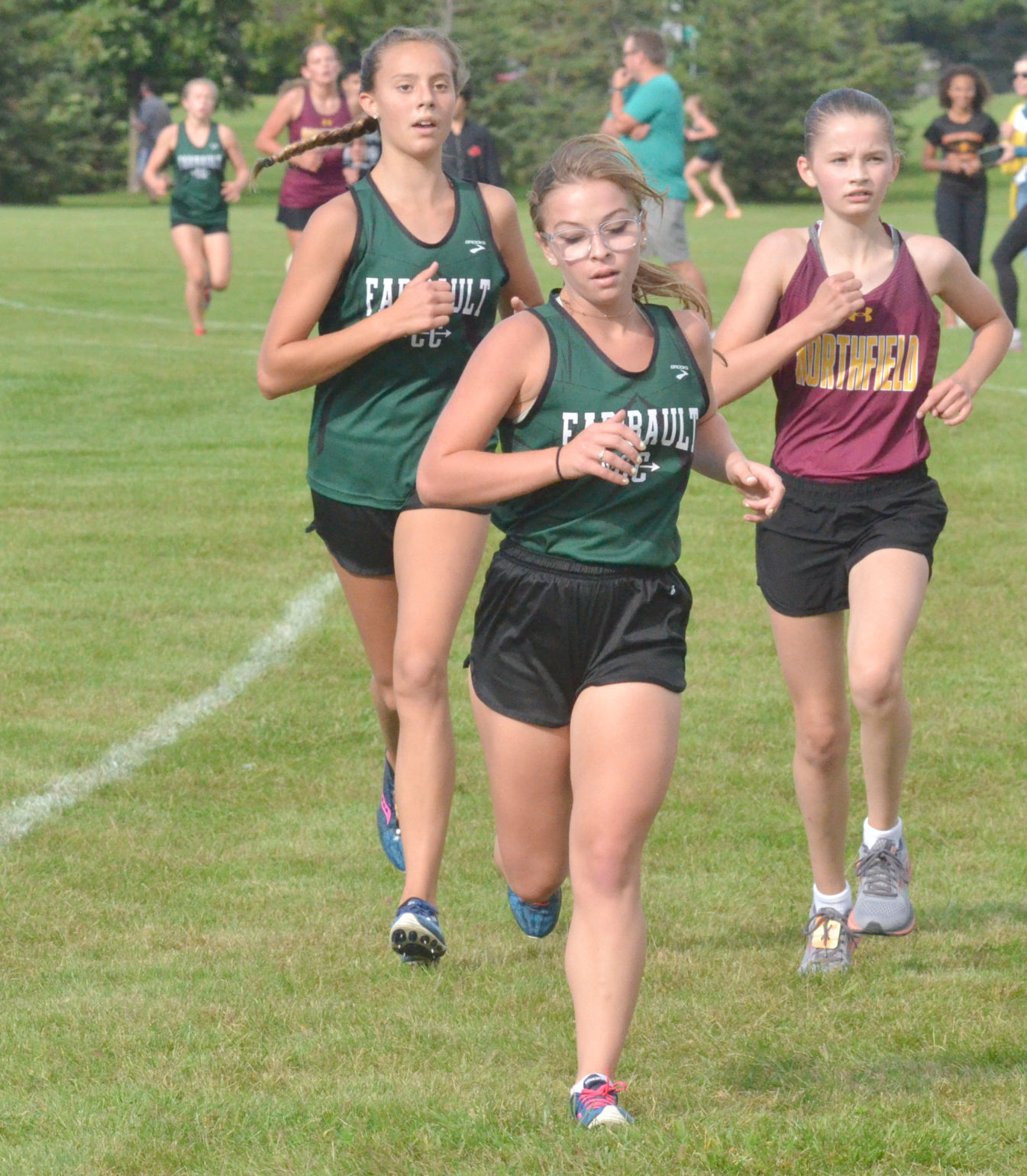 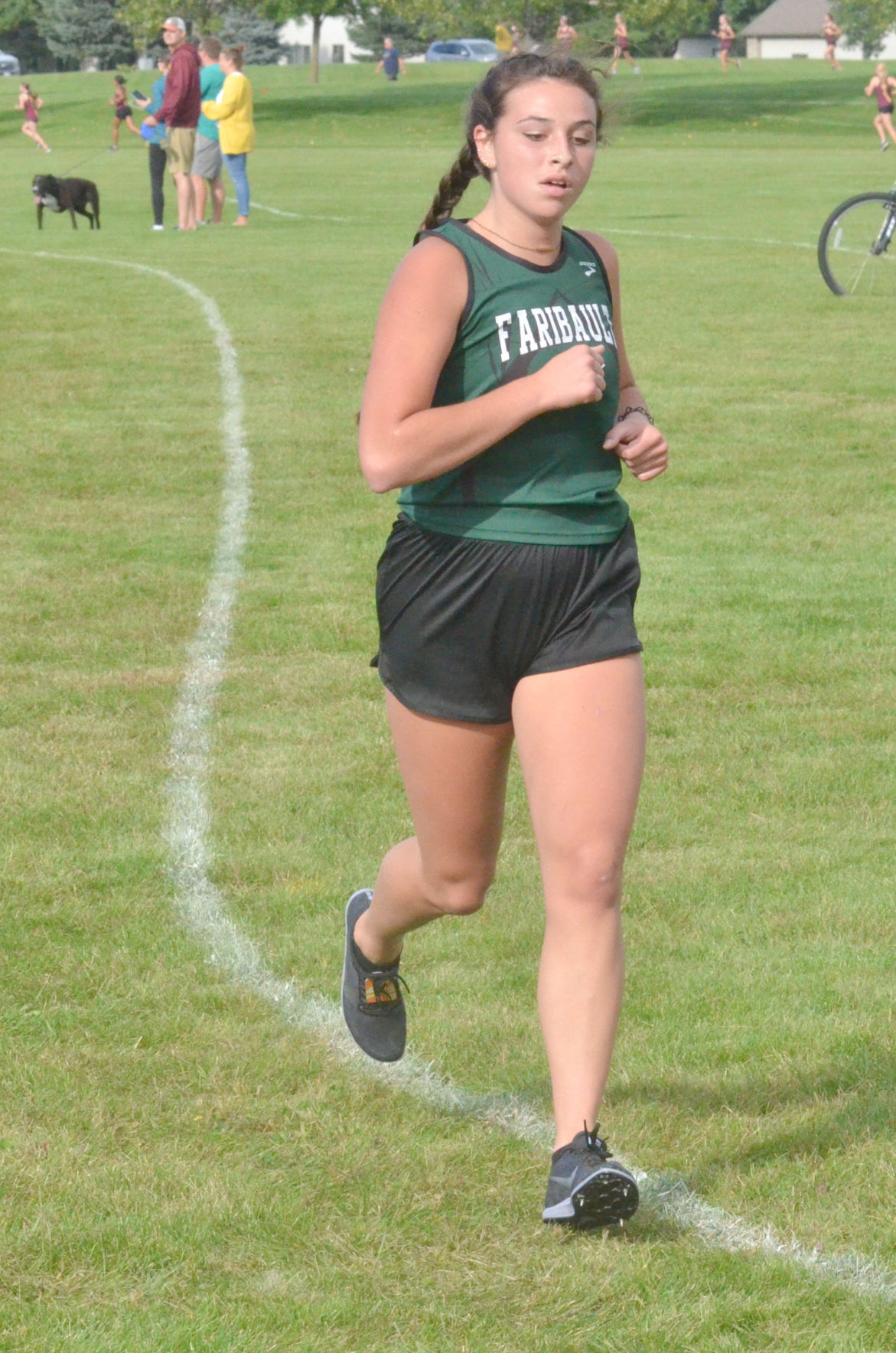 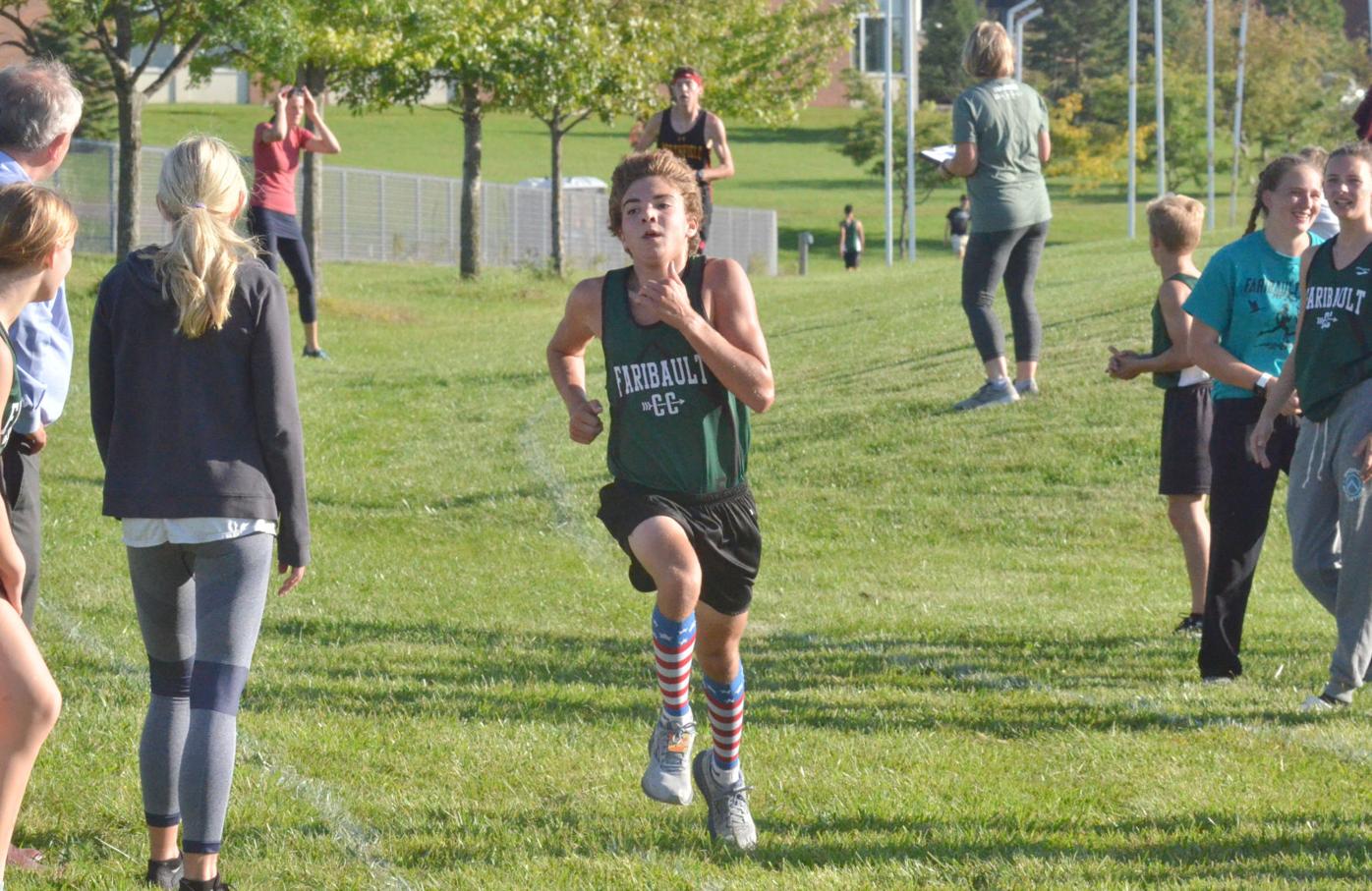 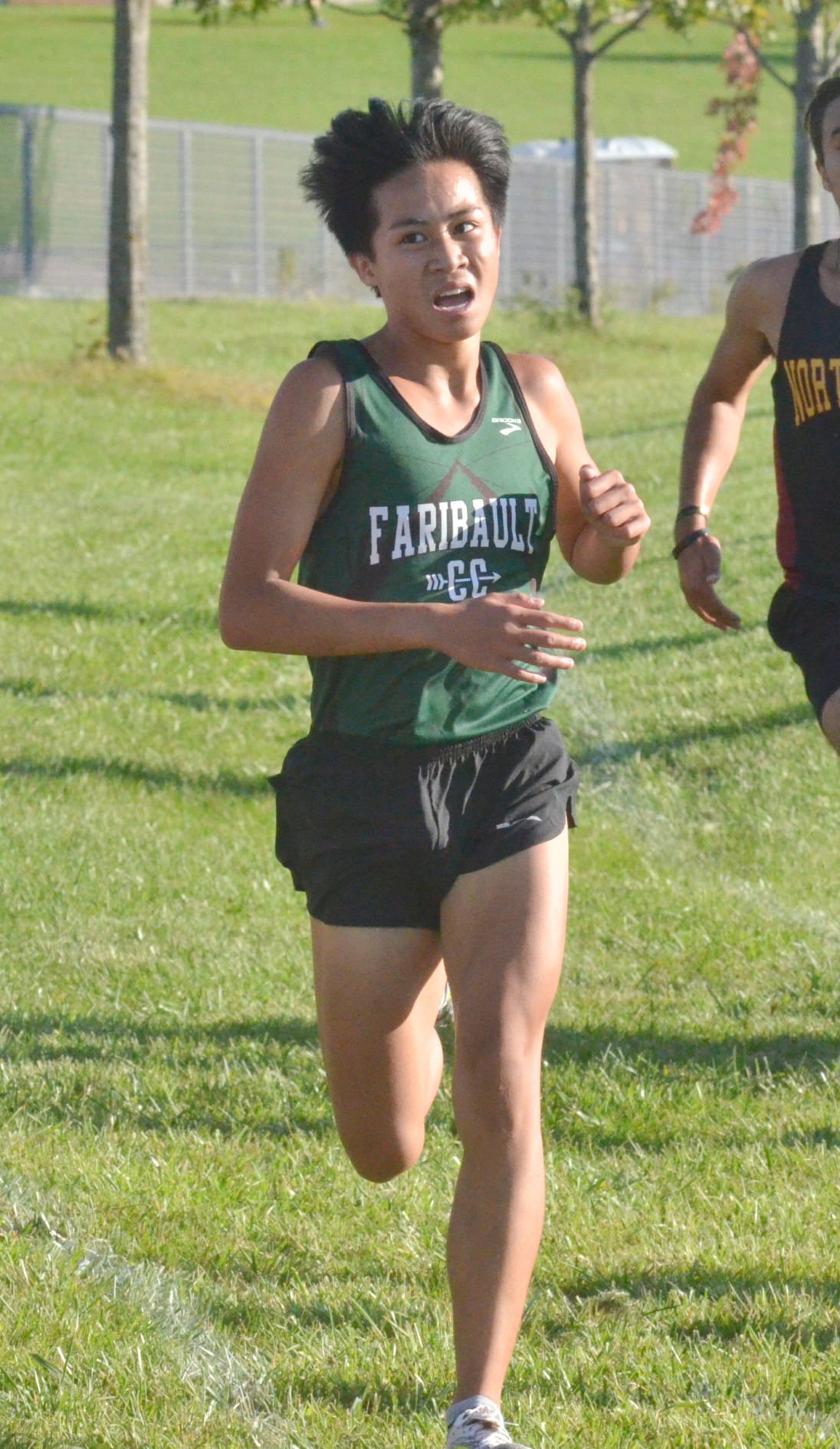 The pair of frontrunners for the Faribault boys cross country team are both in lockstep when it comes to the desire for the Falcons to qualify for the Class AA state meet this year.

Where Boadib and Tuma diverge, however, are on the individual goals for the two runners that have been attached at the hip so far this season.

That declaration was met with a side-eye glance for Tuma, who cut in to correct that goal to a personal-best 5-kilometer time of under 17 minutes. Bouadib doubled down on his initial statement, however.

At Tuesday’s dual race at Northfield, the pair of runners both dipped underneath 18 minutes, with Bouadib’s late kick powering him to second place overall with a time of 17 minutes, 48.8 seconds and Tuma not far behind in third place at 17:55.

“All the boys have been making a lot of improvements and I think we all pretty much hit PRs this race actually,” Tuma said. “We’ve been doing really well.”

That’s after the Faribault Invitational on Friday, Sept. 10, when the Falcons claimed eighth place out of 15 teams, which included Stillwater and Owatonna — both of which are ranked in Class AAA.

More important than the overall finish, however, was how Faribault stacked up against its Section 1AA counterparts. One spot ahead of Faribault was Austin in seventh, but the Falcons surged ahead of Winona, Red Wing and Albert Lea.

“Right now, our biggest goal is just state,” Tuma said. “With this new section, we’re ranked right up there. At the Faribault Invite we beat all the teams besides Austin that we’re competing with at sections, so that’s looking really good. It should turn out to be a really good season.”

Individually, Tuma and Bouadib are aiming to work together and lead from the front of the pack.

“We’re a team and we work together to get where we need,” Bouadib said. “Even during the race there was a lot of communication between us while running. You’re always looking for your teammate to try to cheer them and move them forward. That’s Faribault High School.

“It’s always about pushing each other to break our limits, so the physical job is always done by the time we get to the race. Then it’s all mental to try to find the motivation to push you toward the end.”

While the boys squad left last week’s Faribault Invitational encouraged about where it stands, the girls team was motivated to improve on what it thought was a sluggish performance at its home invite.

The Falcons finished 11th out of 15 teams, and most crucially behind Section 1AA counterparts Austin and Red Wing. Less than a week later, the improvements are already starting to show.

While Faribault lost Tuesday’s dual 22-35, it was an overall better showing against a Northfield team that snagged second at the Faribault Invite. That started up top with Brynn Beardsley and Felicity Foxhoven, who finished second and fourth Tuesday while each dropping more than a minute from their times last week.

Even in head-to-head battles, Beardsley beat Northfield’s Clara Lippert to the line Tuesday after Lippert beat both by nearly a minute last week. While Lippert still finished 14 seconds ahead of Foxhoven on Tuesday, Foxhoven beat Northfield’s Adriana Fleming and Peyton Quass, who both beat her last week.

“So far it’s been pretty good,” Foxhoven said. “Last race was not the best, but I feel like the season is going to be really strong and in this race I felt good.”

At Tuesday’s meet, Beardsley dipped underneath 21 minutes with a time of 20:48.4, while Foxhoven recorded a time of 21:12.4. Both said their individual goal this season is to break the 20-minute barrier.

Also scoring points Tuesday for the Falcons were Cecelia Hoisington in ninth, Mariana Foxhoven in 10th and Gabbie Boevers in 15th.

The team goal for the girls is the same as the boys: to take advantage of the new section and qualify for state as a team.

“We’re hoping to go to state this year because we moved to a smaller section,” Felicity Foxhoven said. “As of last week we’re placed fourth, but we’re hoping we can move up so we can be in the top two.”