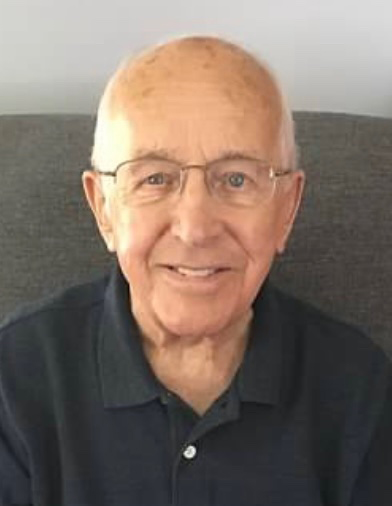 Gordon Velzke 1927–2020 Faribault—After a wonderful life lived, Gordon Henry Velzke was welcomed into the arms of his Lord and Savior on November 19, 2020, at the age of 93. Funeral services will be held at Trinity Lutheran Church, Faribault on Monday, November 23, 2020, at 1:00 p.m. with the Reverend Paul Rieger, officiating. Interment will be held at Maple Lawn Cemetery, Faribault with veteran's military rites provided by Rice County Central Veteran's Association. Visitation will be held for one hour prior to the services at the church on Monday. Arrangements are being completed by Boldt Funeral Home, Faribault. Gordon was born in Faribault, on October 9, 1927 to Henry Sr. and Anna (Schwichtenberg) Velzke. He was baptized, confirmed, married, and was a lifelong member of Trinity Lutheran Church in Faribault. Gordie attended country school for a couple years and then went to Trinity Lutheran School. He left high school to help on the family farm and received his GED while in the service. During World War II Gordie enlisted in the Army Air Corps and was stationed in South Carolina. On September 6, 1952, Gordie married Eleanor (Traeger); they shared a wonderful marriage for 68 years. In 1956, he began working at Borchert Motors; in 1969 he became co-owner of Borchert Motors and was involved with the company until his retirement on his 90th birthday. Throughout his life Gordie was involved in many activities in his church including Trinity Men's Softball League, Men's Morning Bible Study and Trinity School Board. Gordie was a member of the American Legion, working with the local school patrols for many years and serving as a Post Commander. He always looked forward to fishing and hunting, be it ducks, turkeys, pheasants, deer, or elk. Even if he came home empty-handed he would talk about how blessed he was to be out in God's great outdoors. He instilled that same appreciation in his grandchildren. In his free time he enjoyed reading, playing golf, using his many tools to fix anything broken, making sauerkraut and Christmas cookies. In his later years he developed a talent for crafting duck calls. He always enjoyed getting together with his family and many friends to socialize and have a good game of cards. Gordie was a kind and gentle man, who loved God and his family beyond measure. He is survived by his daughters, Jean (and Dana) Larson and Pam (and Marc) Shaft; three grandchildren, Bret (and Katie) Larson, Alex (and Lexi) Larson, and Katelin Shaft; two great grandchildren, Oliver and Henry Larson; one sister, MaryAnn (and Ray) Sanders; along with others who he was blessed to call family and friends. He was preceded in death by his beloved wife Eleanor, his parents, brothers and sisters in-law; Milton (Ruby) Velzke, Warren (Betty) Velzke, and Henry (Hank) Velzke Jr. The family would like to thank Faribault Senior Living and Brighton Hospice staff for their support, kindness and care of our dad. Please visit boldtfuneralhome.com for information and guest book.