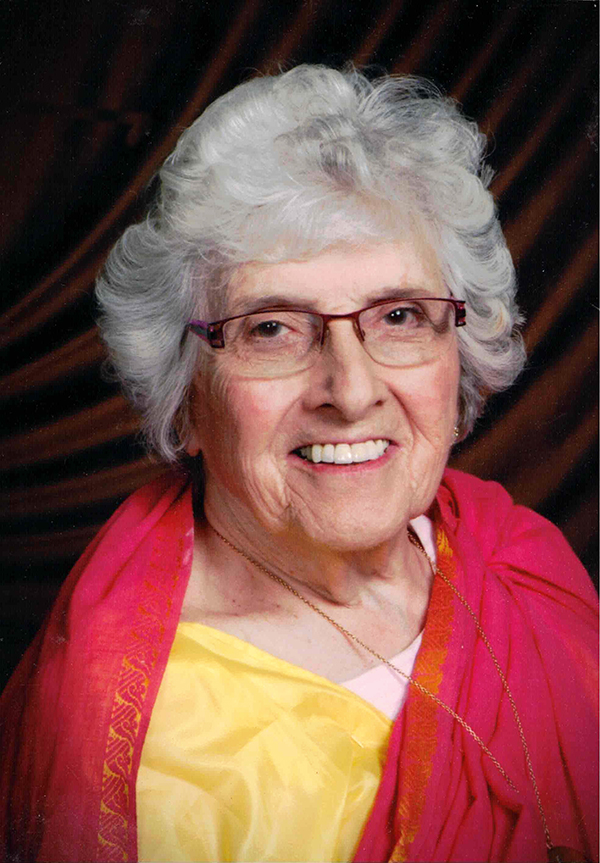 Helen Spitzack 1930–2020 Faribault —Helen Marie (Naumann) Spitzack age 90, of Faribault, died Wednesday, October 14, 2020 at Brookdale Senior Living, Faribault. Private family services will be held. Interment will be at Concordia Cemetery, North Morristown. Visitation will be held at the Boldt Funeral Home, Faribault on Sunday, October 18, 2020 from 2:00 – 4:00 p.m. Helen Marie (Naumann) Spitzack was born on August 5, 1930 in Kodaikanal, Tamil Nadu, South India, to Lutheran missionaries, The Rev. John G.P. and Marie (Reuter) Naumann. Helen's life journey began when her father "borrowed" a rickshaw cart and pulled her mother up a hill in the rain to get to the Van Allen Hospital, where Helen was born. For nine months of the year, she and her siblings attended elementary boarding school at Kuehne Memorial School ("Loch End") in Kodaikanal ("Kodai"). She was later enrolled in the 1948 class at Kodaikanal International School ("Highclerc"). During breaks from school, she sometimes accompanied her father on visits to local villages to help teach Bible stories. She told many fond tales and colorful stories about her youth in India. In 1946 she came to the United States to stay when her parents brought her to the U.S. while on a furlough from their mission work. Helen finished her high school degree and began college coursework at Bethany Lutheran College in Mankato. She also completed courses and workshops at Concordia University--River Forest, Concordia University--St. Paul, and Minnesota State University--Mankato. She was in the first group of women to attend Concordia University--St. Paul. She was pulled out of college to become an emergency teacher at Trinity Lutheran Church & School--Lone Oak in Eagan, MN, and then was called to teach at Trinity Lutheran Church, North Morristown, MN. While there she met Clarence Spitzack (1924-2010), and after briefly working at E.F. Johnson in Waseca, she married him on May 2,1952 and they raised four children, actively promoting their academic, religious and musical education. Later she worked at the public school in Morristown as a secretary and teacher aide for a class of students with developmental disabilities. Later Helen again worked at Trinity Lutheran School in North Morristown as a classroom teacher, aide and art appreciation teacher. For 35 years she volunteered as a choir director in her home congregations, Bethlehem Lutheran Church and Trinity Lutheran Church, both in Morristown. She was also active as a Sunday School and Vacation Bible School teacher and superintendent, as well as a leader in the Lutheran Women's Missionary League (LWML). Helen gave beginning piano lessons to children and adults in her home and threw frequent tea parties and recitals with sing-alongs for her piano students and their families. She enjoyed playing the piano, cooking Indian food, singing in Sweet Adelines, sewing, calligraphy, creating hand-made cards, drawing and painting. She was active in the Waseca Art Guild, where she participated in numerous art courses and field trips, including a trip to New York City. With a group from Wheatridge Ministries, she returned to her beloved India for a visit in the 1990s, 50 years after she had left for America. Several years after her husband's retirement, Helen and Clarence sold the family farm in North Morristown and moved to Faribault, where after a long struggle with Alzheimer's disease, Clarence preceded her in death in 2010. In addition to her husband and parents, she was preceded in death by two sisters, Eunice Nissen and Irene Cotter, and two nephews, Jeremy Nissen and Philip Ahrens. Helen is survived by three siblings: Dr. Miriam McCreary (Kenneth Kaufmann) of Mendota Heights, MN; John Naumann (Faye) of Arden Hills, MN; and Dr. Walter (Sandra) Naumann of Accident, MD; her children: James (Nancy) Spitzack of Waukesha, WI; Jonathan Spitzack of Brooklyn Center, MN; Rebecca Spitzack of Faribault, MN; and Mark Spitzack of Minneapolis; three granddaughters: Sarah (Scott) Gustafson of Waterford, WI; Laura (Nick) Jasurda of Parker, CO; Amy (Matt Meier) of Sun Prairie, WI; and five great-grandchildren: Caden, Kylie and Kasey Gustafson, and Logan and Natalie Jasurda. One of Helen's favorite images from scripture was the cross and crown. Following in the path of Christ's death and resurrection, she endured the crosses of this life and has now journeyed on to join Jesus in paradise and to obtain the crown prepared for her: "Be faithful until death, and I will give you the crown of life." (Rev. 2:10). Visit boldtfuneralhome.com for information and guestbook.