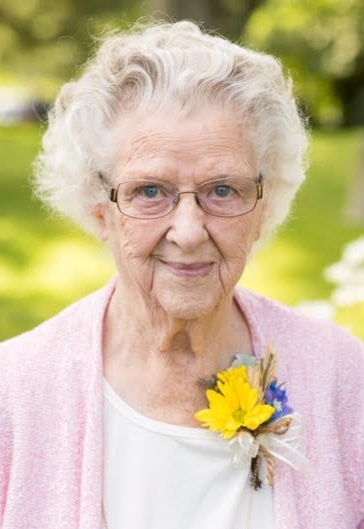 Alice L. Langer 1923–2020 Northfield—Alice Leona Langer, age 96, of Northfield, passed away Tuesday, August 4, 2020, at Three Links Care Center, Northfield, MN. Alice was born on October 15, 1923, in her grandparent's house in Shieldsville, MN to John Lyman Gruber Sr. and Mary Agnes (Crawford) Gruber. She grew up in the Shieldsville/Faribault areas attending a country elementary school near their home. She graduated, at the age of 16, from Faribault High School in 1940. She attended Mankato Teachers College and received a two-year diploma in elementary education. After graduation, she taught at St. Mary's Catholic School in Sleepy Eye, MN. It was during that time that she met Donald Joseph Langer, who won her heart through funny, cryptic letters and random visits (supervised, of course, by the nuns). Alice and Donald married on June 7, 1948, at Immaculate Conception Church in Faribault, MN. She and Donald farmed in Greenvale Township, north of Northfield, MN. Alice spent the early years of her marriage as a homemaker raising 13 children with help from Don. During that time she was active in her children's education, the Working Huskies 4-H Club, St.Dominic's Catholic Church, and local and state politics. Alice later returned to Mankato State University earning a Bachelor of Science in Social Work and Corrections. She was an avid reader of books, newspapers, and magazines and was always willing to discuss current events and politics. She was proud of her children and their accomplishments and was ever so proud, supportive, and amazed by her many grandchildren. Alice was intensely interested in the preservation of the environment and nature, especially as it pertained to farm and wetlands and natural habitats. She frequently took her grandchildren to visit nature centers to learn the maple syrup process and bird and butterfly identification. But, the thing that she may be most remembered for by her family will be her simple, yet delicious pancakes! Alice is survived by her children Michele Waddell of Owatonna, Lioba (John) Forman of Albert Lea, Gregory (Victoria) Langer of Northfield, Germaine (Gary) Neumann of Rochester, Ma Donna Geibe of Elko, La Nette (Steve) Aeling of Hewitt, Lawrence (Diane) Langer of Northfield, Lorraine (Gretchen Schlabach) Langer of DeKalb, Illinois, Linus (Mary) Langer of Northfield, Gervase (Christine Zweber) Langer of Lakeville, Mathew (Shelley) Langer of Northfield, Machias (Carol) Langer of Kenyon, Geneva (Scott) Fitzsimonds of Minnetrista; sisters Grace Silkey of Northfield and Irene Green of Fridley; 31 grandchildren Michael Waddell, Jennifer Black and Zachary Waddell; Joshua and Jeremiah Forman and Mariah Lynne; John Langer; Jed, Reid and Aubrey Neumann; Felicity Frank, CJ and Andrew Geibe; Madison LaTourelle, Dakota Aeling and Autumn Flickinger; Rosemary Lemus, Elizabeth, Jameson and Katey Langer; Albany Genco and Harmony Zweber-Langer; Nathan Langer, Stephanie Paddock and Savannah Snelgrove; Ryan, Adam, Caleb and Nicholas Langer; Bram and Berit Fitzsimonds; 38 great-grandchildren and 2 great-great-grandchildren. She was preceded in death by her husband Donald Joseph Langer, son-in-law Charles Waddell, granddaughter Rebecca Jean Langer, and siblings Louis Gruber, Marie McDonald, Anna Huss, George Gruber, and John Gruber. Mass of Christian Burial will be held at Church of St. Dominic's, Northfield, MN on Monday, August 10, 2020, beginning at 10:00 AM. Visitation will be held at Bierman Funeral Home, Northfield, MN on Sunday, August 9, 2020, from 4:00 PM to 7:00 PM. Alice will be laid to rest next to her husband, Donald, at Calvary Cemetery in Northfield. biermanfuneralhome.com. In lieu of flowers, memorials are preferred to Riverbend Nature Center, Faribault, MN.