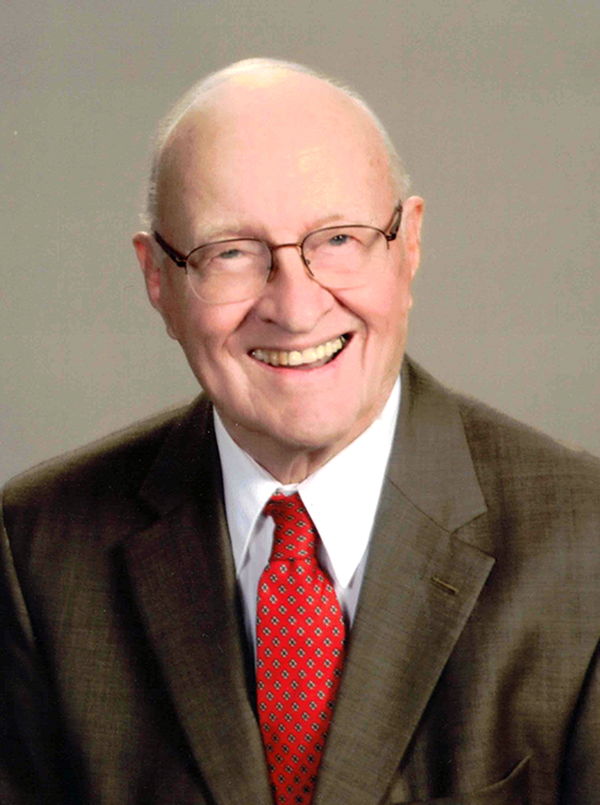 Francis Miller 1926–2020 Faribault —Francis R. Miller, age 93 of Faribault, died Tuesday, September 15, 2020 at Reflections End-of-Life Care Suites on the Three Links campus in Northfield. A private funeral service will be held on Friday, September 18, 2020 with Rev. Jeff Sandgren officiating. Interment will be at Maple Lawn Cemetery, Faribault. A public celebration of life will be held at a later date. Arrangements are being completed by Boldt Funeral Home, Faribault. Francis Miller, son of Robert and Astrid (German) Miller was born November 6, 1926 near Elko, Minnesota. He grew up on the family farm and graduated from Northfield High School in 1944. He served in the U.S. Army at Fort Snelling and Fort Riley, Kansas. He graduated from St Olaf College in 1950 with a degree in economics. While attending St Olaf, Fran met JoAnn Foss at the roller rink at the fairgrounds in Faribault. On August 12, 1950, they were married at Gol Lutheran Church in Kenyon, and the marriage was blessed with three children. Fran was a State Farm Insurance agent in Faribault, and in the late 1950s he became the chief accountant of Northwestern National Life Insurance in Minneapolis. In 1962 Fran became treasurer and controller of the Faribault Woolen Mill Company, a position that he held for thirty years. Fran was known to many because of his involvement in the community and numerous volunteer efforts which included active membership and leadership roles in the Jaycees, United Way Board, First English Lutheran Church, Our Savior's Lutheran Church, Faribault School Board, Northwestern National Life Insurance employee organization, Administrative Management Society, Faribault Exchange Club, Junior Achievement, Faribault AVTI (now South Central College) Accounting Advisory Committee, curriculum advisor for Mankato, Rochester, and Faribault technical colleges, Faribault Country Club board, Faribault Chamber of Commerce, Faribault Economic Development Authority, Rice County Historical Society, St Lucas Board of Directors, and District One Hospital Board of Directors. Throughout almost 70 years in Faribault, Fran devoted countless hours to serving his community. Fran's hobbies included golf, bowling, and historical research. Most of all he enjoyed spending time with people. He was genuinely interested in everyone he met. He always had a quit wit and jokes to share along with his smile. It's impossible to imagine Fran without his smile—whether at work, at church, having coffee with friends, at the bowling alley or golf course, or at Chamber of Commerce events. Fran loved his family—his wife of 62 years, JoAnn, their children, and his extended family. He was always supportive and encouraging. He was a wonderful man. In December 2011, Fran and JoAnn moved to Faribault Senior Living, where Fran was a friend to many residents and staff. JoAnn passed away in November 2012. In June 2020, Fran moved to memory care at Mill City Senior Living where he continued to bless those around him with his friendly and helpful nature. Following a stroke, Fran's last week was at District One Hospital and then Reflections at Three Links in Northfield. Fran is survived by his children, Nancy (and Jim) Johnson of Northfield, Douglas (and Patricia) Miller of Faribault, David (and Noelle) Miller of Faribault; seven grandchildren, Steven Johnson of Woodland Hills, CA, Laura (and Stephen) Huck of Eden Prairie, Eve (and Nathan) Choma of Minneapolis, Eleanore Miller of Minneapolis, Stacy McDaid of Bloomington, Zoe Buscho of Winnipeg, and Alison Buscho of Rosemount; five great-grandchildren, Isabell Stenbakken Miller, Gannon McDaid, Porter Kleckner, Nels Choma, and Louis Huck; two sisters, Sylvia Duffney of Farmington, and Sonja Anderson of Apple Valley; and many nieces and nephews. He was preceded in death by his wife, his parents, and six siblings, Arthur Spende, Ruth Witt, Grace Miller, Evelyn Cloutier, Irving Miller, and Harvey Miller. The family is sincerely grateful for the care provided to Fran at Faribault Senior Living, Mill City Senior Living, District One Hospital, Reflections at Three Links in Northfield, and Allina Hospice. Memorials may be directed to Our Savior's Lutheran Church or the Rice County Historical Society. Visit boldtfuneralhome.com for information and guest book.