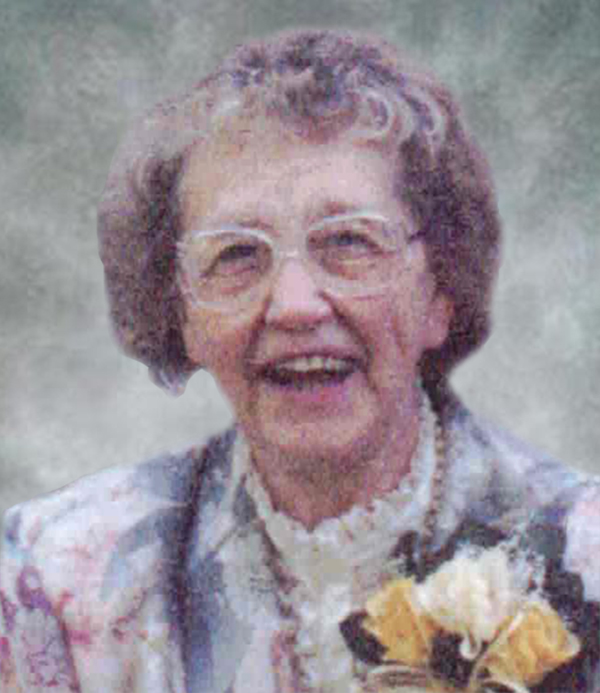 Delores Jenson 1923–2020 Faribault —Delores Jenson, age 96, of Faribault, died on Monday, July 27, 2020 at The Emeralds at Faribault. Funeral services will be held at the Boldt Funeral Home, Faribault, on Sunday, August 2, 2020 at 1:30 p.m. With the Reverend Ray Snesrud, officiating. Interment will be at Meadow Ridge Memorial Park, Faribault. Visitation will be at the Boldt Funeral Home for one hour prior to the service on Sunday. Delores, the daughter of Henry and Selma (Schroeder) Keck, was born September 23, 1923 in Claremont. She grew up on the family farm and went to school in Claremont. She married Sidney Jenson on September 14, 1944 at Claremont and he preceded her in death on June 3, 2001. They made their home in Kenyon at the Jenson family farm until moving to Faribault in 1956. She was previously employed with the Galaxie Motor Lodge, Faribault Foods and loved volunteering at the clothes closet. Delores loved the Lord and lived a strong faith. Most of all she loved to watch her grandchildren and spend time with her family. Delores will be missed by her large family. She is survived by three daughters, Sandra Mador of Faribault, Kathleen (and Thomas) Glor of Surprise, AZ, and Renae (and Larry) Jones of Faribault; three sons, Dennis (and Carolyn) Jenson of Surprise, AZ, Gary (and Kathy) Jenson of Dacono, CO and Jeffrey (and Linda) Jenson of Rosemond, CA; 13 grandchildren, Todd Mador, Nickolyn (and Steve) Lewison, Shane (and Stephanie) Jenson, Jaime (and Chris) Buley, Brandon (and Nikki) Glor, Cory (and Sarah) Jenson, Jamie Jenson, Tyler Jenson, Justin (and Natasha) Jenson, Brittany (and Fred) Castillo, Cody Jenson, Jeremy Jones and Crystal Jones; 24 great grandchildren; 11 great great grandchildren; siblings, Lester (and Kathy) Keck of Owatonna, Ronald (and Jackie) Keck of San Diego, and Barbara (and Pat) Lennon of Owatonna; one sister in law, Shirley Keck; and many nieces, nephews and other relatives. She was preceded in death by her parents; her husband, Sidney; sisters, Bernice (and Lloyd) Jystad, Marlene Keck, Helen (and Don) Sahl and Mary Ann Yocum; brothers, Kenneth, Marvin (and June) and Earl (and Jeanne) Keck; and one granddaughter, Teresa Bass. Visit boldtfuneralhome.com for information and guest book.