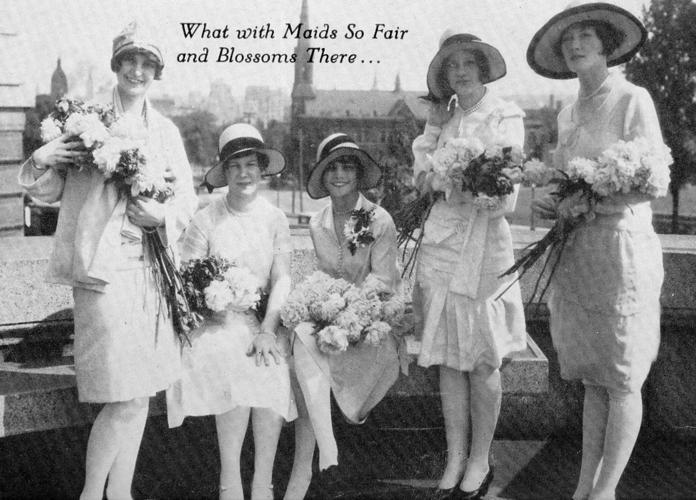 Brand Peony Farms Peony Queens, circa 1929. In 1895, according to a 2012 story in the Daily News, Brand’s collection of peony varieties grew to more than 1,000 — making it one of the world’s largest collections of flowers. By 1920, peony shipments were made to all parts of the world. (Photo courtesy of the Rice County Historical Society) 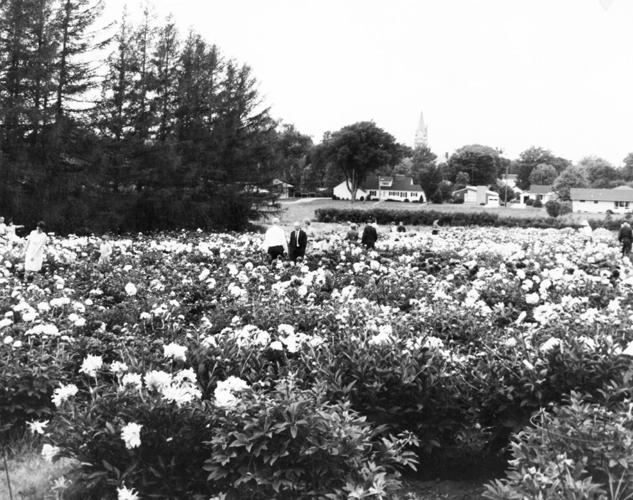 Brand Peony Farms was located in the southeast part of Faribault near River Bend Nature Center. The popularity of the Brand Peony Farm once earned Faribault the title of "Peony Capital of the World." (Photo courtesy of Rice County Historical Society) 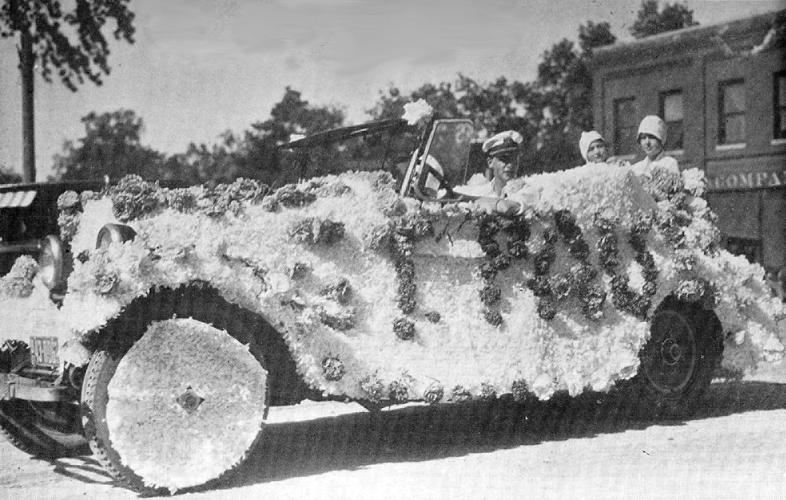 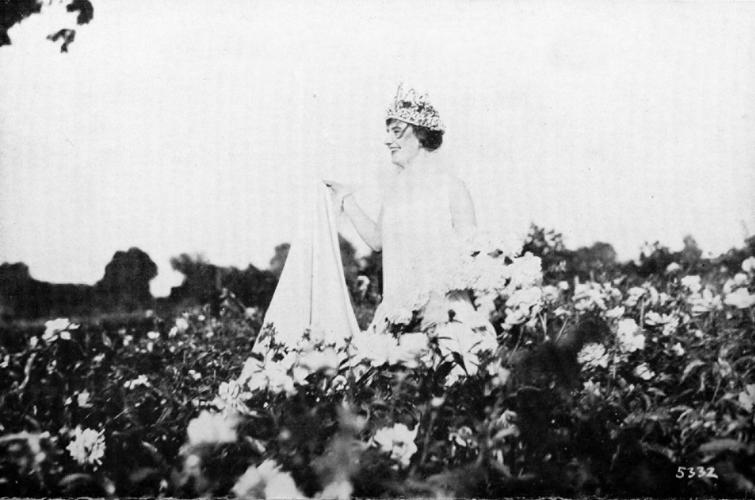 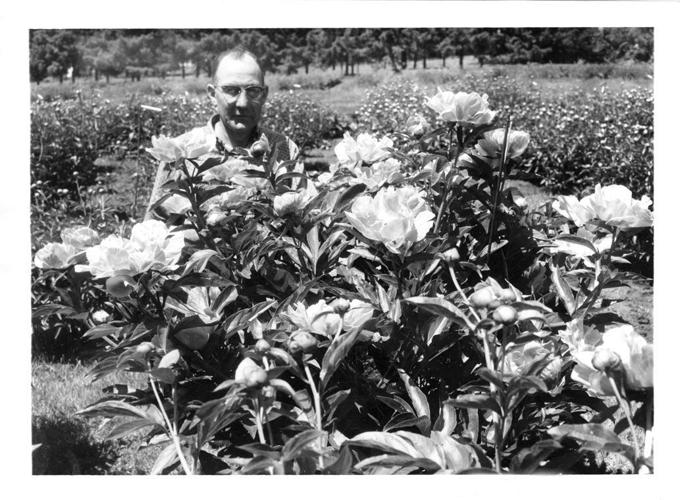 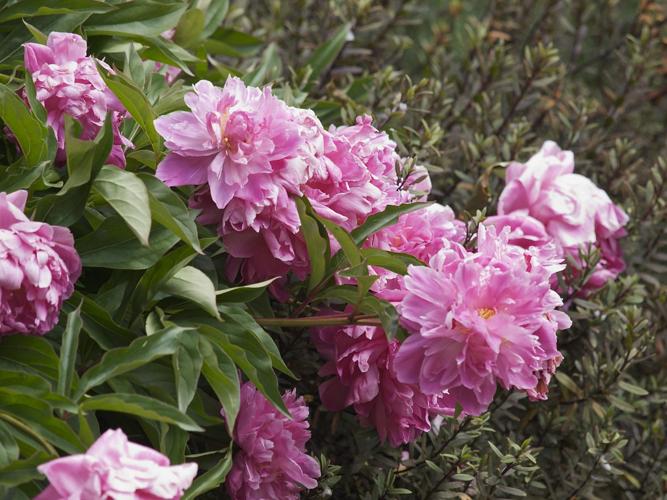 Pioneers brought peony plants with them when they made their homestead in Minnesota, according to the Minnesota Peony Society. There were also several early internationally known peony hybridizers who made there home here in Minnesota. They included the Brands of Faribault. (Flickr) 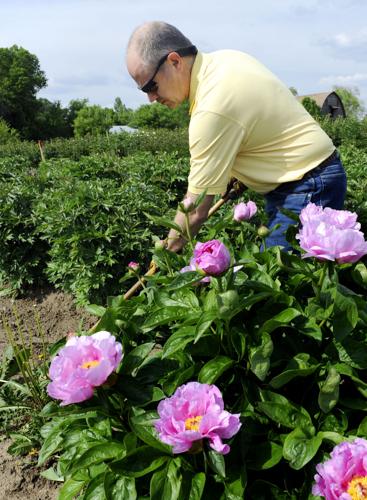 In this May 2010 photo near Maple Plain, Minn., Keith Swenson, who runs a family gardening business, tills the ground between rows at a peony acreage. (AP Photo/Jim Mone)

Brand Peony Farms Peony Queens, circa 1929. In 1895, according to a 2012 story in the Daily News, Brand’s collection of peony varieties grew to more than 1,000 — making it one of the world’s largest collections of flowers. By 1920, peony shipments were made to all parts of the world. (Photo courtesy of the Rice County Historical Society)

Brand Peony Farms was located in the southeast part of Faribault near River Bend Nature Center. The popularity of the Brand Peony Farm once earned Faribault the title of "Peony Capital of the World." (Photo courtesy of Rice County Historical Society)

Pioneers brought peony plants with them when they made their homestead in Minnesota, according to the Minnesota Peony Society. There were also several early internationally known peony hybridizers who made there home here in Minnesota. They included the Brands of Faribault. (Flickr)

In this May 2010 photo near Maple Plain, Minn., Keith Swenson, who runs a family gardening business, tills the ground between rows at a peony acreage. (AP Photo/Jim Mone)

Faribault is known for many impressive things, from being the birthplace of the Tilt-a-Whirl to its one-of-a-kind Cheese Caves. But many people may not know that it also used to also have a very distinct title: the Peony Capital of the World. Thanks in a large part to Faribault’s former Brand Peony Farm, the city attracted thousands of people every June to come see its flowers in bloom. And, while Brand Peony Farm is no longer in operation, its legacy still affects Faribault to this day.

Brand came to Minnesota from Fond Du Lac, Wisconsin in the summer of 1867 with the specific intention of starting a nursery, though at first, he focused on growing and selling trees to early settlers so they could start family orchards. His nursery was on 50 acres of land and is one of the first nurseries established in Minnesota.

While the nursery cultivated a variety of plants and flowers (and, interestingly enough, Angora cats, bred at the nursery’s cattery), Brand’s favorite type of flower was the peony. In fact, he dedicated a whole acre to peonies when he first began, growing three types of the flower—one red, one pink and one white. But Brand began experimenting and trying to create more varieties. By 1895, Brand’s collection of peony varieties had grown to more than 1,000, making it one of the world’s largest collections of flowers.

In 1899, Oliver’s son Archie joined the business, according to Rice County Historical Society records, and the two men worked together to breed more peonies. Oliver retired in 1911, and Archie hired Myrtle Gentry to “take charge” of the office in 1918. Within two years, she had become a partner in the firm. The business continued to grow and relied heavily on mail orders, shipping its peonies and other plants across the world by the 1920s. By then, Faribault was known as the “Peony Capital of the World.”

A catalogue from February 1915 describes different “collections” offered by Brand Peony Farm, ranging from the “One dollar and a quarter” collection, which included three types of peonies, to the “Twenty-five dollar” collection (strangely, costing $32), which included 36 types. The least expensive peony varieties cost 50 cents, while the two most expensive varieties — the pink Martha Bullock and crimson Mary Brand varieties — cost a whopping $15 each (about $180 in today’s money).

By the early 1900s, Brand Peony Farm had established a reputation for itself across Minnesota — and beyond.

Part of its success came from its presence at local peony shows. According to an article written by Pauline Schreiber for the Rice County Historical Society’s newsletter, Archie Brand entered his first peony show in 1913, bringing six entries, at the University Farm in St. Paul. In 1923, he exhibited 23 new varieties at the American Peony Society’s national show, which was held in St. Paul. His flowers won both the gold and silver medals.

“The Brand Peony Farm’s reputation grew because of that show, which is why Faribault was selected for the site of the Northwest Peony Show in 1927,” Schreiber wrote.

By this time, thousands of people visited Faribault in June to see the peonies in bloom. The flower had become so meaningful to the region that the city of Faribault hosted a Peony Festival between 1927 and 1929.

The first Peony Festival took place during June 1927. During the festival, downtown store windows and streets were decorated with fresh peonies, and there was a coronation of royalty, a costume dance with a 17-piece orchestra and other festivities. There was a parade of floats, cars and horse-drawn vehicles, decorated with 80,000 peony blooms donated by Brand Peony Farm. The parade route traveled along Central Avenue and ended in Central Park, with prizes given for the best floats.

“So it was an honor, not just to officials of the Brand Peony Farm who lobbied for the show to be held in Faribault, but the larger community as well, to be selected to host such a well-known flower show,” Schreiber wrote.

The festival grew every year, until the 1929 event featured a 3-mile long parade, bands from Minneapolis and St. Paul, local bands and the Shattuck Military School. However, after the stock market crashed in October 1929, the local economy was severely affected — and the festival was no more.

“The cost associated with organizing the peony parade and festival could not be sustained by the Brand Peony Farm and Faribault community, once the Great Depression began to descend on Rice County and the nation,” Schreiber wrote.

While festival didn't to continue, the Faribault community still wanted to celebrate peonies in some way. Brand Peony Farm continued to stage a local June peony show until the State Bank of Faribault agreed to take over, holding the show in the lobby of its newly opened building. Hundreds of people attended, and the show continued for many more years.

Brand continued to find success with his peonies as well. In 1933, he won the Gold Medal Award at the National Peony Show in Chicago for his peony seedling, the Hansine Brand (named after his wife), according to Rice County Historical Society records.

Brand Peony Farm went through great changes in the 1950s. Minnesota Historical Society records show that Archie Brand died in 1953, and in 1956, the farm was bought by brothers Bob and Archie Tischler. According to an article published in the Faribault Daily News on June 12, 1998, Bob Tischler had helped decorate floats with peonies for the Peony Festival parade when he was younger, which was where his love for peonies began. Records show that he purchased full ownership from his brother in 1967, and he retained that ownership until 1976, when he sold it to Farmer Seed and Nursery so he could retire. (He later opened Tischler Peony Garden in another part of Faribault, continuing the business until 2002.)

The city of Faribault acquired the Brand Peony Farm property in the early 1990s, and it was divided into about 56 lots for development. By the early 2010s, all of the Brand buildings had been torn down.

Yet Brand Peony Farm’s legacy continues to affect Faribault and the surrounding area to this day. Stan Mader, owner of Faribault Garden Center, said peonies have fallen in popularity, but there are still some people who ask for them because of nostalgia.

“Most people don’t even remember them,” he said. “But there’s a few people who come in because their folks and grandparents had peonies.”

Mader was a friend of the late Robert Tischer, and he said he sold many peonies back when Tischer was still running his farm. He added that Brand Peony Farm is responsible for many of the nurseries and greenhouses that sprang up in the area, carrying Brand’s peony varieties.

“Historically speaking, the Brand Peony Farm started Faribault’s nursery and plant industry,” Garwood said. “It’s fun to drive around town today and see all the peonies that are around. Although they might not all be of that old stock, it is likely that most of them are. That’s really cool to still be able to see a beautiful piece of the past.”

Grace Webb Bradt is a freelance writer based in Mankato.

Peonies have long been a favorite of gardeners across the region, even though they only bloom for a few weeks.

According to "Northern Gardener," there are three types of peonies: herbaceous peonies, tree peonies and intersectional peonies (a combination of the other two). They come in a range of colors, from deep red to white, and a range of flower types, from single peonies to big puffy “bomb doubles.”

According to a Faribault Daily News interview with Robert Tischler, it takes 15 to 20 years to take a seedling peony plant and develop it into something that can be marketed and sold. But, while peonies take some time to develop, they can last for decades if they’re properly cultivated. They require full sun, regular fertilizer or compost applications and well-drained soil.

The flower was recorded as being used for flavoring food in ancient Chinese texts, and it was also cultivated for medicine in China since at least the sixth century. It is still one of the traditional floral symbols of China, where it is known as the “king of the flowers.”