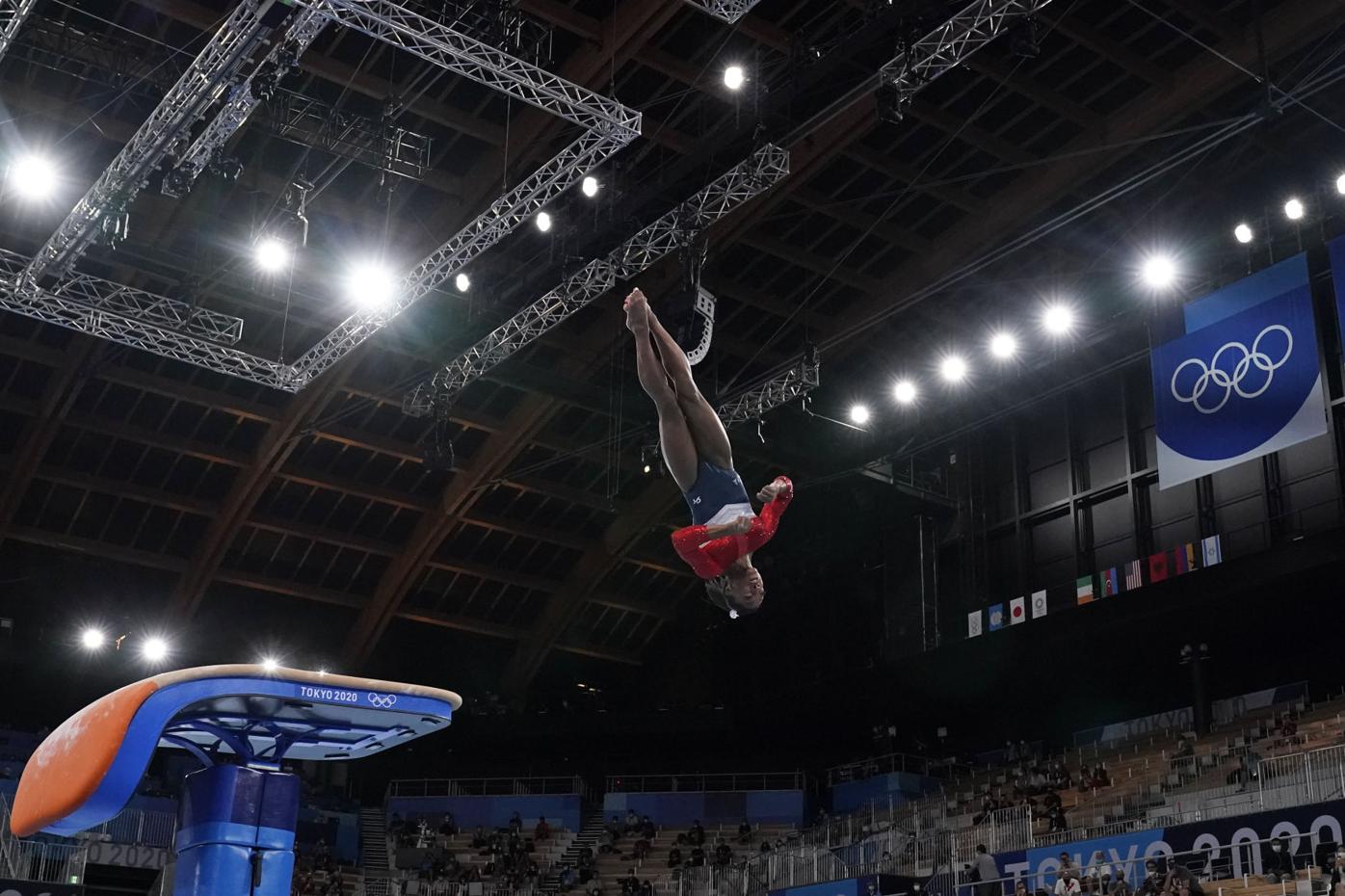 Simone Biles, of the United States, performs on the vault during the artistic gymnastics women's final at the 2020 Summer Olympics, Tuesday, July 27, 2021, in Tokyo. (AP Photo/Ashley Landis) 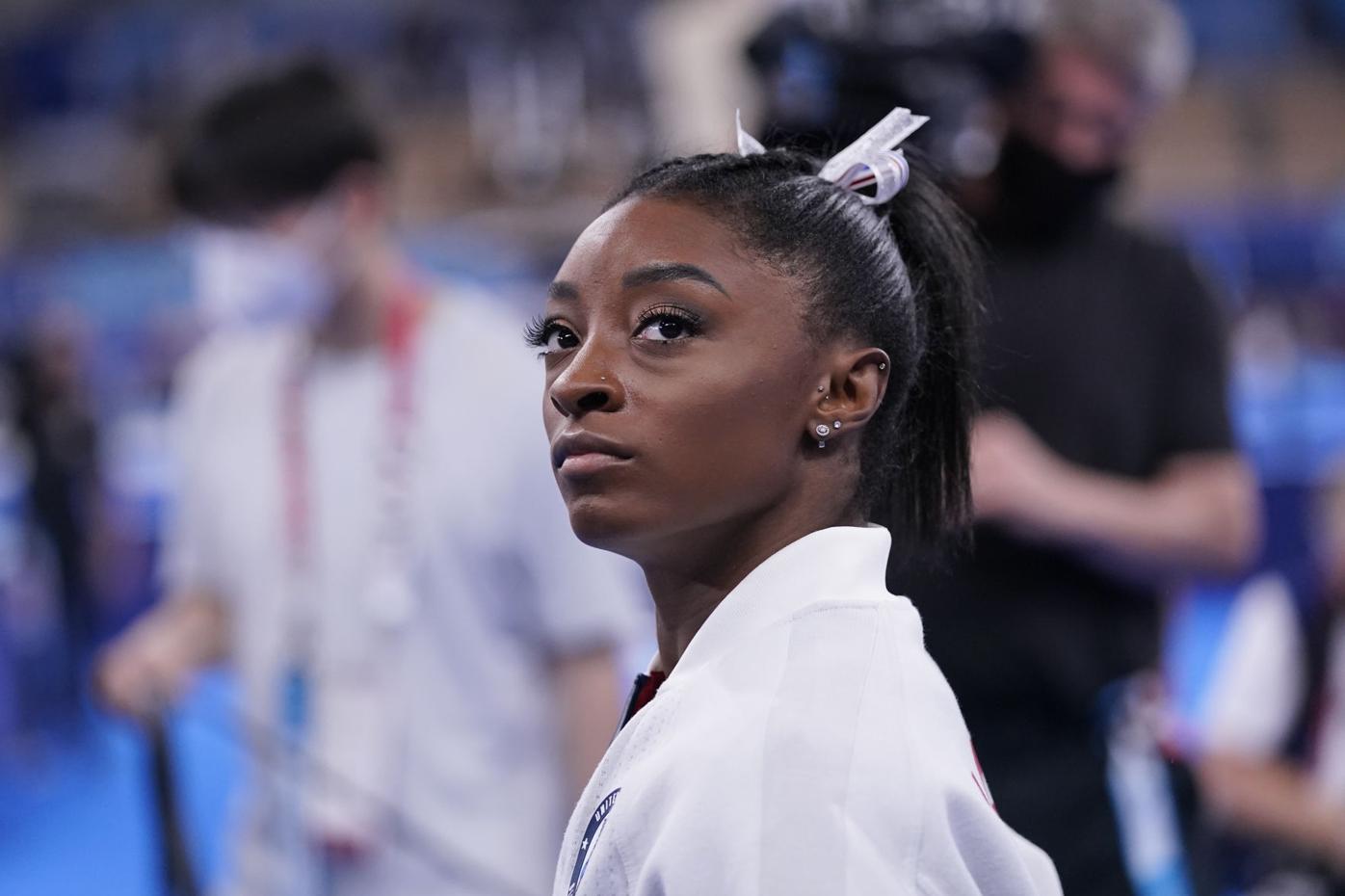 Simone Biles, of the United States, waits for her turn to perform during the artistic gymnastics women's final at the 2020 Summer Olympics, Tuesday, July 27, 2021, in Tokyo. (AP Photo/Gregory Bull) 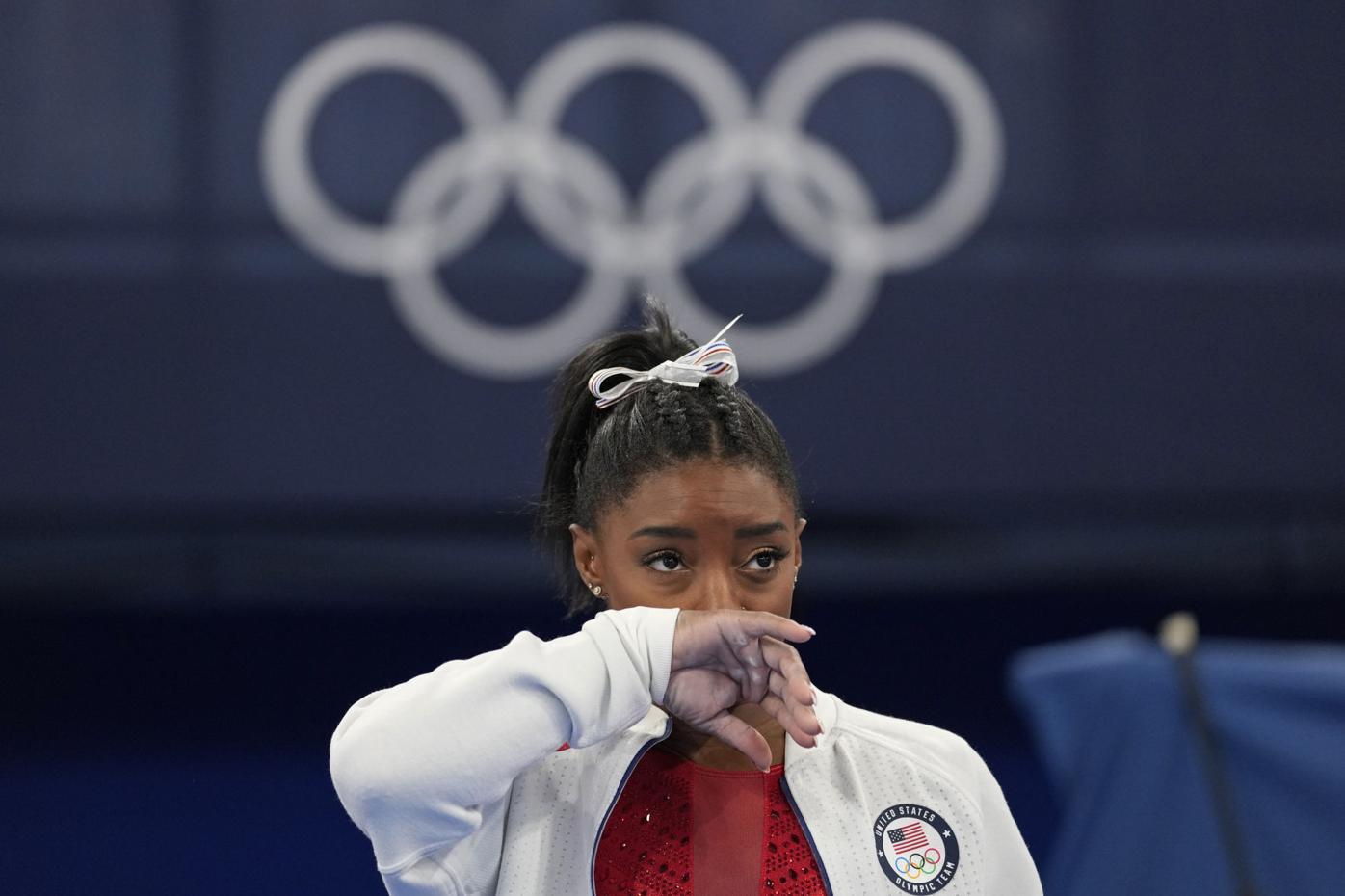 Simone Biles, of the United States, watches gymnasts perform after an apparent injury, at the 2020 Summer Olympics, Tuesday, July 27, 2021, in Tokyo. Biles withdrew from the team finals. (AP Photo/Ashley Landis) 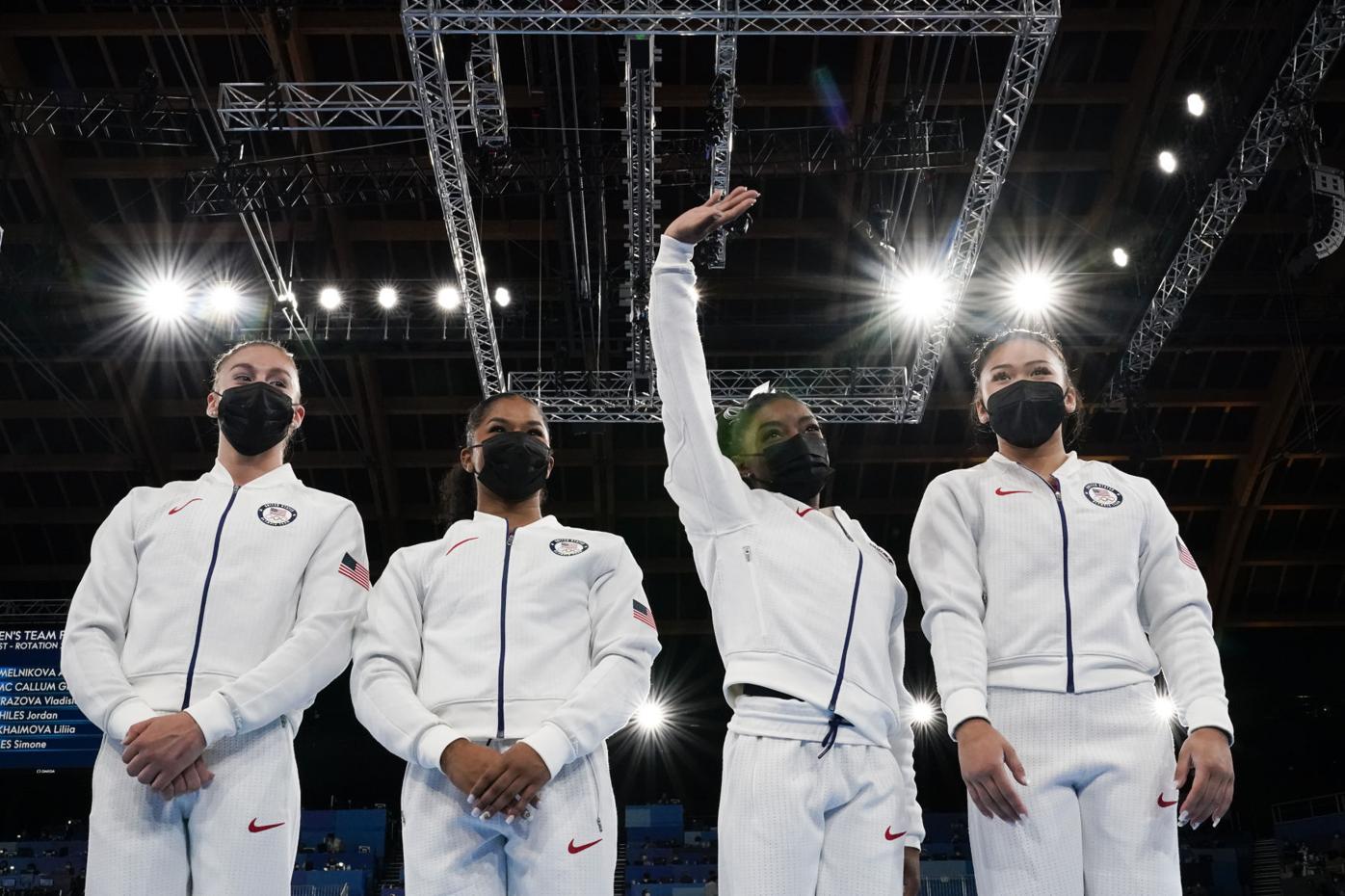 Simone Biles, of the United States, performs on the vault during the artistic gymnastics women's final at the 2020 Summer Olympics, Tuesday, July 27, 2021, in Tokyo. (AP Photo/Ashley Landis)

Simone Biles, of the United States, waits for her turn to perform during the artistic gymnastics women's final at the 2020 Summer Olympics, Tuesday, July 27, 2021, in Tokyo. (AP Photo/Gregory Bull)

Simone Biles, of the United States, watches gymnasts perform after an apparent injury, at the 2020 Summer Olympics, Tuesday, July 27, 2021, in Tokyo. Biles withdrew from the team finals. (AP Photo/Ashley Landis)

Biles withdraws from gymnastics final to protect team, self

By WILL GRAVES AP Sports Writer

TOKYO (AP) — Simone Biles arrived in Tokyo as the star of the U.S. Olympic movement and perhaps the Games themselves. She convinced herself she was prepared for the pressure. That she was ready to carry the burden of outsized expectations.

Only, as the women's gymnastics team final approached on Tuesday night, something felt off. And the athlete widely considered the Greatest of All Time in her sport knew it.

So rather than push through the doubts that crept into her head as she's done so many times in the past, Biles decided enough was enough. She was done. For now.

The American star withdrew from the competition following one rotation, opening the door for the team of Russian athletes to win gold for the first time in nearly three decades.

Jordan Chiles, Sunisa Lee and Grace McCallum guided the U.S. to silver while Biles cheered from the sideline in a white sweatsuit, at peace with a decision that revealed a shift not only in Biles but perhaps the sport she's redefined.

"We also have to focus on ourselves, because at the end of the day we're human, too," Biles said. "So, we have to protect our mind and our body, rather than just go out there and do what the world wants us to do."

The Americans — fueled by an uneven bars routine by Lee that not even Biles could match — drew within eight-tenths of a point through three rotations. ROC, however, never wavered on floor. And they erupted when 21-year-old Angelina Melnikova's score assured them of the top spot on the podium for the first time since the Unified Team won in Barcelona in 1992.

The victory came a day after ROC men's team edged Japan for the top spot in the men's final. Great Britain edged Italy for bronze.

Perhaps in more ways than one.

In the five years since Biles and the U.S. put on a dazzling display on their way to gold in Rio de Janeiro, gymnastics has undergone a reckoning. The tectonic plates in a sport where obedience, discipline and silence were long considered as important as talent and artistry are moving.

Biles has become an outspoken advocate for athlete's rights and the importance of proper mental health. There was a time, there were many times actually, where she felt she wasn't right and just powered through because that's what people expected of her.

Not anymore. And the stand she took could resonate far beyond the color of any medal she may win in Tokyo.

Biles is the latest in a series of high-profile athletes, including tennis star Naomi Osaka, who have used their platforms to discuss their mental heath struggles. A subject that was once taboo has become far more accepted and embraced.

Biles posted on social media Monday that she felt the weight of the world on her shoulders after an uncharacteristically sloppy showing during qualifying left the Americans looking up at the ROC on the scoreboard.

The tension affected her practice. It affected her confidence. And when she stepped onto the vault runway, it finally found its way to her performance, too.

She was scheduled to do an "Amanar" vault that requires a roundoff back handspring onto the table followed by 2 1/2 twists. Biles instead did just 1 1/2 twists with a big leap forward after landing. She sat down and talked to U.S. team doctor Marcia Faustin, then headed to the back while the rest of the Americans moved on to uneven bars without her.

When Biles returned several minutes later, she hugged her teammates and took off her bar grips. And just like that, her night was over.

"To see her kind of go out like that is very sad because this Olympic Games, I feel like, is kind of hers," Lee said.

Biles is scheduled to defend her Olympic title in the all-around final on Thursday. She also qualified for all four event finals later in the Games. She said she will regroup on Wednesday before deciding whether to continue.

Biles' abrupt absence forced the Americans to scramble a bit. The finals are a three-up/three-count format, meaning each country enters three of their four athletes on an apparatus, with all three scores counting.

Chiles stepped in to take Biles' place on uneven bars and balance beam. The 20-year-old who made the team with her steady consistency pulled off a solid bars routine and drilled her balance beam set two days after falling twice on the event.

Thanks in part to a little help from ROC — which counted a pair of falls on beam — the U.S. drew within striking distance heading to floor, the final rotation.

Without Biles and her otherworldly tumbling, the U.S. needed to be near perfect to close the gap. It didn't happen. Chiles stumbled to the mat at the end of her second pass, and any chance the U.S. had of chasing down ROC went right along with it.

Not that Chiles or the rest of the Americans particularly cared. The gold might be gone, but something more significant may have happened instead. It's a tradeoff they can live with.

"This medal is definitely for (Biles)," said Chiles. "If it wasn't if it wasn't for her, we wouldn't be here where we are right now. We wouldn't be a silver medalist because of who she is as a person."

Chiles then turned to her good friend. Biles helped convince her to move to Houston to train alongside her two years ago, a decision that turned Chiles into an Olympian. In an empty arena in the middle of Japan with the world watching, Chiles did for Biles what Biles has done for so many for so long. She had her back.