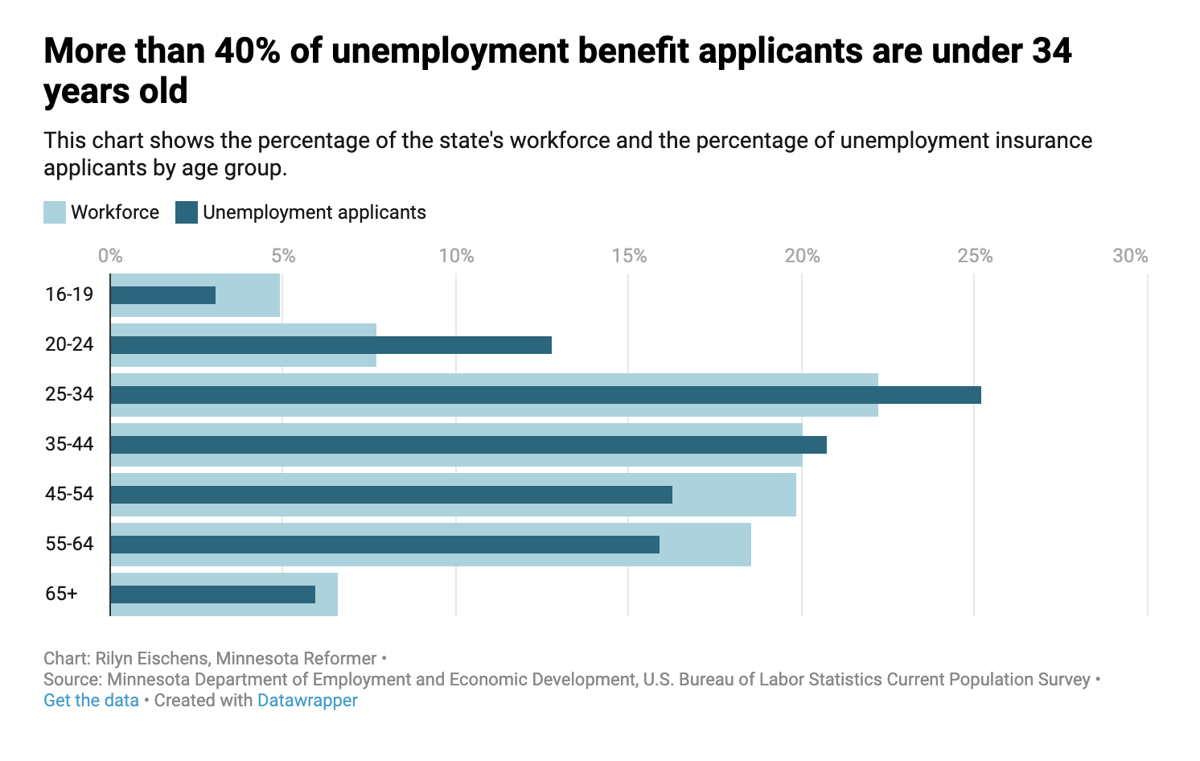 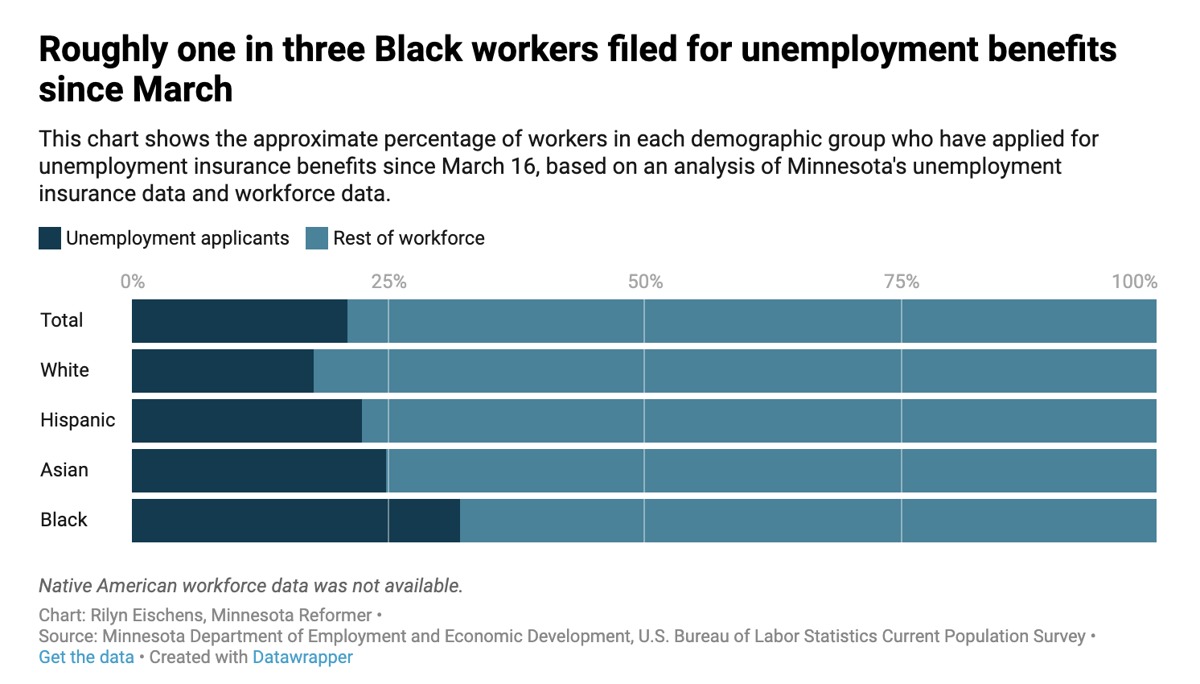 Women, black people and young Minnesotans are suffering the worst of the economic fallout from the COVID-19 pandemic, according to an analysis of recent state unemployment data.

These workers are likely to feel long-term psychological and financial effects from unemployment, raising concerns that the current crisis could worsen Minnesota’s existing economic disparities.

More than 650,000 Minnesotans applied for unemployment benefits between March 16 — when the state expanded its program to include pandemic-related job loss — and mid-May.

That’s over 20% of the state’s workforce. The number of applications filed in those two months surpassed the total for all of 2019.

Although this recession has affected demographic groups more equally than past downturns because of its sheer scale, low-wage workers have bore the brunt of the crisis, said Aaron Sojourner, a University of Minnesota labor economist. This is especially troubling since low-income families may not have access to savings, credit and other resources to weather months of lost pay, he said.

Here are four things to know about Minnesota’s unemployment insurance applicants. Note: data on unemployment benefit applications from the Minnesota Department of Employment and Economic Development was accessed May 18.

1. Roughly one in three Black workers has applied for unemployment insurance

Black workers make up roughly 6% of Minnesota’s workforce and 9% of unemployment applicants since March 16, according to data from the Minnesota Department of Employment and Economic Development. Meanwhile, a disproportionately low number of claims have come from white workers, who account for about 86% of the workforce and 73% of applicants.

Black workers have been laid off at higher rates than any other racial group in Minnesota, in part because people of color in the United States are more likely to work in the industries most affected by the pandemic, including hospitality and service jobs.

Black said she’s also concerned about minority-owned businesses surviving the pandemic. Business owners of color face obstacles under normal circumstances and could be at a disadvantage in getting federal aid, she said.

To help Black families recover from the economic crisis, public officials should ensure aid programs take racial inequities into account and plan ahead to provide funds for communities in need for the next several years, Black said.

2. More women have been laid off, despite making up a minority of the workforce

Women have been disproportionately affected by the layoffs during the COVID-19 economic crisis. This contrasts with the Great Recession, when more men lost their jobs due to the severe downturn of the construction and manufacturing sectors.

More than 350,000 Minnesota women had applied for unemployment benefits by mid-May, compared to about 297,000 men. Women account for just under half the workforce.

3. Younger workers have been laid off at higher rates than older workers

Nearly 40% of unemployment insurance applications have come from workers between the ages of 20 and 34, while workers in that age group account for less than 30% of the workforce.

4. Some rural counties have been hardest hit

The impact of the crisis has varied by geography as well. In Hennepin and Ramsey counties, about 23% of workers have filed for unemployment benefits, according to the Minnesota Department of Employment and Economic Development

In Cook County about 41% of jobs are in leisure and hospitality. As a result, nearly 35% of the workforce has applied for unemployment benefits.

Similarly, about half the jobs in Mahnomen, which has the second-highest rate of applicants, are in leisure and hospitality.

A return to business as usual

The transition back to work won’t be easy. Nobody should expect a rapid return to normal operations until we have therapeutics or a vaccine, said Sojourner, the University of Minnesota economist.

Prioritizing workplace safety will be critical to get laid-off employees back to work, he said. And in the meantime, families will need public aid to get through the crisis, like the individual stimulus checks and beefed-up unemployment that were in the federal CARES Act. Making these programs more efficient would ensure that laid-off workers get funds when they need them, Sojourner said.

“Hopefully we’ll get vaccines quickly and we’ll get testing-tracing up to scale quickly, and (hopefully) we’ll make sure we’re supporting people so there’s not this traumatic deterioration of their economic circumstances,” he said. “We might recover 80% of the way pretty quickly and pretty easily, but that still leaves us pretty far from where we were.”